What does Canada have to do with polio?

We are so close to achieving a polio-free world

Thanks to the hard work of governments, community and religious leaders, civil society and health workers, we have been able to reach some of the most remote, vulnerable and socially excluded communities with the polio vaccine.

Part of the progress achieved is due to the Canadian Government for its leadership in working to eradicate this disease, especially in Afghanistan and Nigeria. Canada made its first financial commitment to polio eradication efforts in 1987, and in 2013 pledged a landmark 5-year commitment of CAN $250 million to help with the very final push to eradicate polio.

Canada is a top donor to polio eradication. We provide support to the @WHO to increase coverage of polio vaccinations in #Nigeria#endpolio

In the next few years, we have the opportunity to make polio the second ever human disease to be eradicated; the first one being smallpox. After the launch of the Global Goals at the 70th Session of the United Nations General Assembly this September, polio eradication has the potential to be the first hallmark milestone. However, achieving a polio-free world will only be possible with Canada’s continued leadership. 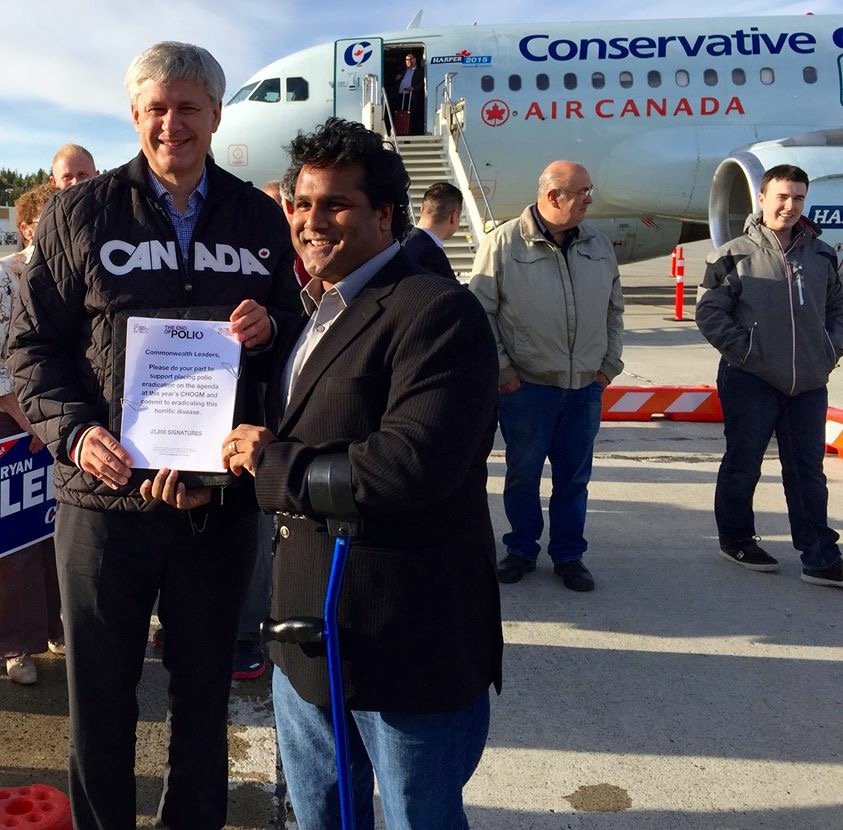 Ramesh’s story is an incredible one. He was diagnosed with polio in India when he was 6 months old, but was lucky enough to have undergone corrective surgery at the Vancouver Children’s Hospital and intensive rehabilitation after being adopted by the Anglican Bishop of Yukon and his family in 1982, becoming the first person to be internationally adopted in the Yukon Territory.

Now, he works tirelessly to see the end of polio within his lifetime. When he met with the Prime Minister, he personally handed over the Polio Petition that was part of Action Journey 3, which over40,000 global citizens have signed!

This is Ramesh’s personal message to all global citizens:

“If anyone thinks that their voices can't be heard, or the town they live in is too small it won't make a global difference, guess again!! Last night in my hometown of Whitehorse, Yukon - a place that is in a rural remote area of Northern Canada, and has a population of approximately 28,000 people - I had the honour of meeting with the Prime Minister of Canada Stephen Harper. I handed over signatures of global citizens who recently signed a petition to ensure that our Global Leaders continue to work together and commit to finishing the job of eradicating polio.

One signature, one voice at a time becomes many - and together, we will be heard by world leaders!

Thank you to the thousands of people who took time to show that we, as a global community, need to end polio. By working together we are making a global difference now matter how near or far we are from each other.”

Now, Prime Minister Harper must commit to continue Canada’s legacy as a leader in eradicating this paralyzing and deadly disease if he is re-elected as Prime MInister. It will be one of the greatest feats in world history, and we are 99.9% there.

Have you taken action to end polio yet? if not, add your voice and TAKE ACTION NOW, to ensure Canada steps up to the plate and commits to remaining a leader in polio eradication efforts.

Brought to you by