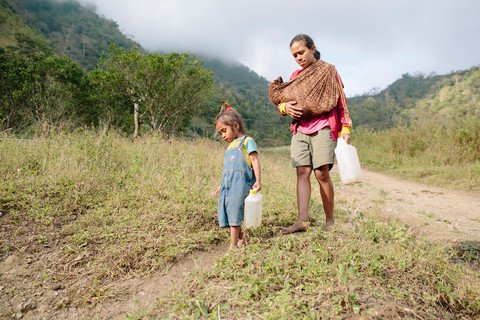 Five-year-old Fidelia lives with her mum Filomena in Laubrema village in Timor-Leste. Filomena walks over an hour every day to collect water for her family to drink and bathe in. The water is dirty and it makes her children sick, but that’s all there is — she has no other choice. And this is not an unusual story.

Last year Fidelia’s 3-year-old sister Mercia died after a serious case of diarrhoea — a health issue that those living in the developed world would never consider to be fatal. However, diarrhoea is one of the leading causes of death in children under 5 globally. This is usually caused by unsafe water and poor sanitation. Recurring bouts of diarrhoea can lead to malnutrition and, potentially, stunting of growth.

People usually associate malnutrition with not enough food. However malnutrition can also occur when there is enough food but the body, due to sickness such as intestinal worms or diarrhoea, can’t properly absorb nutrition.

One of the effects of severe and long-term malnutrition early on in a child’s life is stunting. This is when a child is shorter than is normal for his or her age. That may not immediately set off alarm bells until you realise stunting affects all areas of a child’s development including emotional, social, and cognitive functions. This condition not only stunts children's height but also their futures, as it affects their learning ability at school and earning potential as adults. This can then impact their ability to participate in their community and the local economy.

A problem in the Asia Pacific region

Two of the top 10 worst places in the world for stunting are in Australia’s very own backyard, Timor-Leste and Papua New Guinea.

Fourteen years after Timor-Leste gained independence, the nation is still suffering from a lack of infrastructure. Three in 10 people don’t have access to safe water and over half the population don’t have access to a toilet. This means people are going to the toilet in the open, resulting in fecal contamination in local water supplies; hence the unsafe water, leading to illness, malnutrition and stunting.

In fact, at a rate of 58 percent, Timor-Leste has the highest proportion of children under five who are stunted, making it the worst ranked in the world.

WaterAid is working with local organisations on the ground to help bring safe water and sanitation to those who need it most and the hardest to reach places in Timor-Leste.

Basic essentials such as safe water, access to toilets, and good nutritious food are critical in ending malnutrition and allowing children to grow up to lead healthy and productive lives.

Take action and tweet the Australian Foreign Minister Julie Bishop to invest in water and sanitation in the Asia Pacific region and help end malnutrition.