11 Striking Photos of Weather, Women, and Water From Across the World This Week

Water was a source of fear and hope for people around the world this week.

Why Global Citizens Should Care
From extreme weather events made worse by the effects of climate change to controversial sports calls rooted in sexist cultural attitude, these powerful images from around the world these week highlight the need to act on these issues. You can join us by taking action here to tackle these issues and help advance the Global Goals.

About 71% of the earth's surface is water, and though most species need it to live, this week water represented both peril and hope for many around the world.

Hurricane Florence made landfall on the southeast coast of the US this week. The storm's damage could be catastrophic for residents of both North and South Carolina, and thousands have been evacuated. In India, which has already seen devastating floods this year, monsoon season continues, interrupting daily life.

While the rain and water that accompanies these extreme weather events pose a threat to people on both hemispheres, water has also been a source of hope for some this week from environmentalists to refugees.

Migrants, hoping to find safety and opportunity, continue to make the dangerous journey across the Mediterranean Sea. And people, hoping to reverse the damaging effects of pollution and climate change, participated in coastal clean ups and other efforts to combat plastic waste in the ocean.

But this week wasn't all about forces of nature.

All eyes were on Serena Williams — a new mother and a force to be reckoned with — last weekend as she faced off with 20-year-old Naomi Osaka in the US Open final. The match was overshadowed by a conflict between Williams and the chair umpire, who the superstar player accused of sexism. And though the week began with a hit to gender equality, it ended with a win as Letitia James won the democratic primary election for general attorney in New York. If she prevails in the general election, she will become the first black woman to hold statewide elected office in the Empire State.

These are some of the most striking images from around the world this week.

1. US Open Controversy: Serena Williams talks with Naomi Osaka, of Japan, after Osaka defeated Williams in the women's final of the US Open tennis tournament, Saturday, Sept. 8, in New York. Since the dramatic US Open women's final this weekend, many male tennis players have admitted that they have called umpires far worse than "thief," supporting Williams' accusation of a double standard that was applied to her by umpire Carlos Ramos during Saturday's match. 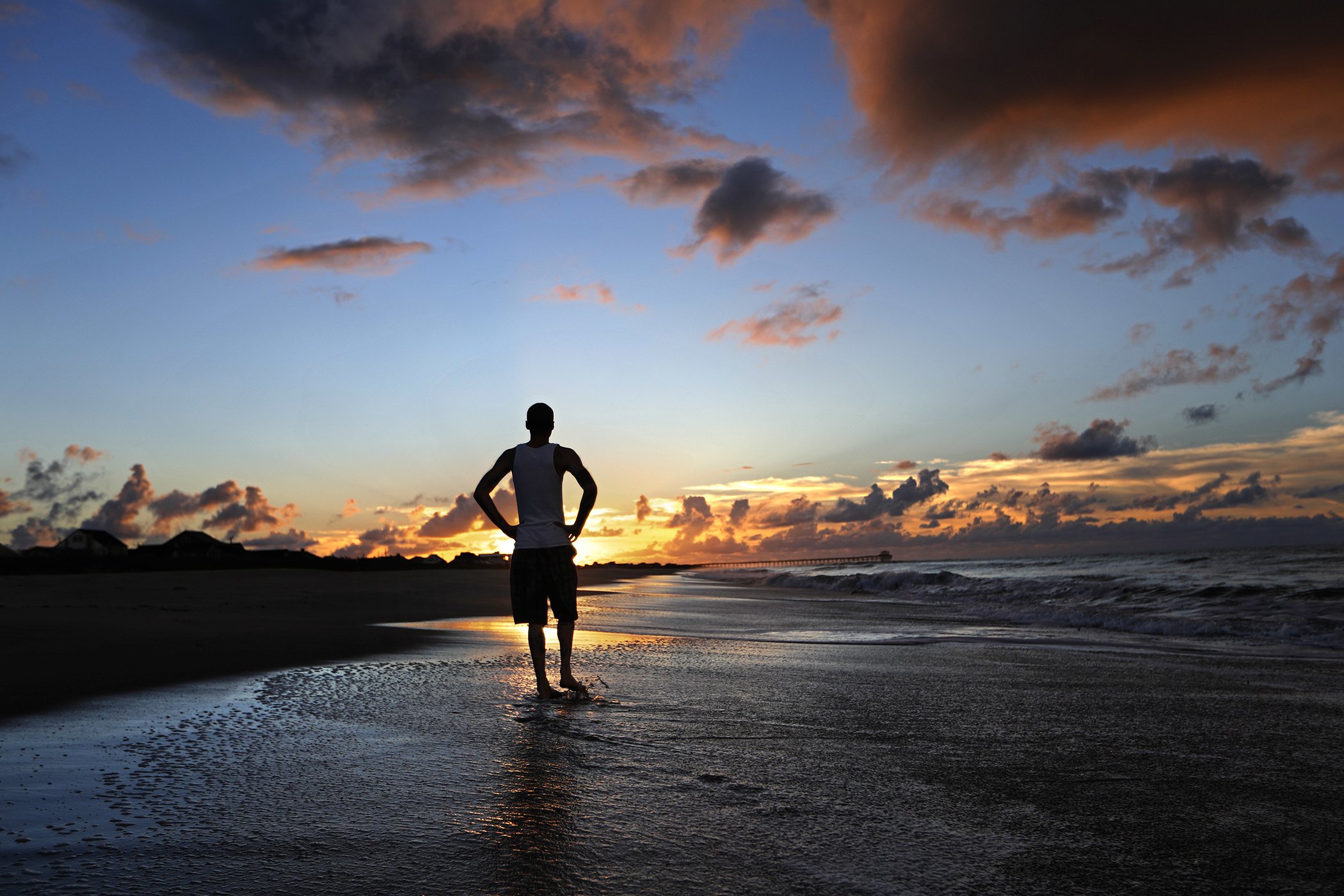 2. Awaiting Hurricane Florence: Andrew Lingle walks along the beach at sunrise as Hurricane Florence approaches the east coast in Atlantic Beach, NC, September 12. Hurricane Florence made landfall in the Carolinas early Friday, unleashing Category 1-level winds and catastrophic amounts of rain. And as climate change accelerates around the world, tropical storms are getting stronger and more destructive, putting coastal communities at risk.

3. Syrian Conflict: Syrian Hadheefa al-Shahadh, 27, sits with his children in a cave that he dug inside his house to shelter him and his family as part of preparations for any upcoming raids in the rebel-held Idlib province's village of Maar Shurin, on Sept. 11. Fearing government forces and their allies military advance to retake Idlib province, the father of three learnt from YouTube videos how to make gas masks from charcoal, wood, paper cups, cotton, nylon plastic bags, and tapes. According to him, he could manufacture more masks but the material he needs are not always available. 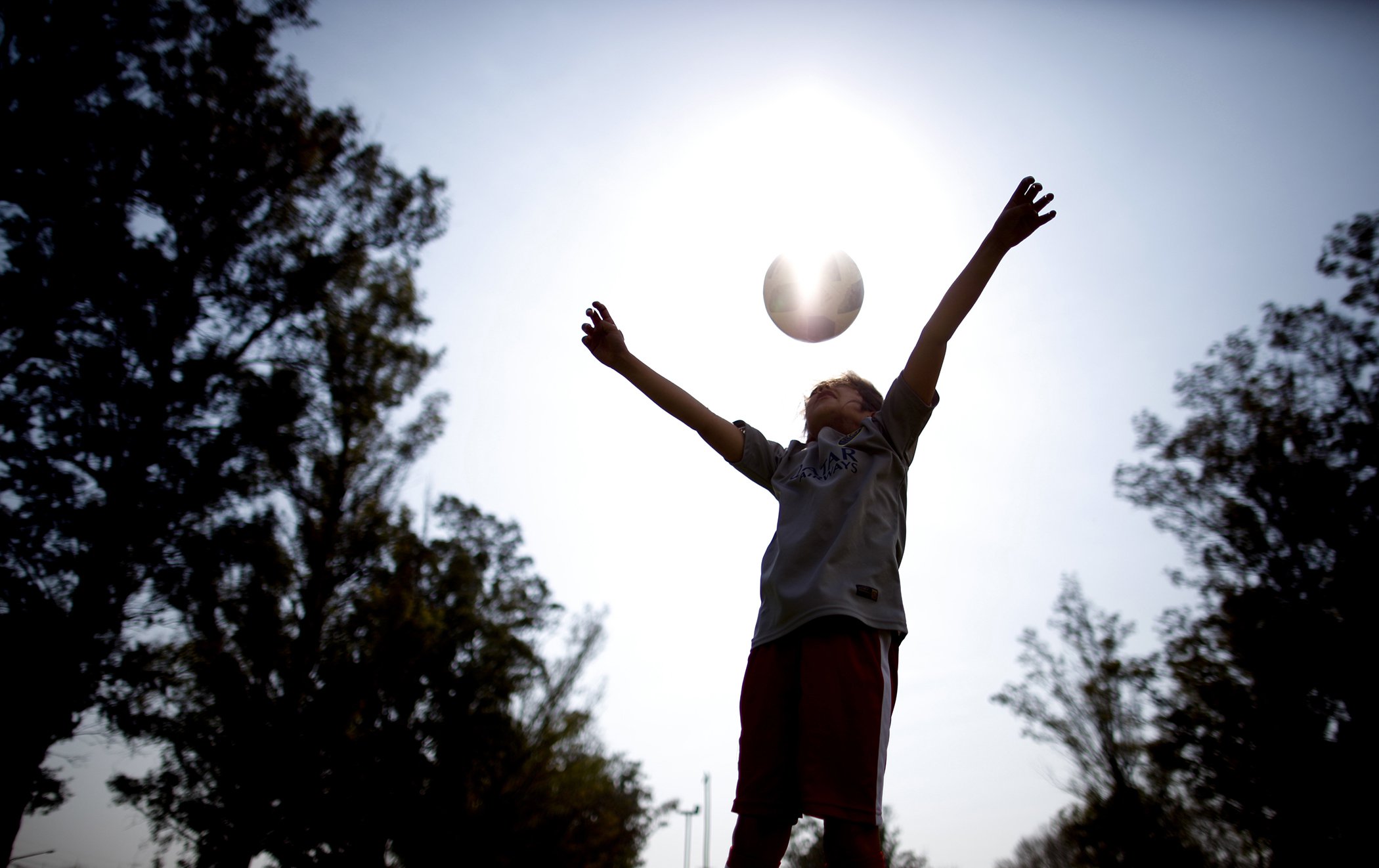 4. Argentina Girls Soccer: Candelaria Cabrera plays with a soccer ball in Chabas, Argentina, on Sept. 8. "Cande," as she is known by friends and family, is the only girl playing in a children's soccer league in the southern part of Argentina's Santa Fe province, birthplace of stars including Lionel Messi, Gabriel Batistuta, and Jorge Valdano. Two months ago, the regional soccer authorities notified Huracan that the team could no longer include Candelaria. She could only play on a girls' team, which does not exist where Candelaria lives.

5. Hurricane Florence Approaches: Michael Nelson floats in a boat made from a metal tub and fishing floats after the Neuse River went over its banks and flooded his street during Hurricane Florence on Sept. 13 in New Bern, North Carolina. Some parts of New Bern could be flooded with a possible 9-foot storm surge as the hurricane approaches the United States. 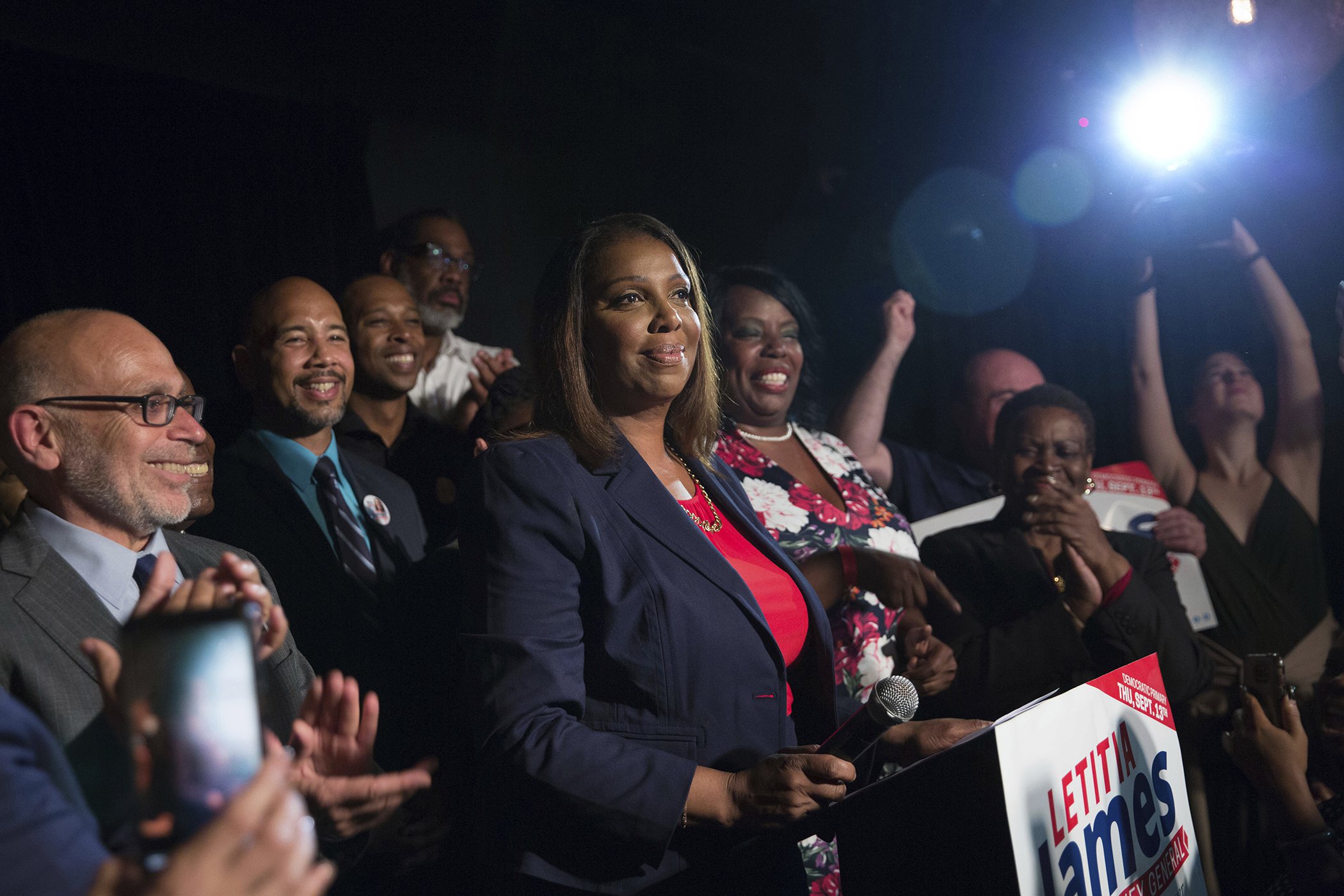 6. Historic Primary in New York: Letitia James delivers a victory speech after winning the primary election for attorney general on Sept. 13, in New York. James would become the first black woman to hold statewide elected office in New York if she prevails in the general election.

8. Mediterranean Migrants: An aerial photo shows a boat carrying migrants stranded in the Strait of Gibraltar before being rescued by the Spanish Guardia Civil and the Salvamento Maritimo sea search and rescue agency that saw 157 migrants rescued on Sept. 8. While the overall number of migrants reaching Europe by sea is down from a peak in 2015, Spain has seen a steady increase in arrivals this year and has overtaken Italy as the preferred destination for people desperate to reach the continent. Over 33,000 migrants have arrived in Spain by sea and land so far this year, and 329 have died in the attempt, according to the International Organization for Migration. 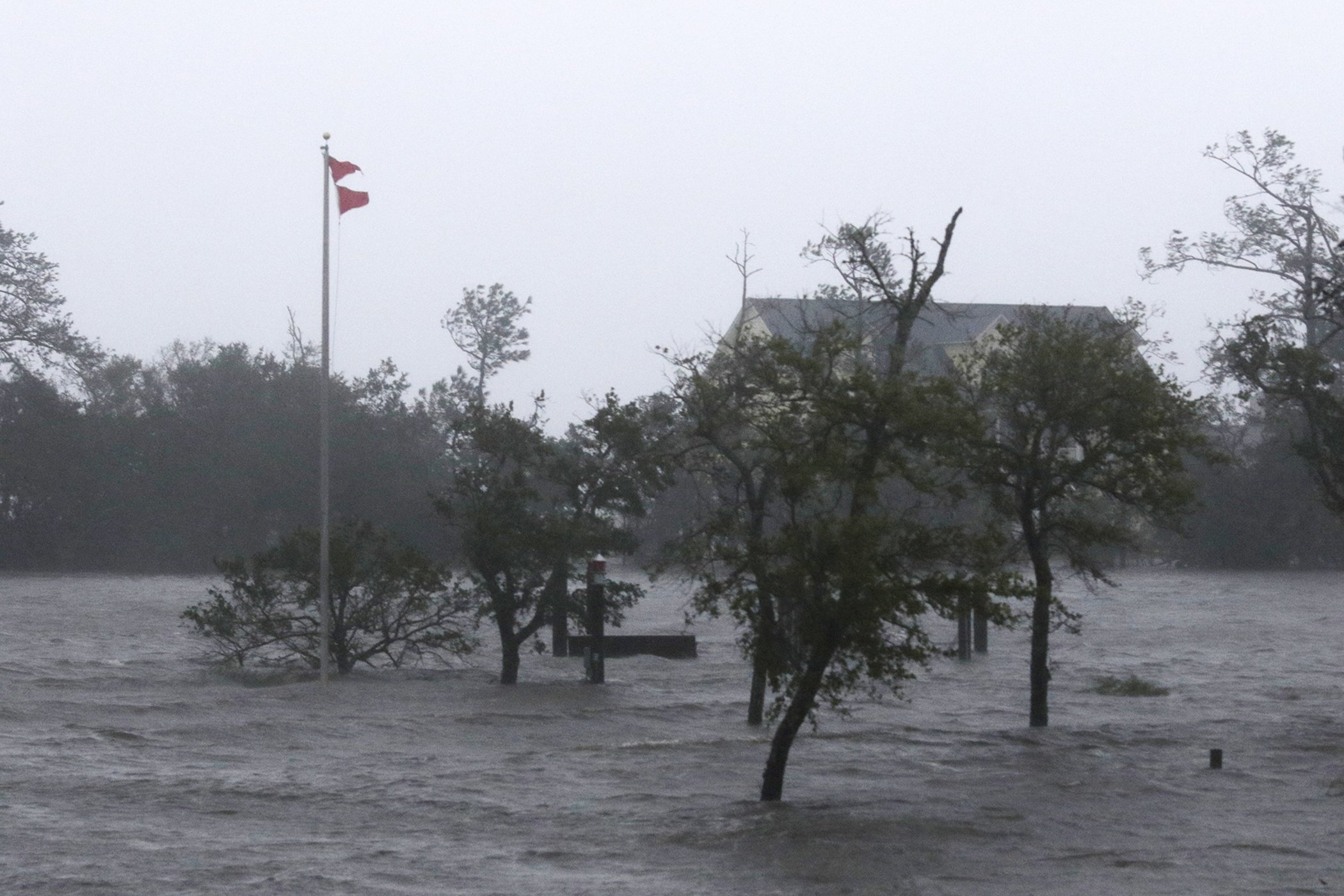 10. Monsoon Season in India: Indian children of local boatmen play atop submerged restroom at Daraganj Ghat as they bath on the flooded banks of the Ganges river in Allahabad on Sept. 11.

11. Climate Erosion in Bangladesh: A partially collapsed house stands on the banks of the Padma River at Shariatpur some 40 kilmoters south of Dhaka on Sept. 13, after aggressive erosion of land close to the river in Bangladesh. More than 2,000 houses, 500 business centers, several schools, mosques, and other establishments have been washed away by the consequences of aggressive river erosion in recent times.