These powerful images capture everything from natural disasters to democracy in action.

Why Global Citizens Should Care
From devastating natural disasters to major wins for LGBTQ rights, these photos show why it’s more important than ever to commit to achieving the Global Goals. You can join us in taking action here.

This week has been one of triumphs and struggles for communities across the globe.

Former President Barack Obama paid his respects to his friend and colleague Senator John McCain in a heartfelt eulogy on Saturday, putting politics aside. But the rest of the week saw political turmoil in the US as protesters demonstrated during the Supreme Court hearings for nominee Judge Brett Kavanaugh. Kavanaugh’s critics fear his appointment to the Supreme Court will result in the rollback of women’s rights and LGBTQ rights.

The scene in India on Thursday was dramatically different, as the country celebrated the overturning of a colonial-era ban on homosexual acts — punishable by up to 10 years in prison — marked a monumental moment for LGBTQ rights. From New Delhi to Bangalore, supporters and members of the LGBTQ community rejoiced after the law was declared “indefensible” in the country’s highest court.

"We feel as equal citizens now," activist Shashi Bhushan told CBS News. "What happens in our bedroom is left to us."

But even as India celebrates a victory for LGBTQ rights, communities across the country continue to struggle in the aftermath of this season’s extreme monsoon flooding.

India is far from the only place to experience extreme weather events and climate change recently. In California, communities have also felt the effects of a climate change as record-breaking forest fires have burned thousands of acres of land and displaced residents. And after a summer of flooding, typhoons, and heat waves, yet another natural disaster has struck Japan. At least nine people were killed in a earthquake, which caused deadly landslides in Hokkaido, Japan, on Thursday.

These are the most powerful images from around the world this week. 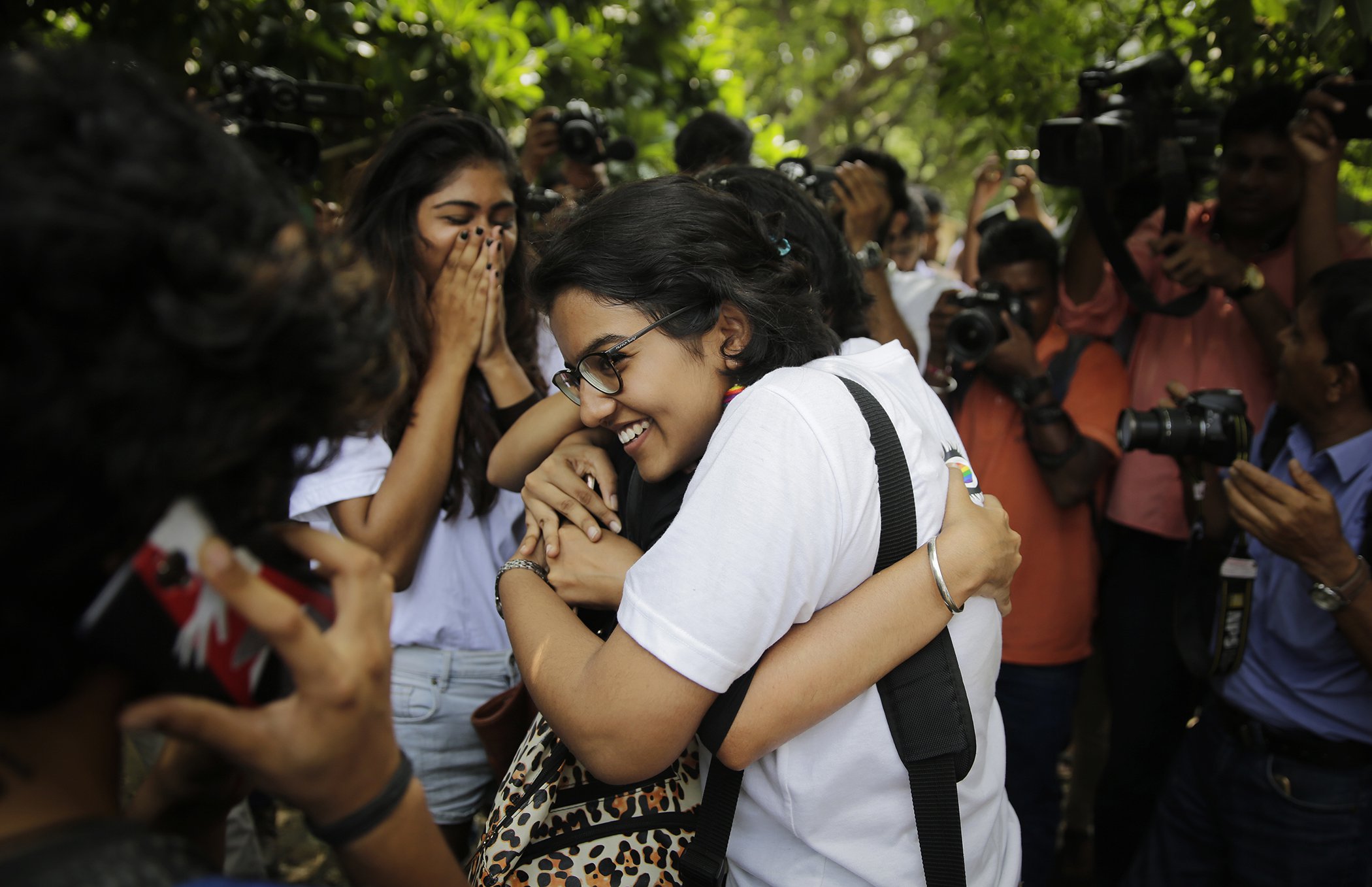 1. India Gay Rights Ruling: Gay rights activists celebrate after the country's top court struck down a colonial-era law that makes homosexual acts punishable by up to 10 years in prison, in New Delhi, India, on Sept. 6. The court gave its ruling Thursday on a petition filed by five people who challenged the law, saying they are living in fear of being harassed and prosecuted by police. 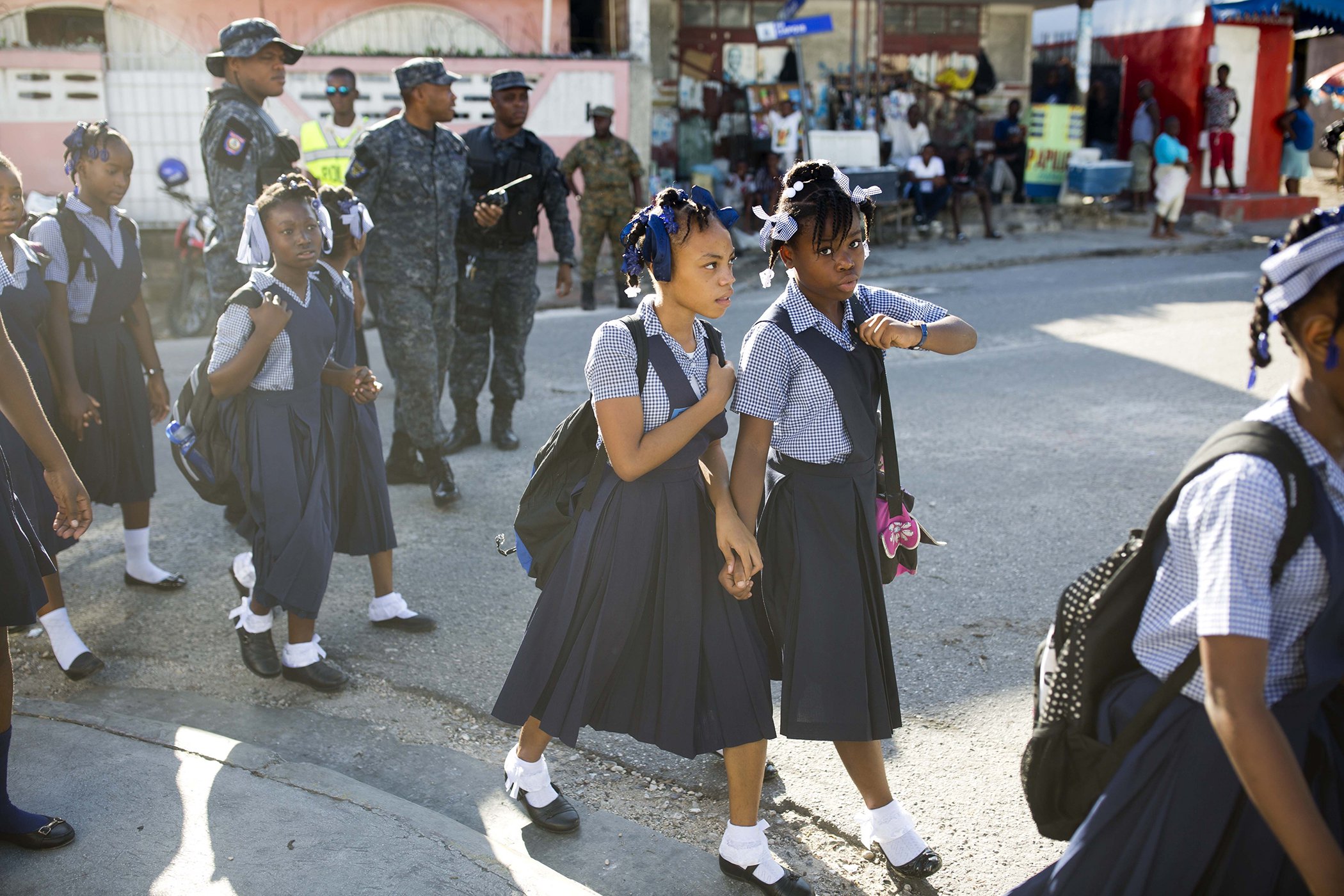 2. Starting School: Students arrive hand-in-hand to the Brazilian National School before the start of a ceremony marking the first day back to class in Port-au-Prince, Haiti, on Sept. 3. As countries around the world enter September and officially close out the summer, back to school season is finally in full swing.

3. Supreme Court Hearings: Protesters dressed in Handmaid's Tale costumes protest outside the hearing room where Supreme Court nominee Judge Brett Kavanaugh will testify before the Senate Judiciary Committee during his Supreme Court confirmation hearing in the Hart Senate Office Building on Capitol Hill on Sept. 4 in Washington, DC. President Donald Trump's newest Supreme Court nominee is expected to face punishing questioning from Democrats this week over his endorsement of presidential immunity and his opposition to women's reproductive rights. Some two dozen witnesses are lined up to argue for and against confirming Kavanaugh, who could swing the nine-member high court decidedly in conservatives' favor for years to come. Democrats have mobilized heavily to prevent his approval. 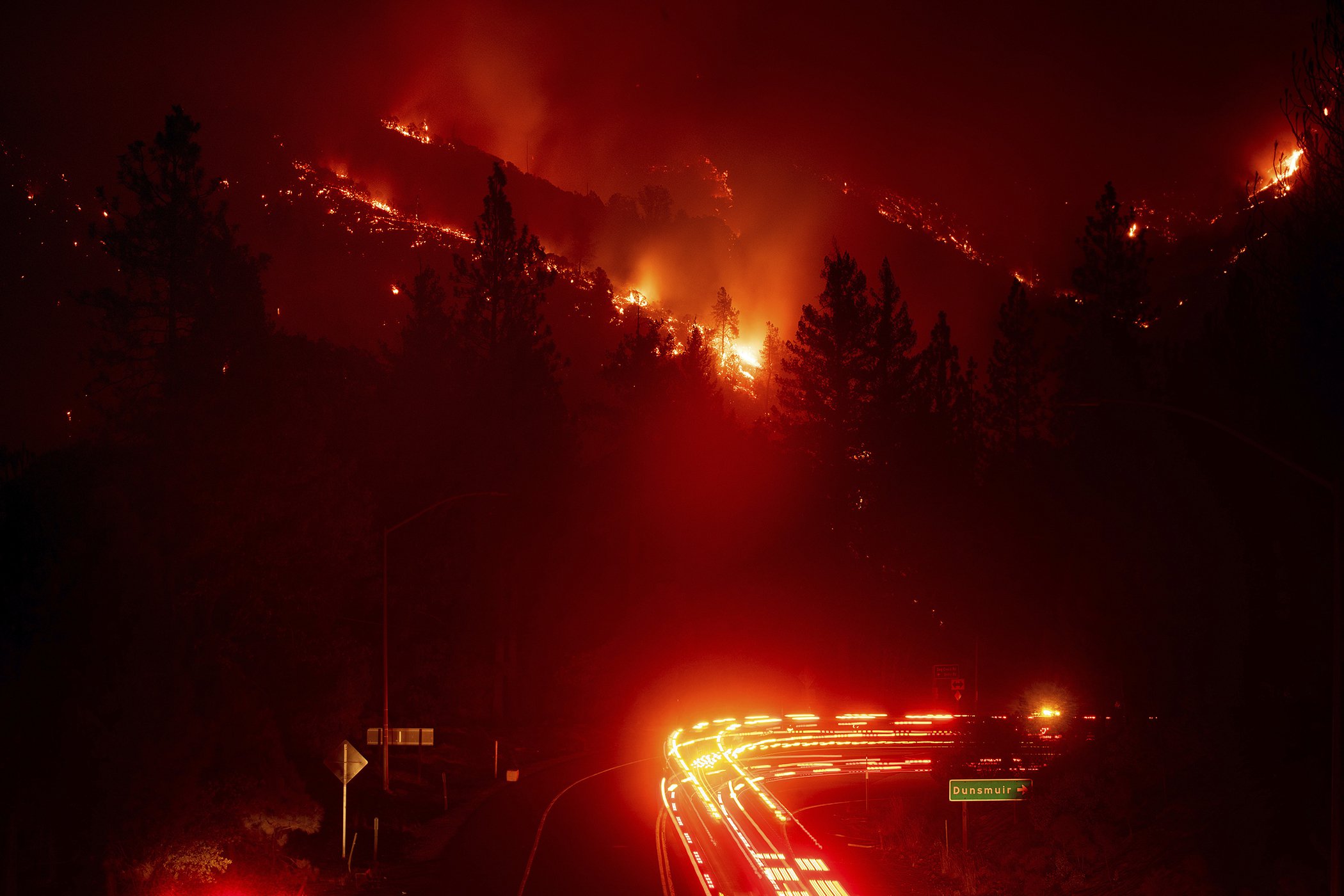 4. California Wildfires: Fire trucks pass the Delta Fire burning in the Shasta-Trinity National Forest, California, on Sept. 5. Parked trucks lined more than two miles of Interstate 5 as both directions remained closed to traffic. California has experienced a particularly punishing wildfire season this summer. Earlier this summer, the Mendocino Complex Fire broke the record for California's largest wildfire ever, burning an area the size of Los Angeles. With the fire surpassing the previous record set in 2017, the trend in California and elsewhere is clear: climate change is making forest fires more intense and longer-lasting. 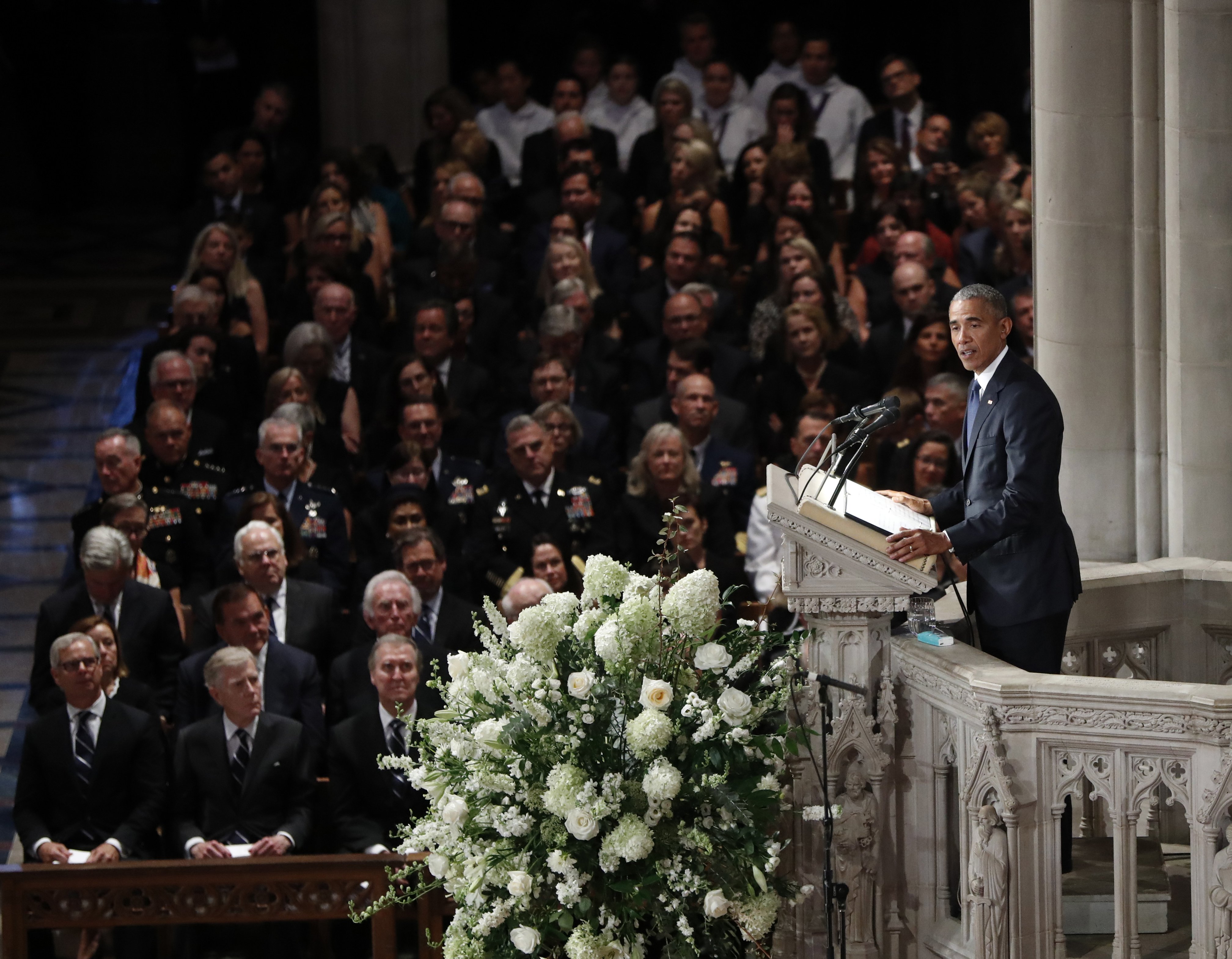 5. Obama Eulogizes John McCain: Former President Barack Obama speaks at a memorial service for Sen. John McCain, R-Ariz., at Washington National Cathedral in Washington, DC, Sept. 1. McCain died Aug. 25, from brain cancer at age 81. Political leaders from both sides of the aisle came together this past weekend to remember Sen. McCain and his impact on the country. Obama, quoting Ernest Hemingway’s For Whom the Bell Tolls, McCain’s favorite book, said, "Today is only one day in all the days that will ever be. But what will happen in all the other days that ever come can depend on what you do today.” Obama continued, "What other way to honor John McCain’s life of service than to, as best we can, follow his example? Even after his illness was diagnosed last July, Sen. McCain continued to uphold American values and speak out against injustice. McCain wasn't just an American hero, but a global citizen, too. 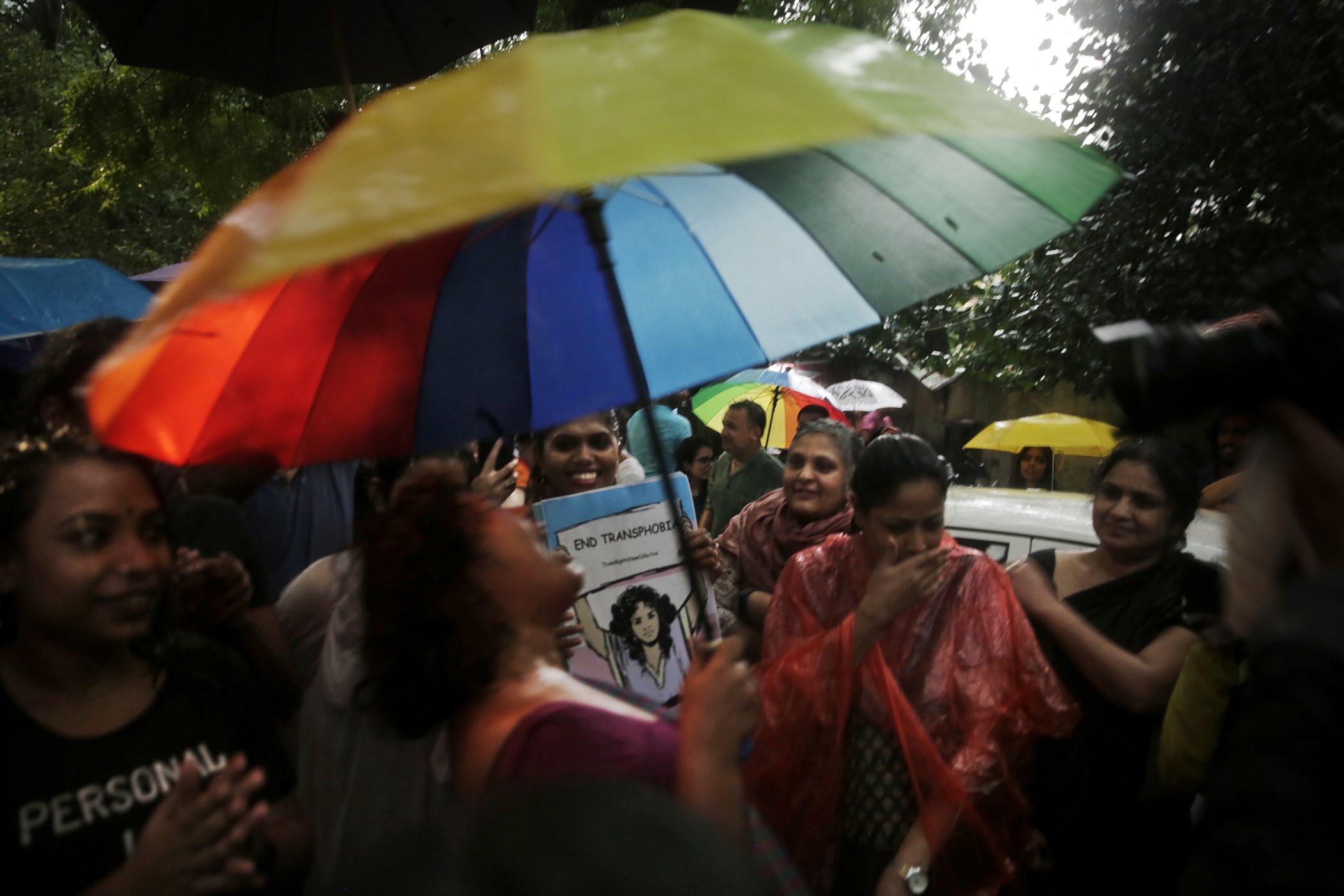 6. India's Historic Ruling: An ecstatic activist shouts slogans as they celebrate after the country's top court struck down a colonial-era law that made homosexual acts punishable by up to 10 years in prison, in New Delhi, India, on Sept. 6. The court gave its ruling Thursday on a petition filed by five people who challenged the law, saying they are living in fear of being harassed and prosecuted by police. 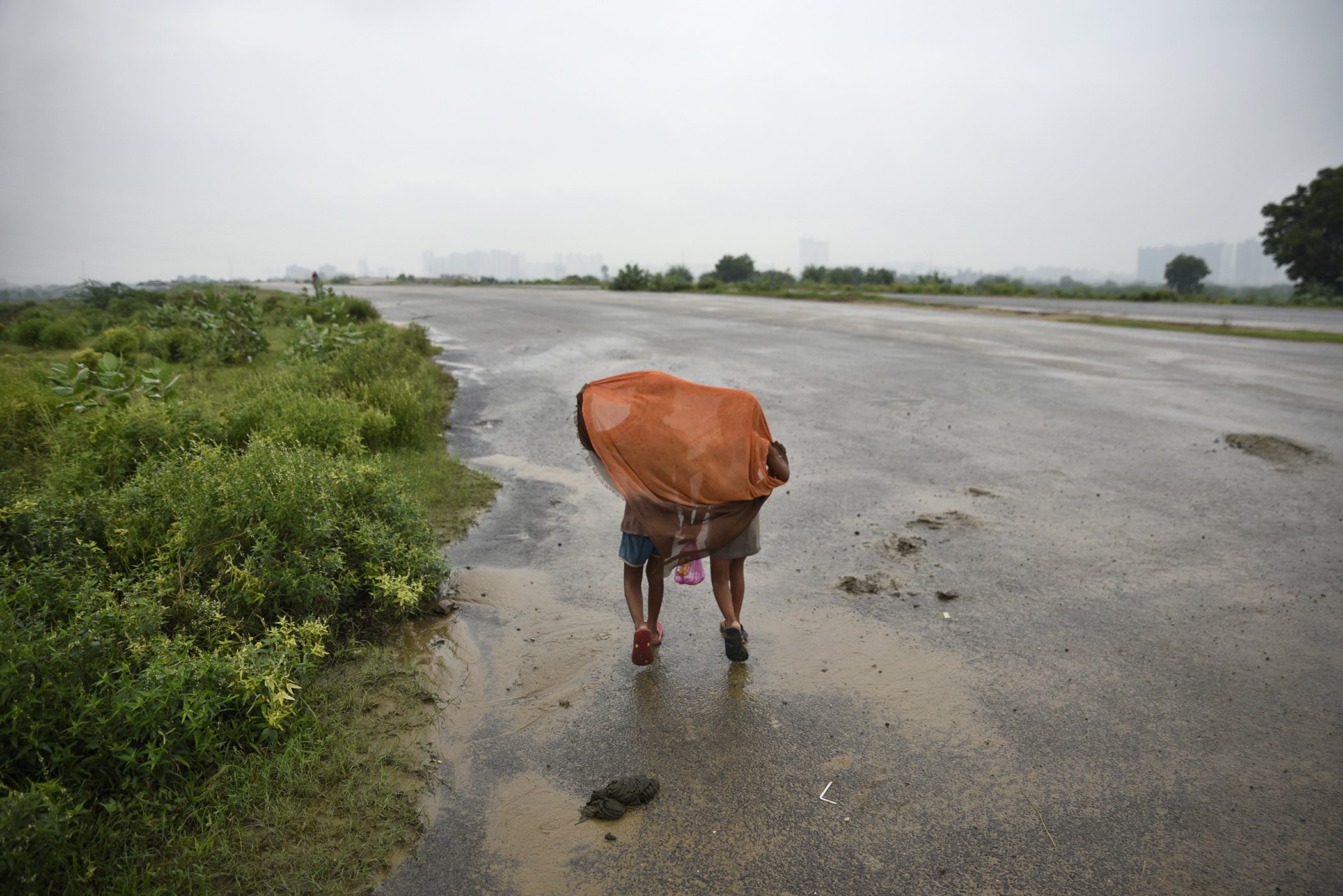 7. India Daily Life: Two Indian boys share a piece of cloth to protect themselves from the rain as they return after buying biscuits from a village shop near Greater Noida, India, on Sept. 5. India gets its annual monsoon rains from June to September.

10. Earthquake in Japan: This picture shows an aerial view of houses damaged by a landslide in Atsuma town, Hokkaido prefecture, on Sept. 6, after an earthquake hit the northern Japanese island of Hokkaido. Rescuers scrabbled through mud for survivors after a powerful earthquake sent hillsides crashing down onto homes in Japan, killing at least nine people and leaving dozens of people missing.