Clouds fill the sky over Fenway Park as the Los Angeles Dodgers practice for Game 1 of the World Series baseball game against the Boston Red Sox, Oct. 22, 2018, in Boston.
Matt Slocum/AP
Citizenship

Refugees, Protests, and Hurricanes: 11 Powerful Photos From Around the World This Week

These striking images show communities persevering in moments of crisis.

Why Global Citizens Should Care
From the refugees to protests for LGBTQ rights, these photos show why it's more important than ever to commit to achieving the Global Goals. You can join us in taking action here.

This week, people's attentions were focused on the extreme hardships that refugees and migrants from around the world are experiencing.

Fleeing violence, extreme poverty, and persecution, thousands of Central American migrants traveled north by foot, making their way to the the United States in search of safety and asylum. Many of the migrant caravan members began the grueling trek in Honduras, with their children, more than a week ago and have since made their way through parts of Mexico.

In response to the caravan, President Trump has threatened to cut foreign aid to Guatemala, Honduras, and El Salvador — a decision that could potentially escalate the problems from which the migrants are fleeing. The president has also said he plans to send military forces to the border to prevent the migrants from entering to the US.

Across the Atlantic, a large group of migrants were rescued from an inflatable boat off the coast of Malaga, Spain. Nearly 1,800 people have died while making the dangerous trip across the Mediterranean, as of October 2018.

While these groups of migrants fought for their freedom and safety, protestors gathered in Washington, DC, in to support the rights of the transgender community, after the Trump administration released a memo indicating plans to rollback transgender rights.

In Strasbourg, France, protesters took to the streets for a very different reason on behalf of the environment. The demonstrators called for a ban on single-use plastics, which was later passed in the European Parliament.

These are some of the most powerful images from across the world this week. 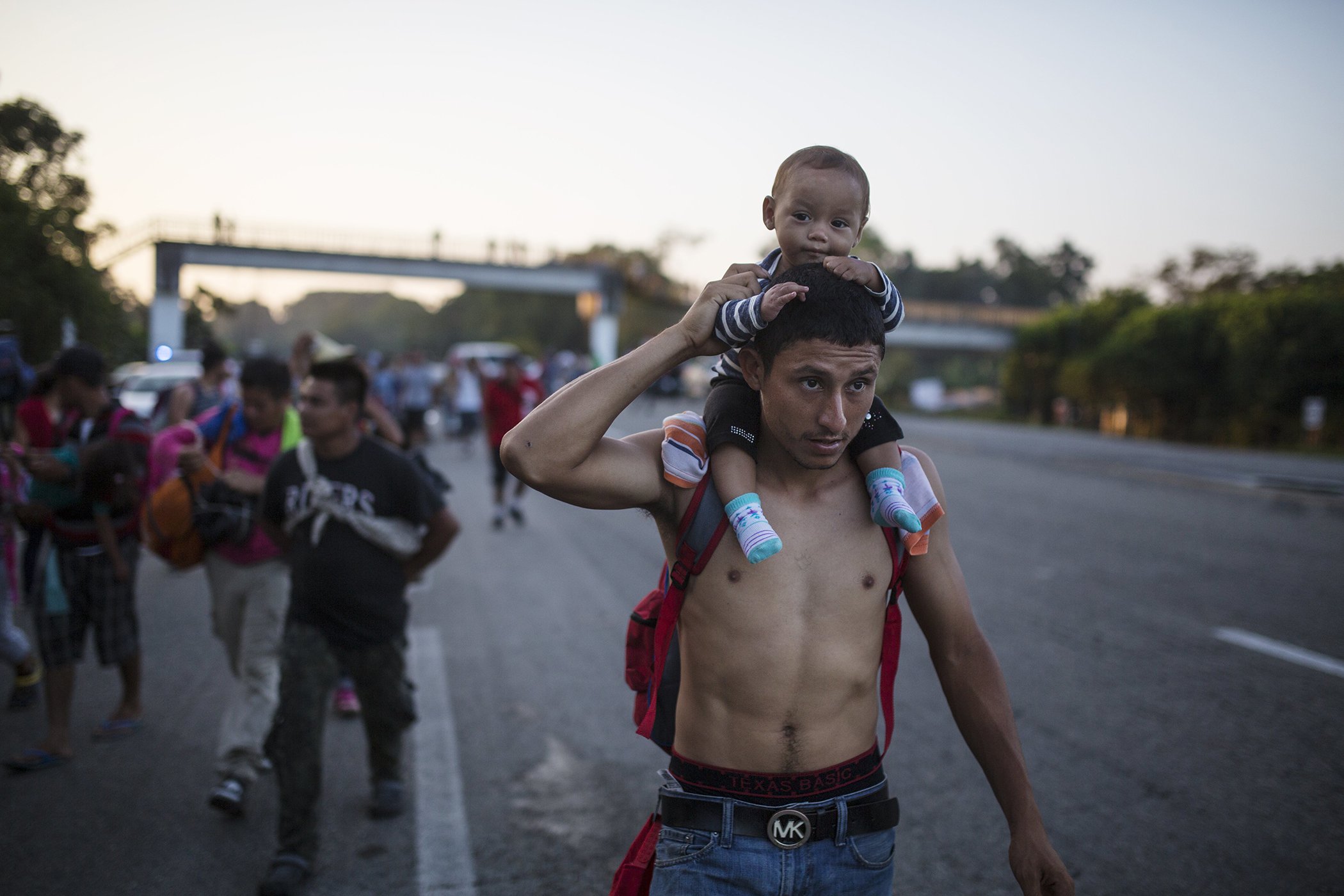 1. Migrant Caravan: Central American migrants traveling with a caravan to the US in make their way to Mapastepec, Mexico, Oct. 24. Thousands of Central Americans have been marching north as a caravan of travelers for more than a week in hopes of reaching Mexico and the US. While many of the migrants in the caravan are fleeing extreme poverty, violence, and persecution, President Trump announced plans to cut off foreign aid over the caravan. 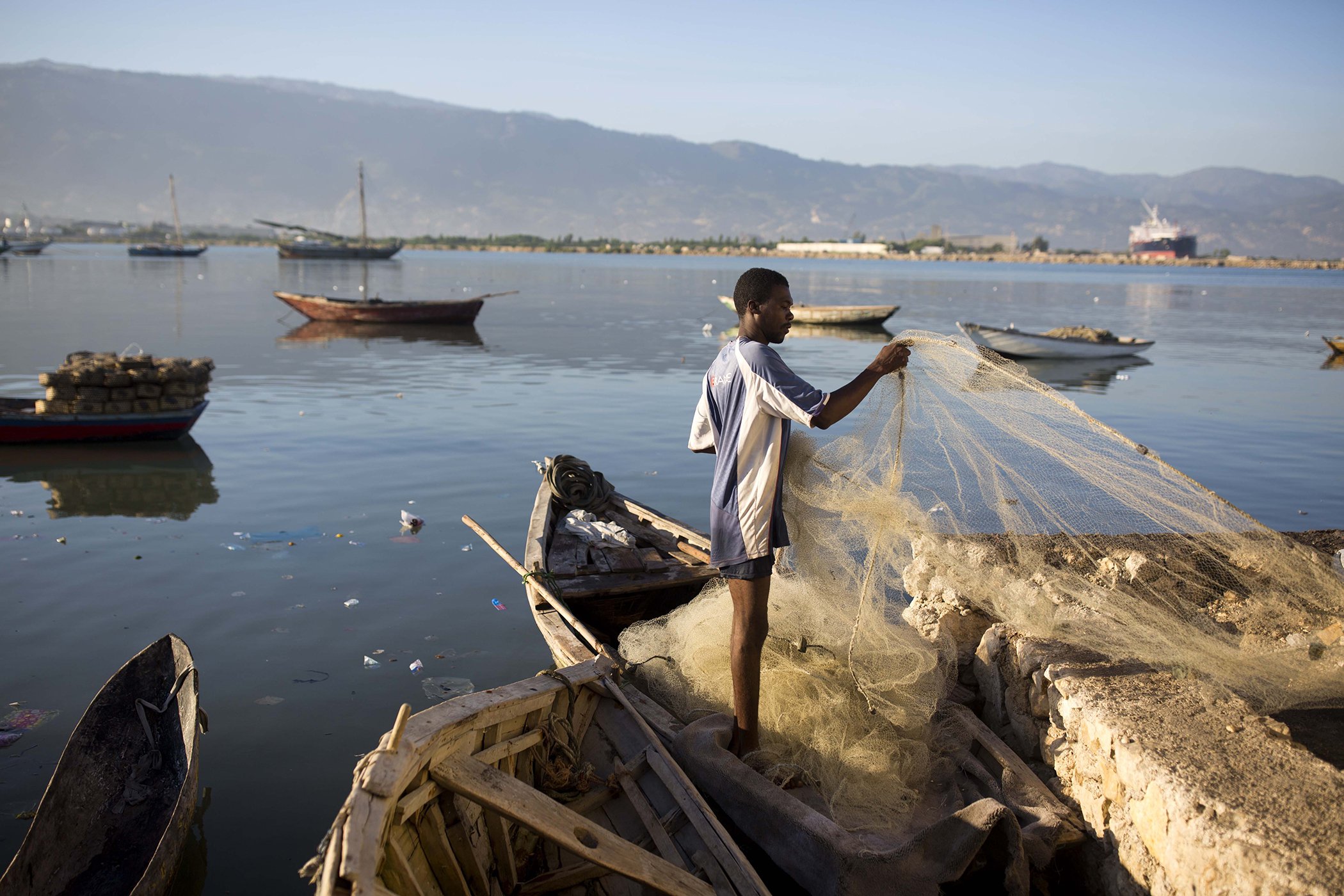 2. Haiti Daily Life: A fisherman unravels his net as he prepares to head out on his wooden boat to fish, in the waters on the edge of the Cite Soleil slum, in Port-au-Prince, Haiti, Oct. 22. According to the World Bank, Haiti remains the poorest country of the Americas and based on the most recent household survey in 2012, over 59% of Haiti’s population of 10.4 million live below the national poverty line of US $2.41 per day. 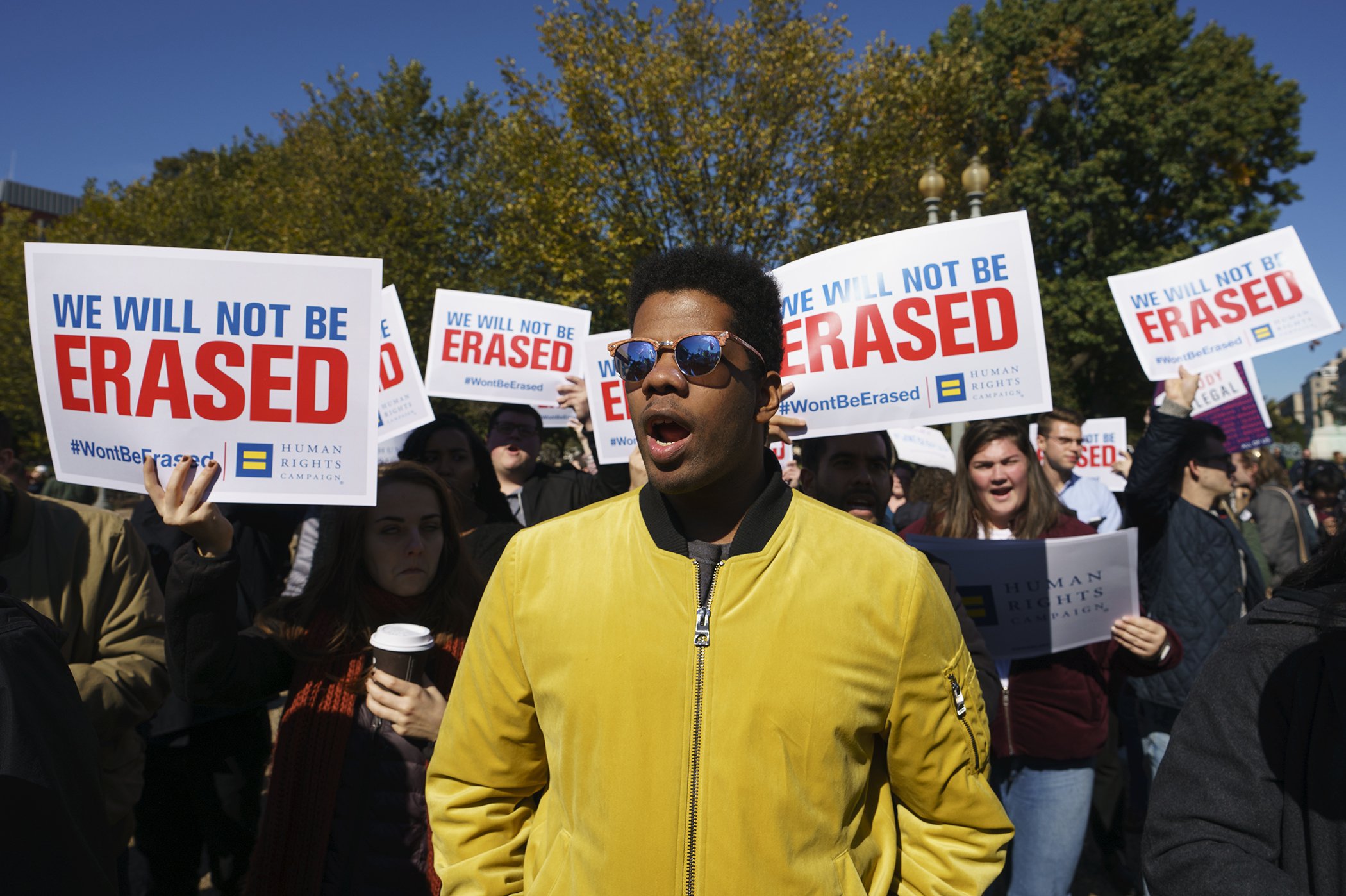 3. Transgender Rights in the US: Transgender Rights in the US: The National Center for Transgender Equality, NCTE, and the Human Rights Campaign gather on Pennsylvania Avenue in front of the White House in Washington, Oct. 22, for a #WontBeErased rally. In the wake of a report that the Trump administration is planning to roll back transgender rights in the US, the transgender community and its supporters responded by saying “We #WontBeErased.” The new, unreleased memo written by the Trump administration would require people to identify with the gender assigned to them at birth based on genitalia. The Department of Health and Human Services presented the change to include a legal definition of "sex" under Title IX, the federal civil rights law that bans gender discrimination in education programs receiving government funding. Immediately after the news came out, nonprofit organization The National Center for Transgender Equality started using the hashtag #WontBeErased to reaffirm the presence and strength of the transgender community in the US. At least 1.4 million people in the country identify as transgender. 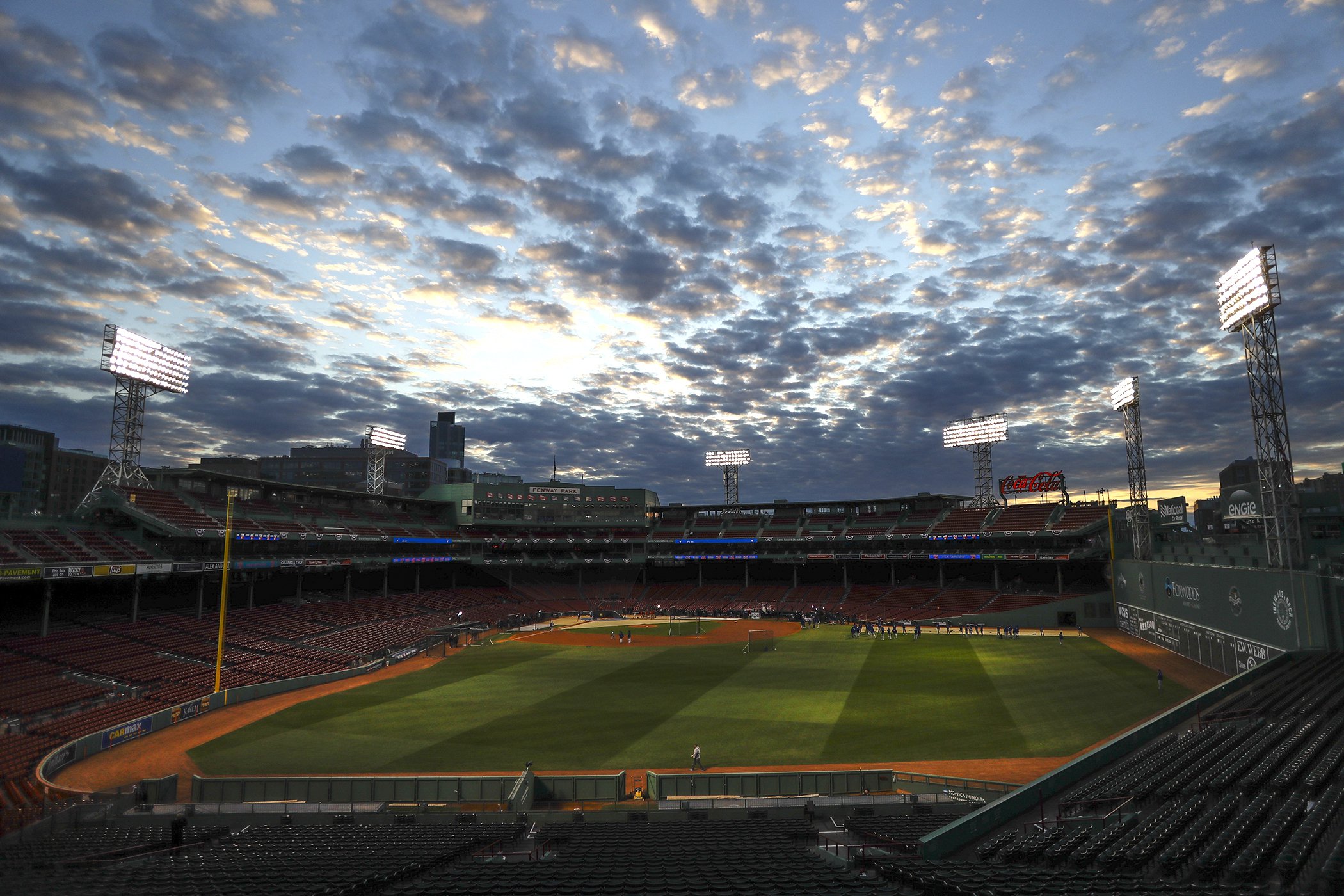 4. World Series History: Clouds fill the sky over Fenway Park as the Los Angeles Dodgers practice for Game 1 of the World Series baseball game against the Boston Red Sox Monday, Oct. 22, in Boston. The World Series made history this year as Dave Roberts of the Los Angeles Dodgers and Alex Cora of the Boston Red Sox are the two first managers of color to face off in the World Series. Major League Baseball only has four managers of color, according to Yahoo. “I don’t take a whole lot of time thinking about it,” Roberts said to Yahoo. “But when I do, as in right now, it’s special. And it’s not about myself or Alex, just to see minorities get opportunities and perform and do well, I think that gives opportunities for others."

5. Water in Gaza: A Palestinian girl drinks from a tap connected to a cistern in a poor neighbourhood in Khan Yunis in the southern Gaza Strip on Oct. 24. The US nonprofit think-tank RAND corporation estimates that 97% of drinking water in the Gaza Strip is not drinkable by any recognized international standard, and that more than a quarter of illnesses and over 12% of child deaths in the past four years were due to water pollution. 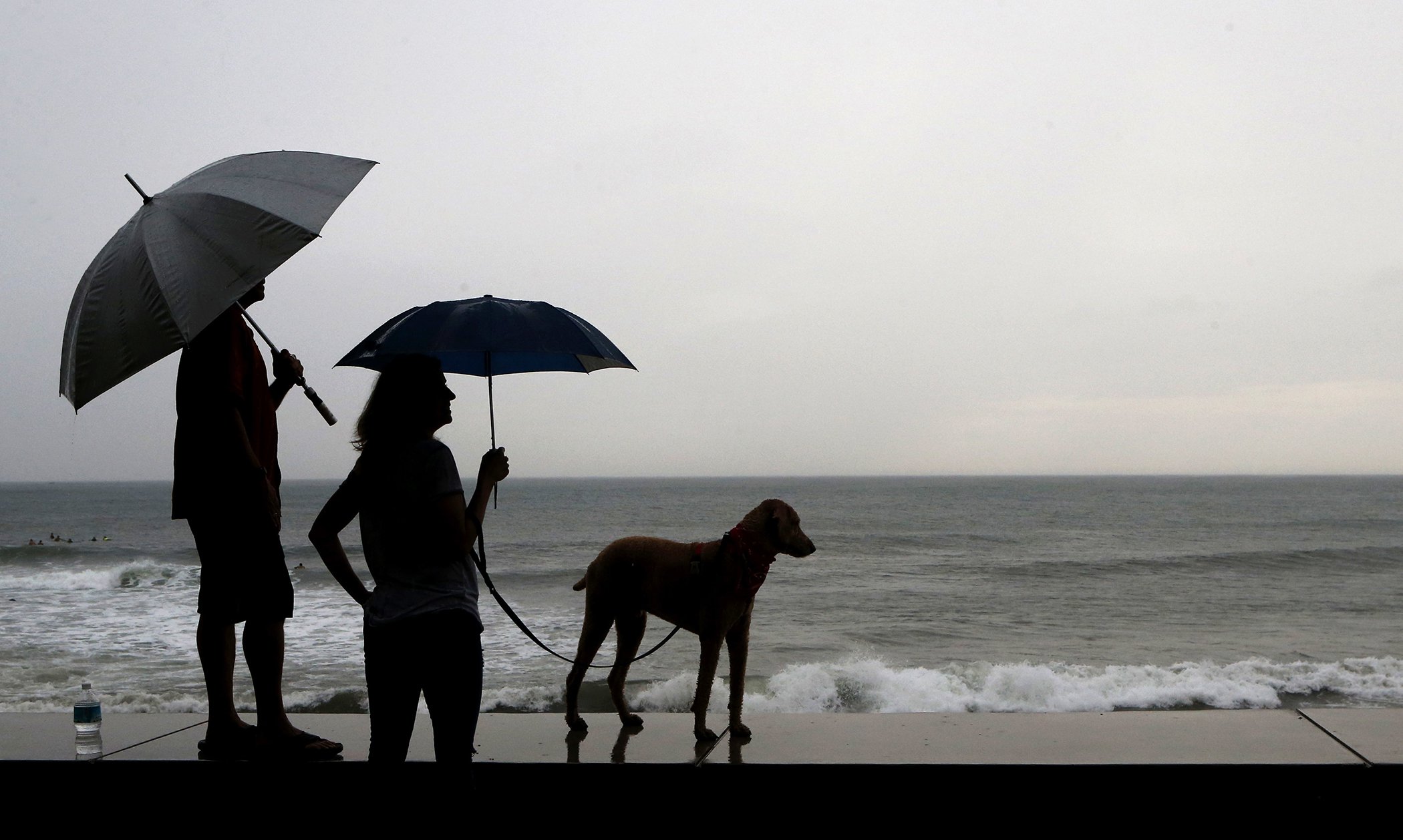 6. Hurricane Willa: A couple and their dog stand of the seawall prior to the landfall of Hurricane Willa, in Mazatlan, Mexico, Oct. 23, 2018. Emergency officials said they evacuated more than 4,250 people in coastal towns and set up 58 shelters ahead of the dangerous Category 3 storm.

9. Environmental Protest: People take part in a demonstration in front of the European Parliament on Oct. 23 in Strasbourg, eastern France, prior to a vote on the ban on the sale of single-use plastic items such as plates, cutlery or cotton buds, making up over 70% of marine litter.

10. Immigration in the Americas: A Honduran migrants taking part in a caravan heading to the US, takes a bath in the Mapastepec river, in Mapastepec, Chiapas state, Mexico, on Oct. 24. Thousands of mainly Honduran migrants heading to the United States, a caravan President Donald Trump has called an 'assault on our country', continued their march to the US after one-day rest in Huixtla, Chiapas state in Mexico.

11. Royals in Fiji: Meghan, Duchess of Sussex visits the University of the South Pacific on Oct. 24 in Suva, Fiji. The Duke and Duchess of Sussex are on their official 16-day Autumn tour visiting cities in Australia, Fiji, Tonga and New Zealand. Meghan Markle is speaking out for women's rights yet again – this time for girls' education. While visiting the University of the South Pacific in Fiji, Markle said, "Everyone should be afforded the opportunity to receive education that they want but, more importantly, the education that they have the right to receive. And for women and girls in developing countries, this is vital."