A woman and her child look at the digital fishes at an audio-visual art installation titled "Ocean Dive" during the Aquarium by Naked exhibition held at the Guardian Art Center in Beijing, Aug. 12, 2018.
Andy Wong/AP
NewsCitizenship

Monsoons, Baby Turtles, and Meteors: 14 Stunning Photos From Around the World This Week

These powerful images capture everything from refugees to meteor showers.

Why Global Citizens Should Care
From historic wildfires to deadly flooding to conservation efforts, these photos show why it’s more important than ever to commit to achieving the United Nations’ Global Goals. You can join us in taking action on this issue here.

Cyprus' efforts to revive the Green and Loggerhead turtle populations have reportedly been successful. Previously endangered, these turtle populations are now growing in number and thriving once again in the Mediterranean Sea — where they have lived for 10,000 years.

Meanwhile, wildfires persist in California, burning thousands of acres in both southern and northern parts of the state. The Holy Fire near Lake Elsinore is 83% contained as of Friday. More than 1,000 firefighters continue to battle the 22,986 acre blaze in the Cleveland National Forest, and the man accused of starting the fire faces felony charges.

Elsewhere in the state, the Mendocino Complex Fire has surpassed the Thomas Fire as the largest wildfire in California’s modern history. Hot, dry conditions and 15- to 25-mile per hour evening winds have fueled the blaze’s explosive growth, reports the Los Angeles Times. The location, terrain, and erratic nature of the Mendocino Complex Fire puts firefighters at high risk. A firefighter from Utah died while on duty Tuesday.

In the Democratic Republic of Congo, Ebola is expected to spread, according to the World Health Organization (WHO), and at least 1,500 people could be exposed to the virus. The situation is made worse by political instability and active conflict in the area.

In other events this week, protesters in Charlottesville, Virginia, called for social justice and racial equity as they marked the anniversary of 2017's violent Unite the Right rally.

Here are 14 of the best photos from this week. 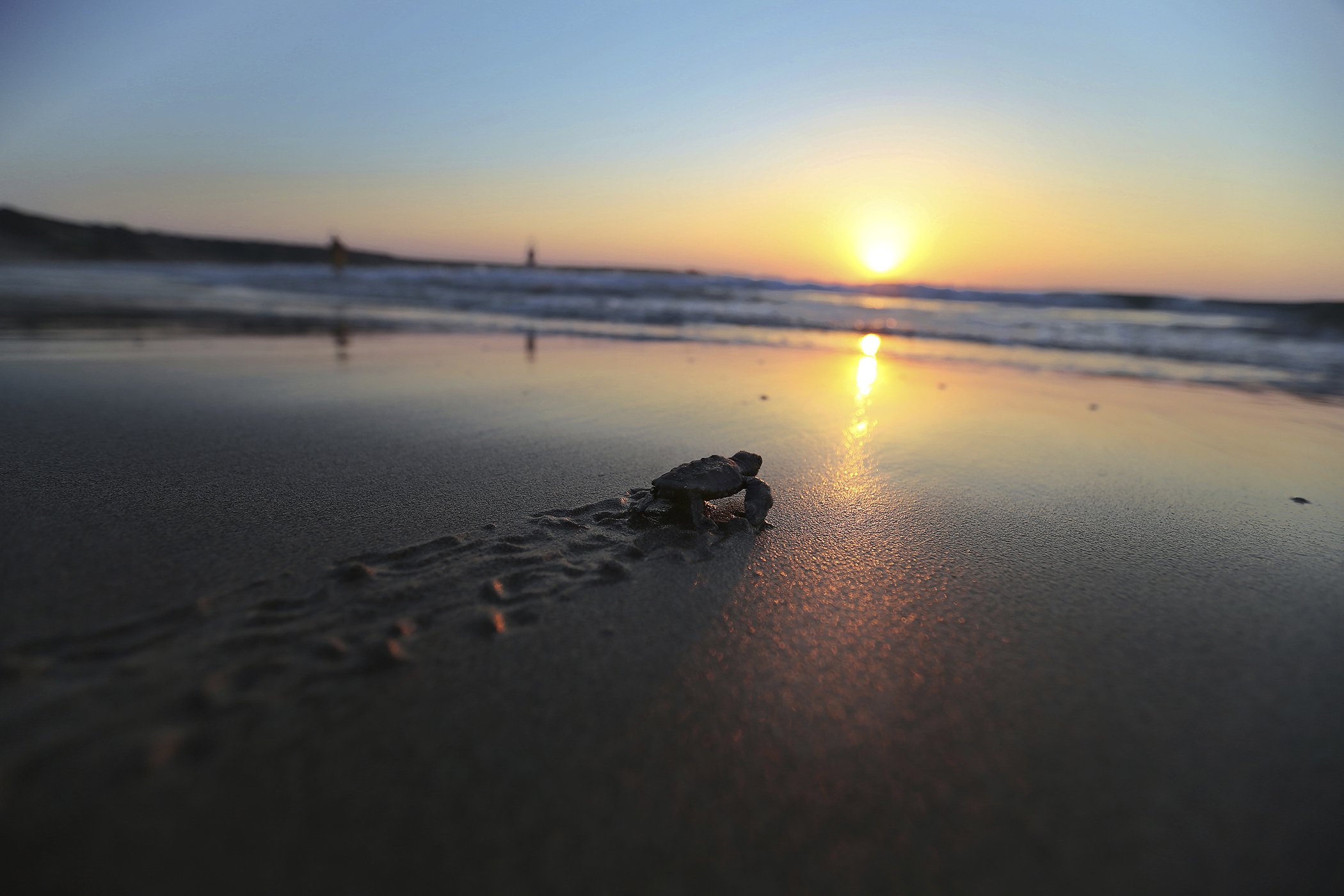 1. Turtle Conservation: A sea turtle, soon after hatching, strains against the surf to reach the waters of the Mediterranean Sea as the sun sets on Cyprus' protected Lara beach on Aug. 10. Cyprus' Green and Loggerhead turtles have made a strong comeback thanks to pioneering conservation efforts stretching back decades, after being hunted to near extinction in the first half of the last century.

2. California Wildfires: A helicopter drops water to a brush fire at the Holy Fire in Lake Elsinore, California, southeast of Los Angeles, on Aug. 11. The fire has burned 21,473 acres and was 29% contained as of 8:30 a.m. Saturday, according to the Cleveland National Forest.

3. Niger Daily Life: A group of men belonging to the Fulani tribe from Niger perform a traditional dance as part of a welcoming ceremony upon the arrival of a United Nations flight in the airport of Maradi, Niger, on Aug. 16. Several UN agencies along with the government of Niger and other partners visited the agropastoral Maradi region of Niger to understand the context and local priorities, especially the needs of women and other vulnerable groups in the area. In Niger, as in many other parts of the Sahel, climate shocks have resulted in recurring droughts with devastating impacts on the region's already vulnerable populations. 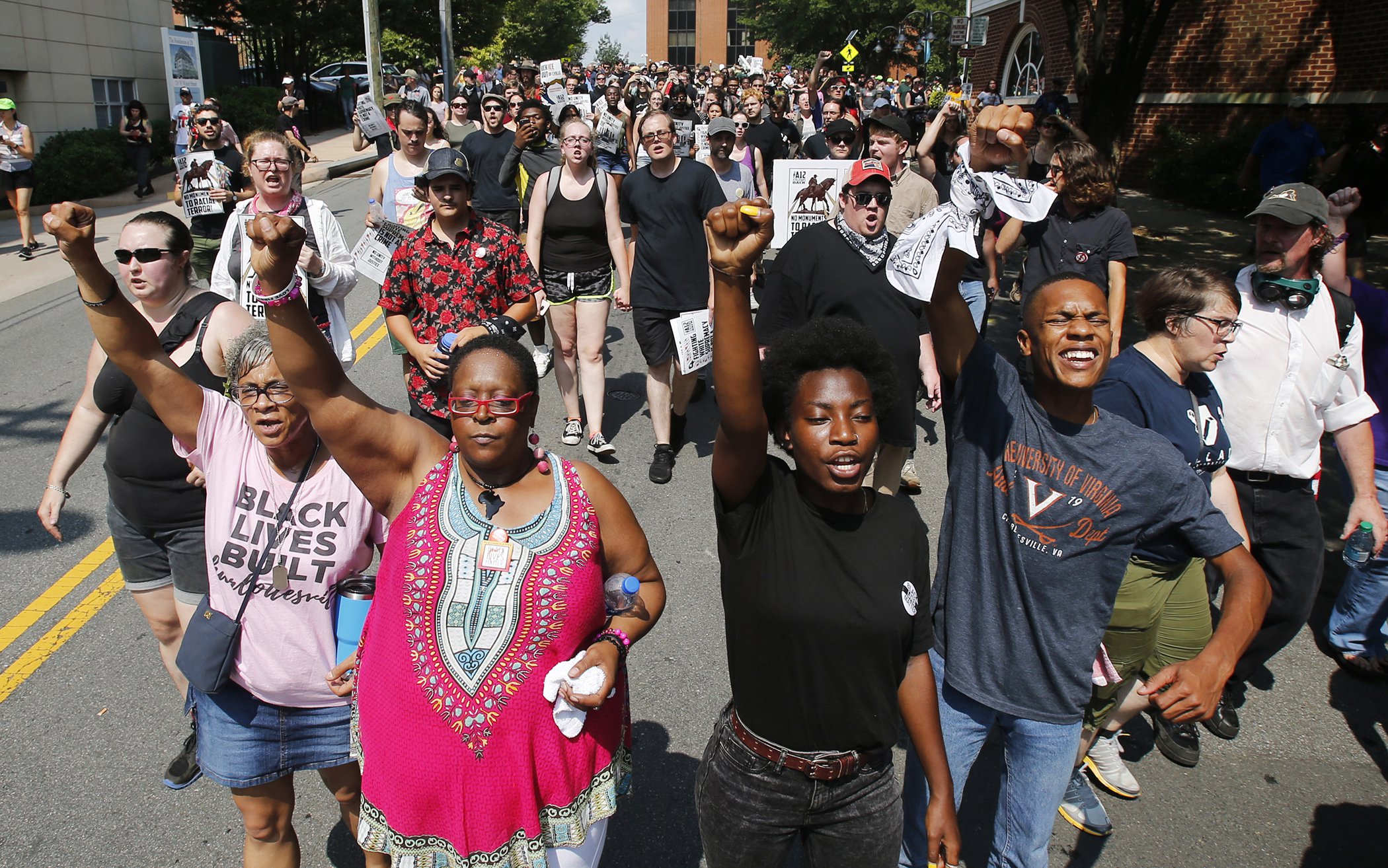 4. Charlottesville Anniversary: Demonstrators against racism march along city streets as they mark the anniversary of last year's Unite the Right rally in Charlottesville, Virginia, Aug. 12. Peaceful protests took place this year, on the one-year anniversary of the white nationalist Unite the Right rally erupted in violence in 2017, leaving dozens injured and one counter-protester, Heather Heyer,  dead. 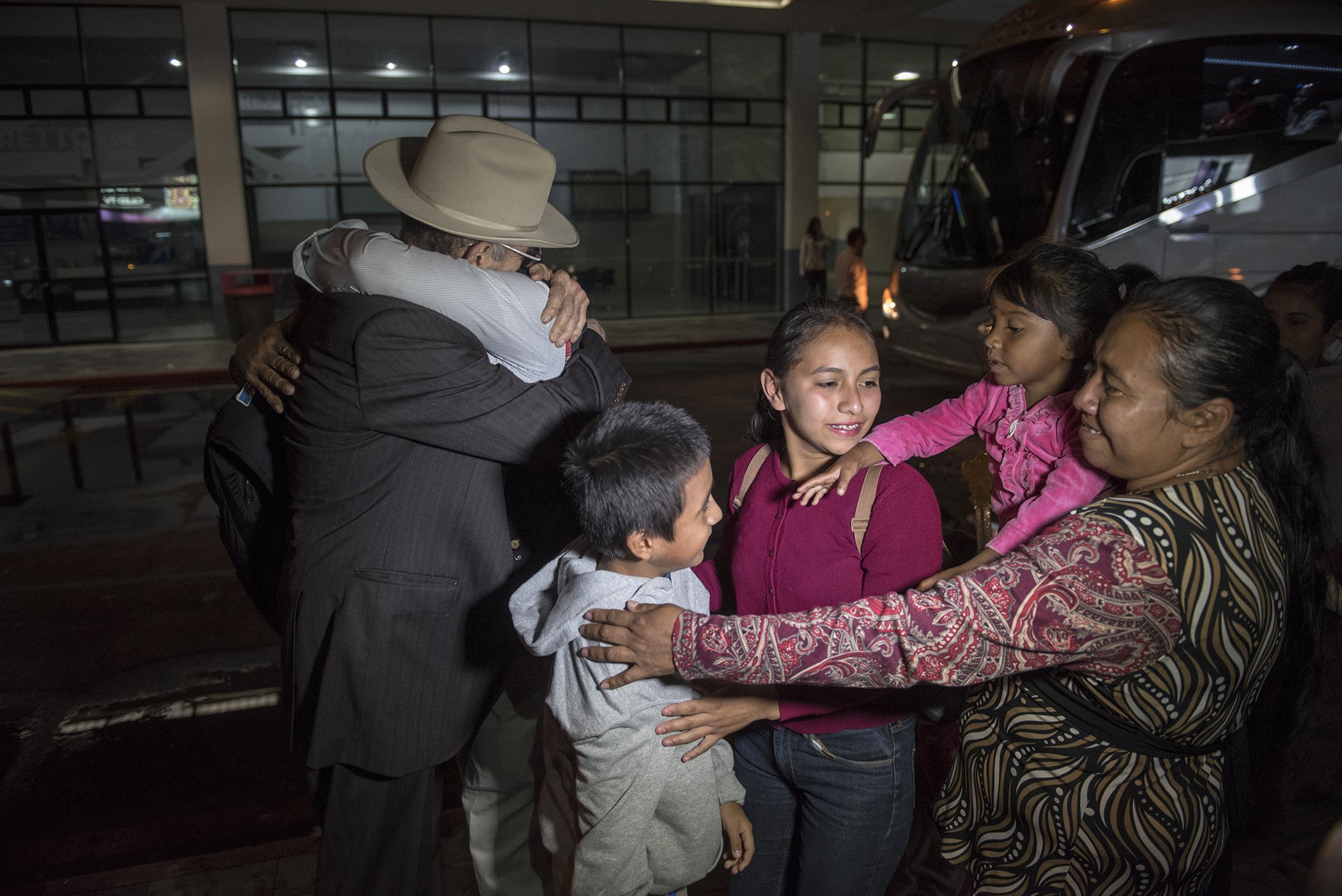 5. Family Separations in the US: Relatives greet to Anthony David Tovar Ortiz, center, after arriving to La Aurora airport in Guatemala City, Tuesday, Aug. 14. The 8-year-old stayed in a shelter for migrant children in Houston after his mother Elsa Ortiz Enriquez was deported in June 2018 under President Donald Trump administration’s zero tolerance policy. 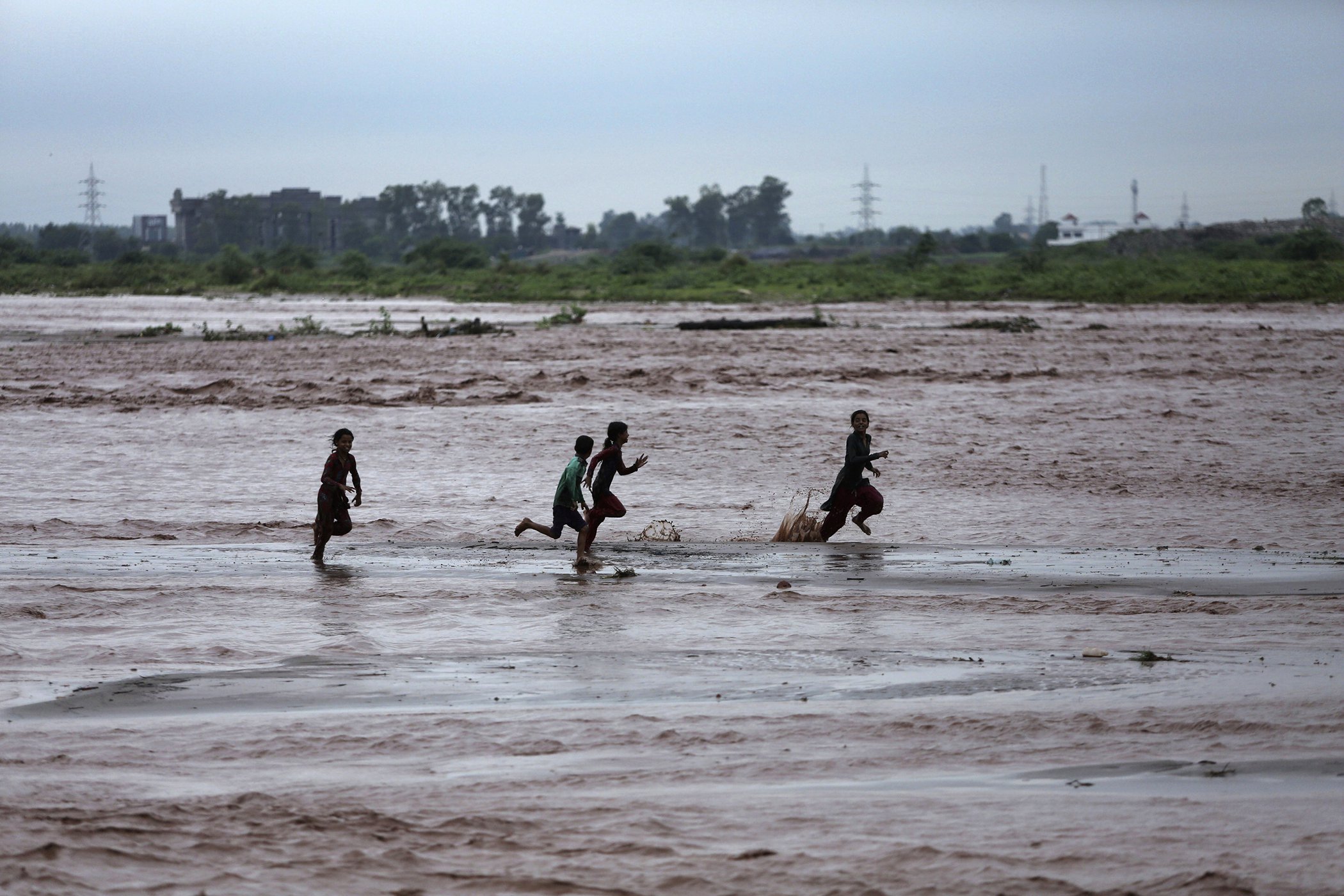 6. Monsoon Season in India: Indian children play a flooded bed of the river tawi due to monsoon rains in Jammu, India, on Aug. 13. Heavy downpours and widespread flooding have devastated India this monsoon season. In the southern Indian state of Kerala, more than 100 people were killed as torrential rains caused flooding and landslides.

7. Effects of Climate Change in Tuvalu: Children jump off a shipwreck into the lagoon on Aug. 15 in Funafuti, Tuvalu. The ship was the victim of a cyclone and now sits on the shoreline. The small South Pacific island nation of Tuvalu is striving to mitigate the effects of climate change. Sea levels are rising at a rate of 5 millimeters per year since 1993, well above the global average, damaging vital crops and causing flooding in the low lying nation at high tides. Sea water rises through the coral atoll on the mainland of Funafuti and inundates taro plantations, floods either side of the airport runway, and affects peoples homes. 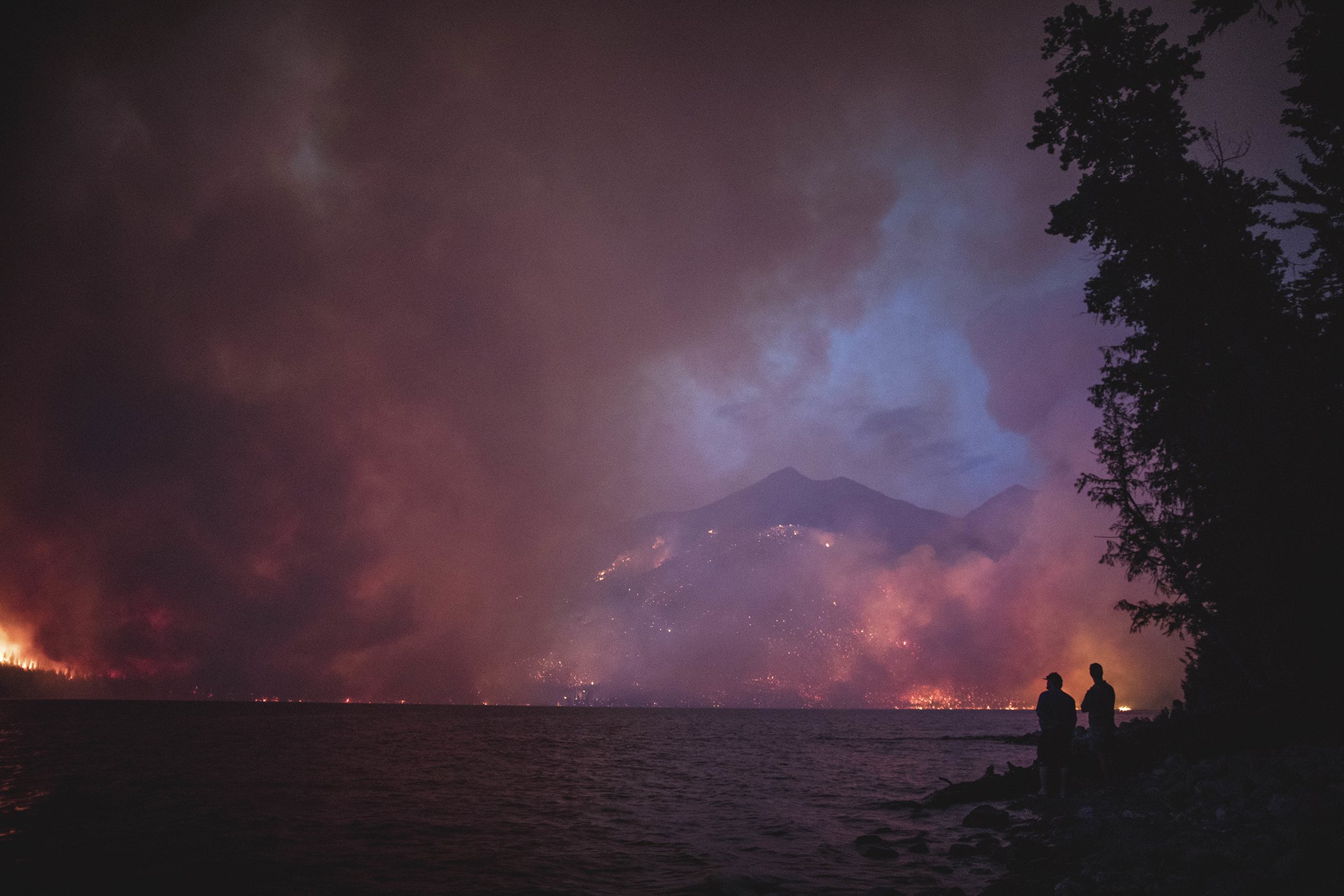 8. Wildfires in the Western US: The Howe Ridge Fire is seen from across Lake McDonald in Glacier National Park, Montana, on Aug. 12, in this photo provided by the National Park Service. A wildfire destroyed structures and forced evacuations Monday from the busiest area of Montana's Glacier National Park, as officials in California prepared to reopen Yosemite National Park Tuesday following a nearly three-week closure at the height of the summer season. 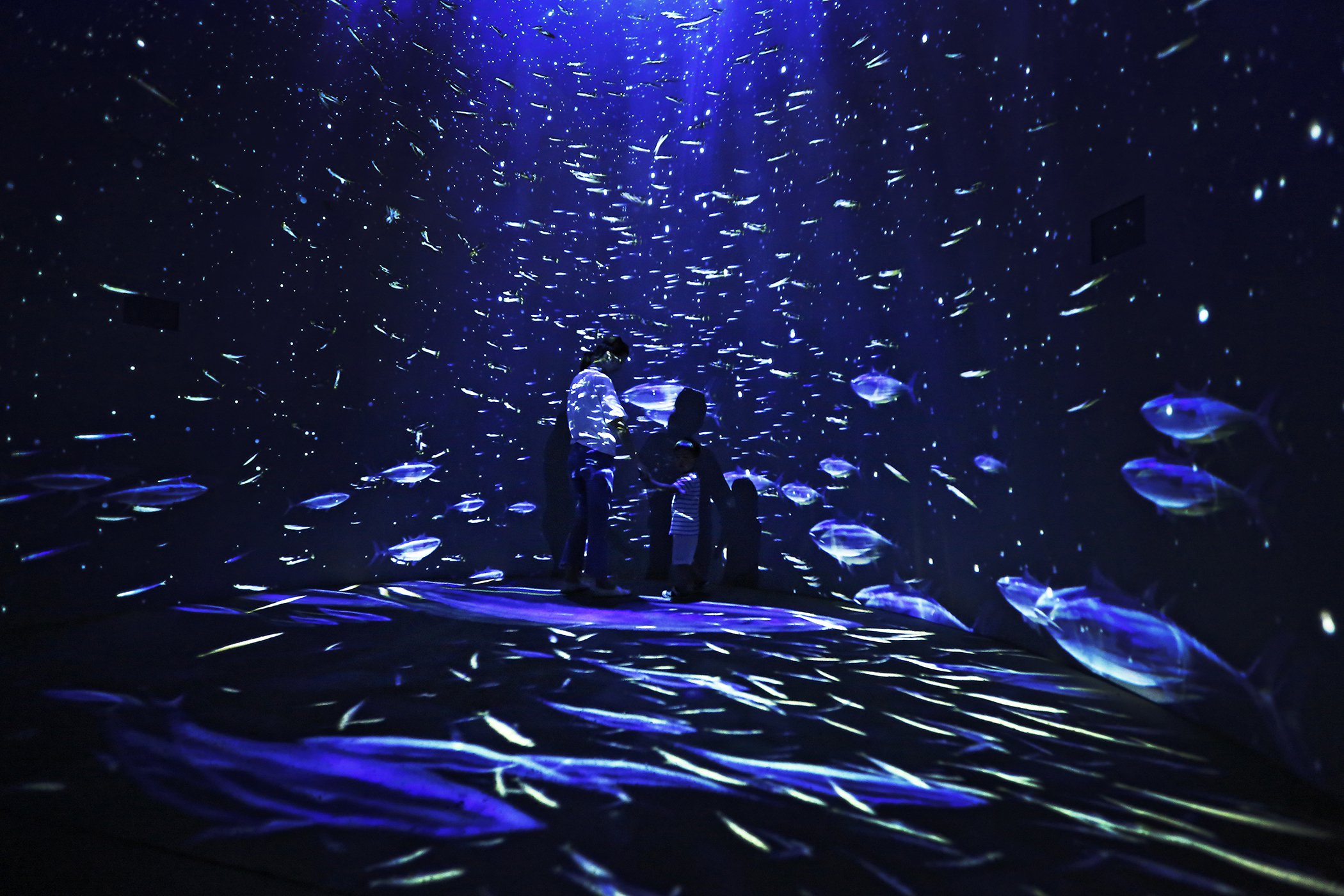 9. Ocean Exhibition in China: A woman and her child look at the digital fishes at an audio-visual art installation titled "Ocean Dive" during the Aquarium by Naked exhibition held at the Guardian Art Center in Beijing on Aug. 12. The digital art exhibition Aquarium by Naked presented by Japanese artist Ryotaro Muramatsu, Naked Inc. aims to bring visitors through a virtual undersea world through a combination of light projections and video mapping.

12. Meteor Shower: A Perseid meteor is seen over Rocky Mountain National Park in Colorado in the early morning hours of Aug. 13, competing with lights from vehicles on nearby roads. The annual Perseid meteor shower peaks in the early August. The green sky is airglow, a phenomenon of the upper atmosphere seen at night.

13. Ebola in the Congo: A health worker is seen inside an ambulance in an Ebola treatment center run by The Alliance for International Medical Action (ALIMA), before heading to pick up a suspected Ebola case on Aug. 12 in Beni.

14.A Message in Switzerland: This aerial picture shows a giant roll of more than 2,500 laminated postcards displayed for an exhibit test of an action against climate change, in the Aletsch Glacier near the Jungfraujoch in the Swiss Alps on Aug. 13. The test was organized to prepare a world record attempt of the largest postcard on the Alps' longest glacier, to kick off a global youth climate movement. Swiss Agency for Development and Cooperation along with the WAVE foundation expect to create the largest postcard made up of at least 100,000 standard sized postcards.

Topicsclimate changeCurrent eventsweek in picturesConservationrefugeesWeek in PhotosPhotos
A woman and her child look at the digital fishes at an audio-visual art installation titled "Ocean Dive" during the Aquarium by Naked exhibition held at the Guardian Art Center in Beijing, Aug. 12, 2018.
Andy Wong/AP