These powerful images capture everything from religious traditions to natural disasters.

Why Global Citizens Should Care
From devastating natural disasters to the global refugee crisis, these photos show why it’s more important than ever to commit to achieving the Global Goals. You can join us in taking action here.

This week has been one of both celebrations and struggles that unify human experiences around the world.

From New Delhi to Cairo to Mecca to the Rakhine state, people celebrated Eid al-Adha on Aug. 22. Muslims across the globe offered prayers and animal sacrifices to mark the holiday, which emphasizes community and charity toward the poor.

Despite these celebrations, several parts of the world were struck by tragedy this week as monsoon flooding — the worst in 100 years — in Kerala, India, continues to threaten lives. Extreme weather associated with climate change has brought 42% more rainfall to the region this season. People living in poverty in areas where infrastructure and disaster mitigation efforts are lacking, have been the most affected by the monsoons and such climate events.

In Indonesia, 555 people have died and as many as 390,000 have been displaced after of a series of earthquakes struck the island of Lombok. The region has devastating history of earthquakes, namely a 9.1 magnitude one in 2004 that triggered a tsunami, killing 168,000 people in Indonesia.

In New York City on Monday, rapper Logic took a stand against the proposed US-Mexico border wall on stage, alongside immigrants and activists.

These incredible photos reflect the joy and pain of this week’s events. 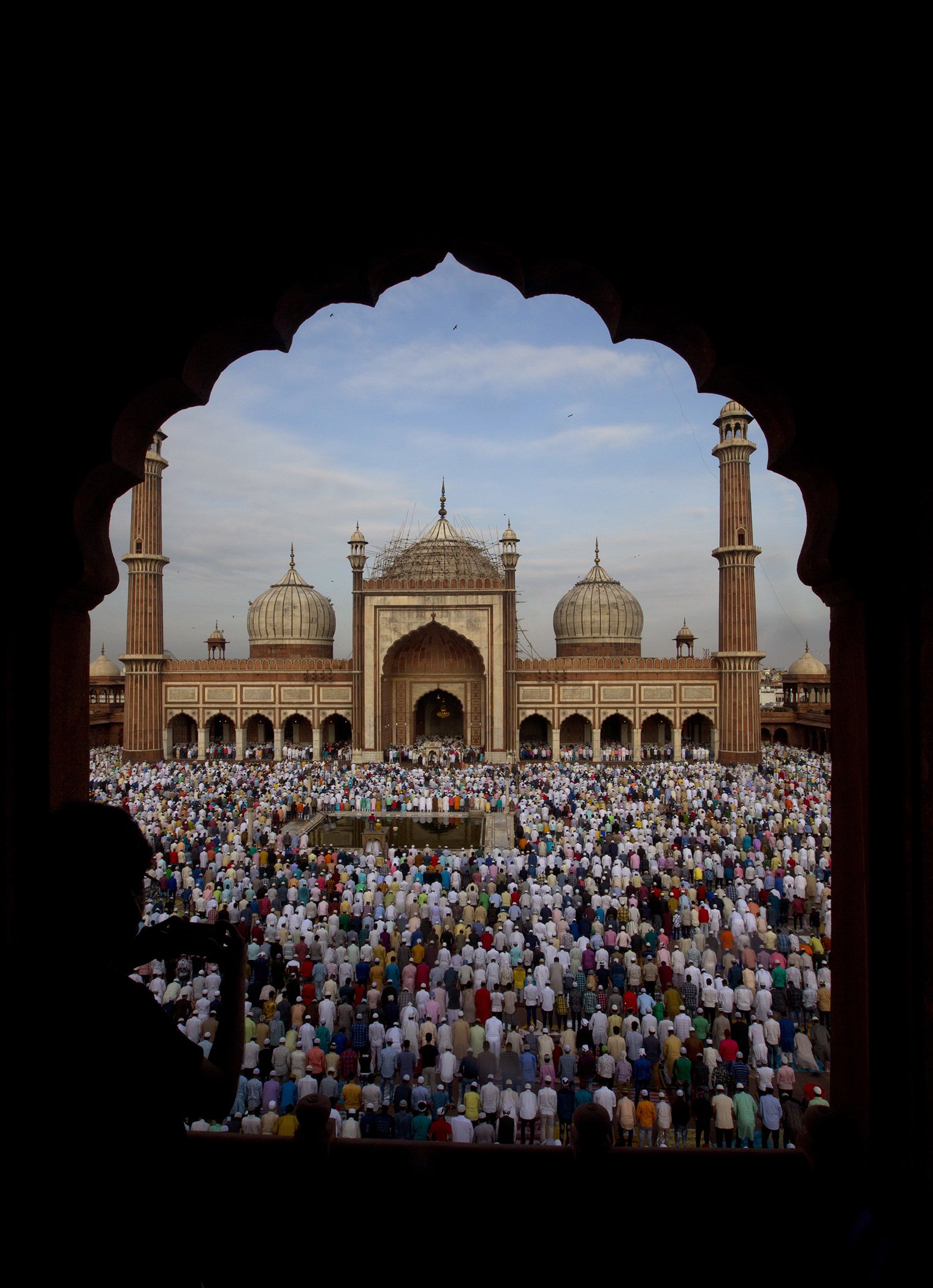 1. Eid al-Adha: Muslims offer Eid al-Adha prayers at Jama Masjid in New Delhi, India, on Aug. 22. Muslims around the world celebrate Eid al-Adha, or the Feast of the Sacrifice, which coincides with the Hajj pilgrimage from Medina to Mecca. During the holiday, Muslims often sacrifice an animal to commemorate when God appeared to the prophet Ibrahim in a dream asking him to sacrifice his son. As Ibrahim was about go through with the sacrifice, God stopped him and gave him a sheep to kill instead. Today, in honor of the holiday, many Muslim families sacrifice an animal and share the meat with the poor, and are also required to donate to charities that benefit the poor. 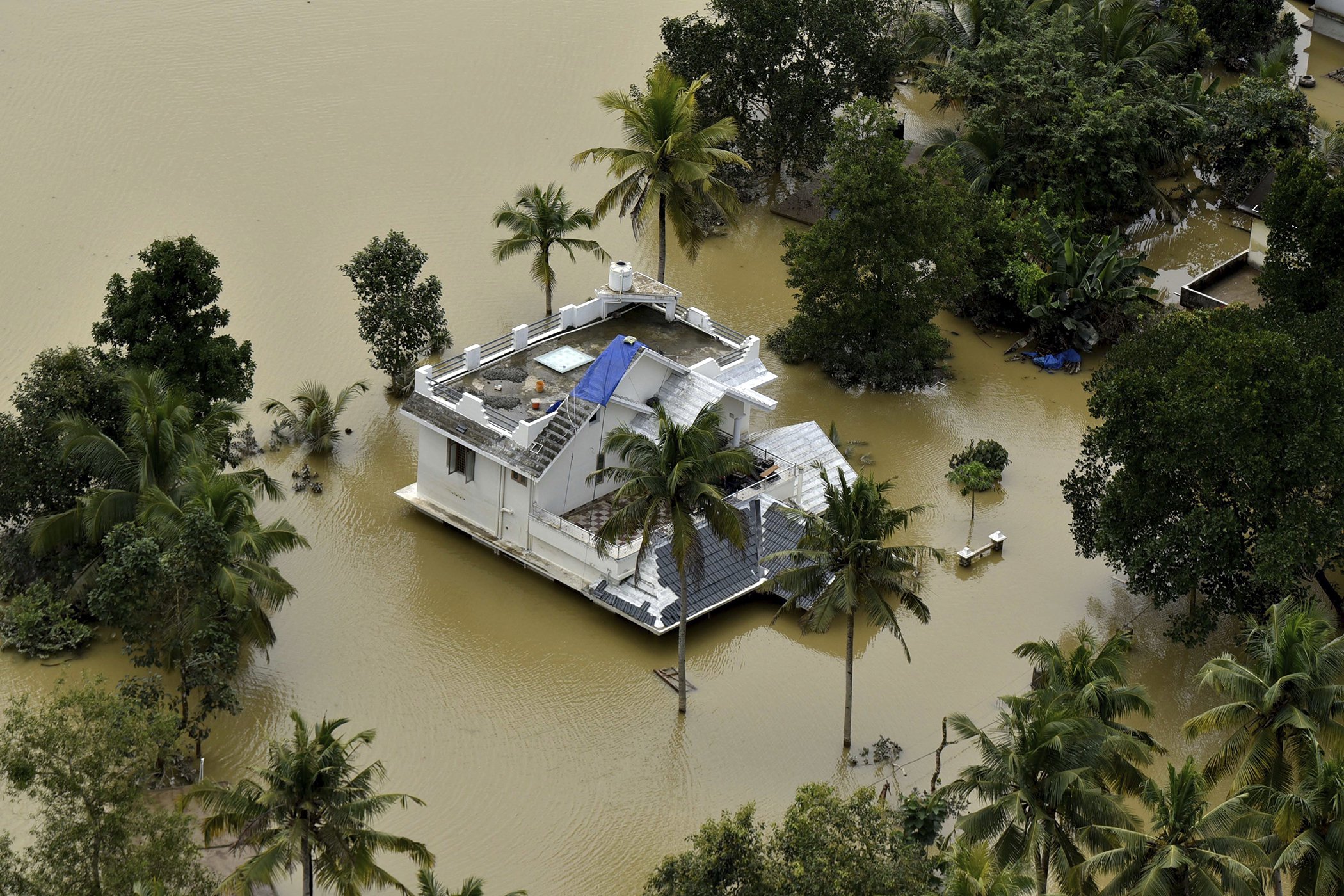 2. Monsoon Flooding in Kerala: A house is partially submerged in flood waters in Chengannur in the southern state of Kerala, India, on Aug. 19. Over 800,000 have been displaced in the southern Indian state of Kerala, where flooding, landslides, and bridge collapses have killed hundreds of people in the past week. And for rescue crews, saving lives often means swimming through filthy, dangerous sewage in order to reach isolated residents.

3. Immigration from Venezuela: Venezuelan migrants on their way to Peru sleep along the Pan-American Highway between Tulcan and Ibarra in Ecuador, after entering the country from Colombia, on Aug. 22. Ecuador announced on Aug. 16 that Venezuelans entering the country would need to show passports from Aug. 18 onward, a document many are not carrying. And Peru followed suit on Aug. 17, announcing an identical measure due to begin on Aug. 25. According to the UN, more than 2 million Venezuelans have fled the worsening economic crisis in the oil-rich nation since 2014.

4. Rohingya Refugee Crisis: A Rohingya Muslim child holding an umbrella while under the rain at Shwe Zar village is seen during a government-organized visit for journalists in Maungdaw township, Rakhine state, on Aug. 23 as Rohingya celebrate Eid al-Adha. More than 129,000 Rohingya Muslims remain in squalid camps in Myanmar's Rakhine state living under apartheid-like conditions, cut off from adequate health care and unable to travel, while more than 700,000 fled to Bangladesh during a violent army crackdown in August 2017 that the US and UN have called "ethnic cleansing." 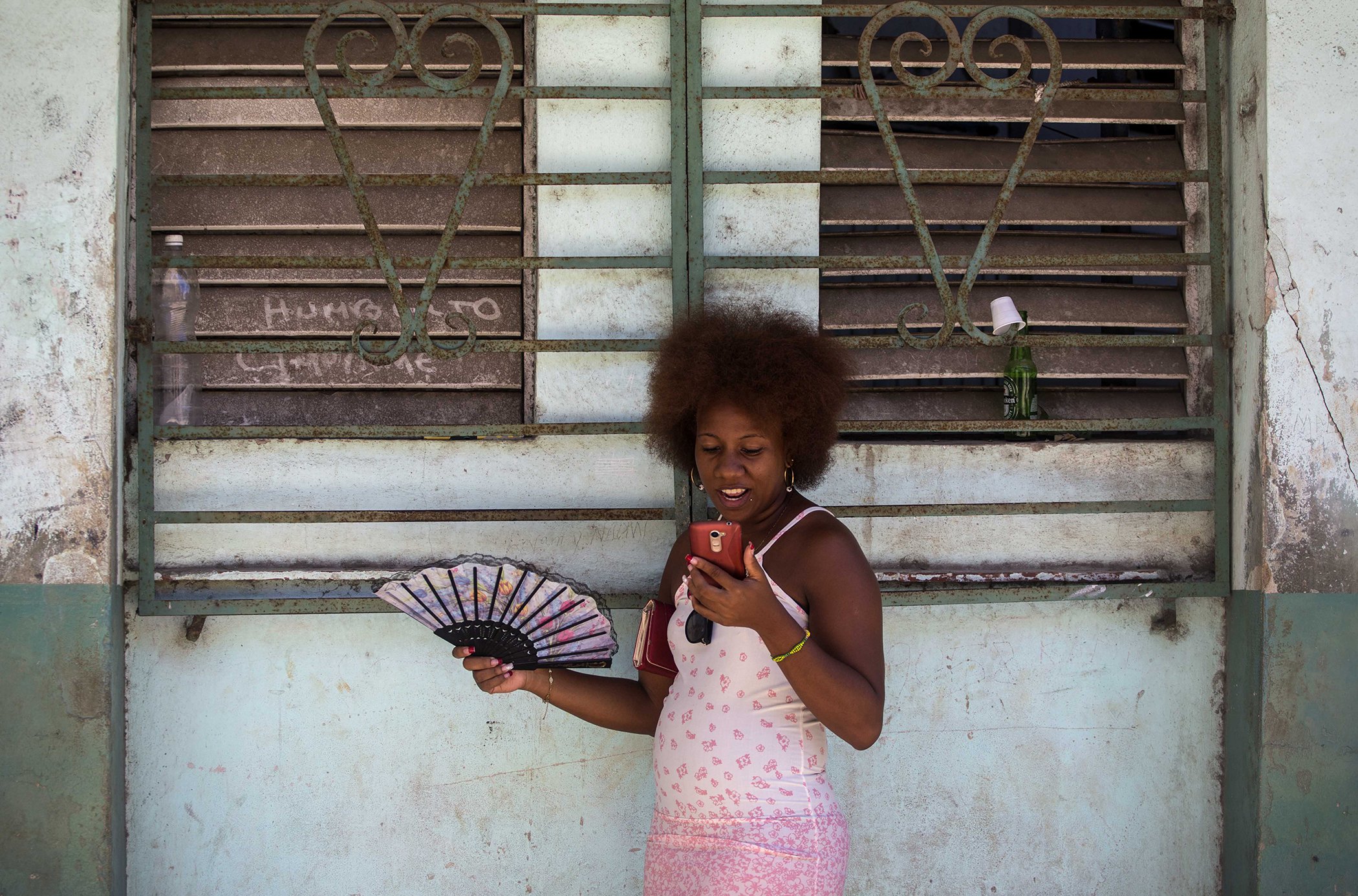 5. Internet in Cuba: A woman uses her smartphone to surf the internet in Havana, Cuba, on Aug. 22. The state telecommunications company launched on Wednesday the latest, and most extensive, of a recent series of test runs of a mobile network that would give citizens greater access to the internet than has existed before on the island. According to Reuters, analysts believe that web access could ultimately weaken government control over what information reaches people in a country where the state has a monopoly on the media. 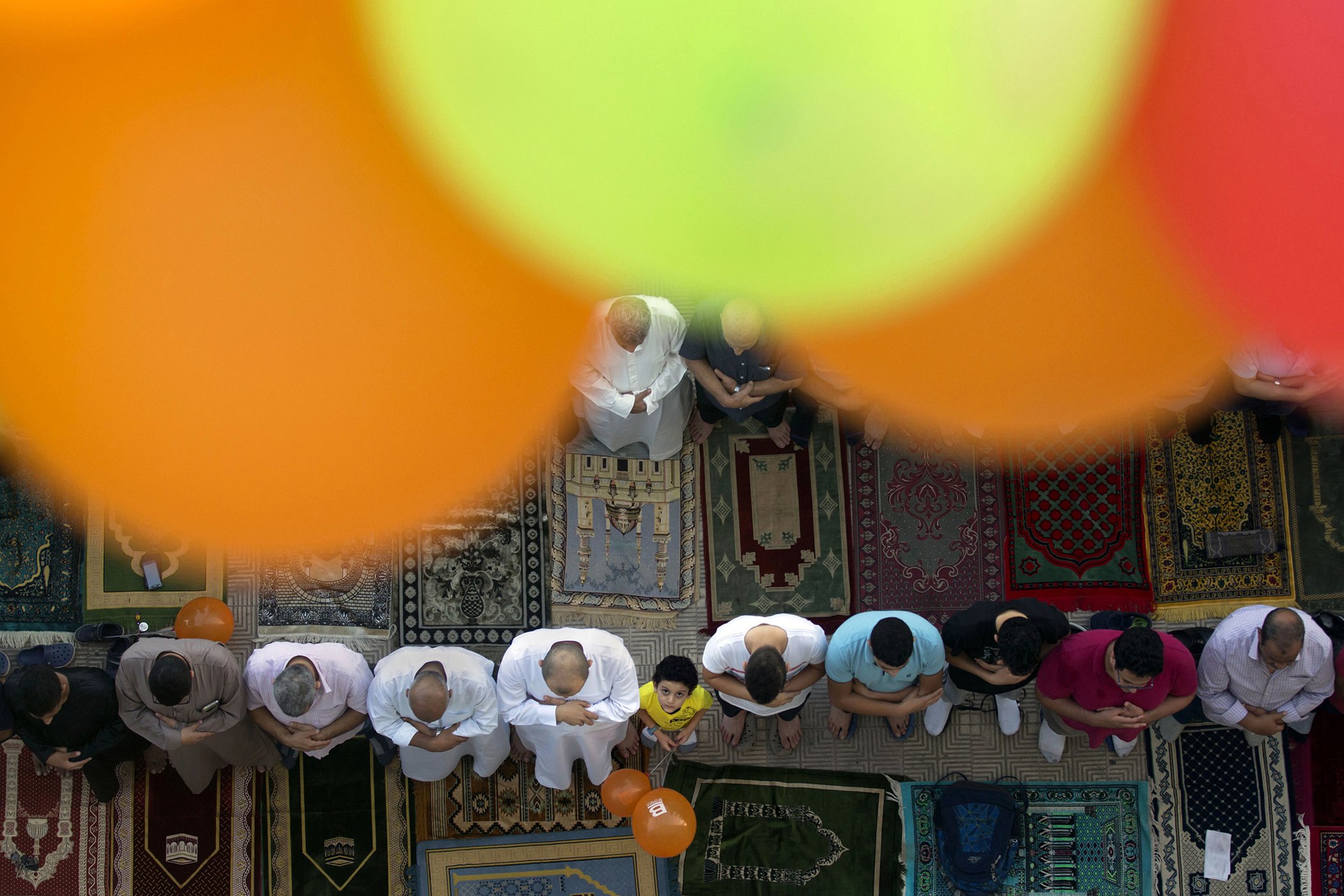 6. Eid al-Adha in Egypt: Muslims offer Eid al-Adha prayers outside al-Seddik mosque in Cairo, Egypt, on Aug. 21. During the holiday, which in most places lasts four days, Muslims slaughter sheep or cattle, distribute part of the meat to the poor, and eat the rest.

7. Indonesia Earthquake: A woman and children stand in front of a tent at a temporary shelter in the village of Menangga Baris on Indonesia's Lombok Island on Aug. 22, after a series of recent earthquakes. On Aug. 21, Indonesian aid agencies and officials to help survivors after the third quake disaster in less than a month hit Lombok Island, where an estimated 500 people have died and hundreds of thousands are homeless.

8. Logic's Immigration Message: Logic performs "One Day" onstage at the MTV Video Music Awards at Radio City Music Hall on Monday, Aug. 20, in New York. While wearing a shirt saying "F*CK THE WALL," Logic was also was joined on stage by dozens of immigrants and activists.

9. Migrant Crisis: A man holds a fellow migrant who got injured while forcing their way into the Spanish territory of Ceuta on Aug. 22. Over 100 migrants made their way into Ceuta after storming a barbed-wire border fence with Morocco and attacking police with caustic quicklime, a local official said.

10. US Carbon Emissions: The Longview Power Plant, a coal-fired plant, stands on Aug. 21 in Maidsville, West Virginia. The plant's single unit generates 700 net megawatts of electricity from run-of-mine coal and natural gas. In a stop in West Virginia, President Donald Trump is expected to announce a proposal to allow states to set their own emissions standards for coal-fueled power plants. Environmental activists say this would be a massive blow to reducing carbon emissions. 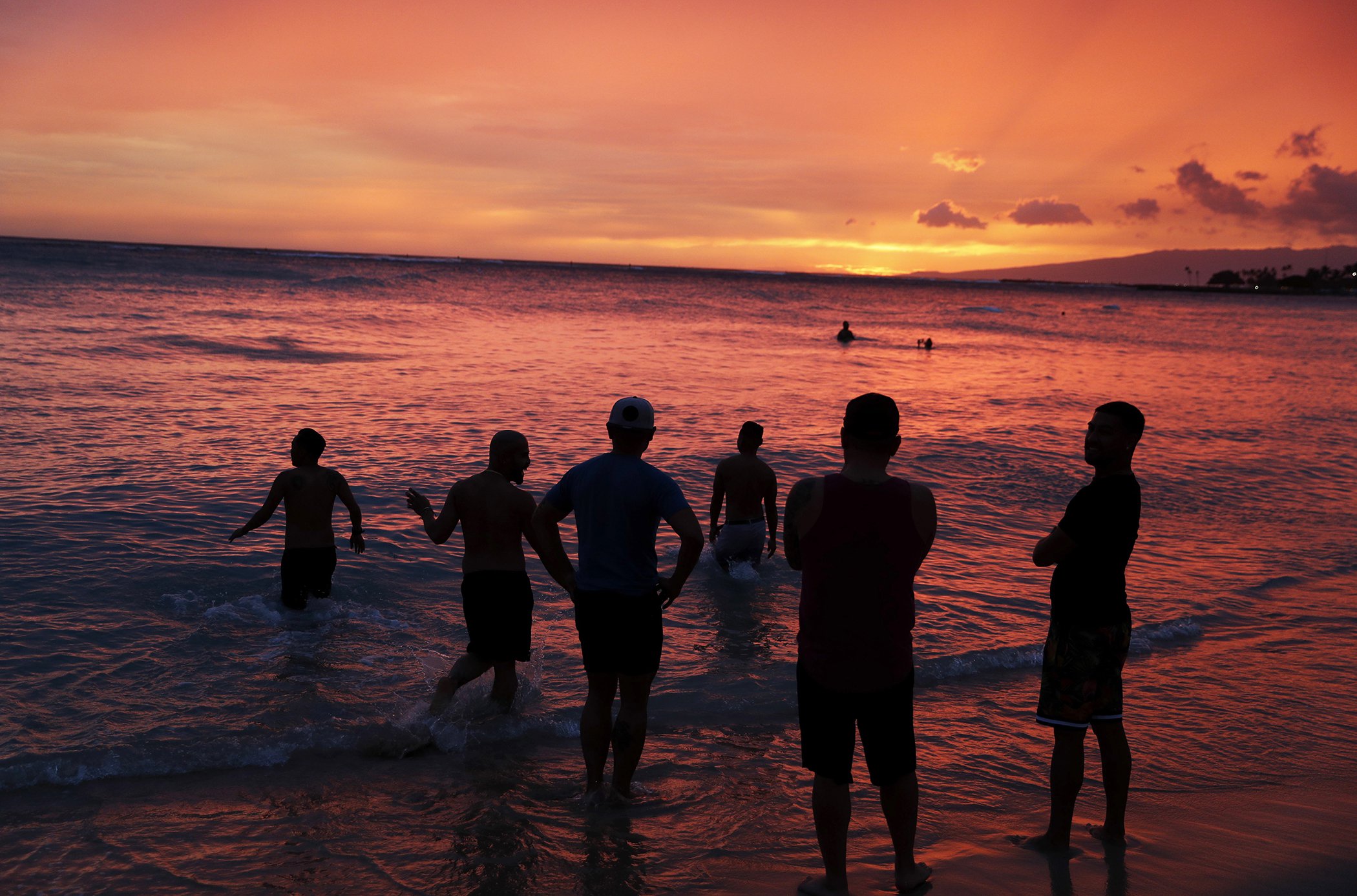 11. Hurricane Lane: People watch the sunset on Waikiki Beach ahead of Hurricane Lane on Aug. 23, in Honolulu, Hawaii. Residents of Hawaii are preparing for a rare threat this weekend as Hurricane Lane, a category 3 storm, makes its way toward the islands. According to Vox, hurricanes and tropical storms are an uncommon occurrence in this part of the central Pacific, due to the high-pressure weather patterns and the cool, deep water surrounding the Hawaiian islands. Though the exact track of Lane its still uncertain and the storm is expected to weaken lightly, the storm is still expected to bring heavy rain, flooding, and wind. While hurricanes are a natural occurrence and are not solely caused by climate change, scientists and experts predict that the changing climates will create bigger and more powerful storms in the future.

Topicsclimate changeweek in picturesrefugees
People watch the sunset on Waikiki Beach ahead of Hurricane Lane, Aug. 23, 2018, in Honolulu.
John Locher/AP