A US Air Force plane drops fire retardant on a burning hillside in the Ranch Fire in Clearlake Oaks, Calif on Aug. 5, 2018.
Josh Edelson/AP
NewsCitizenship

12 Stunning Photos of Protest and Climate Change This Week

These images are striking.

Why Global Citizens Should Care
From historic wildfires to refugees to protests in support of women’s health, these photos show why it's more important now than ever to commit to being the generation to achieve the United Nations’ Global Goals. You can join us in taking action on this issue here.

Across the globe, people are experiencing displacement as a result of climate change and political polices.

California wildfires continue to tear through the state, threatening structures and human lives. The Carr fire near the mountain town of Shasta has been named the state’s sixth-most destructive wildfire in recorded history. This comes just months after the Thomas Fire, the second-largest fire in the California’s modern, burned 281,893 acres of land. The Mendocino Complex fire—made up of two fires, the River Fire and the Ranch Fire — has just surpassed that record, burning 300,000 acres. Underscoring this frightening trend, 12 of the 15 largest fires in the state's history have occurred since 2000.

Meanwhile, as a result of the US' “zero tolerance” policies at the US-Mexico border, more than 2,300 children were separated from their family members in recent months. After reversing this policy, the US has missed multiple deadlines for family reunifications. Time magazine reports that as of Aug. 9, 559 children have yet to be reunited with their parents.

In Rio de Janeiro, Brazil, people stood in solidarity with protesters in Argentina as the country held a historic vote on abortion. These actions are part of a larger movement across South America. "Ni una menos," or "Not one less" — a feminist movement to stop gender violence — has spread across the region.

Read More: These Are the Women 'Who Changed the World' — But How Many Have You Heard Of?

Here are some of this week’s most striking photos of the week. 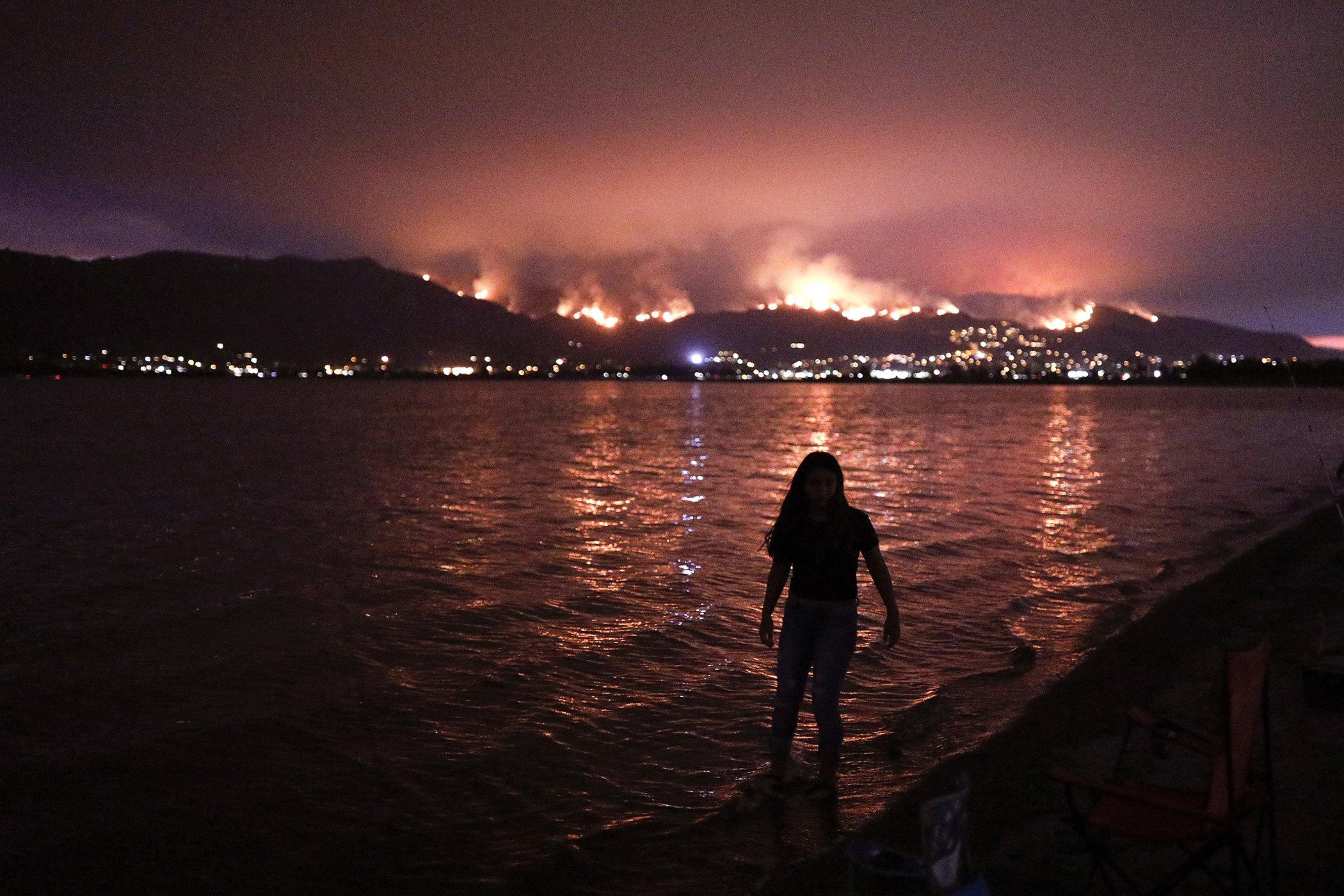 1. California Wildfires: A girl wades through water while watching a wildfire burn in the Cleveland National Forest in Lake Elsinore, California, on Aug. 8. Evacuations have been ordered for several small mountain communities near where a forest fire continues to grow in Southern California. 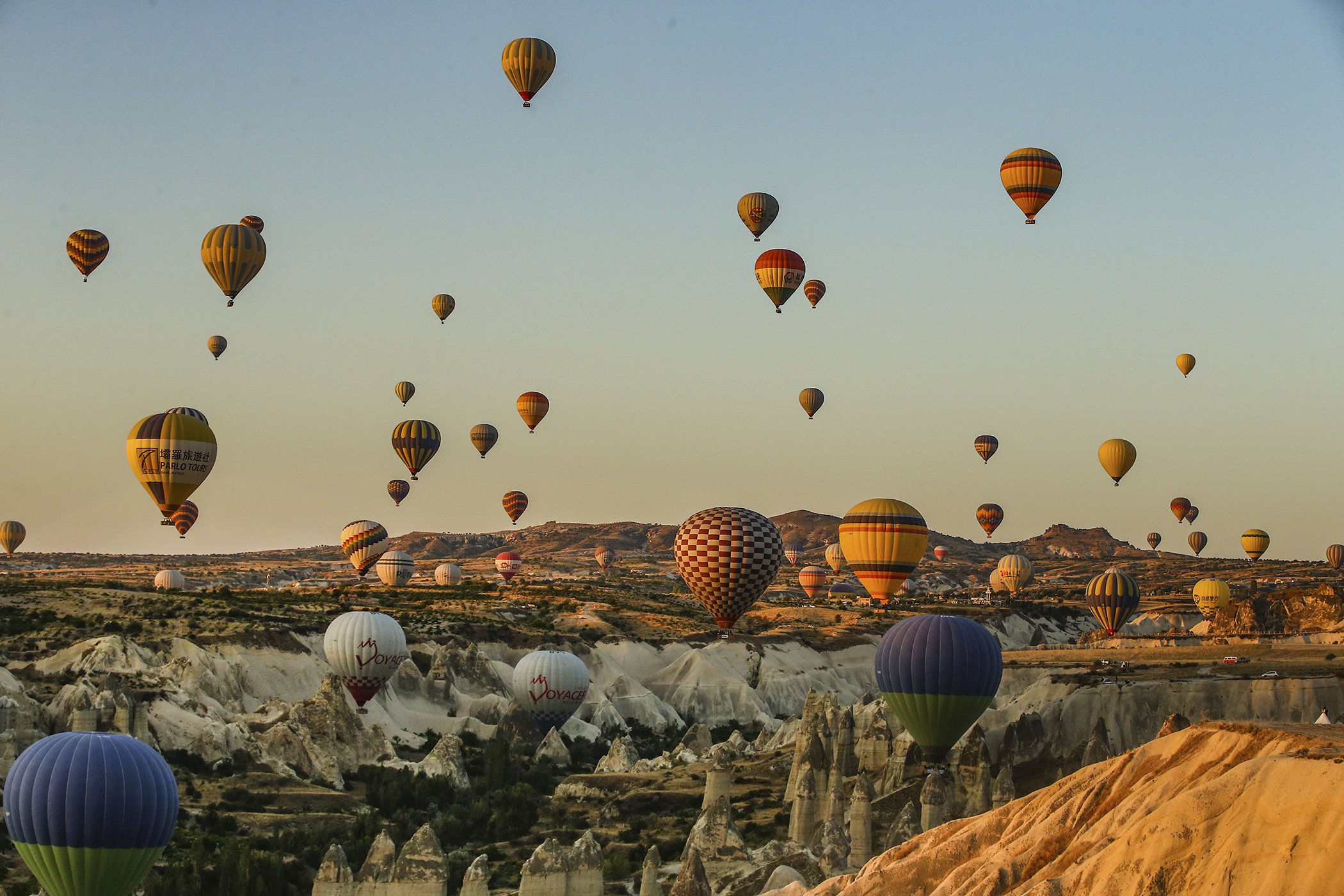 2. Turkey Daily Life: Hot air balloons, carrying tourists, rise into the sky at sunrise in Cappadocia, central Turkey, early on Aug. 7. Cappadocia has become a favourite site for tourists in hot-air balloons who can slowly drift above the "fairy chimneys" of stone orchards, vineyards and through impressive valleys, each with distinctive rock formations, colors, and features — and then float up over rippled ravines for breathtaking views over the region.

3. Rohingya Refugees: A Rohingya refugee boy carries a load on his shoulders as he walks through Kutupalong camp in Ukhia on Aug. 8.

4. Historic Wildfires in the US: Resident Arnold Lasker looks over the burned-out remains of his girlfriend's house in Spring Valley, near Clearlake Oaks, northern California, on Aug. 7. Tens of thousands of firefighters battled relentless flames ripping across California on Aug. 7, as the death toll from a series of infernos that erupted last month hit 11. The raging Mendocino Complex fire comprising twin blazes in the western state's north has now ravaged more than 290,000 acres, approximately the size of sprawling Los Angeles, in less than two weeks, becoming California's largest wildfire since record-keeping began a century ago. 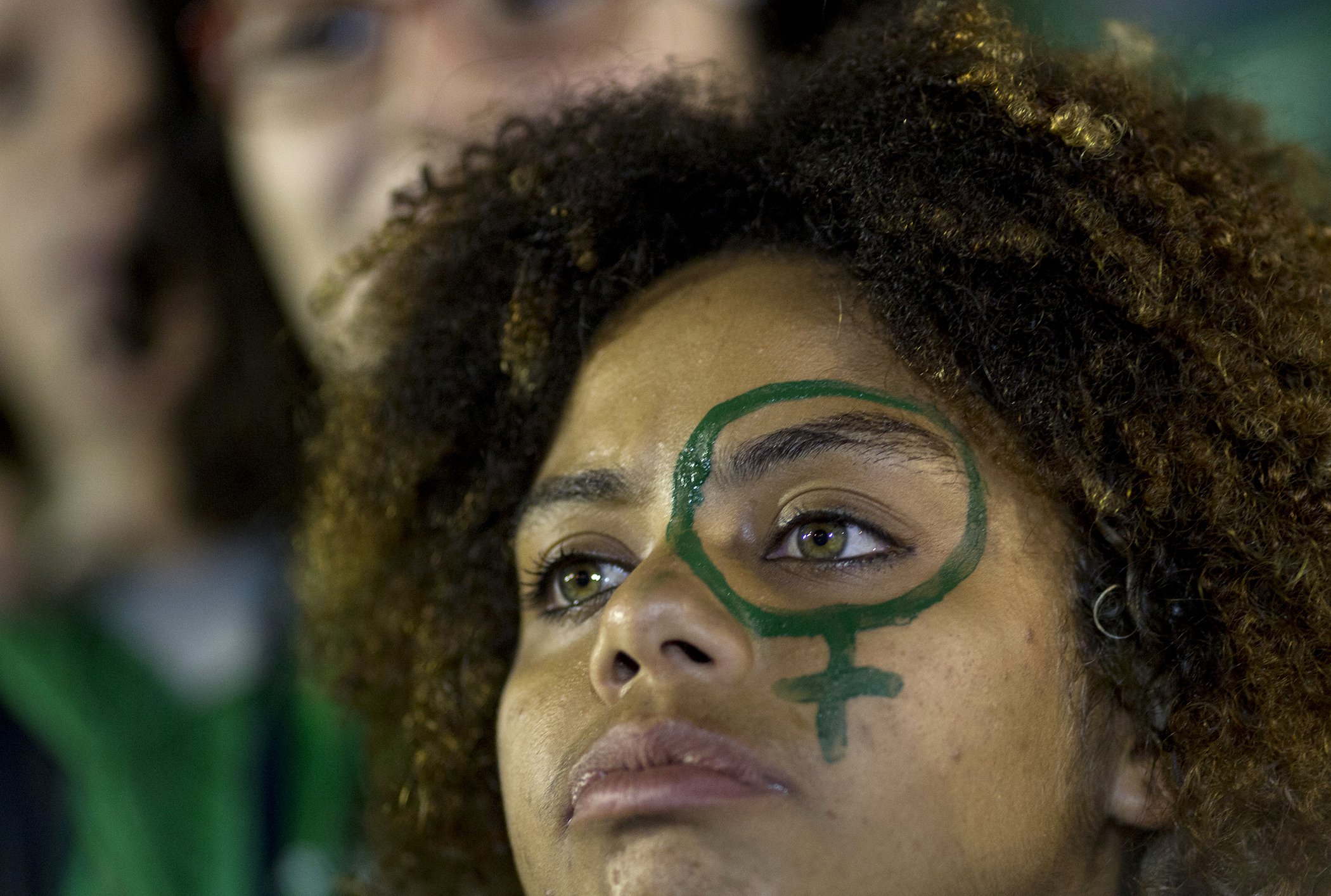 5. Women's Health Protest: A demonstrator rallies to show support for women's reproductive rights in Argentina, where lawmakers were debating the issue, outside the state of Rio de Janeiro's legislative assembly, in Rio de Janeiro, Brazil, on Aug. 8. 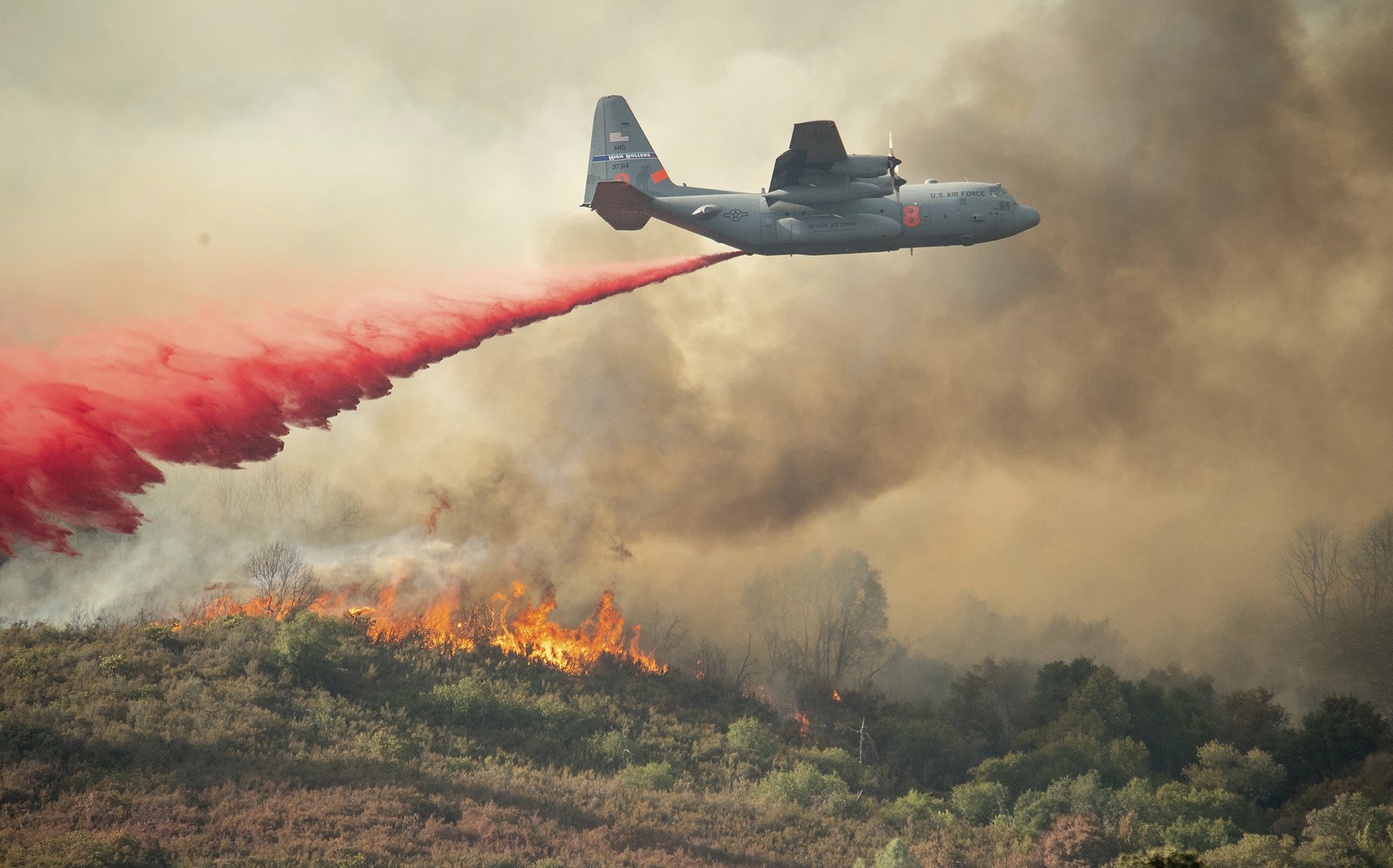 6. California Wildfires: A US Air Force plane drops fire retardant on a burning hillside in the Ranch Fire in Clearlake Oaks, California, on Aug. 5. Authorities say a rapidly expanding Northern California wildfire burning over an area the size of Los Angeles has become the state's largest blaze in recorded history. It's the second year in a row that California has recorded the state's largest wildfire.

7. Record-Breaking Ocean Temperature: Surfers gather near dying kelp beneath Scripps Pier on Aug. 7 in San Diego, California. A researcher said the area has seen above-average amounts of dying patties of kelp recently, which is attributed to warmer ocean temperatures. The sea surface temperature at Scripps Pier was measured at an all-time high of 78.8 degrees on August 3, the warmest since record keeping began at the pier 102 years ago.

8. Fisherman in India: Kashmiri fisherman rows a boat after a rainfall in Srinagar on Aug. 8. 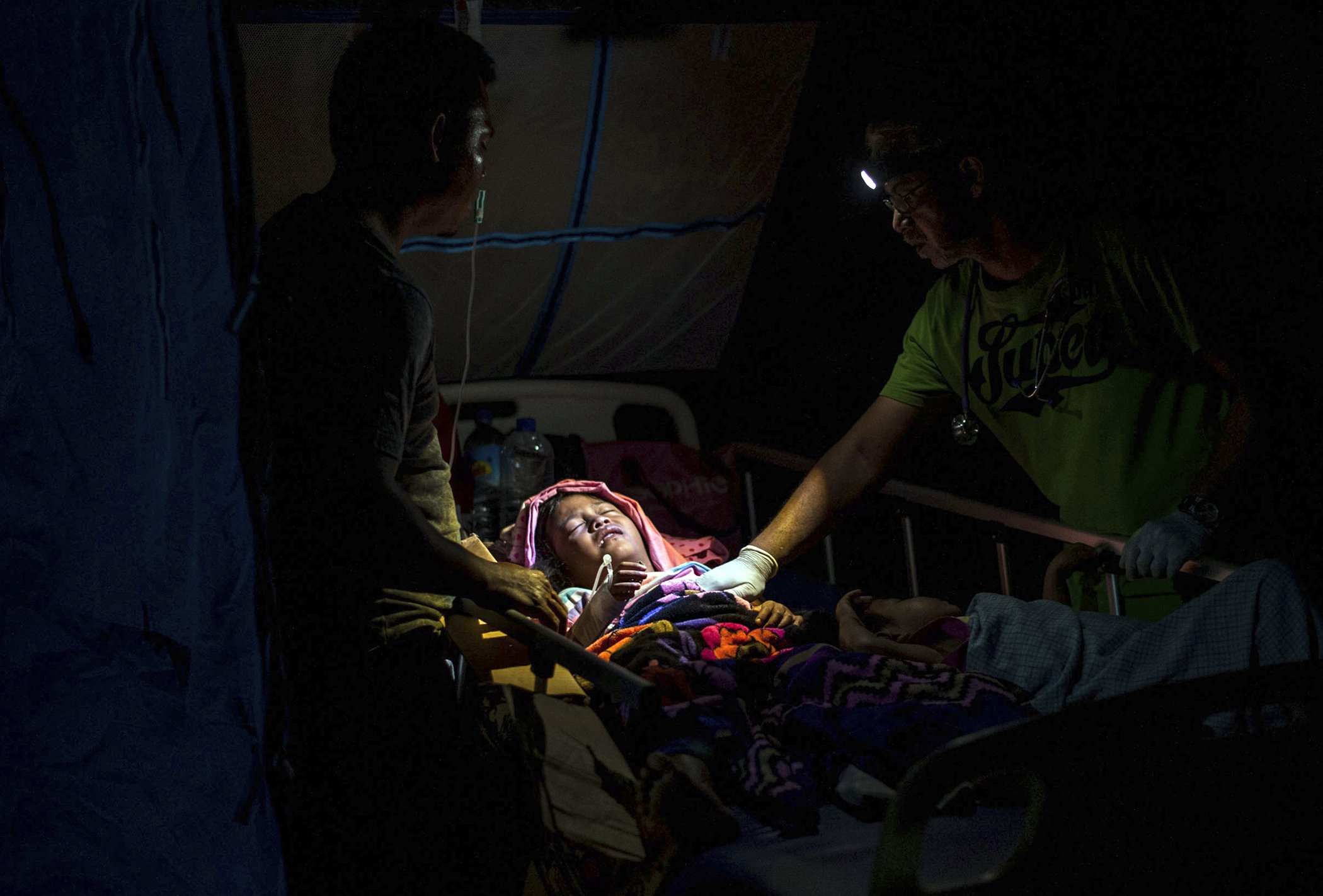 9. Indonesia Earthquake: A doctor examines children injured in the earthquake at a makeshift hospital in Tanjung on Lombok Island, Indonesia, on Aug. 6. The powerful earthquake flattened houses and toppled bridges on the Indonesian tourist island of Lombok, killing a large number of people and shaking neighboring Bali, as authorities said that rescuers still hadn't reached some devastated areas and the death toll would climb. 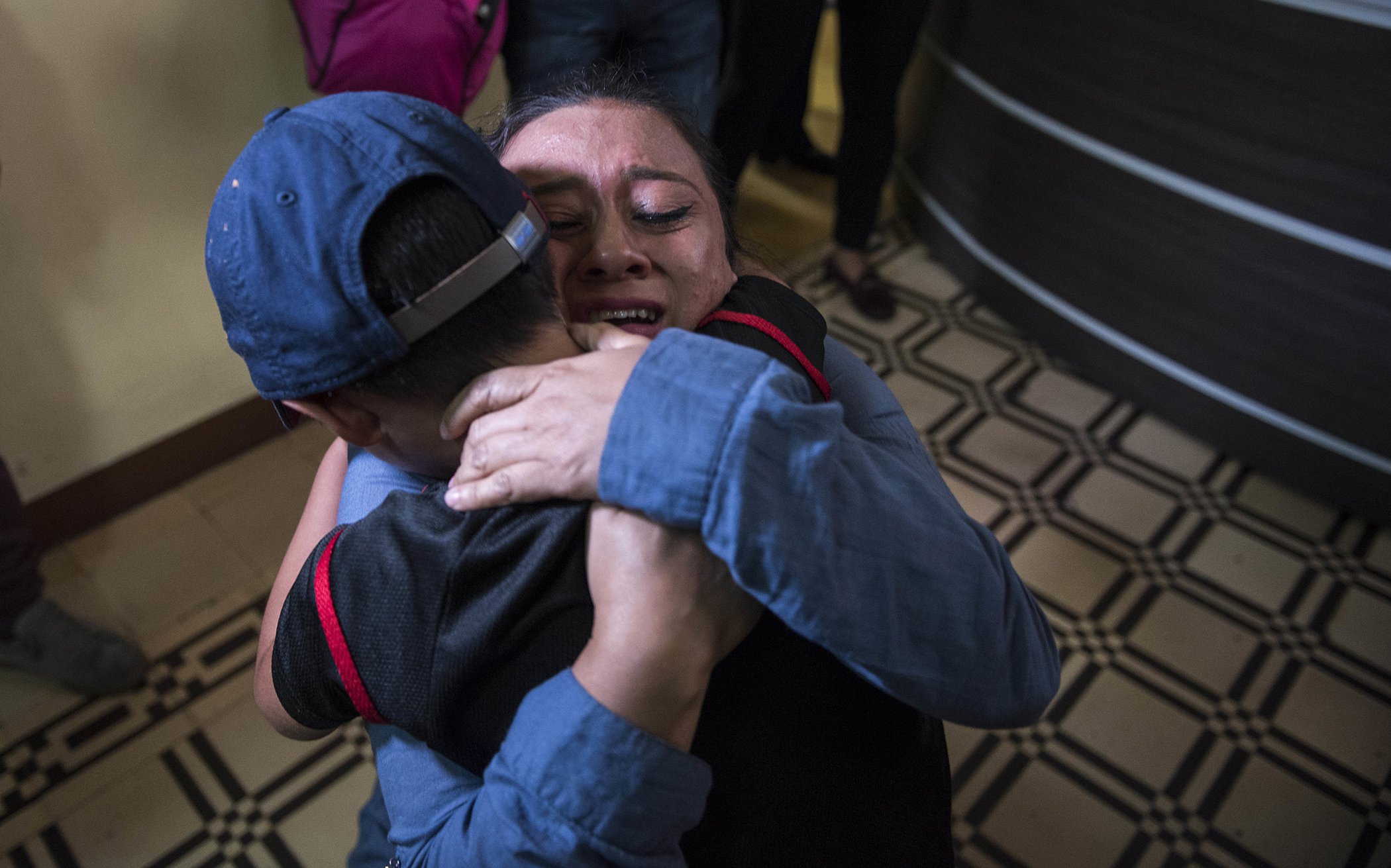 10. Family Separation in the US: Lourdes de Leon hugs her 6-year-old son Leo Jeancarlo de Leon as they are reunited at the shelter "Nuestras Raíces" in Guatemala City, on Aug. 7. De Leon said she and Leo had gone to the US in search of a better life because her low-paid job selling clothing wasn’t enough to provide him with a good future. They arrived in Arizona on May 10, and the boy was taken from her a couple of days later. She was returned to Guatemala on June 7, while he remained in a shelter in New York. 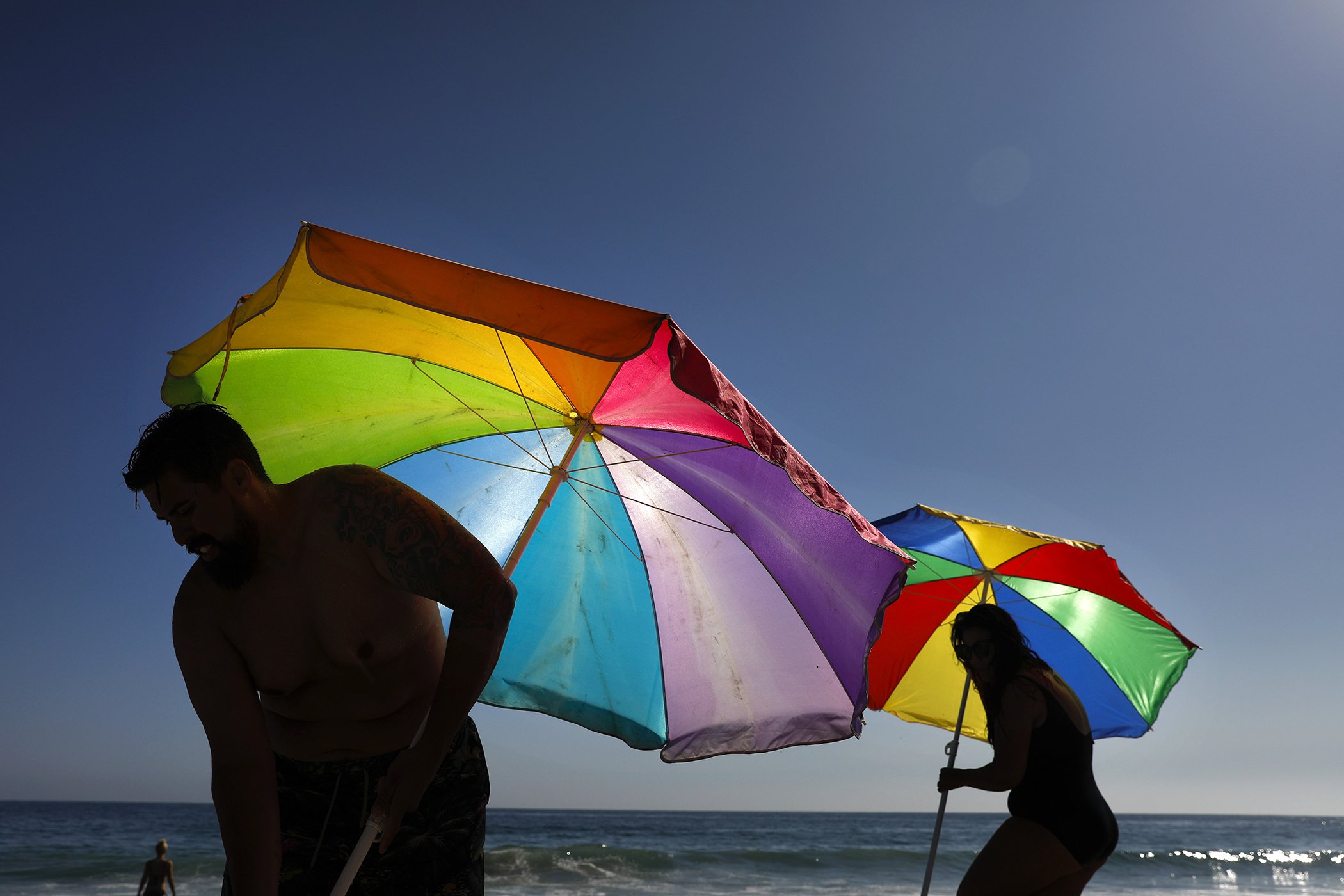 11. Heat Wave in the US: Mario Ramos, left, and wife, Tally, are silhouetted as they move their umbrellas on the beach on Aug. 7, in Laguna Beach, California. Weather forecasters are warning of excessive heat this week in parts of Nevada, Arizona, and California.

12) China Daily Life: This photo, taken on Aug. 5, shows people cooling off in a swimming pool in Yangzhou, in east China's Jiangsu province.

Topicsclimate changeCurrent eventsCitizenshipProtestsWeek in Photos
A US Air Force plane drops fire retardant on a burning hillside in the Ranch Fire in Clearlake Oaks, Calif on Aug. 5, 2018.
Josh Edelson/AP