"We want to make sure every child gets their vaccinations. It's their right!"

UK politicians and campaigners come together to end polio.

The success of polio eradication has been so effective that 99.9% of the disease has been wiped out. Over the last 30 years there has been a concerted global effort that has seen new cases of polio drop from 350,000 a year in 1988, to just 51 this year. It’s a monumental achievement that was only made possible by organisations like Rotary, the World Health Organisation (WHO), The Centre for Disease Control and Prevention (CDC) and UNICEF, backed by the financial and political support to launch the Global Polio Eradication Initiative.

Although there’s only been 51 cases so far this year, the fight isn’t over. Now more than ever, governments and politicians need to once again renew their political commitment so that we can end this horrific disease once and for all. That’s why earlier this week, The Global Poverty Project, in partnership with Global Citizen, Rotary and RESULTS UK, held a reception in the UK Parliament.

The event, hosted by Sir David Amess MP and held in the heart of Westminster Palace, brought together inspirational speeches and amazing stories from the people working to end polio. In the audience, they were joined by parliamentarians from across the political spectrum, all eager to learn about the fantastic progress made in polio eradication efforts but also the steps needed to finish the job. 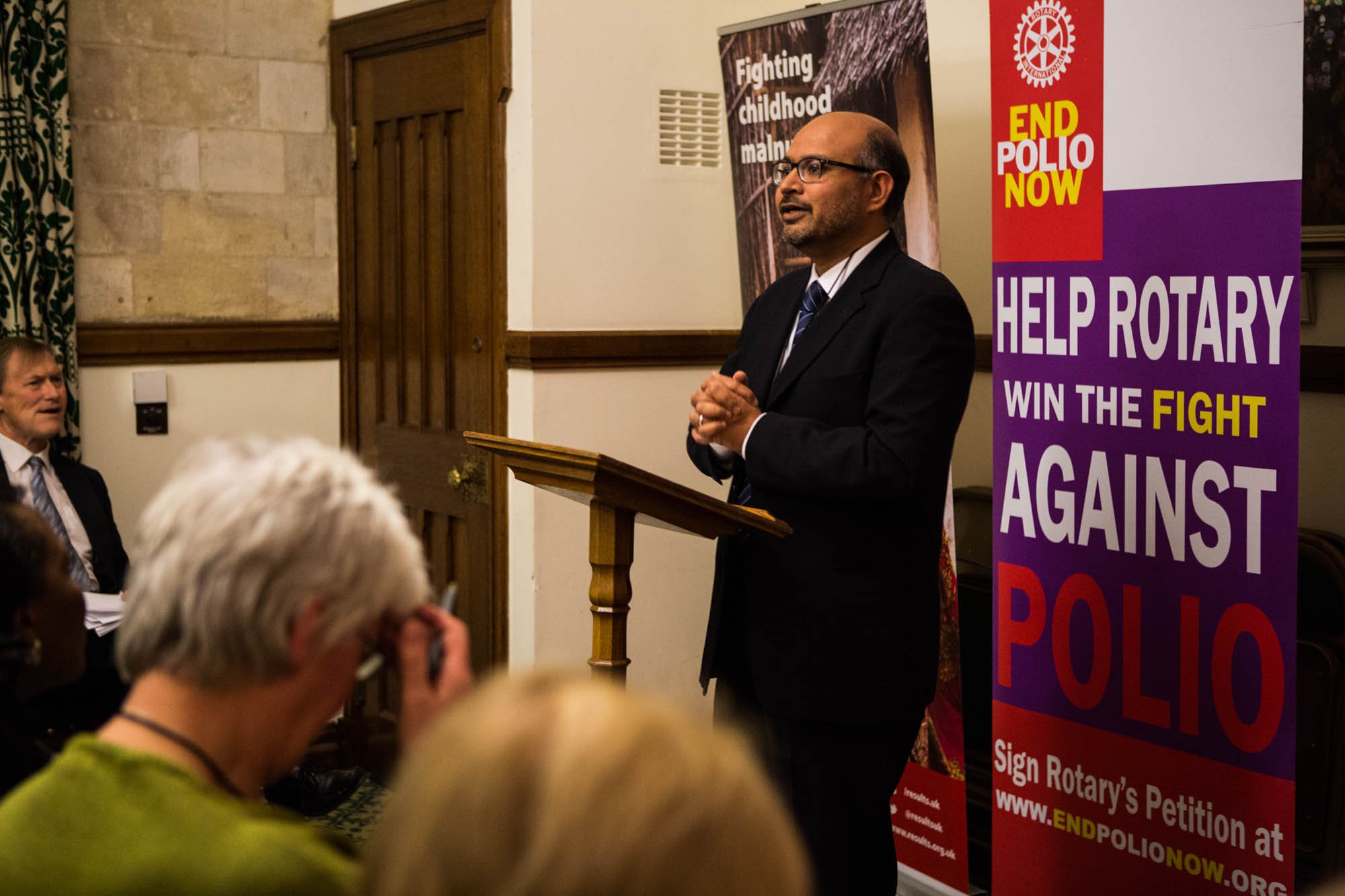 Anand Balachandran from the World Health Organisation spoke about the incredible progress made in countries such as India, while British Paralympian and polio survivor Anne Wafula Strike MBE inspired the audience with a speech on what it’s like to live with polio, finishing her address with “I’m am not a victim, I’m a survivor, and together we are going to stand up and be a success story.” 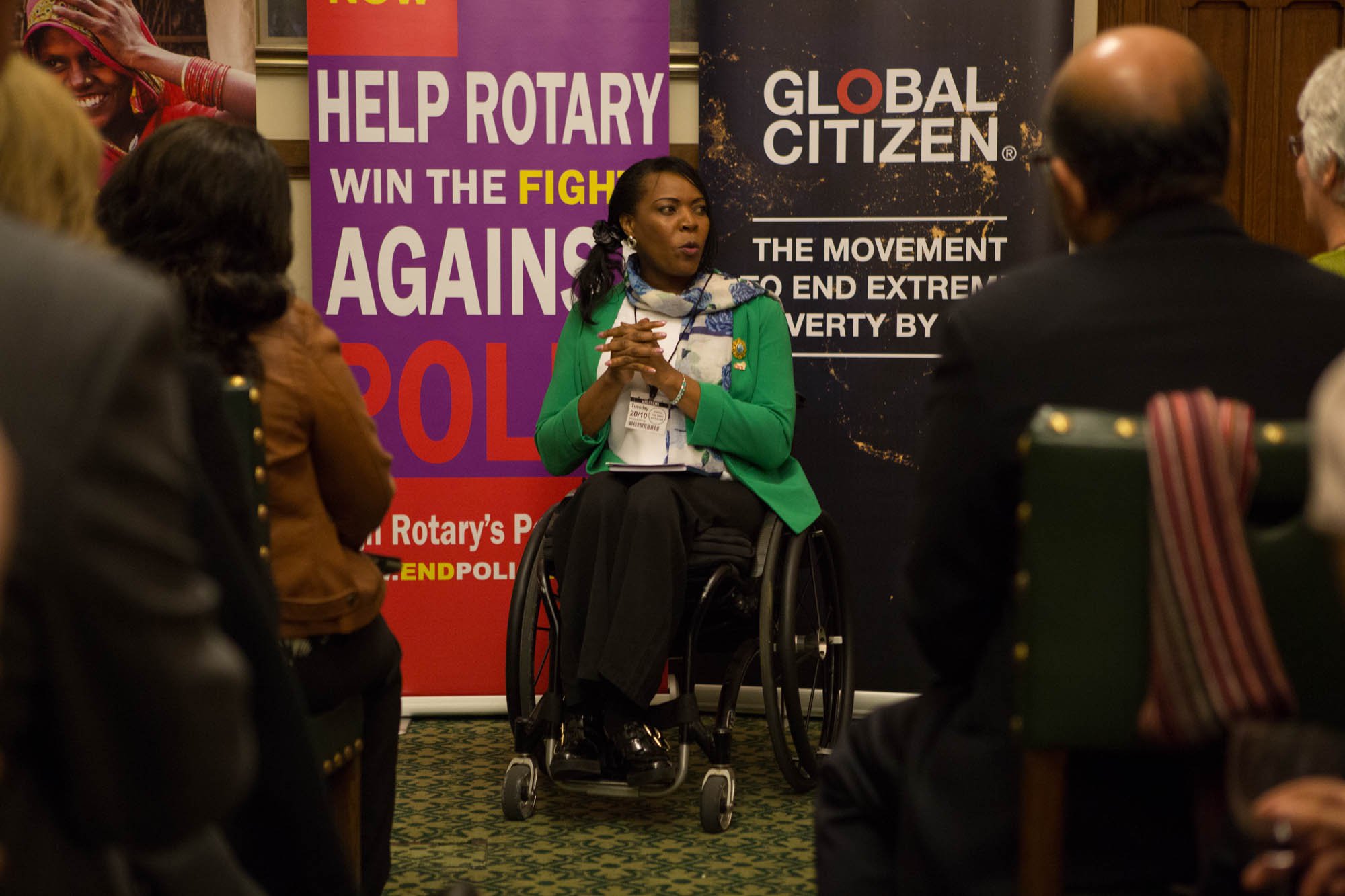 We also heard from Results UK grassroots campaigner Gill Price who made the rallying call that “this government stands a very real chance of being the government that eradicates polio," a sentiment that seemed to resonate well with some of the MPs who were in attendance.

Dropped into #endpolio reception to show my support for the campaign. We CAN eradicate polio by 2019 and get rid of polio for ever.

Before the Secretary of State gave the keynote address, the room heard a very powerful message from Faleke Bolanle, a health worker from Lagos, Nigeria. As someone who is on the ground, working everyday to help deliver vaccinations to children across Lagos, Faleke spoke about the hard work that goes into the efforts to reach all children in Nigeria. "We want to make sure every child gets their vaccinations. It's their right." 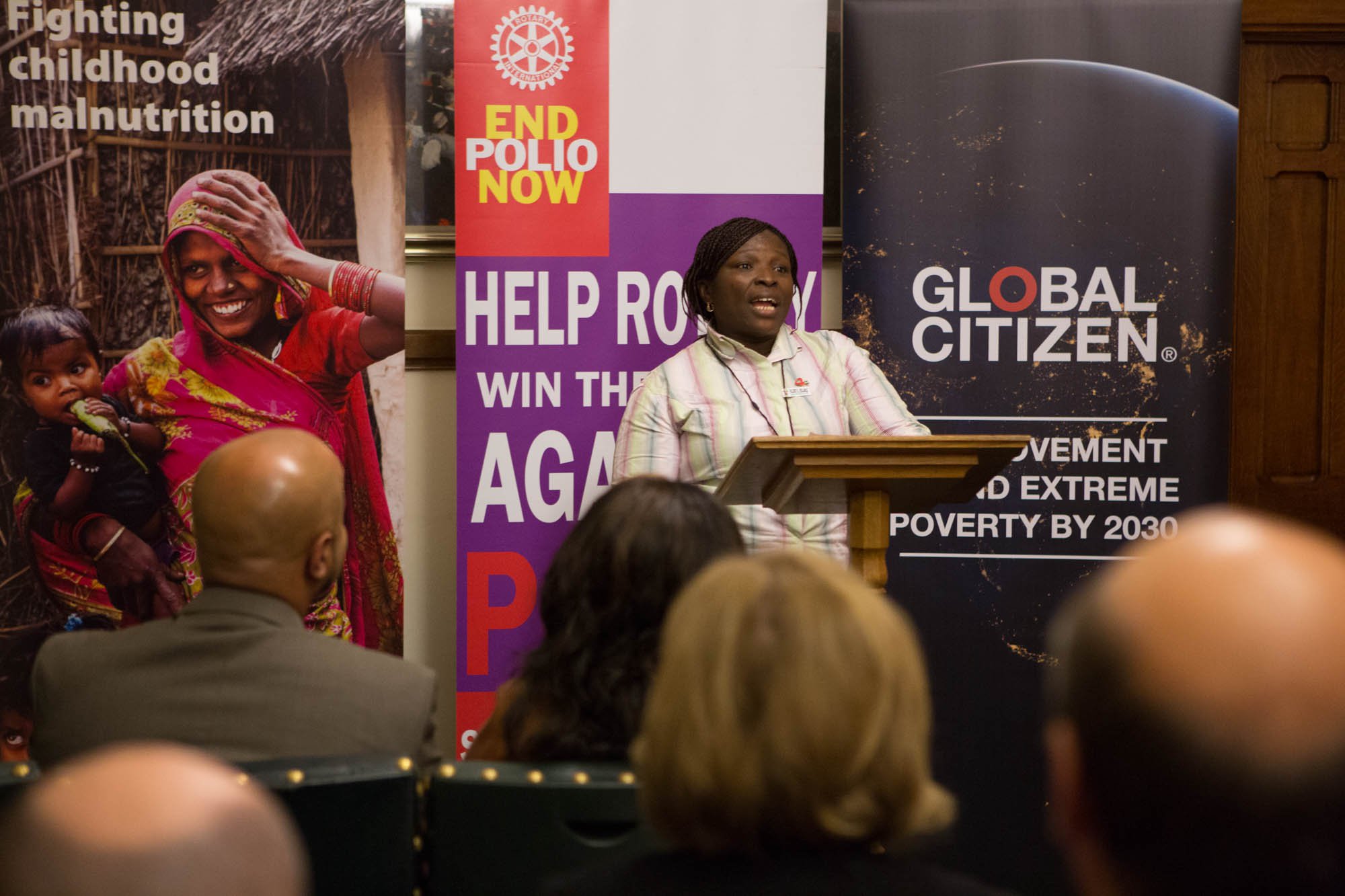 For the keynote address, the room welcomed Secretary of State for International Development, Justine Greening. Giving a thought-provoking insight, the Secretary of State paid tribute to the progress made and in particular the health workers who made and continue to make this happen, often the ‘unsung heros’ of polio eradication. It was only by chance that as the Secretary of State mentioned the achievement of Nigeria going a full year without a new polio case, her speech was interrupted with an outburst of ‘Happy Birthday’ from another reception in the next room. The irony was not lost. 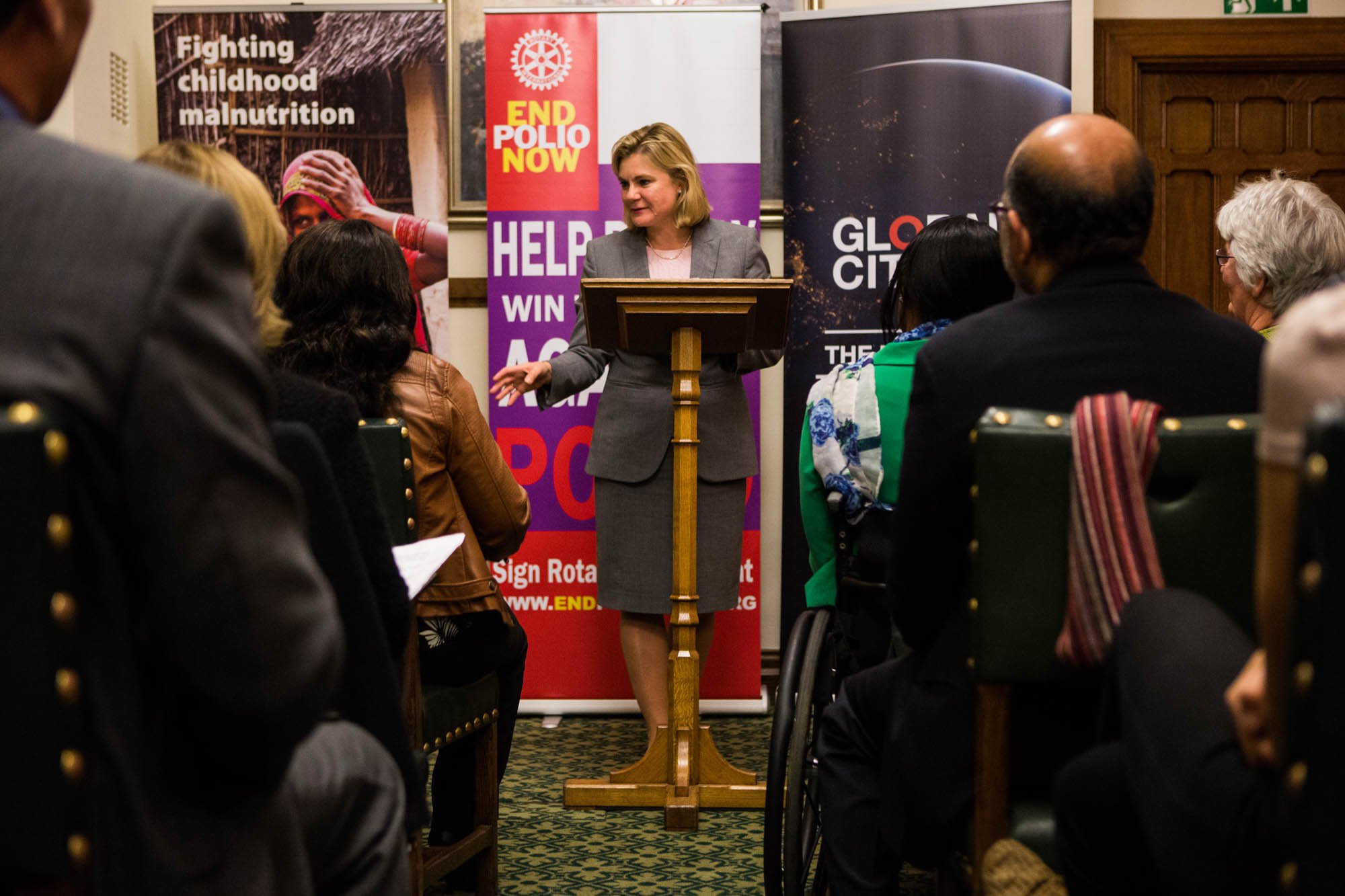 “We’re so close to seeing one of the greatest achievements in development. The UK Government wants to see the end of polio.”- Justine Greening addresses the audience.

After her speech, Global Poverty Project Director Stephen Brown handed over your petition to the Secretary of State, calling for the end of polio. The petition gained over 38,000 signatures in just a short space of time, and along with emails and tweets, Global Citizen had over 186,000 actions that called on world leaders to use the Commonwealth Heads of Government Meeting in Malta this year to renew political commitments to ending polio forever. 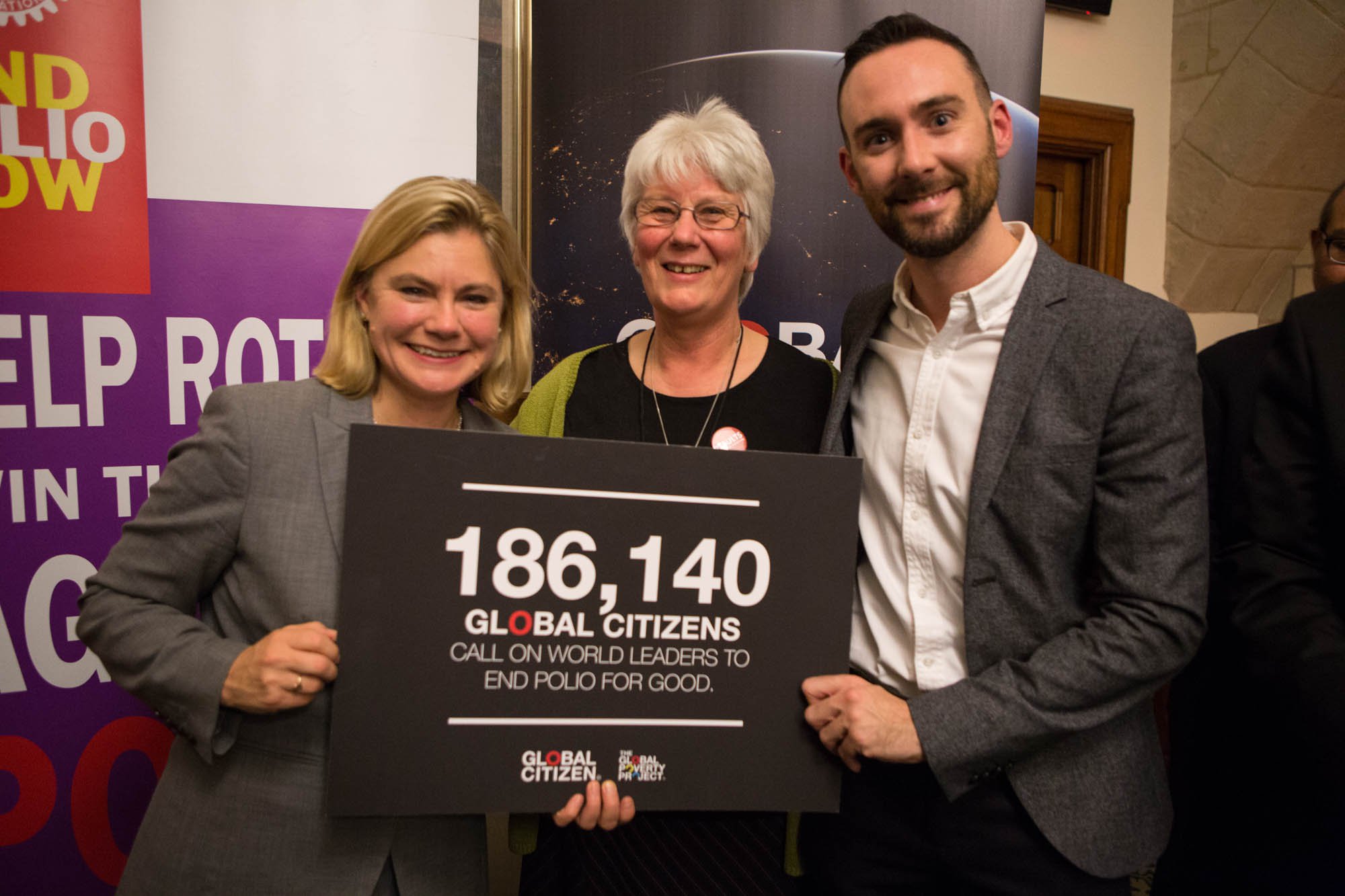 Building a movement to end extreme poverty is at the heart of everything we do here; it’s only when people come together that things can change. To see so many global citizens take action and hold leaders accountable on polio eradication is remarkable, but in order make the end of polio a reality, there needs to be the political will from countries around the world to make it happen. The UK is already a major partner in the fight to end polio, and with their continued support, the world can eradicate the second disease of all time.