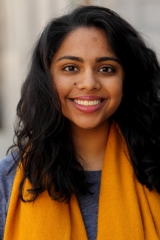 We seriously need to change the way we talk about Muslims

On the evening of February 10th in North Carolina, a targeted shooting claimed the lives of Deah Barakat, Yusor Mohammad, and Razan Mohammad Abu-Salha.

Deah was a dental student. His wife, Yusor, would have started dental school in the fall. His sister, Razan, was a college student. They were Muslims, and it took the trending of #MuslimLivesMatter on Twitter for the news of their tragic deaths to gain traction in the media.

The US National Executive Director of CAIR urged for an official statement on the shooter’s motive, “based on the brutal nature of this crime, the past anti-religion statements of the alleged perpetrator, the religious attire of two of the victims, and the rising anti-Muslim rhetoric in American society.”

I want to avoid speculating and extrapolating on a crime that’s still under investigation; however, the fact remains that three young lives were needlessly taken, very possibly because of their personal faith. That’s enough to be angry. That’s enough to use this tragedy to move forward on a conversation that needed to happen a long time ago.

We seriously need to change the way we talk about Muslims.

Last week, Sana Muttalib and M. Hasna Maznavi opened the first women-only mosque in the United States to create a religious environment where Muslim women can feel empowered and connected with their faith.

This news was covered by most mainstream outlets, unleashing the typical stream of impressively uninformed comments that I see every time Islam is in the limelight.

If we want a world where people of all religions can live with dignity and respect - where people can believe as they wish without their lives being at risk - we have to be smarter, and kinder, than we currently are.

It’s important that we don’t strip entire groups of people of their history and culture, over-simplifying a huge and complex religion,  just so we can make the discussion easier.

Islam evolves differently within national boundaries, in local mosques, and in people’s minds. So when we’re talking about “Muslims” and “Islam”, we have to be as specific as possible, because people’s experiences and equality within their societies hinges on a number of different factors.

As Reza Aslan said in this debate on CNN, “The actions of individuals and societies and countries like Iran, like Pakistan, like Saudi Arabia must be condemned, because they don't belong in the 21st century. But to say Muslim countries, as though Pakistan and Turkey are the same, as though Indonesia and Saudi Arabia are the same, as though somehow what is happening in the most extreme forms of these repressive countries, these autocratic countries, is representative of what's happening in every other Muslim country, is, frankly -- and I use this word seriously -- stupid. So let's stop doing that.”

When we treat an entire religion and all of its adherents like a problem, we push innocent people into defensive corners. This marginalizes the people who strive for change, or maybe, just want to live in peace. Like Muttalib and Maznavi.  Like Deah, Yusor, and Razan.

The idea that Muslim women’s only role in Islam is to be subservient to men is very common. While there are certainly examples of this - as well as an undeniable gender gap in various Muslim majority countries (which is a result of a web of factors) - the equality of women in Islam depends on the place and period in history. Muslim women have been political leaders of Pakistan, Bangladesh, Turkey, Indonesia, Jordan and many other countries over the last century, and there are examples of women’s leadership within Islam as well.

Khadijah – known as the wife and confidant of Prophet Muhammad - was a notable, powerful and charitable merchant in 7th century Arabia. She met him when she hired him to work in her business. She proposed to him. Her nobility, influence and companionship were critical to the rise of Islam, countering most modern stereotypes about Muslim women.

There are numerous women who were well-respected Islamic scholars and educators of their time. Scholar Mohammad Akram Nadwi published a 40-volume dictionary revealing a 1,400 year history of female religious leaders within Islam.  Thinking that he would “find maybe 20 or 30 women,” he actually found 8,000.

Female leadership within mosques is somewhat rare and debated still today, but it’s certainly not unprecedented. Women-only mosques have existed in China for hundreds of years. Al-Rashid Mosque in Alberta - the first mosque in Canada – was started by a small group of women in the 1930s.

While these examples are not meant to disqualify the serious inequalities that many Muslim women do certainly face, it is meant to counter and contribute nuance to a conversation that is often driven by generalities and stereotypes.

Those of us who are fortunate enough to exercise freedom of speech have the opportunity to discuss these issues constructively, rather than combatively. This brand of negativity is not only hurtful, but perpetuates fear and hinders progress. It festers, causing violence and destroying lives.

The way we talk about people is critical to addressing inequality. Some of the article comments I’ve included are unnecessary and shameful. Whether it’s through a computer screen or in daily human interactions, we need to be mindful of all of our words and actions.

It doesn’t matter if it’s a joke. It doesn’t matter that these comments are from “fattman” and “pjh4864”; anonymity doesn’t erase the impact of your words. The social justice movements of the 20th century have taught us the importance of attitude and speech in changing the way people are treated day-to-day and overall. We need to take action against ignorance and hatred by taking those lessons to heart.

That’s where you come in. This begins in your community, in your workplace, in your school, in your home. If you make an effort to be educated, inquisitive, and respectful, you will be part of a generation that’s better than fear-mongering, better than hatred, and better than bigotry.

For Deah, Yusor, and Razan: we need a change.