London Is Going to Get Over 100 New Drinking Fountains — But What Do Londoners Think?

Global Citizen went to find out.

Why Global Citizens Should Care
Single-use plastics are used for mere minutes but can take centuries to decompose. Plastics in landfill can leach into the surrounding environment, polluting groundwater, and if washed into the sea can harm marine life. A million plastic bottles are bought every single minute around the globe, and less than half of these are collected for recycling. You can join us in taking action on this issue here.

Plans to build hundreds of water fountains across London were launched on Friday by the Mayor of London and Thames Water.

The joint project will hope to begin installations in spring 2019, and new fountains will be found in shopping centres, museums, business districts, large stations, and other busy public areas.

The plans are part of the mayor’s work to cut down on single-use plastic bottles — 7.7 billion of which are bought across the UK each year.

“For many years, our public water fountains were discarded and neglected, whilst single-use plastic waste soared,” said mayor of London, Sadiq Khan

“We’re determined to reverse that trend and help deliver hundreds more free public fountains in the capital for everyone to enjoy,” he said.

The new fountains will add to the 20 pilot water fountains the mayor has pledged to deliver this year. Four of these have already been installed in Carnaby Street, Liverpool Street Station (two fountains), and Valentines Park in Redbridge, in east London.

In less than a month the two fountains at Liverpool Street Station dispensed 8,000 litres of water — the equivalent of 16,000 water bottles. Since June 2018, the water fountain at Kingly Court on Carnaby has refilled bottles over 14,000 times.

Thames Water will install and maintain the water fountains drawing from a £5 million fund. Councils, businesses, and other venues can register their interest in receiving a water fountain online.

Steve Robertson, chief executive of Thames Water, said: “Nurturing and protecting the environment is a core mission for Thames Water and we are proud of the high quality of our tap water.”

“By making it even more accessible for Londoners on the move we can together limit the use of millions of single-use plastic bottles which sadly end up in landfill or in our rivers and oceans,” he added. 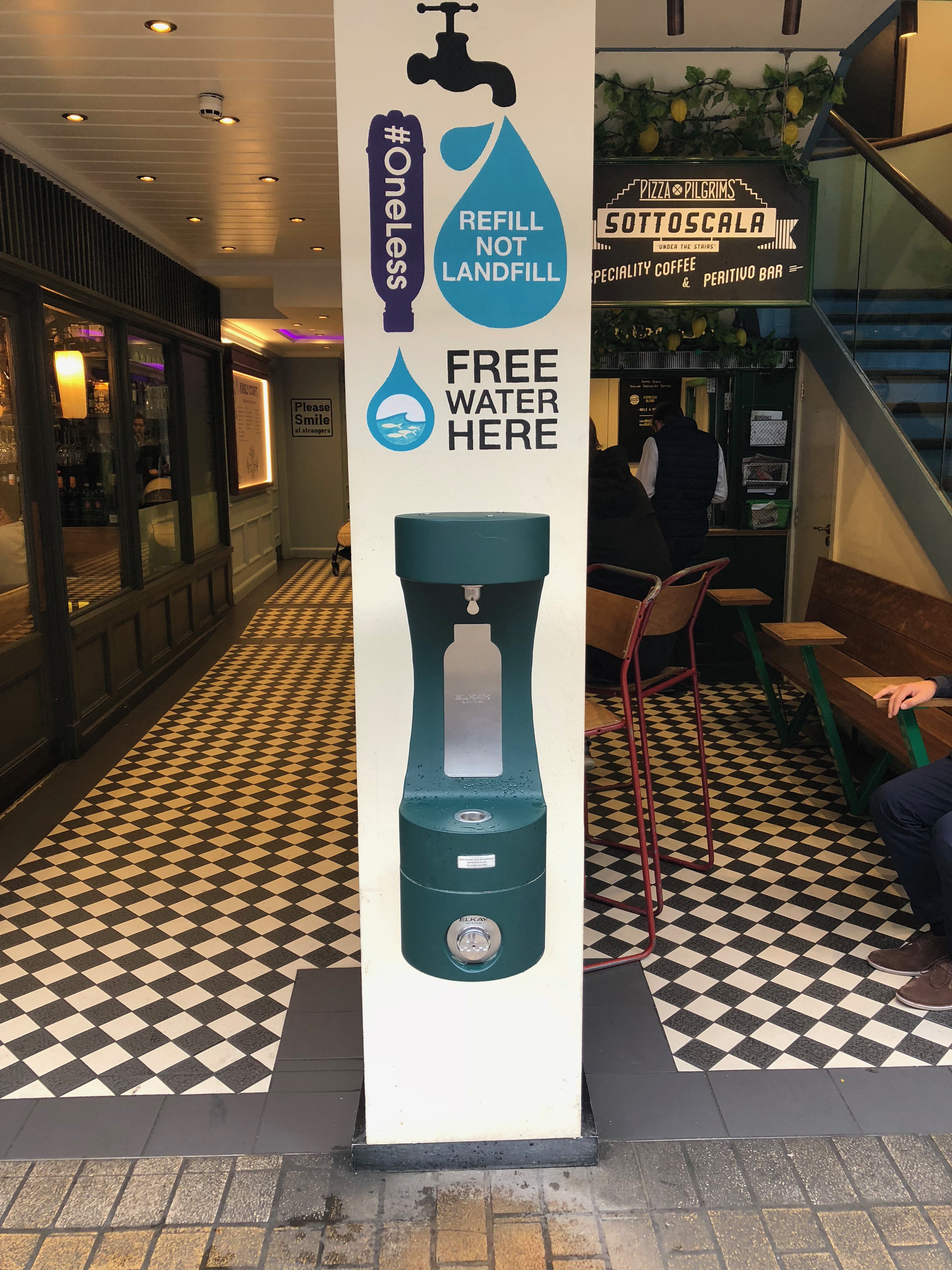 But what do Londoners think about the four pilot water fountains that have already been installed in their city? Global Citizen headed out into the capital to find out.

Agatha Sawicka, a 19-year-old UCL student, said that she wasn’t expecting to find a fountain in the busy Carnaby Street, when she stumbled across one located inside the courtyard of the 3-storey shopping hub Kingly Court, in Soho.

“When I’m somewhere I’m always looking for one, because I want to refill. I carry my bottle everywhere,” she told us

Meanwhile, Filippo Locatelli, who works at Terrone & Co. coffee roasters behind the fountain, said that he liked the idea. He’s seen a lot of people refilling their bottles, and said he thought it was good for the environment.

However, he was concerned that only people with a water bottle or cup can use them, since the water comes vertically down from a spout.

“I come from a small town in Italy, and it’s normal for me to have fountains around — they’re easy to access though,” he said. “If they make it easy to drink from, more people will come.”

He said that he gives out cups every day to passersby confused about using the fountains. Although he did specify that the cups he gives out are biodegradable, and if they weren’t, he wouldn’t give them out. 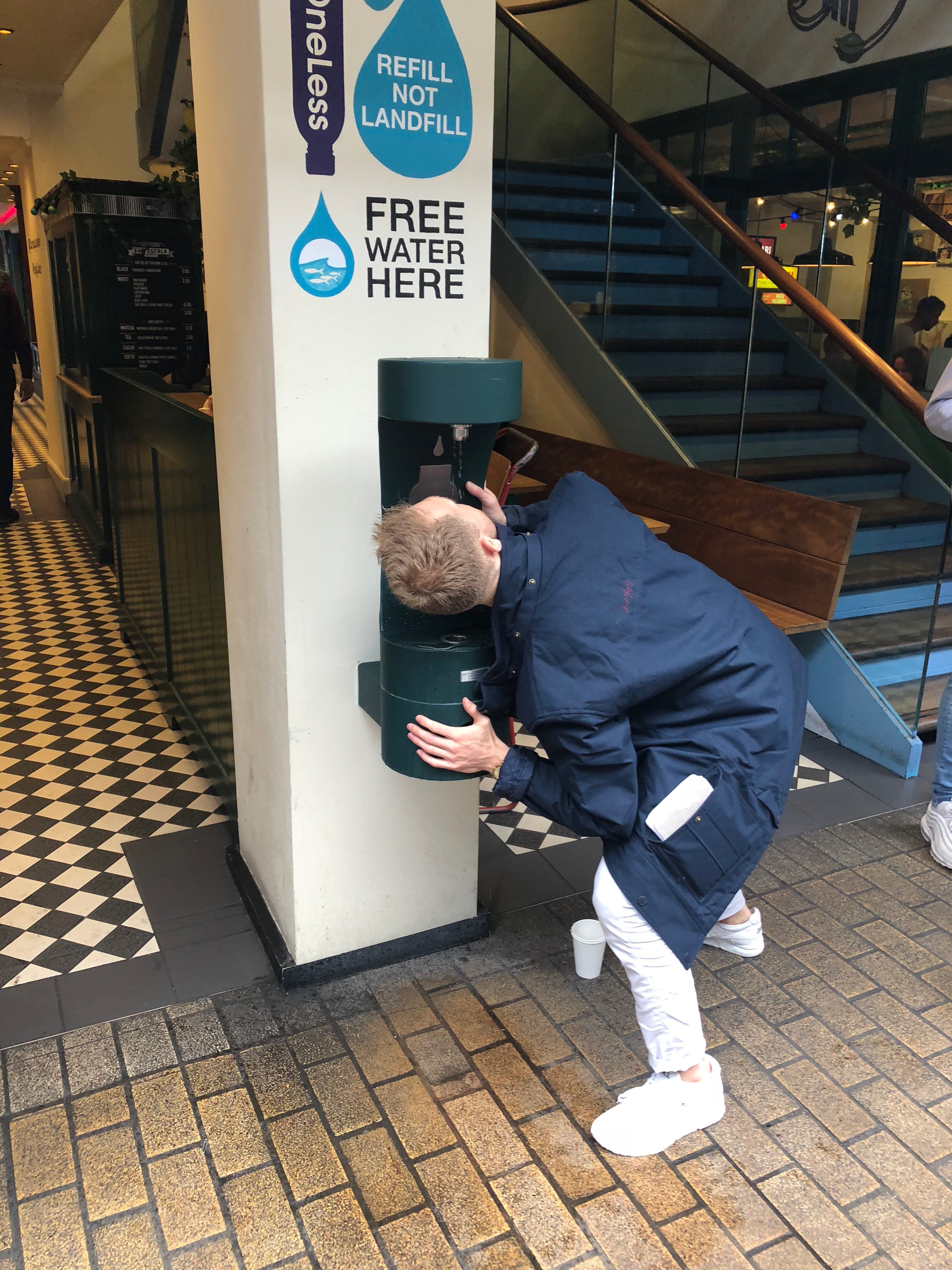 The water fountains are difficult to use without a bottle. Joshua James Parfitt

“It looks ridiculous. When I see someone trying to drink from it I think ‘should I stop him?’ he said. “It would be easier if the design is changed and you can drink and go.”

The water fountains installed at Liverpool Street Station and Valentines Park are of a similar design, and are manufactured by MIW Water Cooler Experts.

It is not yet clear what design the hundreds of new fountains in the joint mayor of London and Thames Water project will take — with no change in design could be restricted to water bottle users.

There are incentives however for the public to simply carry around more reusable water bottles: the mayor also supports Refill London, which has recruited more than 2,000 businesses and venues — including Costa, Starbucks, and Leon — to fill up water bottles free of charge.

A map of participating businesses can be found on the Refill app.