Watching Your Loved Ones ‘Survive’ Polio — a Brother’s Reflections

Looking back, I realize I was one of the lucky ones, not only in India, but in my family.

This piece was contributed by Tony Parthasarathy, brother of polio and smallpox survivors.

Growing up in India, I never considered it to be a "poor" country. It wasn't that I was ignorant that there were people who were worse off than others, it was more that for me, this was a reality and my family was comfortable enough that we never faced financial challenges that one associates with poverty. We never went hungry, we never wanted for a quality education or clean water. My sisters were given every opportunity that my brothers and I had. But one thing that we did not escape was the spread of diseases that were common in India at the time, particularly polio and smallpox. Diseases spread more frequently and rampantly through large populations and vaccines were not always accessible or affordable.

My childhood was relatively "normal." The youngest of six children, I grew up with my three sisters and two brothers in a large home in Chennai, with a big garden, servants and lots of family and friends in nearby streets and homes. 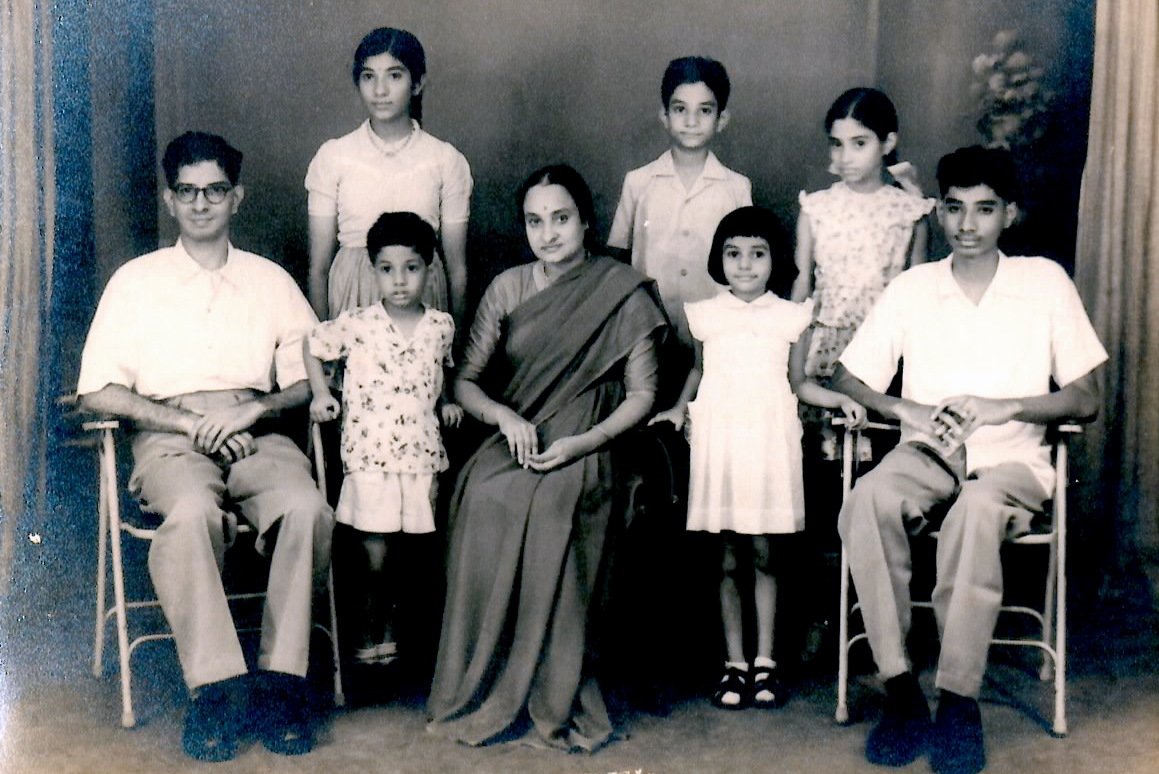 The author with his brothers and sisters.

My sisters and I were always active and took it for granted that we always would be. We played every sport we could; tennis, table tennis, swimming and badminton in the local club. Our youth and vigour, our level of activity, was part of the freedom that I can only say is unique to a world without mobile phones.

Looking back, I realize I was one of the lucky ones, not only in India, but in my family. My older brothers were not so lucky. My oldest brother, Ram, contracted the polio virus when he was a toddler. This left him with a limp, lots of pain and discomfort, and an affected gait. Although he was still able to walk, which is better than some polio survivors, his walking pattern still drew attention. Ram drew as little attention to it as possible and didn’t use any walking aids. His difficulty walking persisted and has worsened. In a country like India, the effects of polio can make life hard and lead to social exclusion, difficulties finding a spouse and building a life with this “dark mark.”

Throughout the years that I was playing in national badminton tournaments and running around carefree, Ram was battling daily against not just the reminder of disease that had changed his life, but also against all the stigmas that were put in his way.

Where walking was a problem, he has sought to defy gravity and literally reach for the stars. Ram is an Electronics engineer par excellence and excelled in Satellite design, construction and launch. He travelled extensively for his work and earned many accolades and acclaim for his work in India before he decided to further his prospects in the USA.

In the USA he was again much sought after as a Satellite expert and worked with reputed and well-known companies such as Boeing Aerospace and still continues to work as a consultant in the industry (albeit on a part-time basis).

He is married to a wonderful woman, who acknowledged and embraced his walking difficulty and has been his pillar of strength and support. They are happily married and take delight and enjoyment in seeing their daughter and son grow up fit and healthy in polio-free countries and Ram, as best he can, entertains and amuses his five curious, active, and lovely grandchildren in the USA.

Ram never mentioned the effect of polio on his life and, to be honest, I rarely thought about it when I was younger.  But as time wears on and it's becoming harder for my brother to travel because of his polio-affected leg I reflect on how this disease has made it harder for him to travel long distances and affected parts of his life that I take for granted.

His own reflections are even more poignant. As he says, "Based on my experience ... it is best not to be a polio survivor — especially after seeing some people who have been left terribly crippled, deformed and sometimes struggling to even breathe. I am supposed to be among the 'luckier ones' who have got off relatively lightly. But even then life was and is a burden. Thus, prevention (eradication) and not treatment or survival, should be the goal."

I don’t know why my brother wasn’t vaccinated against polio — the vaccine was in use in India at the time, but not in as wide a circulation as it is now and certainly not mandated as a part of childhood immunisations.

In 1988, prior to the creation of the Global Polio Eradication Initiative (GPEI), polio devastated the lives of over 200,000 children in India each year. The first national polio immunization campaign didn’t take place until 1995. As late as 2009, more children in India were affected with this horrific disease than in any other country.

I remember that life was not easy for Ram as a result. I’m sure he wished he could be as active as the rest of were and, in his words, the main lesson is that this was all preventable.

Ram’s fight with polio at such a young age was, sadly, not the only health tragedy that touched the boys in my family. My second oldest brother, Sundaram was also only a young child when he fell ill with smallpox, which was still considered fatal in 1967. By 1977 thanks to the efforts of the World Health Organization, Rotarians, and others, smallpox became the first human disease in history to be eradicated.

This vaccination spree still came too late for Sundaram who bears the scars — physically and otherwise — of his fight against smallpox.

He, too, is an engineer, and has had a highly successful career with one of India’s top heavy automotive engineering organizations. He also married, lives in and looks after our family’s property and travels regularly. A disease that's known for attacking and crippling several organs and functions, Sundaram does not have children but is a wonderful uncle to his 12 nieces and nephews, their spouses and a growing number of great-nieces and nephews.

As I sat back and reflected on what my brothers faced in the lead-up to this World Polio Day, I could not help but be shocked by how lucky I was to escape diseases like polio, smallpox, tuberculosis and others which were all rampant in India at the time. Prevention really is the best cure as I received both the polio and smallpox vaccines. I, too, am an engineer (that part runs in the family). A chemical engineer, in fact, and it is my belief in chemicals, in compounds that mix in just the right way to form live saving vaccines that I bring to these stories — which in all other ways are not mine to tell.

Vaccines could have given my brothers the uncomplicated, carefree childhood that I had. Instead, my family and I watched them battle against diseases that could have killed them. 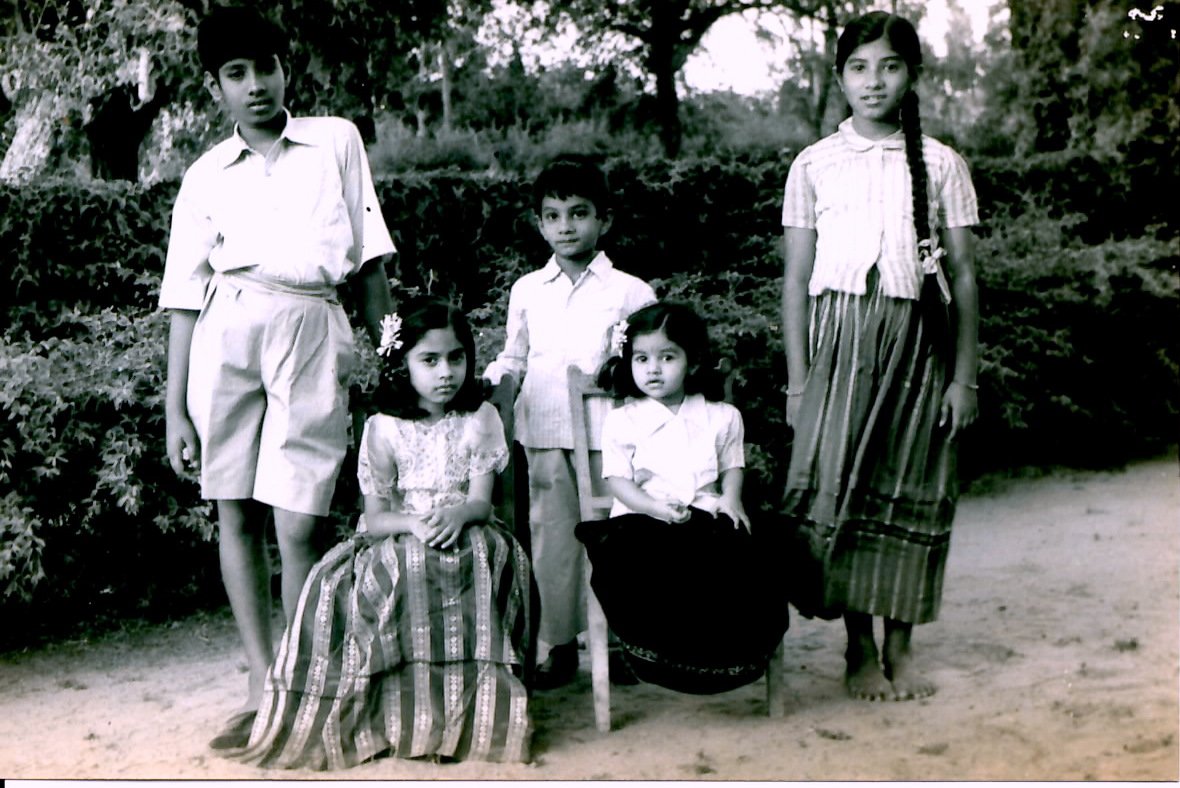 Ram and Sundaram with sisters.

Their stories are a reminder that I come from a country where polio and smallpox are only a vaccine away from resurgence. Though the last case of polio in India was in 2011 many families still do not have the access or means to afford the vaccines and it is only because of contributions and vigilance from the international community and health workers that polio has been kept at bay.

It is crucial to remember we are all only one outbreak away from another polio epidemic. While the world is 99% polio free, we need one last push to make sure it is the second human disease in history to be eradicated. I would love to see this happen in my lifetime, and in Ram’s lifetime, the way Sundaram has been able to see life without the threat of smallpox become a reality in his lifetime

Polio and smallpox didn't stop my brothers from achieving great things and, if anything, made them stronger, more resilient, and determined. However, they also had the means and encouragement to access good medical care, family support and comparatively milder symptoms than other survivors. For some families around the world, who don't have the money or whose children have difficulty even with the basics because of their symptoms, living with polio is a life or death sentence.

Would my brothers’ lives have been easier, more carefree if they had both had a simple vaccination? Of course, and I'm sure both of them would jump at a chance to go back and change history on that front.

We can't go back into the past and these crippling diseases affected their lives and touched our whole family. But we can learn from their stories, so that past mistakes and oversights are not a part of any child’s future.

Vaccination is quick, easy, and affordable and we need to support the workers who administer polio vaccines daily in the most dangerous parts of the world to make sure that those of us in New York, Germany and elsewhere, never feel the effect of polio again.