Courtesy of Farhad Wajdi
Why Global Citizens Care:
Women in Afghanistan face high rates of poverty and violence. Farhad Wajdi’s efforts have helped women to gain a greater degree of economic and social independence, in line with the United Nations’ Global Goals You can join us in taking action on this issue here.

Farhad Wajdi is not an engineer. He didn’t go to school for engineering, and he certainly didn’t get trained as one.

Yet he builds solar-powered food carts that people around the world are interested in buying and he also developed a biomass, low-pollution stove.

Wajdi’s resourceful, can-do attitude is not in service of gadget tinkering or exciting lab experiments that can be posted on YouTube. Instead, he’s trying to transform Afghanistan by empowering women, kickstarting the economy, feeding the homeless, and cleaning the environment.

His socially-minded ambition has earned him accolades and worldwide recognition in recent years and now he’s being honored with the Waislitz Global Citizens' Choice Award, which includes a $50,000 cash prize.

Wajdi plans to invest the prize money into his solar-powered food cart cooperative called Banu’s Kitchen, the cooperative he developed in 2018 to empower women as part of his larger social entrepreneurship nonprofit Ebtakar.

"The award will help my nonprofit buy necessary equipment for our upcoming project of launching 1,100 solar-powered carts, which will help 2,200 Afghan women to escape extreme poverty, and will encourage thousands of Afghan women to do businesses fearlessly," he told Global Citizen over email. "Out of 1,100 carts, we will produce 500 food carts which, as part of our social cause, will provide free food to hundreds and thousands of Afghans susceptible to hunger. Also, through specially designed food wrappers, we will educate millions of Afghans on climate change." 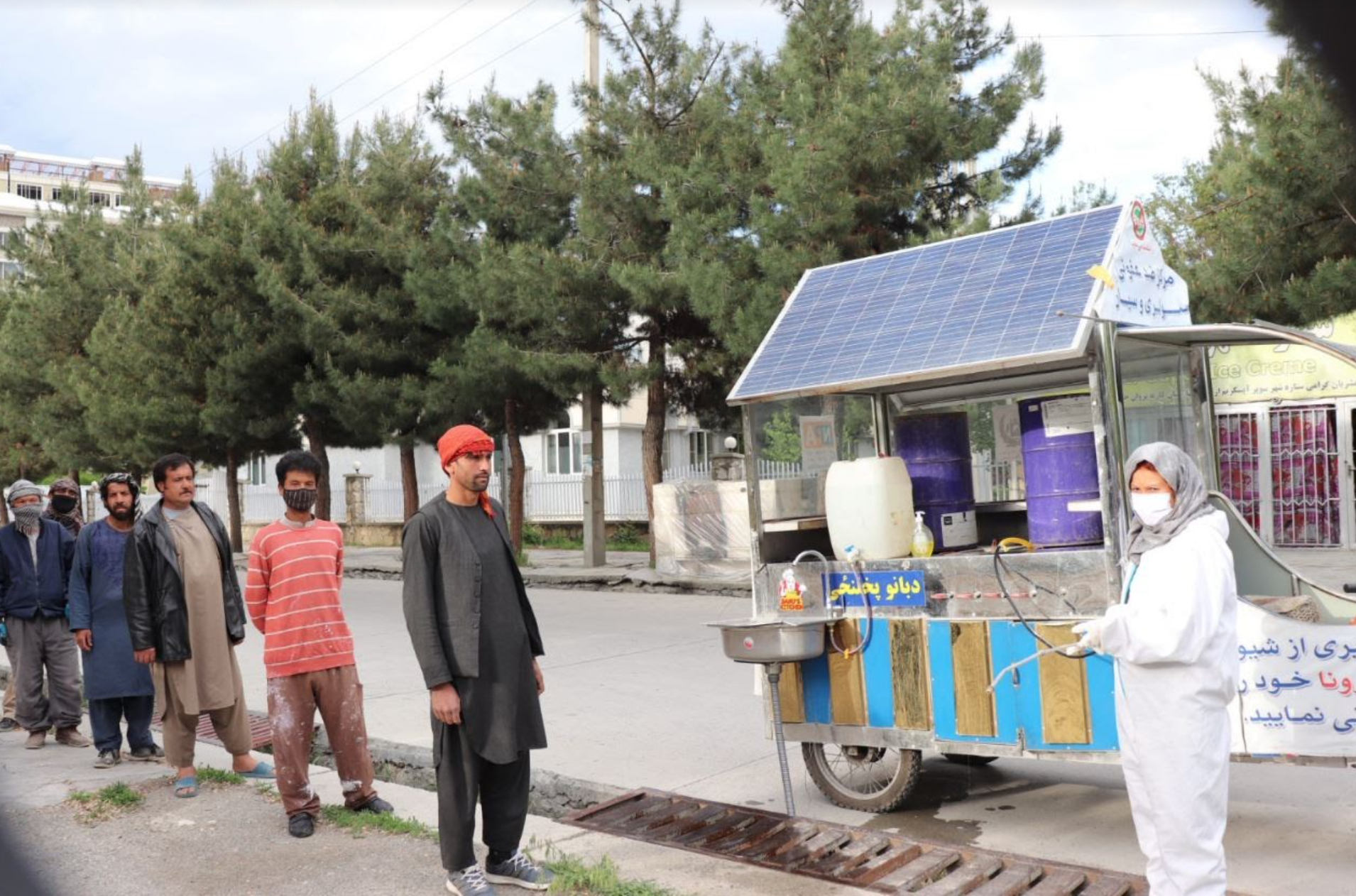 The food carts have been converted into COVID-19 disinfectant stations in recent months; Courtesy of Farhad Wajdi

Maryam Mohammdi was jeered at when she first drove into the streets of Kabul in a blue, solar-powered rickshaw carrying a food cart to serve burgers and rice to the city’s workers and pedestrians, according to Reuters.

She was a woman entering the world of street food, a terrain traditionally dominated by men. But Mohammdi was part of a wave of Afghan women seeking to make Afghanistan more equitable for future generations. Through the food cart, she earns a wage that helps support her family and gives her a newfound degree of independence.

Eventually, her customers came to appreciate the excellent food and fair prices.

"Even men now cheer me on and say our food is delicious and healthy," she told Reuters.

Wajdi hopes to replicate this story of economic and social empowerment hundreds, thousands, and even millions of times around the world. So far, around 100 women have been able to operate their own food carts through Banu’s Kitchen.

Wajdi was born in Afghanistan but spent more than a decade in a refugee camp in Pakistan while growing up. He knows firsthand the struggles of being an outsider.

"When I was a refugee, I knew really well how it felt to be excluded," he said. "When I put myself in an Afghan woman’s shoes — when [I think about how] you’re excluded from opportunities, when you’re made fun of like, 'Hey! look, this is a woman,' or, 'Hey, look! This is a refugee,' that really drives me to this noble cause."

"I really want to help refugees, the impoverished, the vulnerable, the excluded members of my community," he said.

Wajdi decided to focus on food carts because it seemed like an effective way to overcome gender barriers and gain community support in Afghanistan, a country that, despite gains over the past decade, remains deeply hostile to women both within and outside the domestic sphere.

"We wanted to involve women in a male-dominated occupation so we could give a message to our community that there isn’t anything wrong with a woman doing a job or business typically considered for men," he said.

At first, the community responded negatively to the initiative and it received a lot of pushback. Wadji continues to receive death threats to this day and some of his friends working on women’s empowerment issues have been killed.

"My good friend, she was a women’s rights activist. She was a very nice human, she was studying at the American University, she was a very bright student, but she was killed," he said.

"We’re living in threats," he added. "We are habitual to these threats. When I go out of my office, I don’t think I’ll return home. It’s a usual thing for Afghans."

Afghanistan has been mired in conflict for the past four decades, and violence has intensified following the United States' intervention in 2001. Large-scale attacks are common in Kabul, and civilians are regularly targeted and killed.

While Wajdi was fearful, he managed to engage with community members over time and began to earn support for the food carts and the idea of women being able to work.

With a coalition of religious scholars, women activists, and youth leaders, Banu’s Kitchen became an accepted part of Kabul life.

Women earn a flat rate of around $5.20 a day, which is higher than the median income and enough to comfortably live on, and commission for their sales, Wajdi said.

Many women have found economic and social independence through the cooperative.

"There was a woman who was unfortunately tortured by her husband, so we helped her get a divorce, and this job has been a life-saving place for her," Wajdi said. "She didn’t have any means to support her kids, but now she got divorced and she’s very happy."

When the pandemic arrived in Afghanistan, the government imposed lockdown measures that prevented food carts from serving food in the streets of Kabul. The women who relied on the job for income were faced with the looming potential of poverty.

But then Wajdi got the idea to convert the carts into mobile disinfection stations. 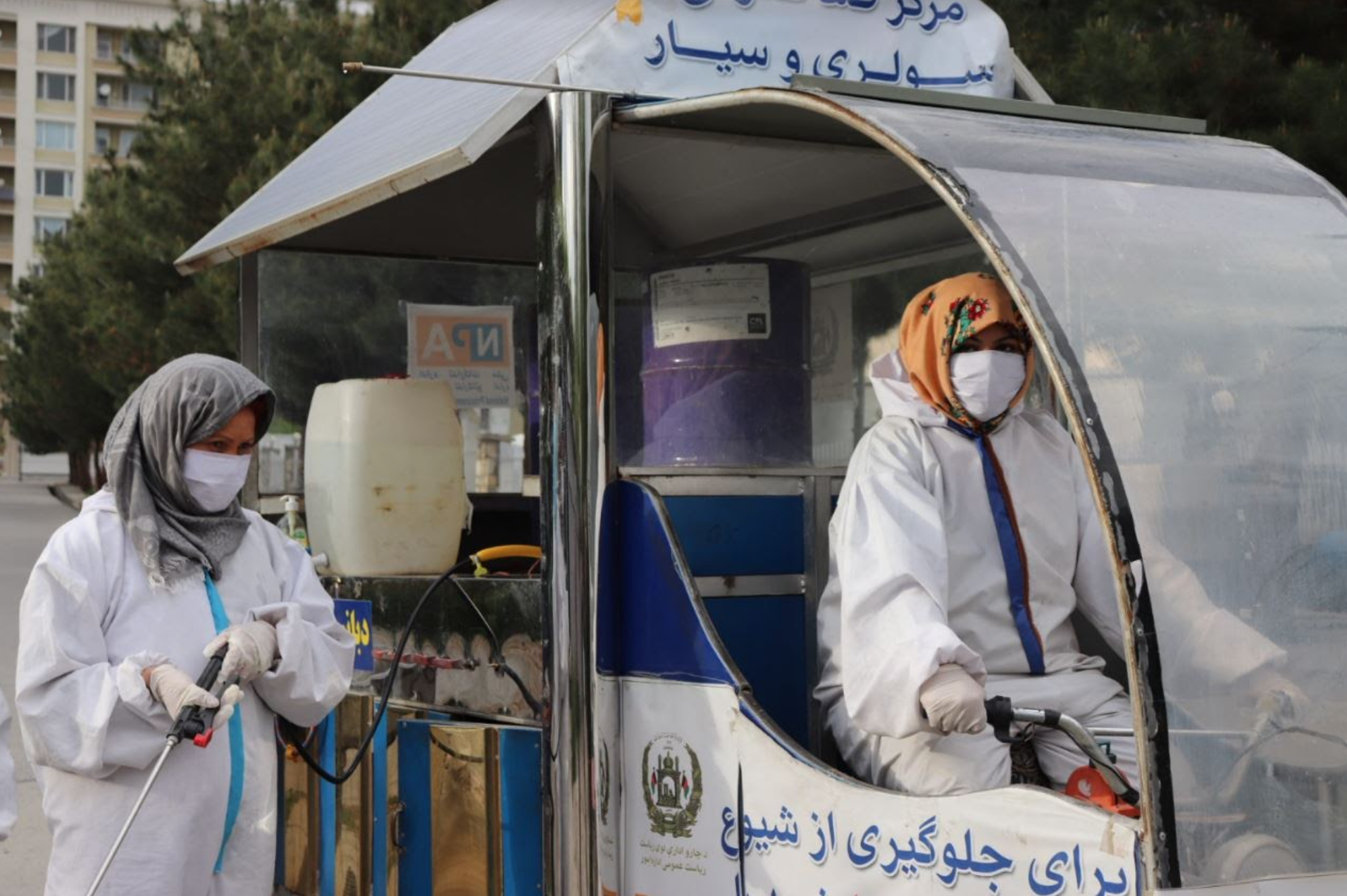 Ebtakar received grants from the United Nations, the Afghan government, and other organizations to bring the idea to life.

Nowadays, Banu’s Kitchen employees are decked out in hazmat suits and the food carts have been repurposed with free handwashing stations and disinfectant hoses. Instead of burgers and rice dishes, people are now served free masks. The women earn money by disinfecting local businesses and buildings.

Wajdi is part of a growing movement of social entrepreneurs that prioritize human development, environmental integrity, and other holistic concerns over profits.

"We have to design social businesses that should not be working to maximize the profits of owners or stakeholders, but should work for a social cause," he said. "Empower your community with the help of social entrepreneurship."

Wajdi is doing just that in Kabul.

With the Waislitz prize money, he hopes to significantly expand Banu’s Kitchen and ultimately bring it to more countries. The Afghan government recently promised 11,000 old motorbikes to Ebtakar, which Wajdi takes as a sign of growing institutional support.

Related Stories July 9, 2019 This Kenyan Activist Is Fighting One of the World's Greatest Health Risks

"We will be producing smokeless heaters, employing women to collect biomass, who will go into the mountains of Afghanistan collecting pine needles," Wajdi said.

"It’s a technology that can be made anywhere," he said. "That’s the most intriguing part in my story — I’ve always believed that necessity is the mother of invention. I did a lot of failed experiments, and I turned out to be an engineer."