Voter Registration Surges After a Simple Reminder on Facebook

Could this tilt the election? 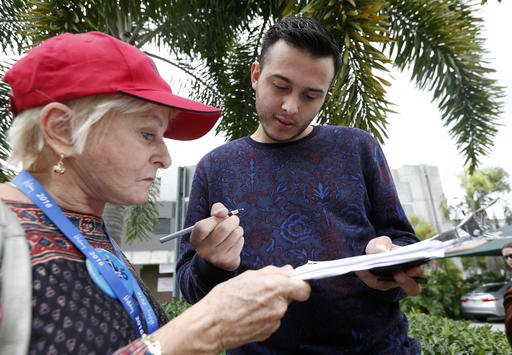 A colorful box appeared at the top of Facebook’s news feed for four days in September. It said: “Are you registered to vote? Register now to make sure you have a voice in the election.”

This gentle nudge led to huge voter registration surges across the US, a reminder that Facebook has enormous influence in shaping both personal perception and civic participation. 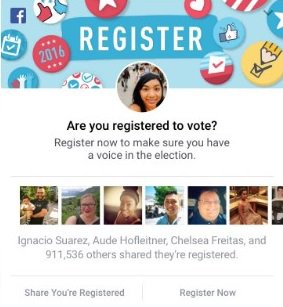 With the help of the call-to-action, California had its fourth-highest online registration day in history on Sept. 23, with 123, 279 people signing up or updating their information. Indiana had its third highest total and Minnesota recorded its highest volume for a single week.

Oregon, Pennsylvania, and Washington also saw huge increases, which officials around the country attribute, at least partly, to Facebook.

“I applaud Facebook for joining our efforts to increase voter registration awareness,” Brian Kemp, Georgia’s secretary of state in a statement.

Perhaps the most significant outcome of the campaign was who ended up registering: young people. Seventeen percent of registrants were between ages 17-25, and 30% were between 26-35.

Historically, young people don’t vote. In 2014, less than 20% of people aged 18-29 said they voted in the federal elections, the lowest figure of all time. In the 2012 presidential election, youth turnout was 45%.

Read More: Voting in Ohio: Everything You Need to Know

Improving youth engagement has been the mission of countless advocacy groups around the country, including Global Citizen.

Every fall when the school year starts, droves of volunteers try to register people. Throughout the year, voter registration drives go door-by-door, persuading people to get involved in upcoming elections. This person-to-person, neighborhood-by-neighborhood approach is effective, but it can never achieve the reach of Facebook.

Some states such as California and Oregon are introducing automatic registration systems to boost participation and are saving money and time in the process.

Read More: Voting in Florida: Everything You Need to Know

Facebook could become an important part of this effort, and the neutrality of voter registration must be appealing to the platform.

Earlier in the year, Facebook was attacked for how it served news to its users, with critics arguing that curated stories reflected bias. For many people, it was a turning point. It showed the dominance of social media over traditional media and how echo chambers can sometimes be impenetrable.

But the foray into news suggested that Facebook wanted to play a role in keeping people informed.

Read More: Voting in Nevada: Everything You Need to Know

Facebook does foster a sense of community, something that is vitally important to the culture of voting. When people feel that their vote is part of a larger movement, joining other people’s votes to achieve a specific vision, then voter turnout increases.

To that end, Facebook will be reminding people everywhere to vote on Nov. 8, like it has since 2008.