Who Will be Your Next Prime Minister? Polls Prove Young People Will Decide

What if you could change the world? 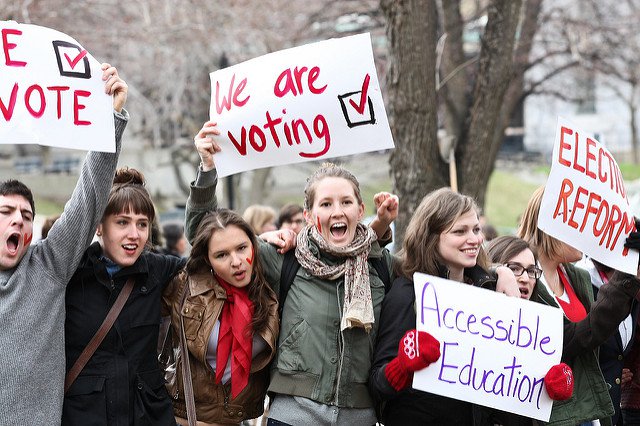 What if you could change the world?

Not in a John Lennon-lite, gap year friendly, be-nice-to-your-Mum-and-it-will-all-be-fine kind of way. I mean really change it. What if you could divert the future of your society in the direction you wanted? Stamp your authority on the world around you, switch the winds, and reinvent history? What if you knew, without any doubt, that something you did truly made a difference?

This is it. On June 8, you must go to vote. Whatever box you tick matters much less than the act of voting itself, and this election will rest on whether or not you make the polling station.

Not convinced? Let me try and talk you into it.

Every poll is different. But there’s an important reason why they are so polarised. Polls predict turnout, and the result changes dramatically based on what demographic they think will show up. It’s all in the data — whether or not young people vote could be the difference between a majority government and a hung parliament.

Most of the polls are typically pessimistic. Bluntly, most just don’t think young people will show. Just 40% voted in the first three elections of the 21st century, down from 60% in the decade before. Likelihood of voting decays with decreasing age. But the polls have had a bad year. A change is coming, and the status quo is set for another shock.

Related Stories June 2, 2017 Global Citizen Election Guide: Where Every Party Stands on Gender Equality, Refugees, and More May 3, 2017 Emma Thompson Has a Message for You: 'Get Off Your Arses and Vote!' Nov. 17, 2016 The Age Gap: How the Old Defied the Young on Brexit & Trump

Over a million young people have registered to vote since Theresa May called the snap general election on April 22. Almost half a million — fashionably late, of course — left it until the last valid day to register on May 22. Nearly a quarter of a million were 18-25, whilst 207,000 people were aged 25-34. These are gargantuan numbers; the kind of stats that need projecting onto the sides of skyscrapers to give due justice. But by contrast, on the same deadline day, just 10,000 people over the age of 65 registered.

Don’t underestimate this spike. On the final registration day before the 2015 general election, 137,400 under-25s registered. Before the EU referendum, the figure was 132,029. Hundreds of thousands more young people are now able to vote, and hard facts suggest they’re going to use it.

🔈 This is a letter to the young people of Britain: There is too much at stake to not vote - #TurnUp on the 8th June & have your say! ✊🏼✊🏾 pic.twitter.com/KswdSzQ33D

The tide is rising. An ICM poll, commissioned by HOPE not hate and supported by the National Union of Teachers, found that 63% of 18-24 year olds are “absolutely certain” to vote in the election, marginally less than the actual youth turnout in the EU referendum. Justin Trudeau swept to victory in Canada precisely because young people voted in droves. 2017 could be our year.

“These figures reveal that young people are far more interested and engaged in politics than many people think,” Nick Lowles, chief executive of HOPE not hate, told the Independent. ”If 63% of young people vote in this election then they could influence the result in several dozen seats. Political parties need to take young voters seriously."

Apathy is idiocy — don’t pretend like it doesn’t matter. Just follow your gut to fight for what you believe in. At this election, 54% of young people said that the NHS was their most important issue. Brexit is a top priority for 26%, and education leads the way for 22%. But one thing is absolutely clear — young people care in spades.

Vote for whoever you like. Just remember that this election belongs to you. Take it.