Visible from space, the world’s largest solar plant switches on in the Sahara

The country will soon be shining with light and new advancements. 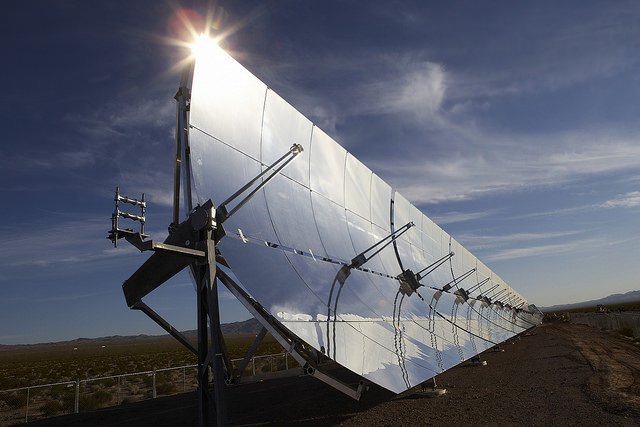 Say hello to the world’s largest solar plant switched on in the Sahara Desert:

Near the city of Ouarzazate, there is hope that it will be able to...

Being the first part of Morocco's solar power plan, this superpower plant is definitely a superhero as it switches on. And this is just the start.

Coming up next: the country wants to install 2000 MW of solar power by 2020. This technology draws on the country’s own natural resources and helps wean Morocco off of fossil fuels.

The new solar plant will be using concentrated solar power, a more expensive but efficient form of solar energy than the traditional common photovoltaic panels.

This week Morocco turned on the biggest solar plant we've ever seen. https://t.co/UiYDiyb0In#renewablespic.twitter.com/tGEygE6xaH

But, here’s something BIGGER than big, the power plant can be seen from space.

This is what Morocco's giant solar plant in the Sahara looks like from space https://t.co/QUreWbsscv@nprnews@nasapic.twitter.com/ToFl6KwZNH

There is no doubt that the solar plant will influence the surrounding area, but, even more broadly, what does this mean for Africa?

A lack of renewable power has been a problem in various parts of the countinent. Only 24% of Sub-Saharan Africa’s population, for instance, has access to electricity and there are an average of 56 days of power-outages per year.

Such unreliability impacts nearly all facets of society.

Businesses, healthcare establishments, and schools have all suffered from spotty WiFI, failing medical equipment and unusable classroom resources. It’s clear that there is a significant link between energy and success. Places and people need energy and electricity to increase productivity and to live healthier lives.

There is a 23% poverty rate in Ouarzazate. Switching on the Noor-Ouarzazate complex will hopefully cut into this rate as people gain the energy to flourish.

When Morocco’s environment minister, Hakima el-Haite commented on the beginnings of the solar power project back in 2015, he exclaimed, “When we heard about the potential of solar energy, we thought; why not?”

Global Goal 7 is all about making affordable and clean energy universal and places all around the world have already hopped on board with solar energy. Many countries are ditching the fossil fuels and saying “why not?” to renewable energy:

France to pave 1000km of roads with solar panels https://t.co/32ku81JkwF#solarpic.twitter.com/D49BOfHGnC

In 2015, Sweden became one the world’s first nations to set a goal of becoming 100% fossil-fuel-free.

In 2015, Costa Rica derived a whopping 99% of its electricity from renewable energy sources.

Countries like Japan, the US, Germany, China and Kenya have also hopped on the bandwagon to use solar energy and renewable sources.

Solar energy is becoming more affordable through tax credits, incentives, grants and, most importantly, technological breakthroughs. Not only are individuals able to purchase solar energy at subsidized prices, but they are able to create a cleaner environment--double whammy.

What an exciting time to be a global citizen!

Clean energy has the potential to lift millions out of poverty because it affects climate change, economic development, health and so much more.

This superpower plant is one huge step towards finding a sustainable and clean tomorrow, but never forget that every little step along the way helps achieve Global Goal 7!