The fake news article was the world’s 12th most engaging story on Facebook in January.

Like 500,000 other people in January, you probably saw this viral story on Facebook. It has remained the 12th most liked, shared, and commented story in the entire world for much of the month.

And for good reason: the story claimed that a “disastrous” flu shot administered by an anonymous doctor at the US Centers for Disease and Control (CDC) has caused a deadly flu epidemic that has already killed several people across the US.

Yikes. It’s a terrifying tale about a fatal medical mishap. It confirms the suspicions of people still wary about vaccines.

Worst of all, it’s fake.

But that hasn’t stop thousands of people from sharing the story, adding their own commentary, and urging their followers to avoid getting a flu shot during what has become the worst flu season since 2009.

Numbers of people infected by the virus are set to surpass infections from the 2014-2015 season, when 34 million Americans got the flu and more than 56,000 people died, according to the New York Times.

Just to debunk the lie at the heart of the popular story, the flu shot cannot make you sick. The vaccine actually protects recipients from the flu viruses that research predicts will be most common.

In addition, the CDC regards this flu season as “moderately severe” and compiles weekly data summaries detailing the incidences and distribution of influenza on its website. 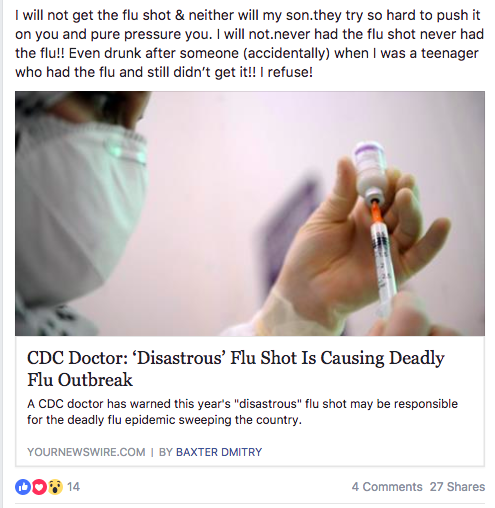 Read More: How Fake News Could Lead To A Global Epidemic

But for many people, the story served to confirm fears and conspiracy theories about flu shot health risks, notions that drive down the rate of vaccinations.

According to the CDC less than half of US residents older than 6 months got the flu shot during the 2014-2015 flu season.

Others who glanced at the alarming headline on Facebook did not realize that the deceptive flu story appears on the “fake news factory” YourNewsWire and does not cite a single source to back up its wild claim.

No matter. Once it hit Facebook, the story quickly spread, appearing in more and more News Feeds as it accumulated Likes and Comments. The article reached nearly 500,000 people between January 11 — the day Facebook changed its News Feed to emphasize posts from friends and family over companies — and January 23, according to a report by Media Whip.

Global Citizen campaigns on ensuring all people get accurate information about their health and have access to safe, affordable healthcare. You can take action here.

Though Facebook has very publicly tried to combat the misleading, incomplete, or outright false information that sweeps through social media, a new report by the social media tracker Media Whip demonstrates that their efforts have so far failed to stop the spread of fake news articles.

Like the flu virus itself, such stories target susceptible people and spread from person to person. They reach them via social media algorithms, which figure out and promote information we are most likely to engage with. They tap into our fears and seem to confirm our suspicions. That means we are more likely to take them at face value without considering the source or the lack of actual research or evidence.

Since Facebook and other social media platforms have not yet figured out how to prevent the spread of disinformation, it remains up to individuals to identify the false stories themselves.

Take YourNewsWire, for example. An online search reveals that Google’s Adsense network last year banned the site from promoting their stories because of its penchant for lies.

When in doubt, FactCheck.org says, check to see if other sources are reporting the same story.

“Many times these bogus stories will cite official — or official-sounding — sources,” FactCheck.org says. “But once you look into it, the source doesn’t back up the claim.

Ultimately, the site says, “news readers themselves remain the first line of defense against fake news.”