The US Resettled 10,000 Syrian Refugees — Which Cities Are They Calling Home?

Some little cities are stepping up to help solve a big problem. 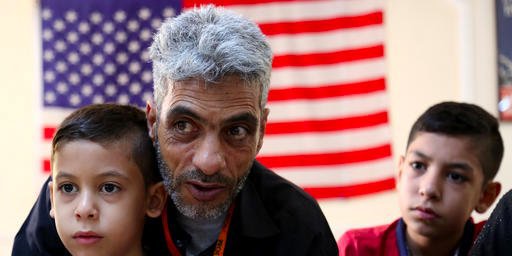 The US took in its 10,000th Syrian refugee this week, reaching its resettlement goal one month ahead of schedule. Refugees have been a hot topic in this year’s election race, with some candidates calling for their exclusion and others advocating for more open policies. Since thousands of refugees have arrived without incident, the current administration hopes to work with Congress to increase next year’s target by a few thousand, because a pledge of 10,000 is meager compared to other countries’ commitments.

Read more: US Is Resettling is 10,000th Syrian Refugee This Week

Still, there are 10,000 Syrian refugees who, as of this year, can call the US home, a far greater number than the 1,682 who were resettled last year. After going through the rigorous 13 step process and long waits, refugees are welcomed to the US where the State Department and Department of Health and Human Services coordinate with nonprofits to get them settled. In 231 different towns and cities around the country, Syrian refugees are finding joy in having a safe place to live at last. “America is a beautiful country,” one refugee said. “The way they treat people and the people of America are very nice ... when you go down the streets, everyone smiles at you. Even if they don't know you, they just smile at you.”

Today, the 10,000th Syrian refugee will arrive in the US. Find out how you can help at https://t.co/1HwsI2MVd5: pic.twitter.com/YvvrJu0Gzu

The resettlement program has tried to place the refugees in communities with other Syrian immigrants to make the transition easier. If possible, refugees are placed in towns and cities where they have family ties. If they have none, they are placed in cities where the cost of living is low and jobs opportunities are high. So which cities have welcomed the most new refugee residents?

Family who helped mark 10,000th Syrian refugee to reach the US begins finding its way in San Diego. https://t.co/yrdJchIQjK

Chicago now has many new residents, having taken in 469 Syrian Refugees since October.

Dallas and Houston have both taken in a few hundred Syrian Refugees.

But it’s not just the big cities that have been welcoming refugees. Some smaller cities are resettling nearly as many Syrian refugees as their big city counterparts.

ICYMI: 1st Syrian refugee family of 10000 to be resettled in US in 2016 arrived in Missouri https://t.co/uodWqVdUhmpic.twitter.com/aWXViHWBpc

And at just 80 square miles, Boise, Idaho is home to another 108 Syrian refugees.

Though the 10,000 Syrian refugees admitted this year is a huge improvement on past years’ intakes, the US lags far behind neighboring Canada. Between November of last year and this February Canada accepted 25,000 Syrian refugees. Angela Merkel, the chancellor of Germany, famously and controversially announced that the country would admit 1 million refugees, and ultimately took in more. And then there is Turkey, which hosts nearly 3 million Syrian refugees.

Europe does most of the complaining, but Turkey hosts three times as many Syrian refugees. https://t.co/LeVBXP3CPzpic.twitter.com/GOdHwwqWCz

Fulfilling the 10,000 person intake goal is a milestone worth celebrating, but there’s still much more to be done. By the end of this fiscal year, national security advisor Susan Rice estimates the US will have taken in 85,000 refugees from around the world. However, there are still 65.3 million displaced people in the world and the average length of displacement is an astounding 17 years.

The ongoing refugee crisis is not just a Syrian crisis, it’s a global crisis that urgently requires a global solution. There is no doubt that the lives of these 10,000 Syrian refugees, as well as the many others who have been resettled, have been changed, but there remain many millions of people struggling to find a safe place to live. We need to act quickly and compassionately because even one endangered life is too many.