Meet the Woman Fighting for a ‘Clean’ Dream Act

Cristina Jiménez Moreta is a MacArthur ‘Genius’ — and was an undocumented immigrant.

On Thursday, Nov. 9, undocumented immigrants across the country walked out of their schools and workplaces. More than 1,000 showed up on the steps of Congress in Washington D.C. carrying signs, flags, and banners in the largest rally of undocumented youth to take place outside the capitol building, according to Huffington Post.

Not to be deported.

These campus walkouts and the protest in front of Congress are just a couple of the mobilizations organized over the past year by the United We Dream network, a group that advocates on behalf of undocumented immigrants.

The organization is pushing for Congress to pass a “clean” Dream Act by December, which would include a path to citizenship for young people brought to the country by their parents.

At the forefront of this fight is Cristina Jiménez Moreta, a 33-year-old social justice activist who was just named one of 2017’s 24 “geniuses” by the MacArthur Foundation. 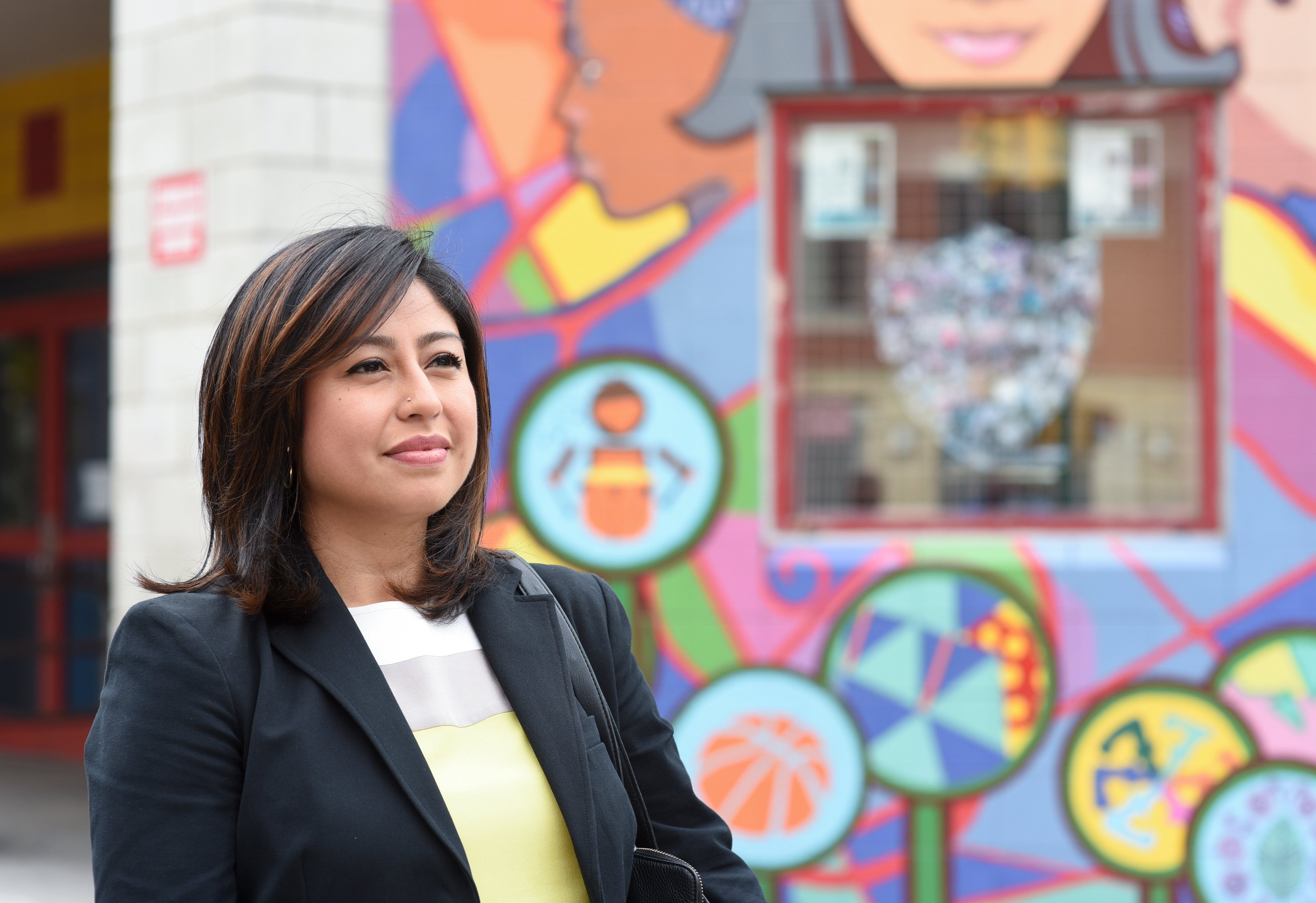 Jiménez, originally from Quito, Ecuador, grew up in crushing poverty that eventually led her parents to seek a better life in the United States. Her father, she says, grew up homeless and always hoped for his children to receive a college education.

Once in the United States, where the family settled in Queens, New York, Jiménez encountered many of the difficulties undocumented immigrants face: limited access to educational opportunities, employment, and other basic services, and the paralyzing fear of deportation.

She became involved in activism during high school, after she found out she wouldn’t be able to attend college due to her undocumented status. (She eventually graduated from Queens College of the City University of New York in 2007.)

She’s now the executive director of United We Dream, which is lobbying Congress to pass a Dream Act that includes a path to citizenship for young undocumented immigrants and their parents.

Global Citizen spoke with Jiménez on the phone about the immigrant experience, the fight for a “clean” Dream Act, and how to be an ally to undocumented immigrants: 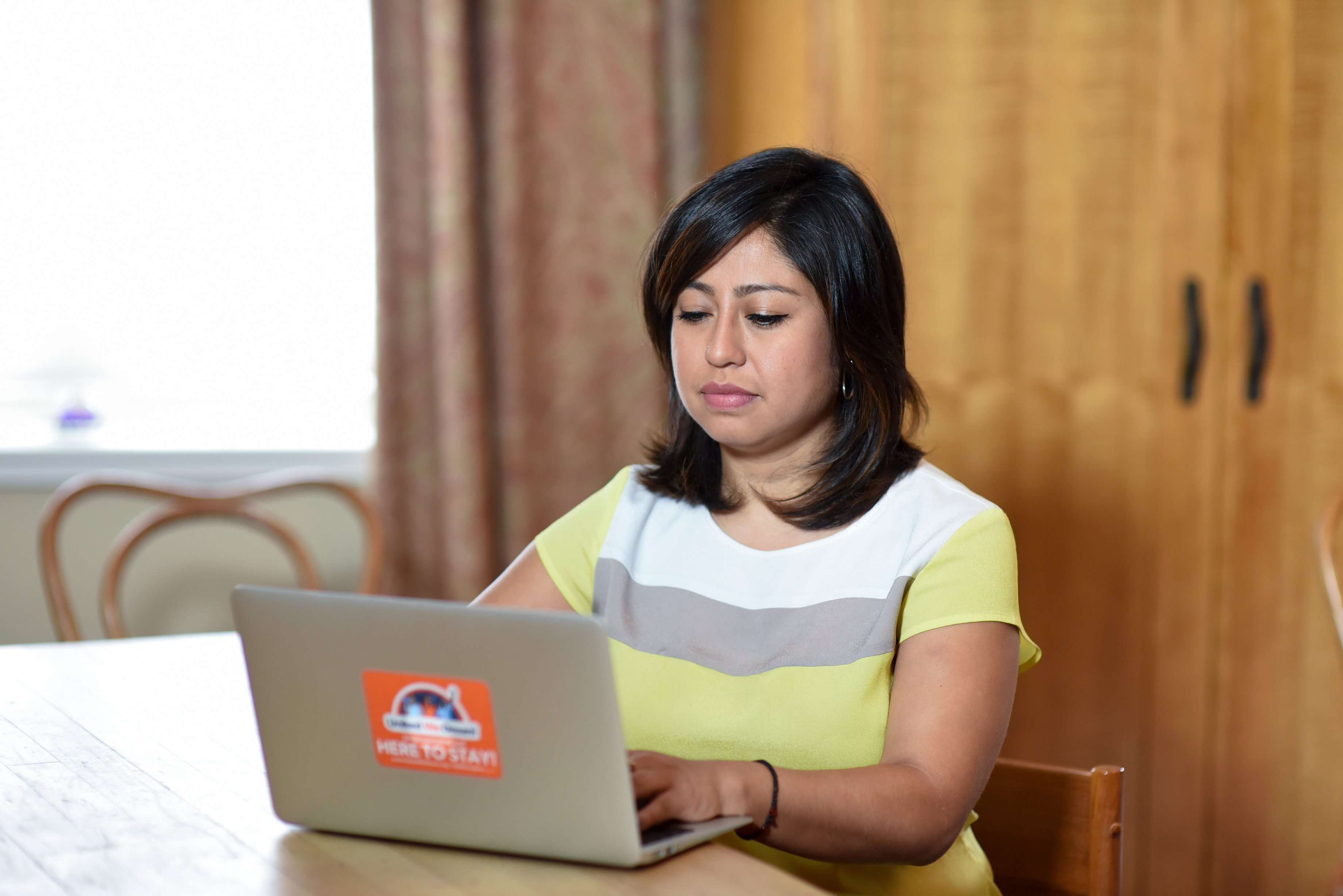 Tell me a little bit about your own personal narrative.

Like many families and immigrants for centuries, my parents risked everything and were courageous enough to leave everything behind and come to the US to seek a better life for their children — for my brother Jonathan and I.

Like millions of [others], my parents fled poverty in Ecuador to ensure that our family was going to have food and shelter and that their kids could have the opportunity to go to school. Particularly I think for my father, who grew up homeless, it was very important that he could provide a different life for his kids.

I was 13 years old when we settled in Queens. Growing up undocumented with my parents, I became really aware of what that meant for us — from being worried about what address you were going to put in the school records to register for school, to how do you open a bank account.

When I was a [high school] junior and I was trying to apply to college my college advisor told me that I was undocumented and couldn’t go to college and that really broke my heart. It was my parents’ sacrifice, it was the dream that they had for us, and that deep sense of injustice […] was what motivated me to start organizing at that age.

How did United We Dream come about? How has it changed over the years?

I started first organizing undocumented young people in New York City — myself with other immigrant young people that were part of the City University of New York, including my own partner Walter. We were undocumented and we were organizing others in the different colleges of SUNY through that work and the work that I was doing with other community-based organizations in New York like the Latin American Integration Center, which became then Make the Road New York.

I got to meet other young people who were also undocumented outside of New York. We started the New York State Youth Leadership Council, which was the first undocumented youth group in New York. Through that work, Walter and I and others met other young people from other states that had similar stories and were doing similar work in their own cities and states. So there were young people from Florida, from Texas, from California, from Colorado, from Massachusetts. 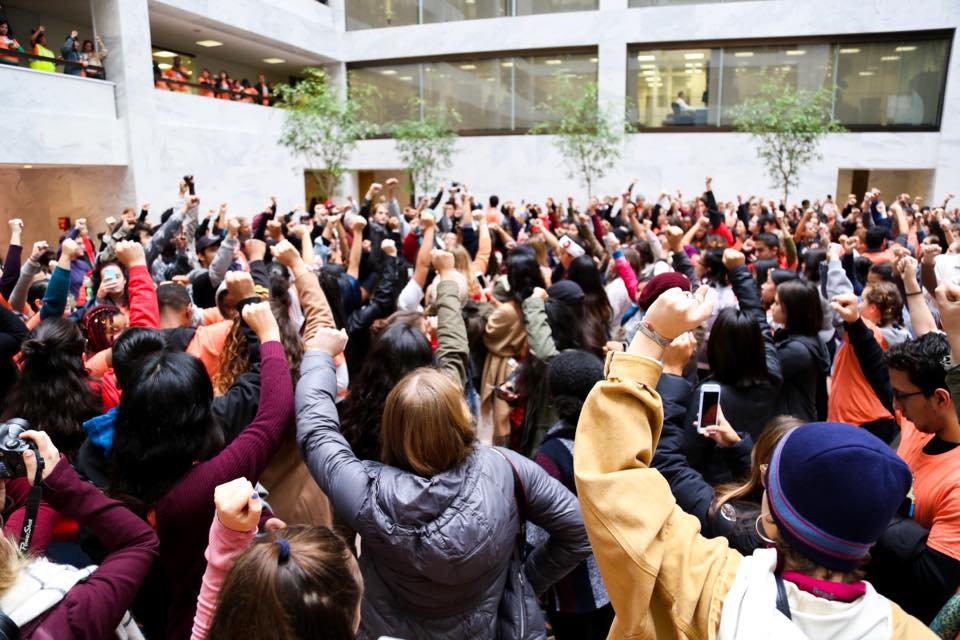 We developed relationships over time, sharing our stories, and it is through that network of young people that we developed that we started advocating for the Dream Act and sharing our stories as undocumented. The slogan of our movement, “Undocumented and Unafraid,” became so critical throughout those years as many of us were overcoming the fear to share our stories and to advocate for our lives and for change in our communities.

After many years of advocating for the Dream Act and failing, we decided to create United We Dream in 2008. Our vision was to create a space, an organization for young people, who like us, were undocumented. We, as people directly impacted, needed to lead a strategy to create change in our lives and to develop a sustainable movement of young people that will help us empower others and work with each other.

What’s the sense today amongst undocumented immigrants, how are people feeling? Are people worried that the Dream Act is not going to pass?

Our community [knew] that it was going to be critical who was going to end up being president, especially because of the commitment that candidates made around mass deportations, terminating the programs like DACA, and banning refugees and Muslim immigrants from coming into the country. We knew that a lot was at stake and when the results of the election were clear, for us it was also clear that the lives of our communities were on the line and that we were all at risk of deportation.

Our community has been living in an increased amount of fear and anxiety and terror since the election results, and as the year has unfolded and we have seen the cruelty and the mass deportation agenda that this administration has led, that has only increased the level of anxiety and fear in our communities. 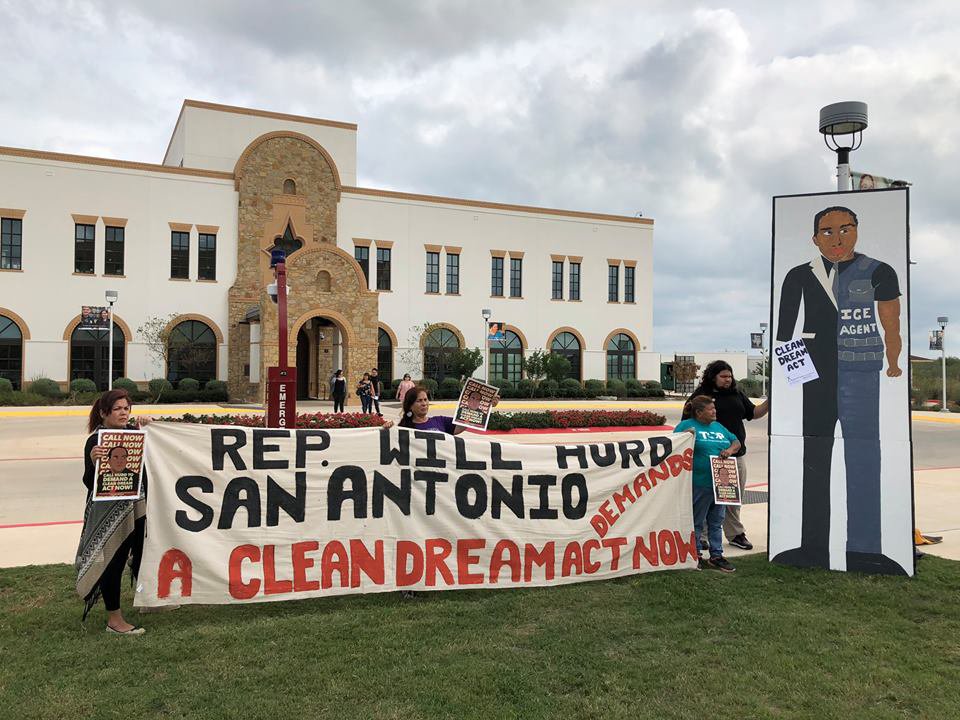 As much as there is fear, which is real, there’s also a lot of courage and resilience of these communities that in the midst of probably the most aggressive deportation enforcement era that we are experiencing in the last 10 years. People are still living here in this country, claiming this as their home, and joining advocacy and mobilization efforts, and mobilization efforts to push back against these policies.

An average of 100 young people have been [advocating] in DC since the termination of DACA, pushing congress to push for the Dream Act and for a Dream Act that doesn’t include hurtful policies for our communities, which is why we have been very clear that our community needs a “clean” Dream Act. And they have been in the halls of Congress, in their districts, making calls and taking actions to push for the dream act.

How can people who are not undocumented be allies right now to undocumented immigrants and kids who grew up here and know only the United States?

It’s no longer a moment to stay on the sidelines and be silent. It’s a moment to take a stand. 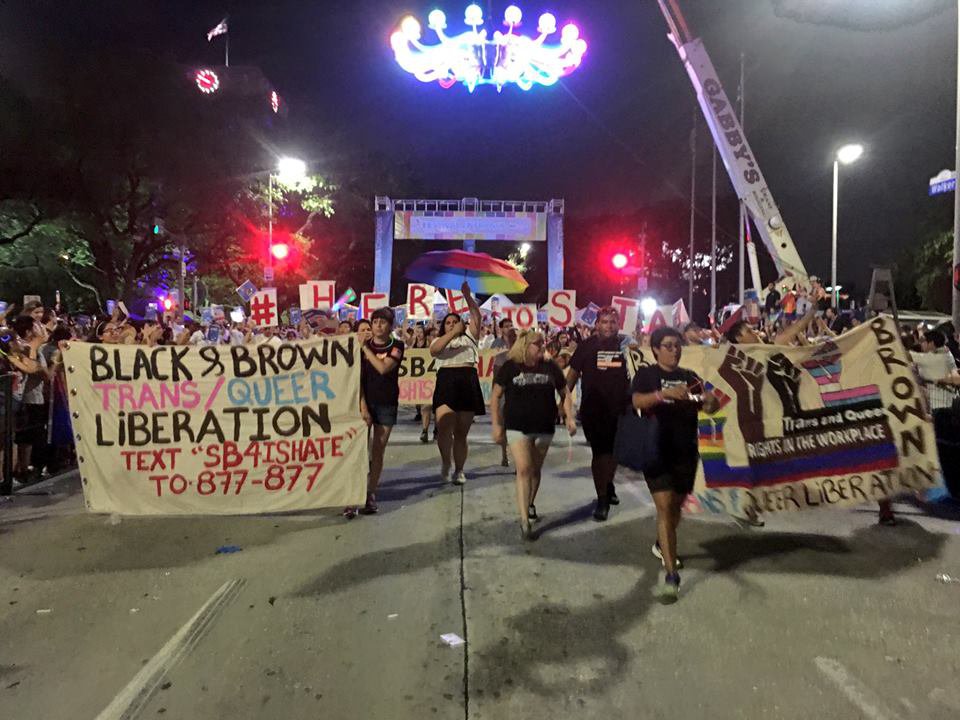 In a practical way, ways in which allies have already engaged with us is that they have joined us in this network. They have joined our rallies, our protests, our mobilizations, our days of action.

Right now, that is the way that allies can support us. We just have less than six weeks to make a clean Dream Act a reality for our communities and the way in which allies can join in this moment is by calling their members of Congress and joining us in actions and days of mobilization across the country.

Are you hopeful? What sort of reaction have you gotten in congress? Have they been responsive to your message and to your mobilizations?

We have seen the impact of our work. Paul Ryan came out about a week or so ago saying they will include the Dream Act in the omnibus bill in December to make sure that it passes. You’ve seen democratic leadership — [Chuck] Schumer and [Nancy] Pelosi — saying that they’re committed to getting this done by December and with them many, many Democrats have joined them in that call. You have had other Republicans that have supported Ryan on this, so we’re seeing how both parties have engaged in a way that they have been clear that they want to get this done.

We cannot say that it will happen until it happens. We believe that it is really critical to ensure that everybody in our communities and all of our allies and faith leaders and educators and CEOs who have already mobilized around this work together put pressure on members of Congress and get it done.

I strongly believe that if all of us get engaged, that we will get this done.

This interview has been lightly edited and condensed for clarity.