This month, the UNESCO Institute for Statistics in partnership with the Global Education Monitoring Report described the global state of education in a new paper.

It revealed that there are 263 million children between the ages of 6 and 17 currently out of school worldwide. This number has risen and disparities relating to gender, wealth and location remain consistent.

One reason for the declining situation is that, through The 2015 Sustainable Development Goals (SDG’s), data is being collected more accurately. As a result, the new education figures more clearly reflect the reality.

As the UN reported, “Ensuring that all girls and boys complete free, equitable and quality primary secondary education and vocational training for the vulnerable, including persons with disabilities, indigenous peoples and children in vulnerable situations.”

Here’s the breakdown of the report:

Numbers were steadily falling between 2000 and 2007 but progress has slowed down since then.

Here’s what it looks like as a global picture: 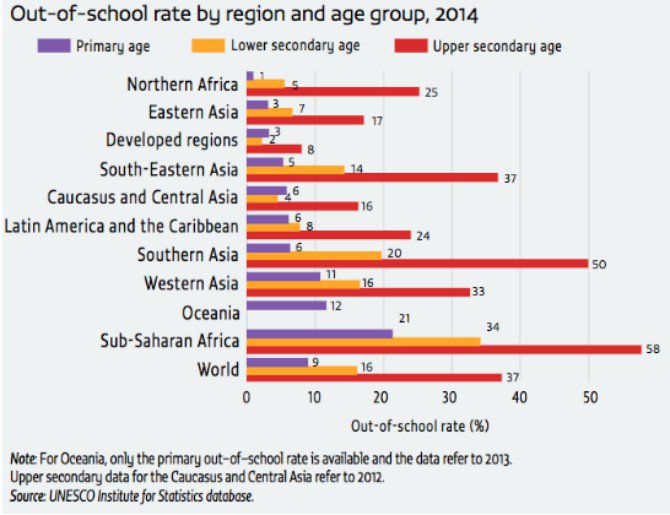 In Southern Asia and sub-Saharan Africaaround half of all youth are not in school.

Southern Asia and sub-Saharan Africa also have the highest exclusion rate, with 21% denied from attending schools. Oceania is third worst with 12% and Western Asia is at 11%.

In Southern Asia, 15-17 year olds are up to eight times more likely to be out of school than children in elementary school. This is due to several social and institutional factors. Around the world, education is not necessarily compulsory for the full 12 years of schooling. So many children cut short their education once they complete the compulsory primary and lower secondary school years.

Around this age, many children can begin to legally work. The right to an education then clashes with the right to work and children living in extreme poverty are forced to make tough choices to support their livelihoods. Another factor that compounds the low numbers of adolescents in upper secondary school is the delayed effect of all of the children who weren’t able to go to primary school in 2005.

One of the main reasons behind the drastic increase of children out of school is the number of crises and conflicts that have developed over the past few years. In 32 conflict countries, there are 32.5 million primary school children, 15 million lower secondary education and 26 million upper secondary who account for 35%, 25% and 18% of all out of school children worldwide. This is why funds like the Education Cannot Wait Fundare in desperate need of funding to minimise the consequences.

Read more: Why School Cannot Stop When an Earthquake Hits

As always, more girls than boys will never go to school. According to the Malala Fund, girls account for 31 million primary-aged children and 32 million are missing out on the first three years of secondary education.

There are a multitude of disparities in school attendance and they increase from primary to secondary education. For example, overage enrolment, where a pupil of lower secondary age is enrolled in primary school, is a common phenomenon. With a year nearly passed since the 2030 Sustainable Development Goals were set and the new statistics provided by UNESCO, it is evident that focusing on inclusion will lead to the achievement of SDG 4 on quality education.

Facing the reality of these statistics, we know we are not close, but not too far either. The focus now needs to be on wealth, location, and gender parity, which will cost an estimated 39 billion USD per year. Accompanying the funding to provide education for youth, girls, and refugees, are several policies that will need to be implemented to increase school supplies, improve infrastructure and classroom construction, reducing rees and creating scholarship opportunities.

The four main policies that would help contribute, according to UNESCO, would be:

2.     Raising the minimum age for admission to employment and becoming stricter in terms of surveying child labor. 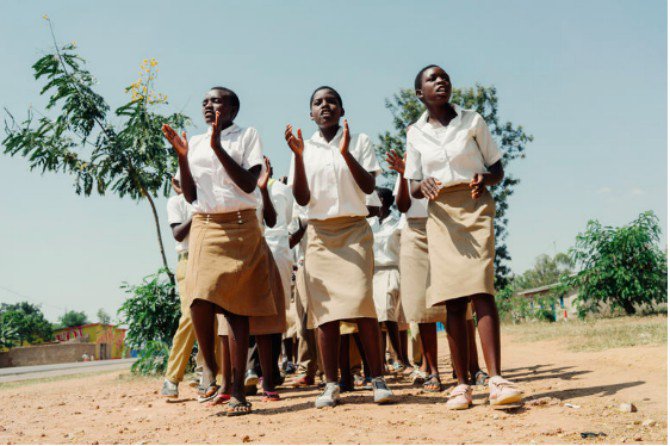 Image: Photo by Thomas Prior for MSNBC

Now is the time to take action and remind world leaders to push for these policies and funding. You can do so by asking the Education Commission to focus on girls’ education, the voice of the youth in decision making, and education for those affected by emergencies.