The women raped in the Rwanda genocide finally get to share their stories. 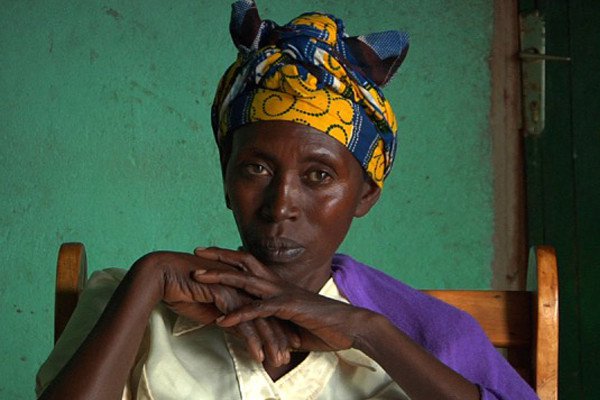 In 1997, Jean-Paul Akayesu, the mayor of Rwanda, was the first person to be convicted of genocide and of committing rape as a war crime. But until Michele Mitchell, writer and co-director of “The Uncondemned,” came along, the story had been largely untold.

It’s written as a narrative thriller that tells the stories of the courageous Rwandan women who shared their stories on camera for the first time since the trial in 1997, where they testified behind a curtain. The trailer, above, gives a chilling look at the scope of these war crimes, and the significance of Akayesu’s trial.

“I’m going to take the sex out of sex crimes and I’m going to put this so firmly where it belongs,” Mitchell told Global Citizen. “It’s an act of power, torture, humiliation and no one running for office will ever get away with saying that again,” she explained feeling as she started the project.

Mitchell, 46, was born in California and began her journalism career during her time at Northwestern University as a sports reporter for the Chicago Tribune.

After graduation, Mitchell moved to DC, worked on Capitol Hill and published her first novel. She moved to CNN Headline News, publishing a second novel along the way. She finally landed at PBS, where she gained valuable experience in documenting experiences on film. She created a web series about Haiti, which would later be reconstructed into a documentary and aired on PBS. It won several awards.

In January 2013, now an acclaimed filmmaker, Mitchell was inspired to dig around for stories about sex crimes after hearing an insensitive comment from a politician on the radio that left her enraged.

And after months of research and writing, that’s exactly what she did.

Mitchell had recently finished her first documentary, titled “Haiti: Where Did the Money Go” with her late creative partner Nick Louvel. After uncovering the story about Akayesu, she convinced him to get onboard in 2013 and dove right into research.

“I cashed in my frequent flyer miles and went to Rwanda,” she said. She scouted the Congo and Rwanda in August 2013

“I wasn’t there to take notes. Really [I was there to] just listen and start to get a grasp on how to approach this story,” Mitchell said.

And the story was brutal and complicated. Akayesu was the mayor of the Rwandan city of Taba during the mass genocide of Tutsis by the rival tribe Hutus. Akayesu wasn’t accused or tried for physically killing or raping anyone himself but for ordering them. Many Tutsis were murdered and raped in Taba under his watch. He was found guilty in the International Criminal Tribunal for Rwanda for nine counts of genocide and crimes against humanity.

“The Uncondemned” tells the story of young international lawyers, activists, and brave Rwandan women who fought together to prosecute rape as a war crime, and change the world of criminal justice.

Mitchell returned to Rwanda in November 2013 to begin principle photography, and conduct interviews with the FDLR militia, and the women who testified.

After speaking with the women in Rwanda, the urgency to help them share their stories became consuming. Mitchell said she approached the gathering of information with a profound kind of sensitivity.

“I knew, for example, that I didn’t want to ask them what happened to them, which is unusual right? Because usually that’s what we want to do. I wanted to know, ‘Why did you decide to testify?’” she said.

“You could tell how much it meant to them that I was even there. That we were even filming them. That the story would get out. That they were being treated as heroines,” she said. “I think about those faces everyday.”

However, structuring the narrative was no easy task given that the timeline had so many moving parts. It took Mitchell a solid four months of just writing until she found a way to sequence the interviews and artifacts to tell a compelling story.

“You have to hit them in the heart. We all know rape is bad. We all know war is bad. But statistics don’t mean anything if you don’t really get what happened,” Mitchell said.

Initially, Mitchell had a wealthy donor who was willing to invest in the project, but over a lunch he questioned the way Mitchell would market the film.

Mitchell, caught off guard, as she describes in her TedTalk, decided to explore targeted crowdfunding and see if there was an audience.

The donations flooded in, and not only were funds gained to create the project, but a community emerged of invested citizens.

When her co-director, Nick Louvel, died tragically in a car accident last year, that same community helped Mitchell finish the film and share the story.

Like she was lifting up the Rwandan rape victims to help tell their story, her community helped raise the necessary funds to help her share their story.

“I remember thinking, pick yourself up, get it done, people are going to help you,” she said.

“It was the hardest thing I’ve ever done. Holding everything together and finishing this thing.”

The public will finally get to see how the heart-wrenching tale unfolds when it premieres in New York City in October. A red carpet event and world premiere will be held at the United Nations on Oct. 19, and the women who testified and shared their stories in the film are expected to attend. The film will be playing at the Landmark Sunshine theater in Manhattan for a week beginning Oct. 21.

“In 1997, humanity got it right. And it was by people who came together, who didn’t really intend to come together. But they did their job,” Mitchell said.

What she didn’t perhaps see was that in telling this story, she too has become a heroine.

Mitchell reflects an understanding of her privilege and desire to contribute back to the world on behalf of that.

The community of dedicated, concerned individuals she has accumulated along the way are the true celebration of the film. Mitchell and her heroines have brought light to darkness.