The first debate of its kind. 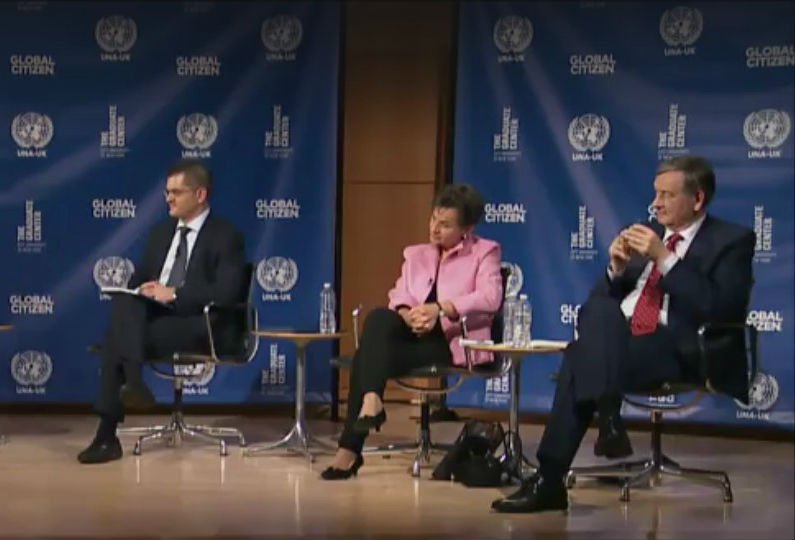 For the first time in history, the election of the UN’s secretary-general — the body’s highest-ranking official — is being conducted openly and the 11 candidates vying for the position are being thoroughly vetted by the public.

The new model allows the public to have a greater say in the election of a hugely influential figure and it helps the incoming secretary-general know what the global public wants for the future.

Global citizens, in particular, have taken advantage of this opportunity. They have submitted thousands of questions for the candidates who are responding to many of them during a series of debates leading up the election.

The latest debate happened Wednesday evening at the CUNY Graduate Center in New York City and featured Christiana Figueres, Vuk Jeremic, and Danilo Turk. You can learn more about them here.

Here are some key takeaways:

Natalie Samarasinghe, executive director of UNA-UK, introduced the candidates and said that this year’s election was taking place in a “post-truth environment, when experts are derided … and opinions are decided by self-selected media.”

She cited climate change, Arab uprisings, and populist uprisings throughout Europe as signs that the world is fragmenting.

“There is a deficit in global leadership at a time when it is needed more than ever,” she said. The candidates on the stage were there to prove that the UN could be a “stronghold against isolationism.”

But, overall, it was a careful event without much flare, reflecting the delicate nature of international diplomacy. Throughout the evening the candidates shared ideas and opinions that were comfortably within the global mainstream.

The one cheer of the night came when Figueres compared human society to a body walking with one leg, when, if women had equal rights, it could be walking with two legs. Right afterward, however, she said that there aren’t enough qualified women in the world to be leaders in the UN.

Jeremic had the most controversial stances. He kept saying that either whole departments of the UN need to be overhauled or the UN should just not exist.

The conversation was guided by the sharp commentary of the moderators and questions drawn from global citizens around the world. When asked what the most pressing concern in the world is, global citizens resoundingly said climate change.

Thank you all for a good dialogue @UNAUK@GlblCtzn@1for7billion@GC_CUNY#CF4SG#NextSGpic.twitter.com/CsYWRNtpn9

The candidates were asked what concrete steps could be taken to immediately address climate change.

Figueres was the climate expert at the debate, having spearheaded the historic Paris Climate Agreement.

She was optimistic, saying that national and global interests are finally aligned when it comes to climate change and that countries finally recognize the importance of acting. Climate change now encompasses food security, water security, energy security, economic security and more, so there is no escaping its urgency.

On Facebook, John Christopher Gay wrote, "To fight global warming, an existential threat, you need a strong UN, which depends on strong governments. Sadly for environmental regulations, most governments are getting weaker because of a failure to create equality, poor treatment of their subjects."

Turk said that cities need to be at the center of any discussion on climate change. Cities contain the bulk of humanity and consume the majority of the world’s energy. In the years ahead, cities will only become more important.

Jeremic agreed that the time for climate action has arrived because people are aware of the consequences of not acting. Previously, as the president of the UN General Assembly, Jeremic saw that there was little coordination within governments (let alone across governments) about how to respond to climate change and that many people were totally oblivious to its threat.

Now, he said, there is better alignment.

A global citizen asked the candidates how they would protect LGBT and women’s rights around the world.

All the candidates agreed that human rights are essential, but there were few specifics on how they would go about advocating for them.

“Humanity has been on a journey of increasing awareness, understanding and respect for human rights,” Figueres said. “As we move through this journey, the responsibility here, of the SG, is to uphold the declaration to do that in a very sensitive way that both respects cultural practices — religious beliefs that are also human rights — and also finds ways to have conversations… [about] individual human rights.”

Later, she added, “I shall be impartial but I will not be indifferent ... because what motivates me, truly, is the fate of the most marginalized and vulnerable.”

.@CFigueres says #UNSG is the voice of the most vulnerable and marginalized. #She4SG#NextSGpic.twitter.com/Su0IoQFEQZ

“Without equality you cannot talk about human rights,” Turk said. “The SG has to be seen as a human rights activist for equality.”

Jeremic then said that he would push for 50-50 gender parity in the UN.

As far as the current refugee crisis goes, he said, “All humanitarian relief needs to be overhauled. There is no time for us to get into detail.”

Many watching were displeased with the lack of specificity. Mark G. Manning wrote on Facebook, " Do something about the situation in Gambia. The government is taxing the people and do nothing for them. The rice that is given them is sold for twice what it is worth. The medicine that is given them is sold at prices to high for them to afford. The land is deforestation so it doesn't rain in the eastern part of the continent. No jobs no food and no medicine. Many children are orphaned and neighbors can't take care of themselves [much] less the orphan children. Don't sit on your hands and do nothing. Stand up and be the Samaritan."

With carnage occurring in Syria, Yemen, Iraq, and elsewhere, the conversation turned to world security. The UN has totally failed in its duty to prevent human suffering, according to a question by one global citizen.

In the past, the UN has been traditionally focused on intervention. The three candidates agreed that, going forward, prevention tactics need improvement. Turk went so far as to suggest that Western patterns of intervention should be abandoned altogether.

Figueres argued that “we have to increase our sensitivity to pick up the indicators” of when human rights are being violated so the violations can be halted before they escalate.

“The UN is currently being left way behind when it comes to addressing the real security challenges of today,” Jeremic said. “We need to do a radical overhaul of the peace and security dimension of the UN.”

Parts of the UN have been plagued by scandal in recent years. Sexual violence by peacekeepers, widespread charges of corruptions and accusations of weakness in the face of enormous problems have all wounded the UN’s reputation.

Thomas Weiss, the moderator, said the the UN seemed to throw its moral compass out the window when it removed Saudi Arabia from a list of countries that oppress women.

It has also become known as the world’s most immovable bureaucracy.

With all this in mind, how will the next SG repair the UN’s image?

Turk argued that the UN has to be remedied and that “the principal of learning from mistakes has to be firmly established.”

He said that the UN has achieved a lot in the past and this can guide the future.

Jeremic, meanwhile, said that “peaceful and slow tinkering is not going to be enough,” and resumed his talk of overhaul.

When asked about how whistleblowers can be better protected, nobody offered any concrete proposals or referred to any actual whistleblowers.

Figueres, however, suggested that if a whistleblower reveals actual wrongdoing then he or she has to be protected — but only after a long investigation.

Why would anyone want to drink from the “poisoned chalice” that is the UN? Weiss asked the candidates.

To Figueres, the best of the UN is “proving again and again that multilateralism does work … when we are able to stand up to highest expectations of humanity, fully understanding that there are no perfect solutions for anything.”

For Jeremic, the UN is rapidly becoming obsolete and “the best of the UN is not good enough.”

Without changes to #UN peacekeeping for 21st century, we might as well set up a "blue helmet museum". -@jeremic_vuk

Turk struck a hopeful note. He invoked Nelson Mandela’s gratitude for the UN’s commitment to ending apartheid to remind the audience that the UN has achieved a lot in the past.

“The UN is doing some very important things, some of which is not immediately recognized.”