Will the next step be marriage equality in Australia? 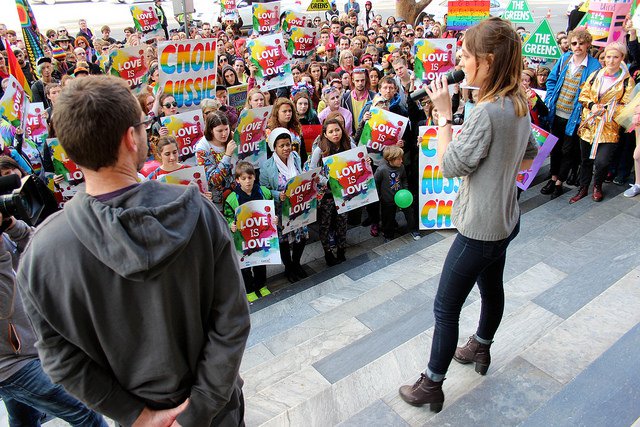 An Australian transgender woman has fought for her right to change her gender on her birth certificate and won.

Current Australian laws requires married transgender people to get a divorce before they can change their sex on their birth certificate. Grace was born as a male and legally married a woman. After transitioning to become a women, Grace tried multiple times over a few years to change her birth certificate but New South Wales authorities refused to allow the change claiming that she would need to get a divorce from her wife first, otherwise it would be condoning same sex marriage.

In Australia marriage is only legal between a man and a women, although it’s estimated that two-thirds of all Australians support marriage equality.

The United Nations Human Rights Committee have ruled in favour of Grace labeling these laws as a violation of international human rights law.

Read more: 15 Incredible Photos of Pride Celebrations Around the World

Grace has been outspoken about the decision saying that this ruling should provoke Australia into legalising same sex marriage.

"The obvious answer is to remove the stipulation of 'one man, one woman' from the Marriage Act," Grace told BuzzFeed News.

During the ruling Australia submitted to the UN that these current laws were essential in upholding the Marriage Act, which bans same-sex marriage.

The UN responded by pointing out that they failed to see how changing one’s sex on their passport does not interfere with the marriage act, while changing it on one's birth certificate does.

"It’s manifestly unfair and requires a person to collude with bureaucracy to create a falsehood – either that your relationship does not exist, or your identification be at odds with your appearance, identity and life, and therefore also a lie," Grace said.

It can also prove problematic for many transgender people when they are asked to provide more than one form of ID and their identification does not match.

More on the UN decision regarding NSW's requirement for married individuals to divorce prior to change of gender... https://t.co/o6m5FxSrCQ

Read more: How Workplaces in Indian Are Slowly Becoming Transgender-Friendly

The report of this UN ruling has come out in the same week that a tape was leaked with audio of Senior Minister Christopher Pyne saying Australians could expect to see marriage equality “sooner than expected”.

One of Prime Minister Turnbull’s election promises was to hold a nation wide vote on the issue of same-sex marriage in the form of a plebiscite. However in November the senate dismissed this plan and parliament have been quiet on the topic of marriage equality ever since.

According to The Sydney Morning Herald, when questioned regarding Pyne’s comments, Turnbull said that a plebiscite was their plan and nothing would change that.

This UN ruling and international attention could be the tipping point in putting pressure on Australia to take a step towards marriage equality.