Nearly 43 years after George Montague — UK’s self-proclaimed “oldest gay in the village” — was convicted of “gross indecency” with a man, the 93-year old has finally received an apology from the government.

“I opened my mail and I found that letter,” Montague, who lives in Brighton, told the Press Association. “That was the most wonderful thing that ever happened to me in my life. I still can’t believe it.”

Montague spent the majority of his life hiding his sexuality. Before marrying his current partner Somchai Phukkhlai in 2015, he had three children with a wife of 22 years — who he said “always knew” he was gay.

Three years ago, he published “The Oldest Gay In The Village” — a memoir of his experiences as a gay man in an age of oppression.

In 1974, Montague was convicted under the Criminal Law Amendment Act of 1885 which criminalized male homosexuality, even after it was legalized in 1967 in England and Wales.

The amendment saw to the arrests and convictions of around 30,000 gay and bisexual men between 1967 and 2003, reported the Guardian. Many of the arrests were often random and arbitrary.

Following his conviction, Montague was fined $180. He was forced to resign as senior county commissioner of the Boy Scouts, where he worked tirelessly with disabled children.

Since then, he has fervidly campaigned for an apology from the Home Office on behalf of the thousands of men prosecuted under discriminatory laws. Just last November, on his mobility scooter covered with rainbow flags, he helped collect 15,000 signatures for a petition outside 10 Downing Street to guarantee just that. 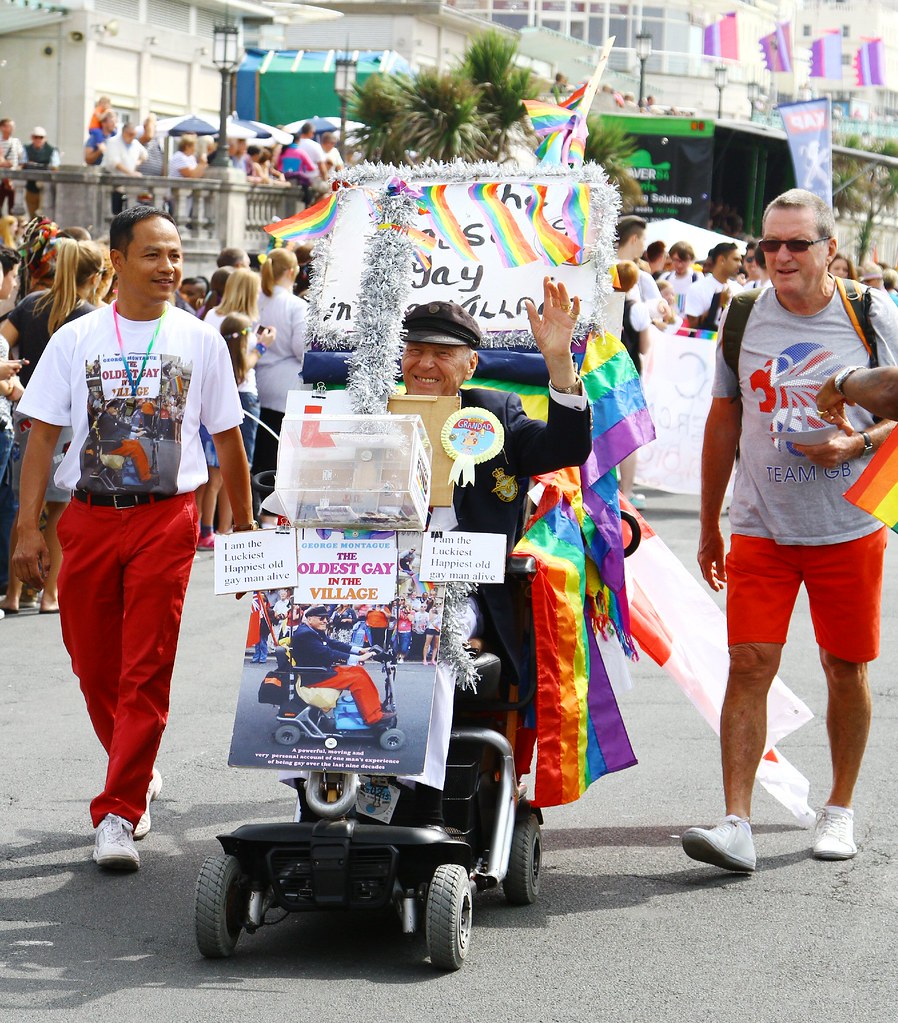 The former Prime Minister Gordon Brown granted Alan Turing an apology in 2009 and in 2013, the queen had given him a royal pardon.

But Montague didn’t want a pardon — he was in it for the apology.

His remarks honor today’s  International Day Against Homophobia and Transphobia and Biphobia, which began in 2004 to draw attention to the violence and discrimination experienced by LGBTQ individuals worldwide.

Today, same-sex acts are still illegal in around 70 countries. And in five countries, as well as in parts of two others, homosexuality is punishable by death.

Just last year, Russia passed a bill banning “gay propaganda” and imposing up to three years in jail for those who offend religious believers.

Around the world, anti-gay sentiments still run high but Montague believes that things are “getting better.”

“Acceptance — that homosexuality is not the way you decide to be,” he added. “It is just the way you are born.”

'Oldest Gay in the Village’ Finally Gets A Government Apology