Wind generated more electricity than coal in 2016. But it’s not all clear skies. 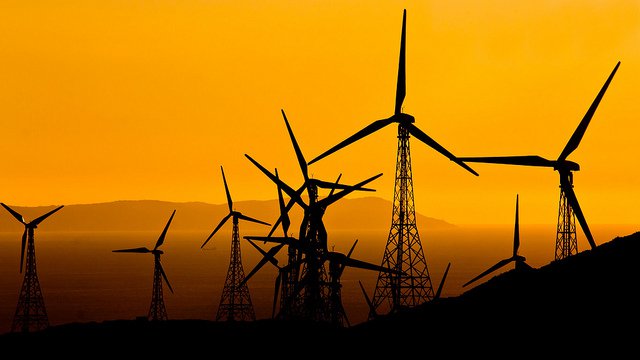 Climate analysts from Carbon Brief celebrated the news as a “milestone” for clean energy production, after a record breaking year for solar, biomass, and other renewable sources.

But, at the same time, it’s been reported that just five days into 2017, London has already exceeded its annual air pollution limit. It’s illegal for hourly levels of nitrogen dioxide to rise above 200 micrograms per cubic metres more than 18 times a year, but last week this was shattered by a road in Lambeth.

Read More: How Toxic Is Your City’s Air? Now You Can Find Out

Air pollution is primarily caused by road traffic, and causes 5,900 early deaths every single year. Funding is due to double to tackle the problem in London, but commentators say that the key problem rests in environmental attitudes at a national level. While air pollution and renewable energy are separate environmental issues, they’re united by the same political apathy.

Total wind production has actually dropped. Wind provided 11.5% of power in 2016, but is down from 12% in 2015. The triumph of wind over coal is less about the growing success of renewables, and more about the declining influence of British coal. The last coal plants are due to be closed completely by 2025.

Renewable energy is no longer the future. It’s the present. Recent reports have suggested that 30 countries have finally reached “grid parity”, where solar and wind power is the same price as traditional fossil fuels. The cost of solar energy has dropped by 80% since 2009, whilst wind energy has seen a 30% drop since 2014. All the while, China has announced investment of over $361 billion in green energy, quintupling solar power capacity.

Britain now gets more electricity from wind than coal. pic.twitter.com/ckNtr7xOcz

David Cameron, former UK Prime Minister, promised to deliver the “greenest government ever” in 2010. Now, some say his clean rhetoric was nothing more than hot air. Seven years later, the majority Conservative government has scrapped the Department for Energy and Climate Change, brought back fracking, and pushed ahead for a controversial expansion at Heathrow airport that is due to make air pollution worse.

The Green Alliance has found that renewable investments of over £1 billion disappeared completely last year. Over the next three years, investment will drop by a staggering 95%. Yet, according to the Paris climate agreement ratified by Boris Johnson at the end of last year, the UK must cut carbon emissions by 90% before 2050. Meanwhile, the high court ruled last year that the state response to air pollution has been illegally poor.

“Renewables will be cheaper than new fossil power stations by 2025 at the latest if we allow companies to build, learn, and cut their costs,” said Dustin Benton, Green Alliance deputy director. “But the government has been holding back… It’s also blocked the cheapest renewables from being built.”

2017, the bad news: Govt's own figures show a 95% fall in renewables investment by 2020. https://t.co/uSV2jPoCbDpic.twitter.com/FePlCuN3Az

Building a stable future with renewable energy is not a breeze. It needs funding to grow, so that grid parity can be a British reality. It’s promising news that wind energy has finally overtaken coal production, but if investment in renewables does indeed drop by 95% in the next 3 years, then progress will fly off a cliff edge. Alongside the pertinent problem of air pollution, national action is an absolute and immediate necessity.