The tactics have been described as shameful. 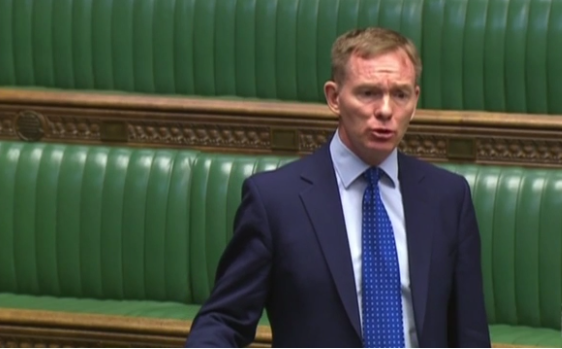 Chris Bryant MP gave a moving defence of the bill.

A UK government minister has delayed a vote to pardon almost 50,000 gay men of crimes that have now been abolished. The Private Members’ Bill, introduced by SNP MP John Nicholson, would automatically pardon men convicted of having consensual homosoexual relationships and who have lived with unjust criminal convictions for decades.

The government announced that it would provide posthumous pardons to men convicted, but that men still living with these outdated convictions could apply individually for a pardon through the Home Office, effectively telling gay men to ask the government for forgiveness.

The original bill had proposed going further and automatically pardoning gay men still living with the shame of crimes that do not exist.

"It's great to forgive all the people who are now dead, but it's kind of sentimental,” said Nicholson on the BBC’s Daily Politics. "I'm more interested in forgiving the people who are still alive, and have lived with this for decades."

Read More: Banned from School, Nearly Forced into Marriage: How a Nepali Girl is Fighting for Gay Pride

The vote on the pardon was expected to take place today, but Justice Minister Sam Gyimah has filibustered the decision by talking out the issue until time ran out. If fewer than 100 MPs show up for a vote on a Private Members’ Bill, a party can prolong the debate until time runs out and prevent a vote from taking place.

Cries of “shame” were heard as Gyimah continued to delay the procedure.

He argued that the government had already delivered its manifesto commitment to provide a pardon by introducing posthumous pardoning, and "allowing gay men to apply to have their convictions disregarded." Gyimah spoke for 25 minutes, until the time allotted for the debate run out.

The bill was known as the “Turing Bill,” named after legendary codebreaker Alan Turing, who played a pivotal role in the Second World War by cracking the "Enigma" code which helped the Allied Forces defeat Germany. He was convicted of “gross indecency” for homosexual activity in 1952, and committed suicide two years later. More than 50 years after his death, he received a posthumous pardon in 2013.

But in an emotional speech, MP Chris Bryant reminded Parliament that Turing was not the only British hero convicted of crimes for his sexuality. Close to tears, he said, “I don’t want to call it the Turing Bill,’ listing the names of other wartime figures who were convicted of homosexuality, before insisting that all the living men should also receive something “that feels like an apology.”

Many have expressed their outrage at the outcome of the debate on Twitter, as tens of thousands of gay men will continue to live in the shadow of crimes they did not commit.

Shame on the Tories for this. Very proud of @MrJohnNicolson for bringing this Bill forward and speaking so movingly on it. #TuringBillhttps://t.co/WnjmyKKlaW

It's a disgrace. I'm so angry. John set out very carefully and thoughtfully why his Bill goes further than govt and can be worked on further https://t.co/YgbAOSOQew

You have misspelt filibustered. #TuringBillhttps://t.co/jpLBvaTFmk