The same people who helped put Trump in the White House. 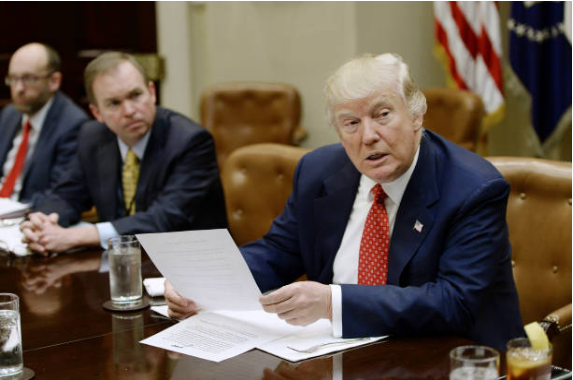 US President Donald Trump released his 2018 budget proposal Tuesday morning, which his administration named, “A New Foundation for American Greatness," and it takes a cue from Trump's "America's First" policy that resonated deeply with rural and white Americans.

But the prosperity that the administration claims the budget will achieve will not be felt by everyone in the US. In fact, working-class Americans, who were a bulwark in Trump’s electoral victory, stand to get hit the hardest.

For the most part, the proposal calls for an increase in military spending, offset by massive cuts to government programs that benefit the poor.

Take Action: Sign the Petition to Stand For US Foreign Aid

Over a 10-year period, Medicaid, the budget calls for the federal health program for low-income Americans, to be cut by $866 billion (assuming the Affordable Care Act is repealed, which the proposal does) while the Children’s Health Insurance Program will be cut by $5.8 billion, Axios reports. More than 74 million people were enrolled in these programs as of March 2017.

SNAP (food stamps), which helps feed 44 million people every year, will be cut by $193 billion; and Temporary Assistance for Needy Families (TANF), which helps more than 1.1 million families (about 2.6 million individuals) throughout the country pay for food, shelter, utilities, and other non-medical expenses, will be cut by $21 billion.

Welfare programs and disability benefits, which millions more rely on, will be cut by $272 billion and $72 billion, respectively.

The plan also calls for reducing agriculture subsidies by $50 billion over the next decade, the largest cuts since Ronald Reagan, according to Politico.

On the education front, the budget would cut $143 billion from federal student loan programs, which help subsidize higher education for people who wouldn’t otherwise be able to afford it.

The White House is assuming a robust 3% economic growth (compared to Congress’ estimate of 1.9%, per Politico) thanks in part to Trump’s tax reform plan, which is still being written.

The Trump administration says it is approaching the budget by thinking of taxpayers first, rather than who will benefit from government programs.

“I think the first time in a long time that an administration has written a budget through the eyes of the people who are actually paying the taxes,” said Mick Mulvaney, White House Office of Management and Budget Director.

But the proposal makes no changes to Social Security’s retirement program or Medicare, the two largest contributors to national debt, the New York Times reports.

Mulvaney repeated the belief that cutting benefits will incentivize people receiving them to pull themselves up by their proverbial bootstraps.

The proposal would mandate a Social Security Card to receive the Earned Income Tax Credit and the Child Tax Credit, barring undocumented immigrants from receiving the benefits, which Mulvaney claims will save $40 billion over 10 years – the tax breaks benefit households making up to $53,000 per year, Politico reports.

The budget calls for a 10% increase in military spending and a 5.8% increase ($4.3 billion) in the Veterans Affairs budget in 2018. It also allocates $2.6 billion for border security, $1.6 billion of which will go toward a wall along the US-Mexico border, and calls for $19 billion over 10 years to go towards six weeks paid maternity and paternity leave for new parents.

The proposal has zero chance of being approved, according to the New York Times, as no Democrat will vote in favor of it and Republican lawmakers are reluctant to make such expansive cuts to programs that benefit their constituencies.

“The politics of this make no sense to me whatsoever, in the sense that the population that brought them to the dance are the populists out there in the Midwest and South who rely on these programs that he’s talking about reducing,” said G. William Hoagland, a former senior Republican congressional budget aid.

“I don’t see how Speaker [of the House Paul] Ryan gets anywhere close to 218 votes in the House of Representatives if this is the model. It’s an exercise in futility,” he said.

Indeed many Republicans who support rolling back government still believe that some programs, like Meals on Wheels, which provides food assistance to older Americans, are too important to axe.

“It’s probably is the most conservative budget that we’ve had under Republican or Democrat[ic] administrations in decades,” said Rep, Mark Meadows (R-NC), the chairman of the House Freedom Caucus. “Meals on Wheels, even for some of us who are considered to be fiscal hawks, may be a bridge too far.”

The fact that Trump is on his first international visit at the time of the budget’s release is a testament to the document’s limited pragmatic value, the New York Times argues. Nevertheless, it provides a starting point for Congress to write its own budget, which will hopefully look to improve government programs rather than scrapping them entirely.

“The argument can be made that there are certainly programs that are not achieving their goals,” Hoagland said. “That doesn’t mean we should take the money away and forget about it.”