British MPs and campaigners are slamming US President Donald Trump after he retweeted anti-Muslim videos shared by a prominent far-right leader in the UK. 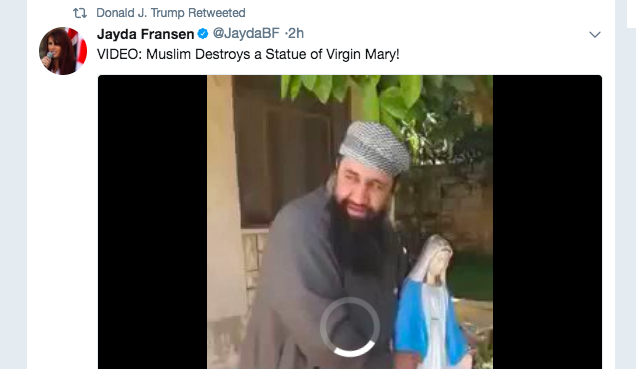 One of the videos claims to show a Muslim man destroying a statue of the Virgin Mary. Another is entitled “Islamist mob pushes teenage boy off roof and beats him to death.” The third claims to show immigrants hitting a Dutch boy on crutches.

The videos were first posted by the acting leader of the far-right group Britain First, Jayda Fransen — who was this month found guilty of religiously aggravated harassment after verbally abusing a woman wearing a hijab. 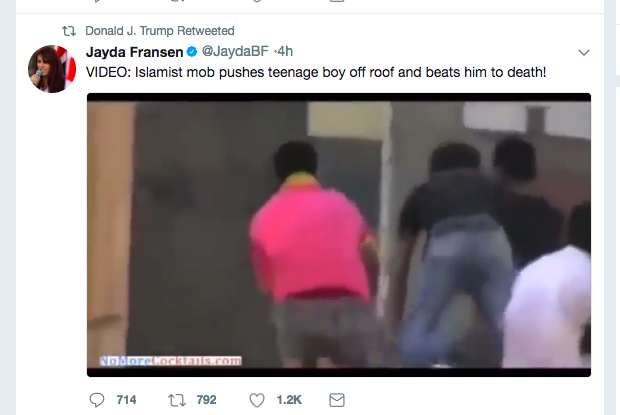 The president didn’t comment on the videos when he shared them. But the Guardian has referenced his comment on retweeting made in 2015: “You know, I retweet, I retweet for a reason.”

Brendan Cox, the husband of murdered British MP Jo Cox, was one of the first to condemn the president’s actions. 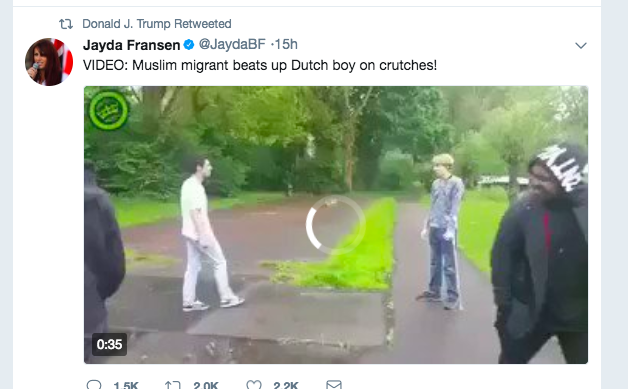 “Trump has legitimised the far right in his own country, now he's trying to do it in ours,” he wrote on Twitter. “Spreading hatred has consequences and the president should be ashamed of himself.”

Jo Cox was murdered in the lead up to the EU referendum in 2016 by Thomas Mair, who shouted “Britain first” before attacking the MP in the town of Birstall.

David Lammy said Trump is "not welcome" in the UK, and then shared Brendan Cox’s tweet, commenting: “Solidarity with you Brendan today and always. I am with you standing up to the fascists in our midst.”

Trump sharing Britain First. Let that sink in. The President of the United States is promoting a fascist, racist, extremist hate group whose leaders have been arrested and convicted. He is no ally or friend of ours. @realDonaldTrump you are not welcome in my country and my city.

Baroness Warsi, member of the House of Lords and former Conservative party chairperson, said politicians across the right-left spectrum were "appalled".

Parliamentarians on the right and left of politics are appalled by @realDonaldTrump and his ongoing relationship with far right bigots.#Trumps unambiguous and unapologetic support for #BritainFirst is not conducive to the public good and a basis for a ban on all future visits https://t.co/dKum5EswDU

And Labour party leader Jeremy Corbyn has also added his voice to the mix.

I hope our Government will condemn far-right retweets by Donald Trump. They are abhorrent, dangerous and a threat to our society.

Britain First describes itself as “patriotic” and “loyalist”, rather than racist, but the group’s anti-immigrant rhetoric has attracted widespread condemnation.

Its Facebook page, which has 1.9 million “likes”, has previously been criticised for posts including one which praised a terrorist mosque attack in Finsbury Park, London.

They have also carried out “Christian patrols” and “invasions” of mosques in the UK — although they have now been banned from entering mosques.

Fransen appeared to be delighted about the president’s re-tweets.

Britain first was formed by anti-abortion campaigner Jim Dowson and Paul Golding — who was elected as a British National Party councillor for Swanley in Kent, in 2009.

After he stepped down, in 2011, he set up the group Britain First, which he again stepped down from citing “family reasons”.

Golding was arrested, along with Jayda Fransen, in May for distributing leaflets in Kent and posting online videos during a court trial — which involved three Muslim men and a teenager who were later convicted of rape and jailed.

The group’s mission statement says it wants “our people to come first, before foreigners, asylum seekers, or migrants, and we are overtly proud of this stance.”

Global Citizen campaigns to achieve the UN’s Global Goals, including for reduced inequalities. We aim to end injustice and discrimination around the world. You can join us by taking action here.