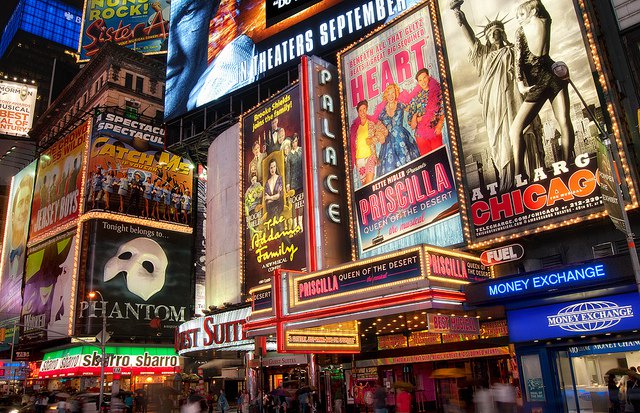 Hamilton walked away with the most accolades at last night’s American Theatre Wing’s Tony Awards show, but the real winner was the theater community in its entirety. On Broadway’s biggest night, its stars assumed supporting roles in a show that focused on diversity, love, and acceptance.

Host James Corden opened the night with a heartfelt tribute to the victims of the shooting at a gay nightclub in Orlando - the deadliest mass shooting in US history - in lieu of the “funny and irreverent” introduction he had planned and practiced for weeks. “Hamilton” decided to abandon the use of muskets durings its award show performance hours before taking the stage, and Steve Martin skipped a planned punchline that alluded to violence.

“Hate will never win. Together we have to make sure of that. Tonight’s show stands as a symbol and a celebration of that principle,” said Corden, directly addressing the camera, behind him a theater full of people wearing silver ribbons to honor the victims. And it was a promise the show certainly delivered on.

What followed was three hours of performances and speeches celebrating diversity in race, gender, abledness, and love. #TonysSoDiverse - the very antithesis of #OscarsSoWhite and so many other award shows that seem to only reinforce social norms and constraints

All four of the awards for best performances in musicals went to black actors and actresses. The revival cast of Spring Awakening performed a medley from the musical featuring hearing and non-hearing actors.

There were no understudies plotting to overthrow the prima donna in the Beacon Theatre last night, just a room full of people supporting one another, taking joy in their work in the face of great tragedy.

Here is every moment of the 70th annual Tony Awards that will restore your faith in the capacity of art and humanity to feel, to care, and to love.

Langella, who was awarded best Leading Actor in a Play for his role in The Father, asked forgiveness for choosing not to thank “a litany of names.” In the wake of the Orlando shooting, Langella was moved by “disgust, anger and tremendous pain” to deliver an inspiring speech on dealing with loss instead.

“When something bad happens we have three choices: we let it define us, we let it destroy us, or we let it strengthen us.”

Hamilton has made waves this season for so many reasons, not the least of which is its predominantly black and latino class that “effectively [wrote] nonwhite people into the story.” When Lin-Manuel Miranda took the stage to accept the award for Best Score for Hamilton, he continued to champion rights for all, choosing to shine the spotlight on love and Orlando in a sonnet rather than giving the traditional thank you speech.

Last year, Deaf West Theatre revived the 2006 musical that made Lea Michele and Jonathan Groff household names, Spring Awakening. Though it didn’t win, the production was nominated for Best Revival of a Musical for its creative incorporation of American Sign Language into the choreography. The harmony of its hearing and deaf cast members is made particularly poignant by the musical’s plot which centers on the breakdown of communication and the events that ensue.

In a recent interview with Esquire, Daveed Diggs explains that his father “doesn’t necessarily identify as gay, but [he’s] known [his] father’s boyfriends [throughout his] life.” He considers the complexity of the concept of masculinity and its often toxic pressures; he adds that his father is his “role model for maleness.”

Diggs thanked both his parents when accepting the award for Featured Actor in a Musical - in particular, his mother for allowing him to do what he wanted, when no one else was doing it, and his father for donning rainbow tights and performing a gymnastics routine with him for his pre-school talent show.

Cynthia Erivo making us reach for those tissues

But most of all
I’m thankful for
Loving who I really am.
I’m beautiful.
Yes, I’m beautiful,
And I’m here.

Cynthia Erivo won best Leading Actress in a Musical for her role in The Color Purple - the musical based on Alice Walker’s novel of the same title, a story of abuse, survival, and ultimately strength - but not before she brought the house down and the audience to their feet in a standing ovation with her performance of “I’m Here” (full song here) in The Color Purple medley.

This year’s Broadway season has been heralded as the most diverse yet - with greater racial representation in casts and shows about everything from Japanese-American internment camps to captive women in Liberia.

The theater community is one that has led the way in inclusivity. Lin-Manuel Miranda noted that “theater doesn’t exist without the LGBT community...it is the cornerstone of our industry.”

So in spite of the incredible tragedy in Orlando, the Tony Awards show exemplified love and grace in a time of sadness, and in honor of the victims that the performers continued to use their art as a vessel for sharing, acceptance, and understanding.

While the needless loss of lives tested our belief in humanity, the Tony Awards show proved that there is strength in community, that compassion still exists. It delicately balanced a celebration of theatrical and artistic achievements with respect and honor for those lost.

It showed us that there is always a way to be compassionate and caring. That the LGBT community will not be forced into silence and fear after a horrific crime. And that love will always triumph over hate. If this can be done on a stage in Manhattan, it can be done on the global stage - the gracious support and love of humanity that emanated from last night’s Tony Awards show should set the stage for the world to follow suit.