Today’s young people don’t want to live on a dying planet when they get older.

In a novel and potentially game-changing set of legal actions, teams of young people around the world are taking governments to court over climate change.

Essentially, they don't want to live on a dying planet when they get older. If successful, the young activists hope to cement robust climate change policies into law. 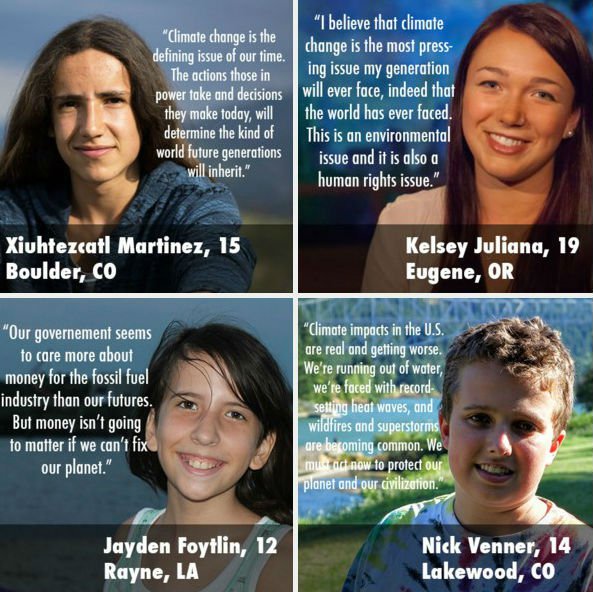 But current forecasts aren’t looking so good. Greenhouse gas emissions continue to rise, temperatures are increasing, the oceans are acidifying, deforestation continues, organisms are going extinct, and nothing urgent is being done about any of it.

Young people view this as deeply unfair and they’re hoping courts will agree with them.

The grounds of the lawsuits are that people have a right to clean air, clean water, stable food supplies and a safe environment--all things that are threatened by climate change.

The UN recognizes these as fundamental human rights, but arguing for future rights at the national level will be challenging. 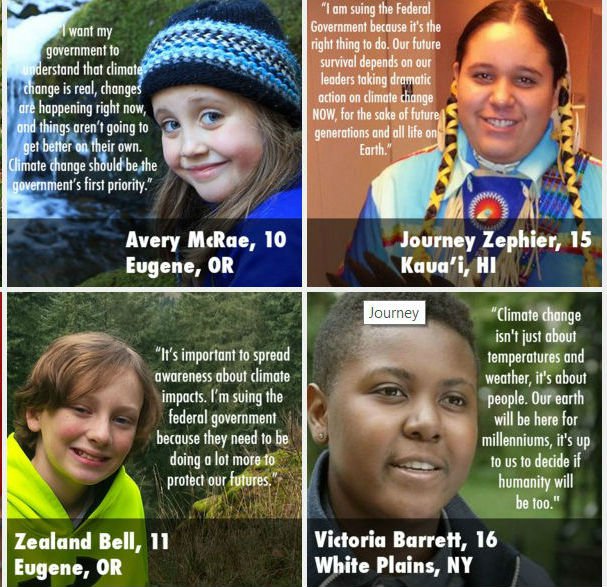 If legal teams are able to persuade courts that the current inaction of governments imperils their future access to these rights, then serious changes to the status quo can be made. Governments may be required to ensure a safe and healthy future, which would force them to radically roll back current (read dirty) energy production and consumption.

One US case that involves 21 young people aged 8-20 is currently before the US District Court in Oregon. The lawsuit is being lodged by the renowned former NASA scientist Dr. James Hansen to give the whole endeavor heft and legitimacy. 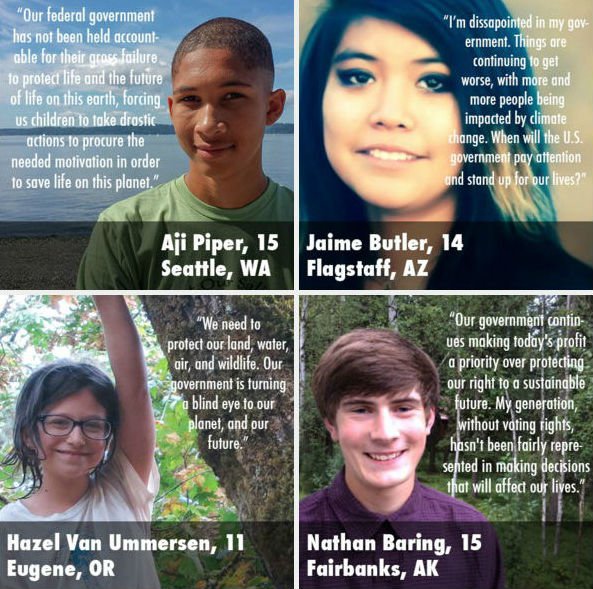 More than 625 oil and gas companies, including Exxon Mobil, BP, Shell and Koch Industries, have joined the government as defendants, filing amicus briefs arguing their businesses would be too negatively affected.

If you thought that these lawsuits were purely symbolic, this corporate backlash suggests otherwise.

“If successful the lawsuit would force the government to implement a national plan to decrease carbon dioxide in the air to 350 parts per million by the end of the century,” according to Charis Chang, writing for news.com.au.

350 is an important number in the environmental community. It is the number of carbon parts per million that is deemed tolerable. Beyond 350, studies then and now say that dire consequences would occur. Currently, the world is well into the 400s, and the viability of the future depends on keeping the number from rising further and bringing it down--a very difficult thing to do.

A victory would dramatically change how the fossil fuel industry operates. And a victory would be a complete reversal of the usual script. (You can read more about this and other cases at Our Children's Trust, the organization behind the legal actions.)

Normally, climate-related lawsuits come from corporations that claim that government regulations are too burdensome and get in the way of their profits.

For instance, the Obama Administration’s cornerstone environmental action is being challenged in the US Supreme Court. If the Environmental Protection Agency’s ruling on power plant emissions gets shot down, then the Obama’s environmental legacy would be crippled and a chain reaction of global environmental backtracking could ensue.

But now, in a smattering of cases, corporations are actually joining with governments to ward off legal challenges.

It’s an irony fit for the era of the 6th mass extinction, when the rights of corporations to profit are too often elevated above the rights of people and other forms of life.

And it would be a fitting outcome if the decades-long fight for climate justice gets validated in an actual court of justice.

Even if these lawsuits are unsuccessful, they show that the emerging generation is filled with climate activists who will stand up and fight for the future of the planet that we all share.

That’s reason to be optimistic.