Through education, youth act to prevent violence against women

This article was republished from UN Women in honor of International Day for the Elimination of Violence against Women (November 25th). Original version can be found here.

After taking part in the third of a series of training-of-trainers workshops, 45 youth leaders from the girl guiding movement prepare to lead prevention activities back home.

Dina Hossam, 21, from Cairo, Egypt, dreams of a world without violence against women. “It’s a world where I don’t have to take my brother with me for my protection when I go out.”

Dina is the youngest participant in the most recent Training of Trainers workshop for UN Women’s Voices against Violence project, in partnership with the World Association of Girl Guides and Girl Scouts (WAGGGS) and with the support of Zonta International. From 18-22 October in New York, the workshop brought together 45 youth leaders from the girl guiding movement in Argentina, Barbados, Bolivia, Brazil, Chile, Costa Rica, Egypt, Grenada, Saint Lucia, Slovenia, Tunisia and the United States of America, to learn how to deliver a unique non-formal education curriculum that aims to prevent violence against women and girls.

Dina believes her age is an advantage: “I’m able to relate to other young people. … My job is to start the conversation… The Voices against Violence curriculum gives me the knowledge and skills I need to talk about this issue with young people.” 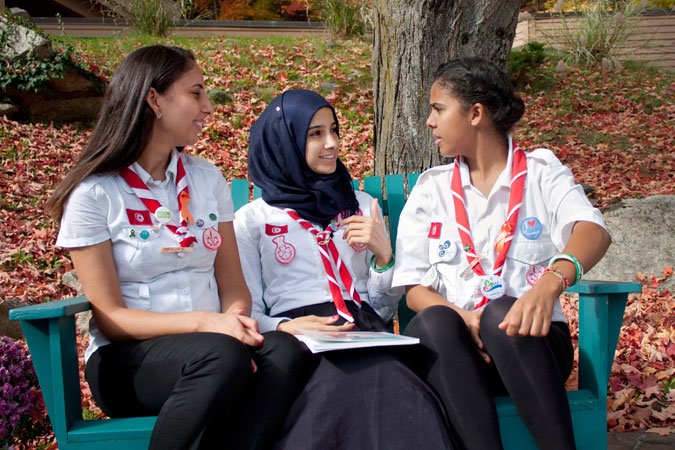 Naouel, Rihab and Hanine, National Trainers from the Tunisian Girl Guides, will be working with UN Women in Tunisia to translate the curriculum into Arabic and to engage young people on the issue.
Image: UN Women/Urjasi Rudra

Impacting one in three women worldwide, violence against women and girls is the most pervasive human rights violation. Gender stereotypes, perceived gender roles and social norms that drive violence are formed early. So comprehensive prevention efforts that engage young people early on are the best way to confront this violence. Education, including non-formal education, is a powerful tool for the prevention of violence, especially when combined with other strategies, such as community mobilization and awareness-raising.

Voices against Violence is a non-formal education curriculum co-developed by UN Women and WAGGGS that fuses education and awareness with community engagement. With content appropriate for young people aged 5-25 years, the curriculum helps them identify the root causes of violence against women and girls, challenge myths and harmful social norms that condone such violence, and promote equal roles and healthy relationships. The first phase of the project, supported by Zonta International, will train 3,000 youth leaders in the girl guiding movement to deliver the curriculum, and engage an estimated 800,000 children and young people in 30 countries. Participants will develop and roll out community-based campaigns and local or national advocacy efforts after completing the curriculum. 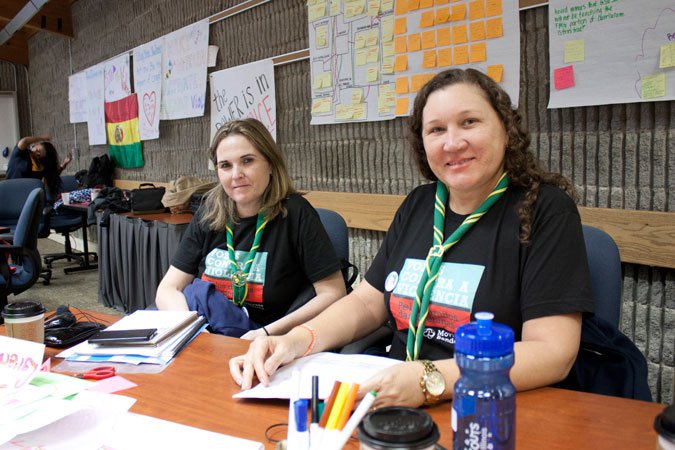 Lenir Rodrigues Santos and Marcia de Avila Bernileao, from Brazil have been girl guides since they were five-years-old and are now National Trainers for the Voices against Violence curriculum.
Image: UN Women/Urjasi Rudra

Among those trained most recently were Lenir Rodrigues Santos, a Brazilian Member of Parliament and public defense lawyer, and Marcia de Avila Bernileao, a human rights lawyer from Brazil—both Girl Guides since the age of five. The Guides in Brazil successfully advocated for a law that now criminalizes discrimination against people living with HIV and AIDS.

“There are good laws in Brazil,” said Lenir, “but implementation is weak. People are not aware of their rights, or the laws that exist to protect them.” Lenir and Marcia want to use the curriculum to educate young people and their communities about how to claim their rights. 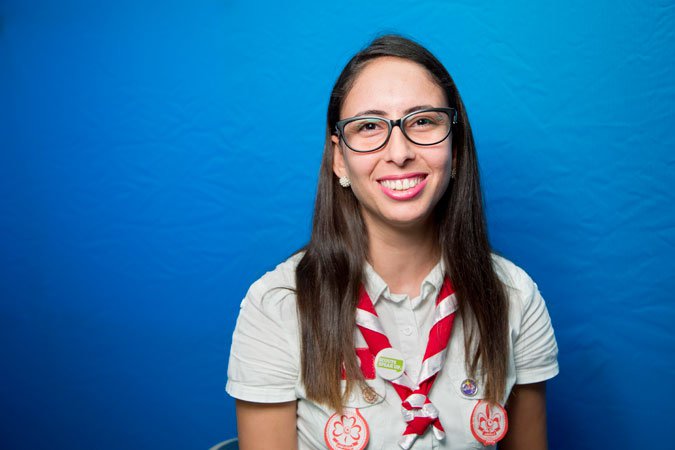 Naouel Ghali is 30 years old, and has been a Girl Guide in Tunisia since she was nine. At the third Voices against Violence training workshop, Naouel learned how to facilitate learning on the sensitive topic of violenve against women and girls.
Image: UN Women/Ryan Brown

For Tunisian Girl Guides, reaching men and boys is key. “Most campaigns and projects in Tunisia target women, but not enough is being done to engage the youth or men,” says 30-year-old Naouel Ghali. They’ll work with UN Women in Tunisia to roll out the Voices against Violence curriculum to engage young people, so that girls don’t grow up believing violence is the norm.

The training workshop in New York was the third in a series of capacity-building workshops. To date, 135 National Trainers and 520 Youth Leaders from 27 countries have been trained to deliver the curriculum. Pre- and post-workshop surveys have shown that 96 per cent of the participants demonstrate improved knowledge, attitudes and awareness. 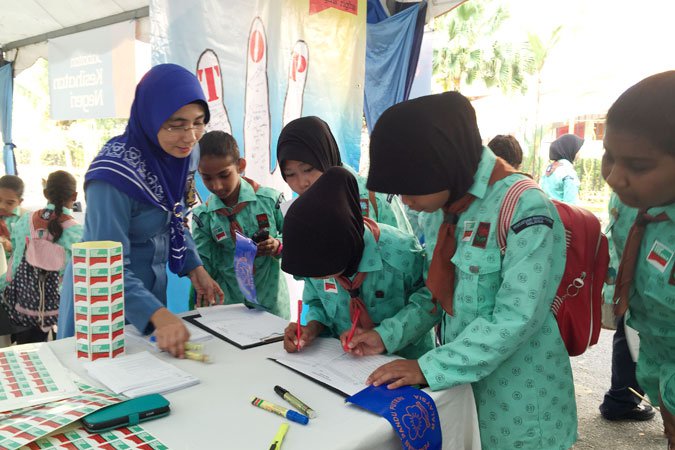 Some participants have already started mobilizing their communities. Azizah Abdul Majid is a National Guild Commissioner, Girl Guide Leader and National Trainer from Malaysia, who attended the first workshop in India, in December 2014. She is also a secondary school teacher in the Kuala Lumpur public school system. She has already led two national workshops and trained 62 Girl Guide Leaders aged 19-35. One of those Leaders, also a secondary school teacher in Kuala Lumpur, said the curriculum gave her hope and could save lives. Two of her students who suffered dating violence had recently committed suicide.

In March 2015, Azizah and her Girl Guide team organized the first of a series of “Stop the Violence Roadshow” events, with almost 2,000 participants. They set up tents and booths at the town centre in Penang, disseminated information and, through activities from the Voices against Violence curriculum, engaged participants in questioning gender roles and stereotypes. They collected 1,040 pledges to “Stop the Violence” and survey responses to understand the prevalence of violence faced by girls and young women in their communities and gauge their knowledge on how to seek help. 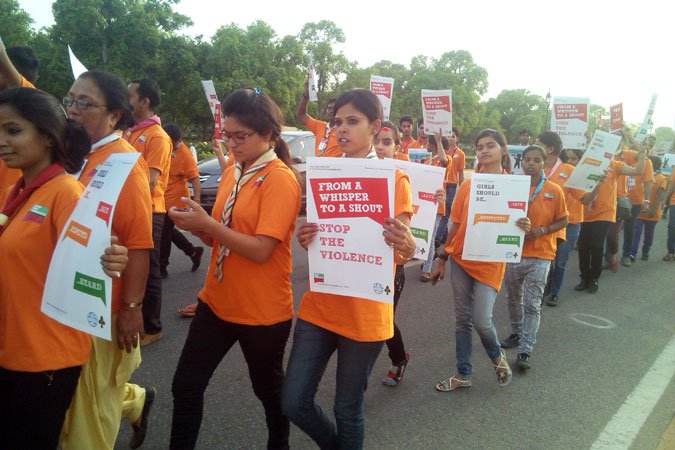 In India, Girl Guides and Boy Scouts learned about violence against women and girls using the Voices against Violence curriculum and organized a “Stop the Violence” march in support of the UNiTE to End Violence against Women Campaign in May, 2015.
Image: Bharat Scouts and Guides

Rasmita Sahoo, 27, a National Trainer with the Bharat Scouts and Guides in India, also attended the first training and has since led a national workshop for 59 trainers in India, which included Boy Scouts and Girl Guides from 21 states. “Voices against Violence has given me a tool with which I can raise my voice and address the root of the problem,” she says. “I am now part of the ‘how’ to change things for a better world.”

To learn more about what you can do this year to help end violence against women worldwide and why these youth are wearing orange check out #16Days and #OrangetheWorld or visit UN Women here.