She’s not in love with you, she’s just doing her job. 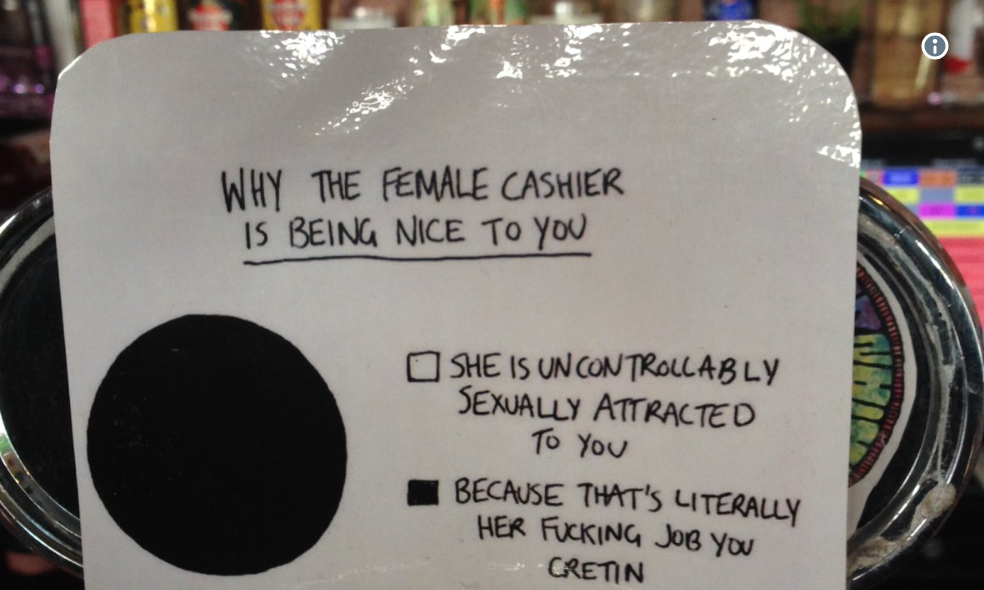 Sexual harassment in the workplace is never OK, but for women working in bars, it can be extra grueling.

So when a female bartender at The Beer Cellar, a craft beer bar in Exeter, England, became fed up with male customers hitting on her while she was trying to do her job, the bar instituted a straightforward new policy.

They put out a sign with a simple quiz on it: “Why the female cashier is being nice to you:”

The first answer — the wrong answer — “She is uncontrollably sexually attracted to you.”

The second choice — the right choice — was that she is simply doing her job.

This is definitely our favourite sign in the bar. Also if dudes could stop trying to kiss our female bartender's hands that would be great. pic.twitter.com/C1Lf8KNe1Q

The bar tweeted a picture of the sign with a message asking male customers to “stop trying to kiss our female bartender's hands.”

The sign was made by illustrator Charlotte Mullin, who told Mashable she understood the problem well from her years working in retail.

"You're obviously pressured to give A+ customer service, and loads of people would interpret common hospitality as romantic interest," she said. "I wanted to make it clear that female staff are nice to you because they have to be!"

Lauren Dew, one of the bartenders at the Beer Cellar, told Mashable the sign came about after a “very sex-pest heavy weekend about three months ago” and the staff wanted a funny way to put an end to it.

"People really laugh, people support it. One percent think it's a bit offensive, which is funny to me because those are the people it's aimed at,” she said.

The reactions to the tweet were almost entirely positive, too.

@JennyFlintoft@BeerCellarExe Every pub should have one

@BeerCellarExe Need this sign in my place of work: the LIBRARY. Not even kidding.