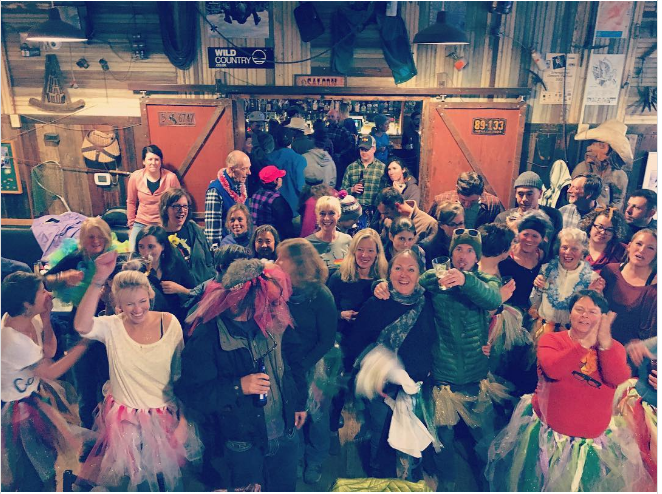 The tutu is a powerful symbol.

The delightfully eccentric, gratuitously frilly, and typically bright-colored ballet skirt, when it appears outside of an auditorium, immediately draws attention and smiles wherever it goes.

And so when it appeared all over the state of Wyoming on Friday, part of a protest against Wyoming Sen. Mike Enzi’s anti-gay comments last week, it made for a joyous protest atmosphere.

Hey @senatorenzi here is a message from four votes in Lander Wyoming, house district 54. We see your blatant disregard for minorities and your loudly expressed privilege and ignorance - we will raise you three tutu's and a "please show up to any town hall meeting, ever." 😘 #Wyoming #liveandlettutu #wyomei #landerwyoming

I love these men 😄😍 #liveandlettutu

Read More: A Million Times Yes to This Queer Formal in Australia for LGBTQI Students

The demonstration formed in response to Enzi’s comments from a speech to middle and high school students in which he said that anyone is welcome in Wyoming, “as long as you don’t push it in somebody’s face.”

He then told the story of a man who wears a tutu out to bars on weekend nights and has found himself in physical fights because of it.

“Well, he kind of asks for it. That’s the way that he winds up with that kind of problem,” Enzi said.

Supporters of LGBT equality wore tutus across Wyoming Friday to protest Sen. Mike Enzi’s comment that men who wear tutus into bars are asking to be assaulted. 🏳️‍🌈#liveandlettutu #matthewshepard #liveandletlive

The comments drew immediate backlash online for the suggestion that someone wearing a tutu deserves to be assaulted. And the story resonated especially deeply in the town of Casper, Wyoming, where a well-known crossdresser, Larry “Sissy” Goodwin, frequently goes out and about in petticoats, another full and frilly skirt, according to LGTBQNation.

Residents of the town and the state donned bright green, yellow, pink, and rainbow tutus Friday for the #LiveAndLetTutu protest, a play on the state‘s motto, “live and let live.”

Goodwin joined the protest, donning both a tutu and a petticoat for the occasion, and a local bar in Casper, Butch’s, offered free drinks to anyone else who arrived wearing tutus as well, according to the report. They advertised the special with the hashtag #WeHaveSissysBack.

Read More: Straight Men Are Holding Hands in LGBT Solidarity in the Netherlands

Enzi offered something of an apology after his remarks went viral on Tuesday, saying he regretted his “poor choice of words,” and apologized “to anyone who has taken offense.”

Enzi’s spokesperson said that the senator personally apologized to Goodwin and clarified that the anecdote wasn’t about him.

Goodwin said the apology was accepted.

“He offered an apology and I have no doubt to believe it was genuine,” Goodwin told the Casper Tribune. “I think we had a respectful dialogue. If anything comes out of this, we both agree that it’s opening a discussion and illuminating the issues to the benefit of everyone concerned.”