By Meghan Werft  and  Pia Gralki

Oprah magazine says it's time to talk about race.

By Meghan Werft  and  Pia Gralki

A new photo series is making people rethink the way the world deals with race in everyday life.

The images, which first appeared in “O, The Oprah Magazine,” reverse racial expectations in simple settings, such as showing a young white girl picking out a toy, faced with row upon row of black dolls. The scenarios are meant to allude to the complexities that, women  experience every day in dealing with race.

The images are not meant to point fingers, but instead are meant to encourage others to challenge their own mindset and racial expectations, and then to talk about it, the series' photographer, Chris Buck, told Global Citizen.

The idea stemmed from a conversation with the creative team at "O" magazine and Oprah Winfrey herself, at Winfrey’s home, according to Lucy Kaylin, the publication’s editor-in-chief.

“The race package grew out of a brainstorming session we had with Oprah at her home. The topic was on all of our minds, and she encouraged us strongly to pursue it,” Kaylin told Global Citizen via email. 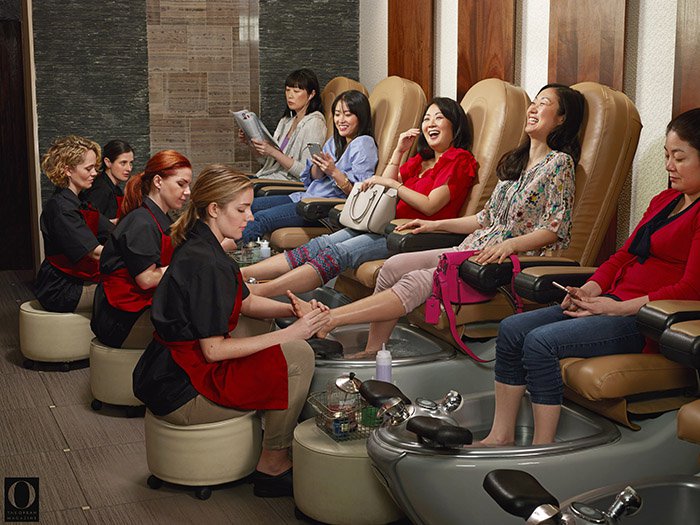 “For the photos, we looked for scenarios that on some level were familiar and ordinary and then turned racial assumptions on their heads —getting readers to look with fresh eyes at the ways race factors into our everyday lives,” she said.

Buck was commissioned by the magazine to capture the “little details” that really make readers of the magazine stop and think about race, diversity, and representation.

“My job was to help bring it to life and to do, obviously, the technical aspects, but also help get the little details to get the message across and to make it feel realistic in the way that it’s meant to,” Buck told Global Citizen.

Read More: Muslim Women Created a Human Chain Outside Westminster and It's Beautiful

“I’m really known most for my odd portraits of public figures and such, but I’ve also done plenty of pictures that are more conceptual for magazines and advertising. Doing pictures that are idea driven and highly conceptual is not a big stretch for me — it’s not unusual,” Buck said. “So in that sense it fits within part of what I do.”

But while Buck’s photos have pushed conceptual limits in the past, there is something new about this series for him.

“The aspect of doing a social or political aspect is different ... I’ve not traditionally done issue driven portraits. That’s definitely different for me,” he said.

Some people feel like there are answers in the photo series, and “that’s fine,” but ultimately, the general aim to get people talking and strike up conversations on the subject, according to Buck.

“The basic idea of the pictures is to upend racial expectations in a context in which you might have people of one race in a social situation,” Buck said.

“Our hope was that the photos and essays in the package would raise readers’ consciousness,” Kaylin said. “Ideally it stays raised: Don’t accept systemic frictions and bias as just being part of life. Be aware, and be part of the solution.”

And beginning the conversation on race is the first step toward eliminating stereotypes that can hold people back from equal opportunities and a future with reduced inequalities. 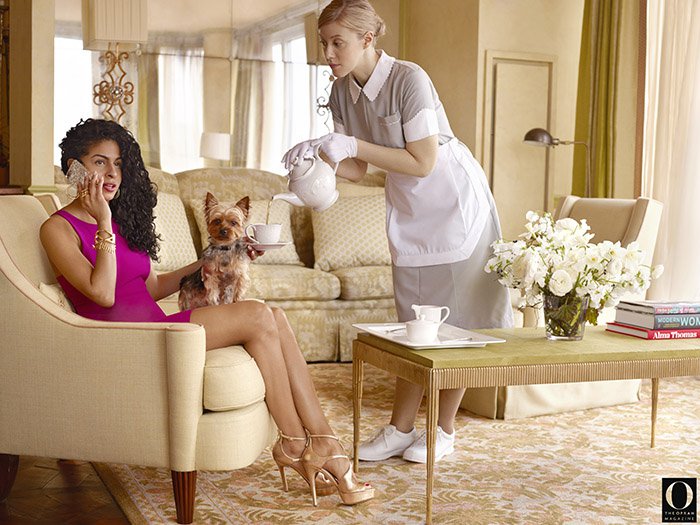 Read More: Nicki Minaj Is Starting a Charity to Pay Off Student Debt

Fortunately, there are media outlets, like Oprah’s magazine, dedicated to furthering discussion on race.

In fact, "O, the Oprah Magazine" just released another powerful photo series, that features eight women who share the first moment they became aware of their race.

This time, however, the stories are stripped down, less fantastical, yet the photos push forward the same message: we all need to talk about race.

And as for a follow up to this series on race, that’s still to be determined. But Buck had some thoughts on making the series better.

He said he was moved by the responses from women who saw the series but would like to make the images more nuanced, more ambiguous to include everyone in the conversation.

“People get what we’re getting at but I wonder if there would have been a better response across the racial spectrum if we had done it in a more nuanced way. That’s why I appreciate the feedback of people who don’t feel welcome to the table of discussion,” he said. “I want all people to feel welcome, and I like the idea that this is an open discussion and everyone feels like they can air their grievances.”