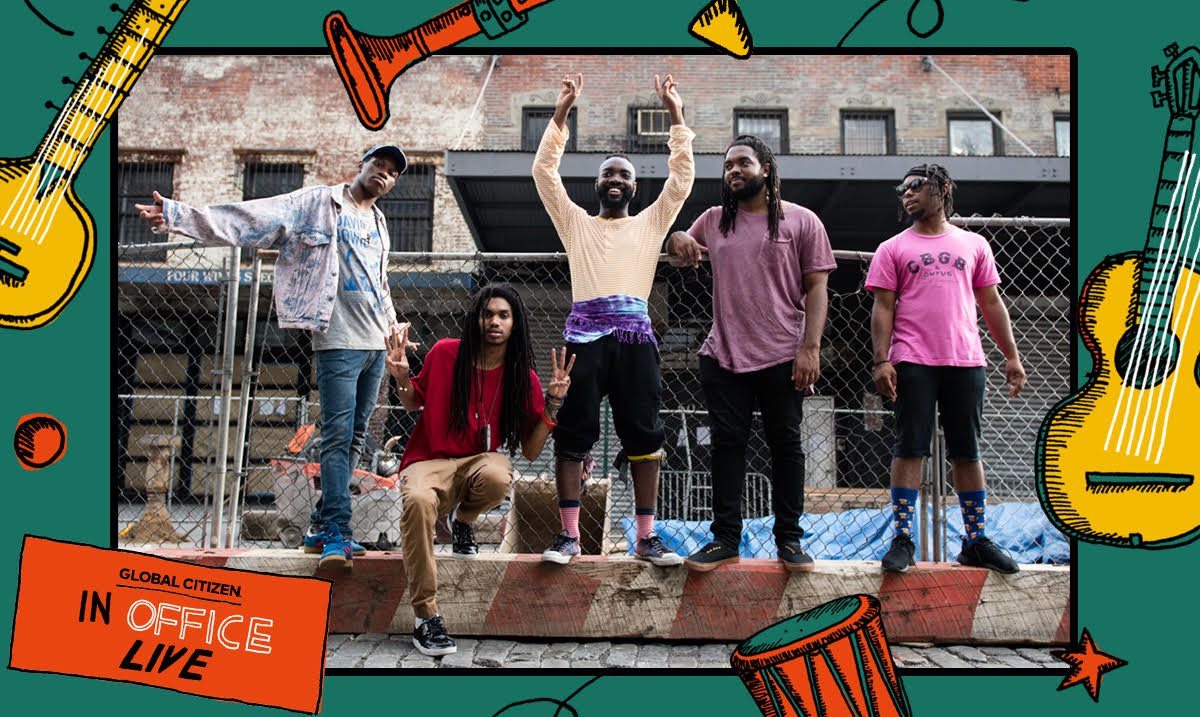 They came into the Global Citizen office on a monotonous Thursday afternoon, clad in colorful, clashing patterns, ankara prints, and beanies. With them they carried the instruments that would soon transform the entire space into a vibrant stage for all sounds soulful, or as the musical quintet calls it “vintage astral funk” and “dusted out hip-hop.”

They took a break from their sold out residency at the Blue Note — one of New York’s premiere jazz clubs — to play “Why iii Love The Moon,” “Somehow,” and “HelGa,” a song that invokes Helga Pataki, the character in the classic New York-based Cartoon “Hey Arnold” that follows a group of middle schoolers through their lives.

Like the characters in “Hey Arnold,” Phony Ppl emerged from a New York school — the Brooklyn band met in the hallways of the borough’s M.S.113 junior high school.

“We grew up playing instruments in schools,” Elijah Rawk, the group’s lead guitar player, told Global Citizen. “Aja [keyboard] and I literally met at a performing arts school and it gave us a lot of opportunities.”

Aja Grant, the co-founder of the group formed in 2008, nodded. “Yea, we wouldn’t be a thing if it wasn’t for the arts program in the New York City public school system,” he added.

Today, more than 236,000 students are enrolled in New York City’s art education programs in junior and high schools, according to the city’s Department of Education 2014-2015 report.

“And our teachers played a huge part in it too,” Elbee Thrie, the group’s cofounder and lead singer, said. “The teachers that we’ve had in the arts definitely made music into something we wanted to do in our free time.”

The band believes that a solid education creates a foundation for all future ambitions — and they’re fully aware of how the precarious schools found in many underserved neighborhoods can set kids up for failure.

Music, along with arts programs, is a way that students can spend free time that could otherwise derail them from their studies or lead them into problems.

Those involved in after school programs and courses outside requisites, like music and the arts, have been found to be less likely to be involved with drug and alcohol abuse, a report released by the Texas Commission on Drug and Alcohol Abuse found.

“It just gives you a certain kind of focus,” Rawk said. “A lot of us were practicing while a lot of others were outside doing dumb things...everyone in music programs chooses to be there. That kind of collective drive helps foster community for learning and accountability.”

This is exactly why the group feels they have a responsibility to give their time and pass down their knowledge to up-and-coming musicians.

“If a kid gets at least 45 minutes a day to be in front of an instrument and have it in their hands, it will affect them in such a positive way,” Matt ‘Maffyo’ Byas, the group’s drummer and rhythmic backbone, explained.

Rawk, Thrie shared, dedicates his spare time to teaching music lessons to anyone who is willing to learn.

“Someone like Prince learned from that kind of system,” the guitar player said. “He learned from an after school program that he used to go to in which a bunch of kids would learn music, and as they got older, would then teach the younger kids that came in. If the administration even considered to cut funding, we’d have to do a lot of work on the ground.”

For years, arts and cultural leaders have fought battles to maintain federal funding for the National Endowment for the Arts (NEA). This year, US President Donald Trump proposed a budget that would slash the NEA’s budget by $148 million.

But in early May, Congressional leaders rejected the administration’s proposal, and provided a small $2 million increase as part of a bipartisan spending deal.

“I think music does a good job at translating a lot of messages,” Rawk said. “For legacies like Bob Marley and John Lennon, music was the vessel to get them to be big icons for a lot of good in the world. So that’s also what we want to try to do.”

The band members also realize that an education can be undermined by where you live, and they worry that the changing cultural dynamics of Brooklyn is marginalizing a lot of families.

Thrie said that every day has become a battle to even live in the same place that the band had all of their experiences growing up in.

“We are a direct representative of Brooklyn’s 90s and 2000s culture — young, black men,” he said. “Without that environment, we wouldn’t be the people we are, we wouldn’t make the music we make.”

Over the last half decade, “The New Brooklyn” has become one of the epicenters for American gentrification. Today, this community faces the ever-growing issue of rising rent.

Since 2000, rent has risen by nearly 79% in the Brooklyn neighborhoods of Williamsburg and Greenpoint, according to a study done by the State of New York City’s Housing and Neighborhoods in 2015.

“There’s two sides of Brooklyn that I believe exist,” Bari Bass, the bass guitarist said. “There’s the really intense side — the hood — and there’s the afro-centric side. The second is my memory of Brooklyn which was a more positive side and the side that went first.”

That’s why the group wishes to help bring back the culture of their Brooklyn upbringing through their music and performances.

During their residency at the Blue Note, they have graced the same stage where legends such as Ray Charles, Dizzy Gilespie, Sarah Vaughan, and Fats Waller have performed in the past.

“Global Citizen means unity to me,” Thrie said. “No matter how different we are, or whether we know each other or not, I know that we all need the same things.”

Smiling, Byas added that, “it means being an everyday hero. It means you’re here to help me and I’m here to help you.”