Think you know which food is healthier?

It's time to test your healthy eating instincts.

Fact: 800 million people around the world struggle with crippling, life-threatening hunger on a daily basis.

But here’s another fact for you: over 2 billion people are obese or overweight. That’s more than double the number of hungry people in the world today.

The truth is, obesity is now right up there with hunger as a public health crisis—and it's not just affecting the wealthiest countries.

But let’s be real here: it’s not just that people are choosing to eat unhealthy foods all the time. Thanks to clever marketing and popular myths about food, it can sometimes be legitimately hard to tell health food apart from total junk.

Want to put your healthy eating instincts to the test? Try and guess which of the entrants in following food faceoffs are better for you. The answers might just surprise you.

(If you need a quick refresher on what it means to eat well, this explainer is a good place to start.) 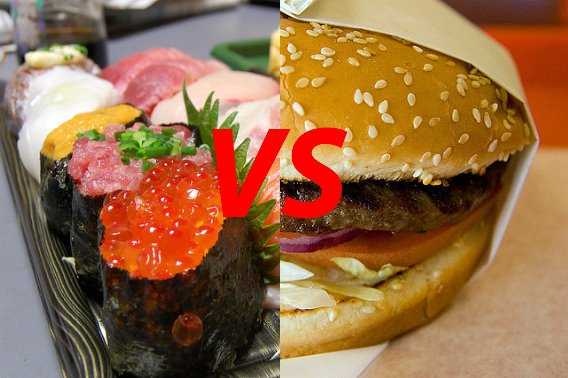 The hamburger: God’s gift to documentary filmmakers who want to make a point about obesity. A single Big Mac contains half the fat and a third of all the calories the US government recommends we eat daily. What’s a slim roll of rice and fish in comparison?

Hold your horses. Dietitian Rachel Beller points out that most sushi rolls pack in more than 300 calories and up to four bread slices’ worth of carbs. Add in the fact that most sushi meals include multiple rolls, and sushi’s supposed lead over burgers in the health department starts to look a lot slimmer. 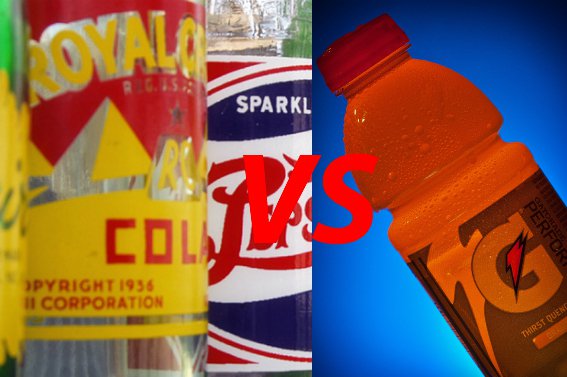 This one’s a no-brainer, right? No way the chosen beverage of the sporting gods is losing to tooth Kryptonite. Let’s take a look at the numbers on two of the best know beverages in these categories:

Coke: A 12 oz can of the world’s most famous sugary beverage has 140 calories and 39 grams of sugar.

Gatorade: A 12 oz serving of the brand’s flagship “Thirst Quencher” has 80 calories and 21 grams of sugar.

But here’s the catch: the bottles you find in stores typically contain more than one serving. Take the 32 oz bottles pictured all over the company’s website: one of those behemoths clocks in at over two and a half servings. I’m betting most folks down the whole thing without realizing they’re consuming over 200 calories and 50 grams of sugar. 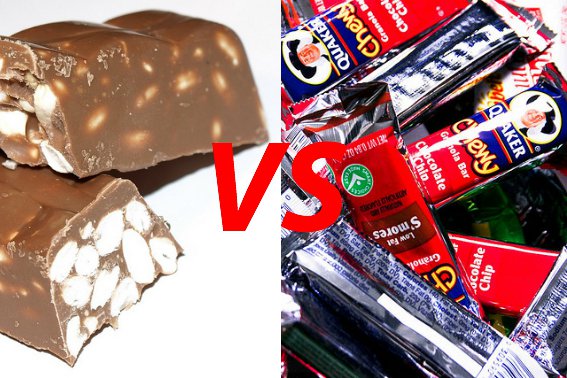 Candy is the undisputed champ of giving small children bellyaches. But get this: many so-called “energy bars” are just as sugary and caloric as their candy-aisle counterparts. (Here’s looking at you, Clif.)

It’s a clever trick, really, passing off empty calories as life fuel. Kudos to whichever marketing whiz coined that one.

A cinnamon-sugar-apple-strudel-chocolate-chunk cupcake cleverly disguised as a muffin, maybe. But a boring old bran muffin or something? That can’t possibly be worse for you than a sugary doughnut.

Here again, the devil’s in the serving size if the muffin is enormous (and stuffed with sugar) it is more unhealthy than a doughnut. Keep that in mind the next time you’re eyeing that muffin the size of a head of cabbage. 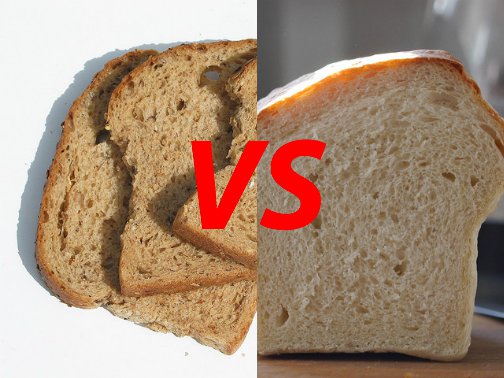 Flickr: How can I recycle this (left), Rebecca Siegel (right)

This one is basically a tie.

If you were to rank all the meaningless, totally unregulated labels food companies use to trick us into buying stuff, “multigrain” would be high on that list—right up there with “all-natural” and “local.” For all we know, the “multi” in multigrain could refer to three specks of whole grain the wind blew into a vat of dough at the bread factory. Don’t be fooled.

Starting to wonder if anything is healthy? You and me both.

But don’t despair! Eating right doesn’t have to be hard. Small changes make a big difference. Take sushi, for example: choosing brown rice over white adds a whole bunch of benefits to your favorite roll. And when it comes to bread, always take a look at the ingredients first to see if what you’re buying is really as nutritious as it sounds.

Want to learn more about nutrition around the world? Sign up to Global Citizen and check back throughout the month of July for more stories and insight.