If there is one thing that can change the life opportunities of a person in poverty, it’s an education.

Access to quality, accessible, inclusive education empowers an individual to be all they can be, to reach their potential and in turn enrich their community.

The fundamental power of education as a tool to end extreme poverty and inequality is recognised in the global community, particularly through the Millennium Development Goals (MDG), as it’s second goal states:

But now focus moves to the next 15 years of global collaborative action on eradicating extreme poverty-the Sustainable Development Goals (SDGs) are moving beyond getting ‘bums on seats’ to ensuring what is taught in the classroom is relevant and effective in unlocking the potential of each child. The SDG’s fourth goal puts it in a nutshell:

“Ensure inclusive and equitable quality education and promote lifelong learning opportunities for all”.

But what is inclusive and equitable quality education and what does it look like?

Dispossessed of their land, culture and language, many First peoples around the world are now only beginning to receive from the wider global community the recognition and respect their heritage deserves. This recognition is enshrined through the UN Declaration on the Rights of Indigenous Peoples in Article 13:

“Indigenous peoples have a right to revitalise, use develop and transmit to future generations their histories, languages, oral traditions, philosophies, writing systems and literatures…”.

As the home of world’s oldest surviving living culture, Australia is all the richer by embracing the culture and history of our first inhabitants.

But how does this fit into educational opportunities to fight extreme poverty?

The statistics on Indigenous disadvantage in education make dire reading:

1. When 60% of Aboriginal children start year one, they already significantly behind other kids

2. Only 35% of people living in a remote community have access to a library

Not all Indigenous children speak an Indigenous language. But particularly in remote communities, many children come to school with English as their second, third or fourth language. It makes sense that in the formative years of learning that thief first language is used as a base to cement other learning, as speech pathologist Mary-Ruth Mendel explains: “Learning to read and write requires the brain to be neurologically developmental primed. Children’s brains need to be stimulated in the first language they speak”. 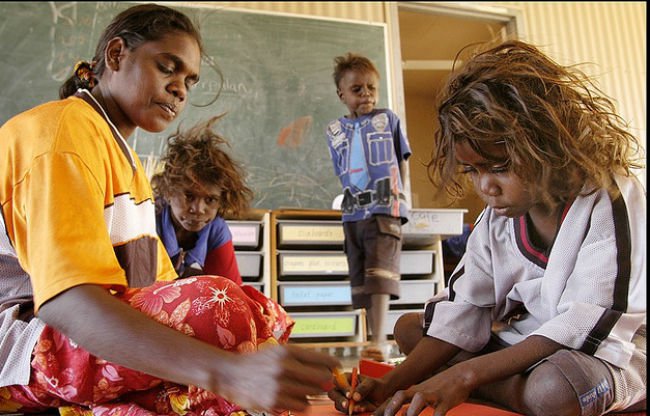 Indigenous children the world over deserve to be able to engage in education on their terms, that builds on their first language.

A small remote community in the Kimberley region of Western Australia refuse to let their language die, even with decreased funding from government sources.

In the 2014 Federal budget, $9.5 million over four years was taken out of the ‘Indigenous Languages Support Program’, leaving $11.1million a year to support and maintain the 145 Indigenous languages still spoken in Australia.

Using the power of the Internet, the Warmun community initially aimed to raise $10,000 towards a language program, with a dollar-for-dollar commitment from the Creative Partnerships Australia’s MATCH Program. They beat their target and have raised over $14,000. The grassroots community organisation ‘Ground Up’ want to continue their language program into the future, every dollar raised over their target will be put towards this.

Hear why teaching language is important to elder Peggy Patrick and her community here.

Bilingual education breathes life into the SDG goal of inclusive and equitable quality education. Inclusive and equitable education means that First peoples’ are not disadvantaged from the moment they walk in the school gate. It means we actually mean what we say about respecting Indigenous peoples rights. It means allowing people to use their mother tongue to cement the foundations of their own learning–so they can use education as the best tool it can be to fight extreme poverty and inequality.

Article contributed by Linda Goncalves in support of Australian Aid.

“They don’t call it mother tongue for nothing.” Can bilingual education help fight poverty?