A motorists on Highway 101 watches flames from the Thomas fire leap above the roadway north of Ventura, Calif., on Wednesday, Dec. 6, 2017.
Noah Berger/AP
Environment

The Photos From California's Wildfires Are Just Insane

The flames have so far forced tens of thousands to evacuate and have even penetrated Los Angeles.

Southern California residents escaping a series of massive wildfires faced a scene straight out of Mordor as they drove along busy highways surrounded by burning hillsides this week.

The wildfires have charred hundreds of homes, shut down major roads and forced tens of thousands of SoCal residents to evacuate. Meanwhile, hurricane-level winds gusting across swaths of unusually dry vegetation have further fueled the fires, driving flames into Los Angeles, the second largest city in the US.

Scientists say climate change is partly to blamefor these massive fires, but the biggest problem is a lack of rain. The region typically receives precipitation, which moistens vegetation and prevents the spread of wildfire, earlier in the year.

As an army of firefighters combat the blaze — including local departments from Oregon and towns throughout California — Southern California residents are bravely handling the crisis.

“These are days that break your heart,” Los Angeles Mayor Eric Garcetti said at a news conference. “These are also days that show the resilience of our city.” 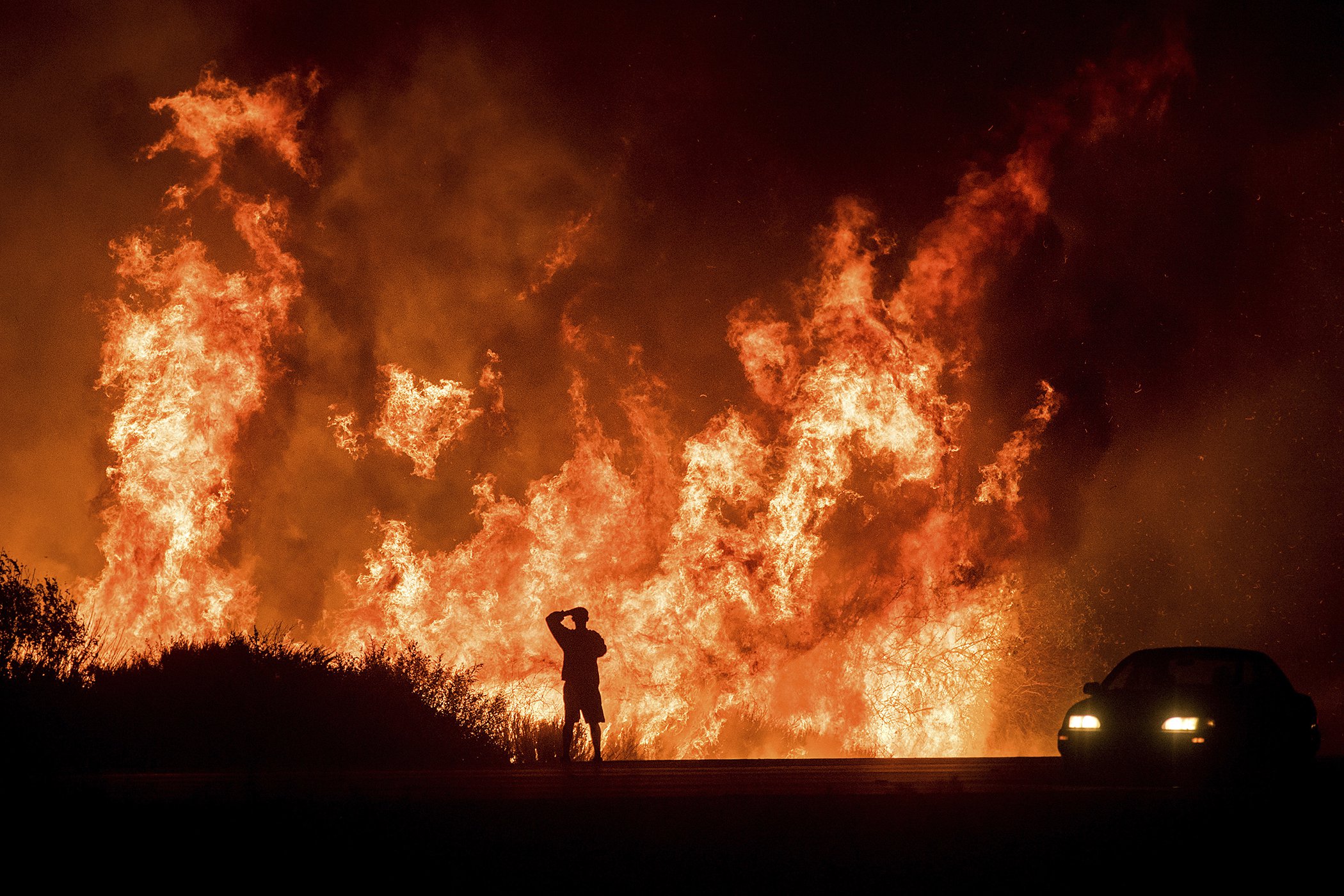 A motorists on Highway 101 watches flames from the Thomas fire leap above the roadway north of Ventura, Calif., on Wednesday, Dec. 6, 2017. As many as five fires have closed highways, schools and museums and cast a hazardous haze over the region.
Image: Noah Berger/AP 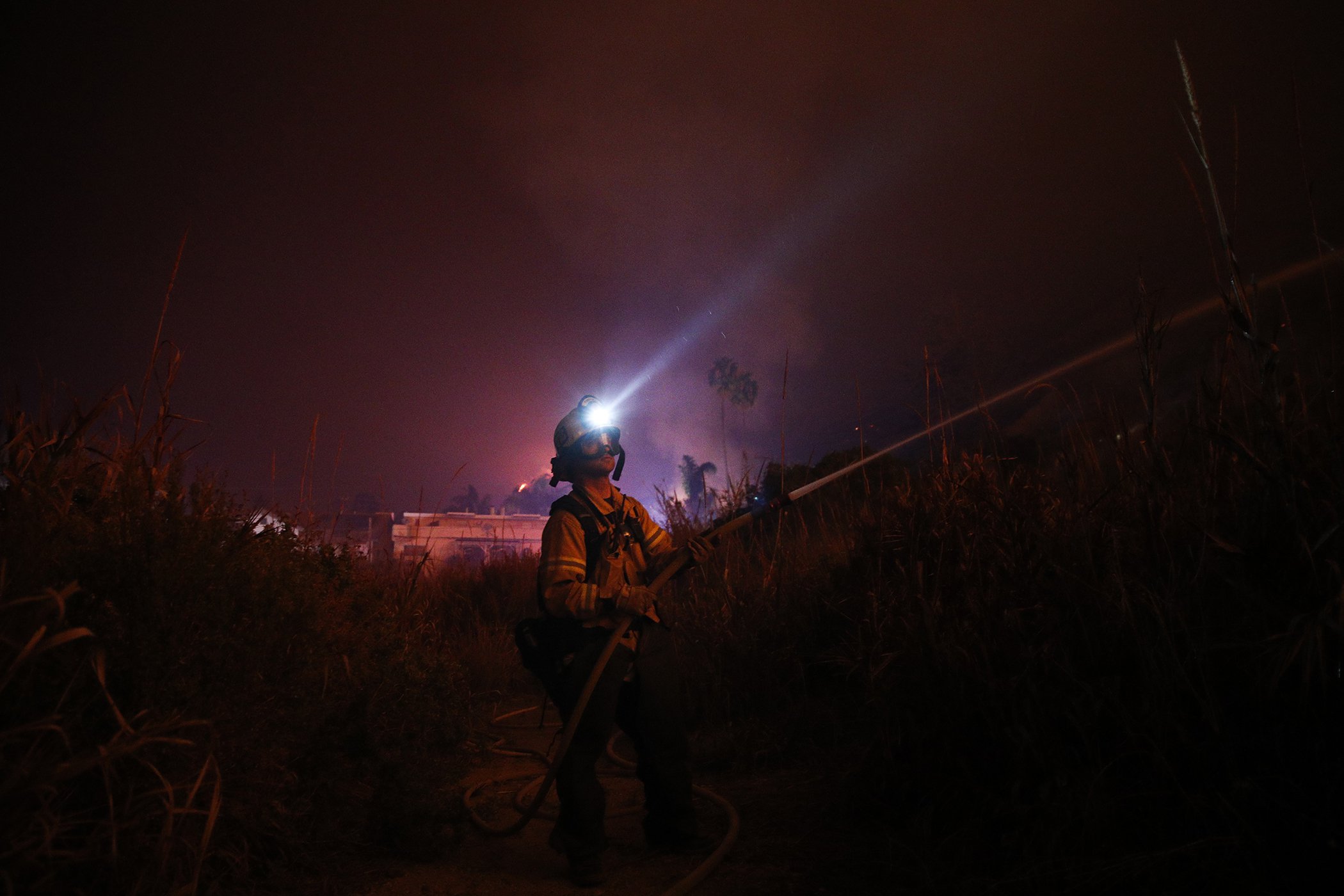 Firefighter Ryan Spencer battles a wildfire as it burns along a hillside toward homes in La Conchita, Calif., Thursday, Dec. 7, 2017. The wind-swept blazes have forced tens of thousands of evacuations and destroyed dozens of homes.
Image: Jae C. Hong/AP

A firefighter battles a wildfire as it burns along a hillside near homes in Santa Paula, Calif., on Dec. 5, 2017. Fast-moving, wind-fueled brush fire exploded to about 10,000 acres in Ventura County Monday night, forcing hundreds of people to flee their homes, officials said.

Southern California is burning. “This is a recurring scene in my dreams,” wrote photographer @yamphoto. The Thomas fire in Ventura has burned 45,500 acres, forced 27,000 evacuations and destroyed 150 buildings as it creeps only 1/4 miles from City Hall. Over near Sylmar, the Creek fire has burned 4,000 acres and shut down the 210 Freeway. Now a third fire, the Rye fire in Santa Clarita, has erupted, shutting down the I-5 in both directions. Conditions are only expected to get worse as the day goes on. Get live updates through the link in our bio.

Los Angeles Times photographer Marcus Yam was on the scene of the Thomas Fire in Ventura, Calif., where he captured this image. As of yesterday, the blaze has burned 45,500 acres, forced 27,000 evacuations and destroyed 150 buildings. 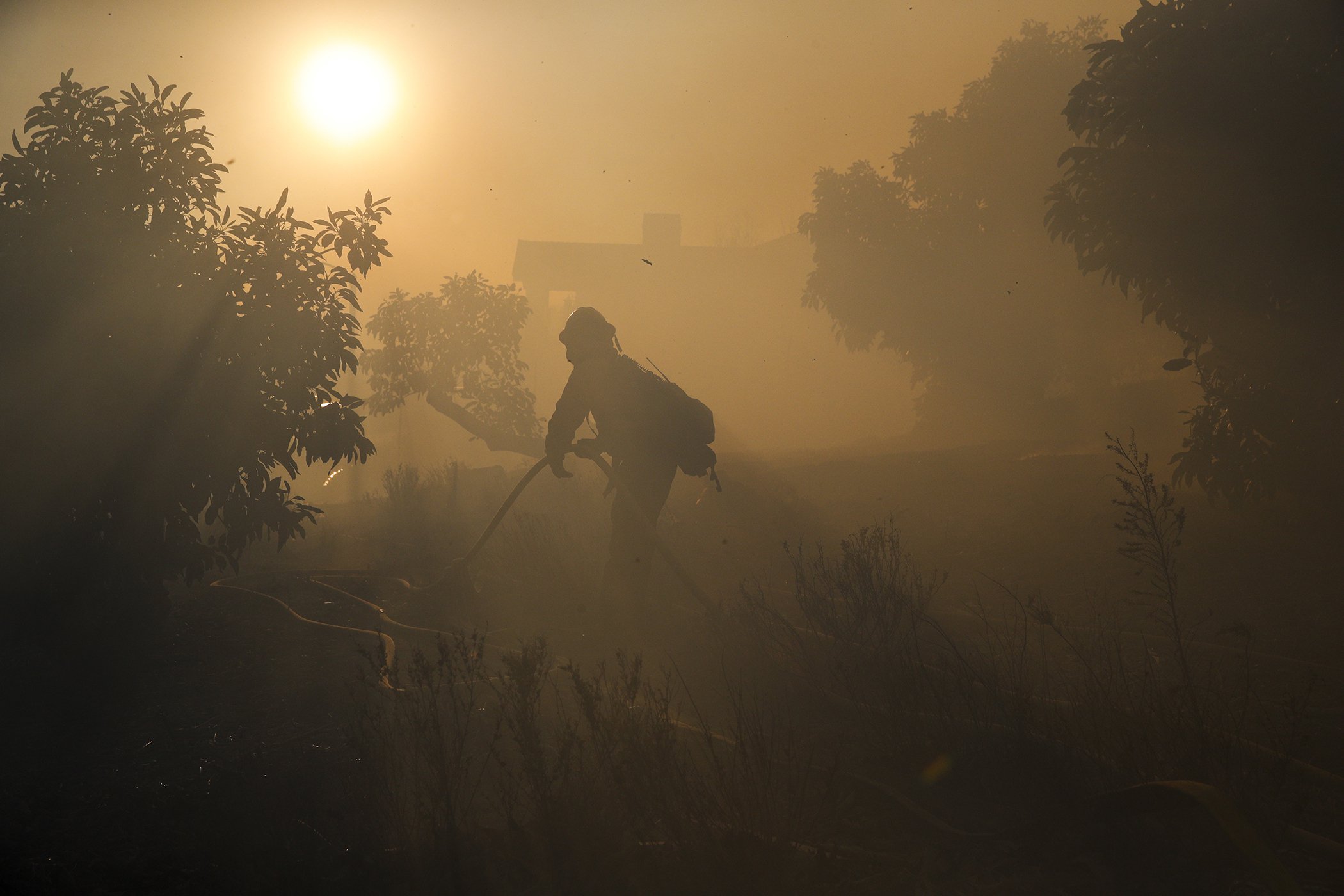 A firefighter pulls a water hose as a wildfires continues to burn on Dec. 5, 2017, in Santa Paula, Calif. Raked by ferocious Santa Ana winds, explosive wildfires northwest of Los Angeles and in the city's foothills burned scores of homes and structures.
Image: Jae C. Hong/AP

A firefighter sprays water at the remains of an apartment complex destroyed by the Thomas Fire on Dec. 5, 2017 in Ventura, Calif. 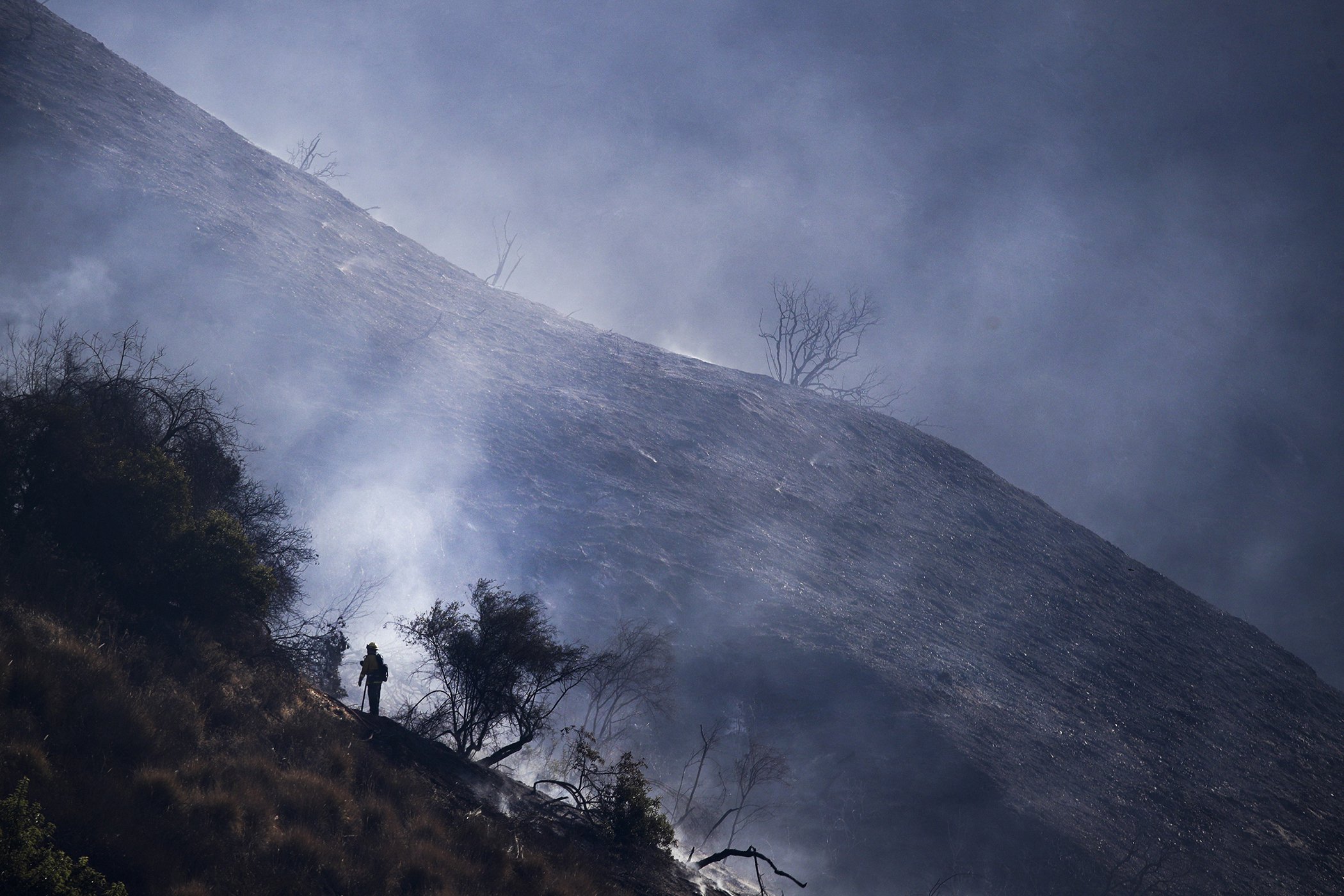 A firefighter stands on a hillside scorched by a wildfire, Dec. 6, 2017, in the Bel-Air neighborhood of Los Angeles. A dangerous new wildfire erupted in the tony Bel Air area of Los Angeles early Wednesday.
Image: Jae C. Hong/AP

Firefighters work to save burning houses along Linda Flora Drive during the Skirball Fire in Los Angeles, Calif., Dec. 6, 2017.

A firefighter controls flames burning in a home at the Skirball Fire in the upscale Bel- Air section of west Los Angeles, Calif., Dec. 6, 2017.

A strong wind blows embers around a resident hosing his burning property during the Creek Fire on Dec. 5, 2017 in Sunland, Calif. 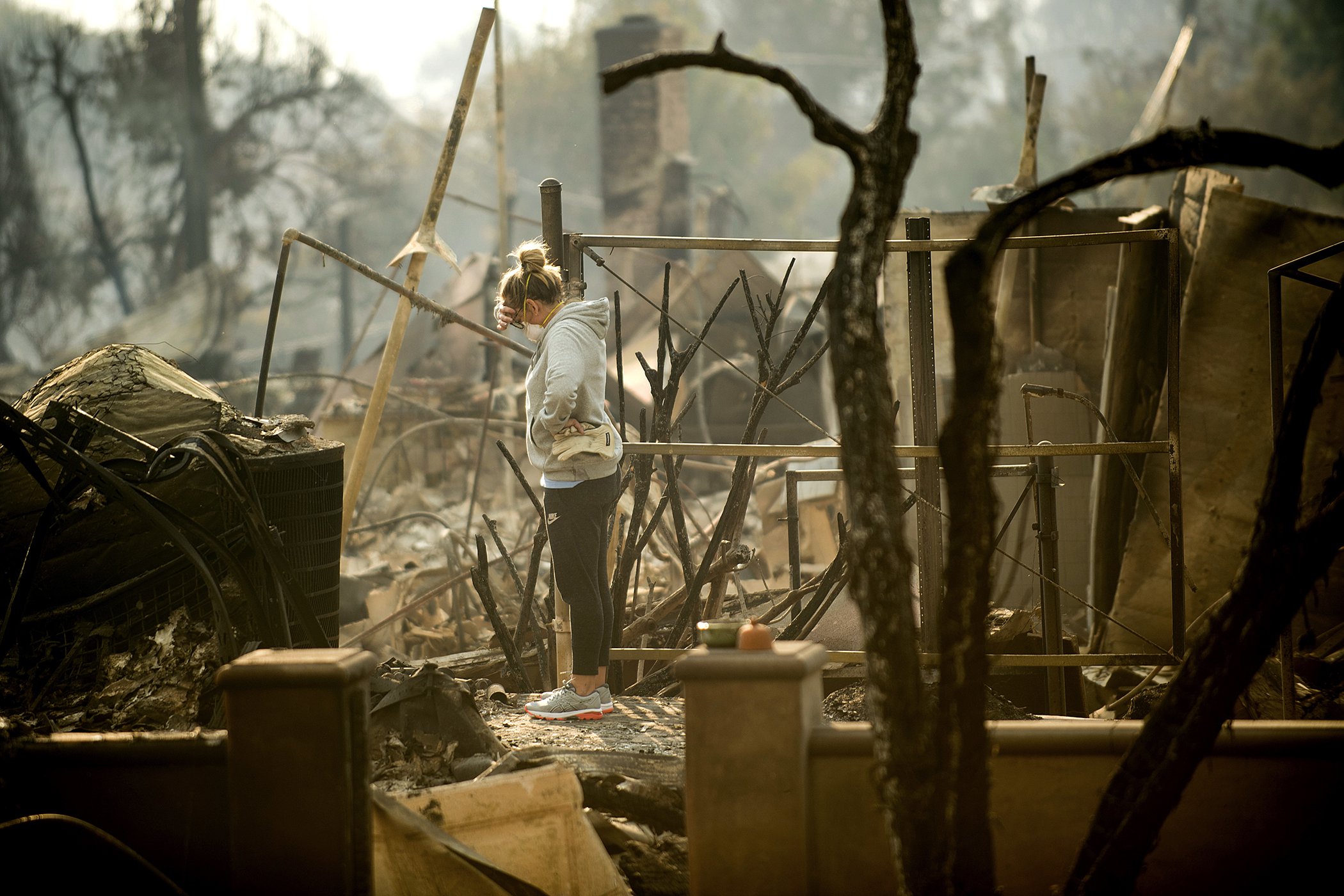 Bree Laubacher pauses while sifting through rubble at her Ventura, Calif., home following a wildfire on Dec. 6, 2017. A barbecue smoker and her son's batting cage survived the blaze.
Image: Noah Berger/AP 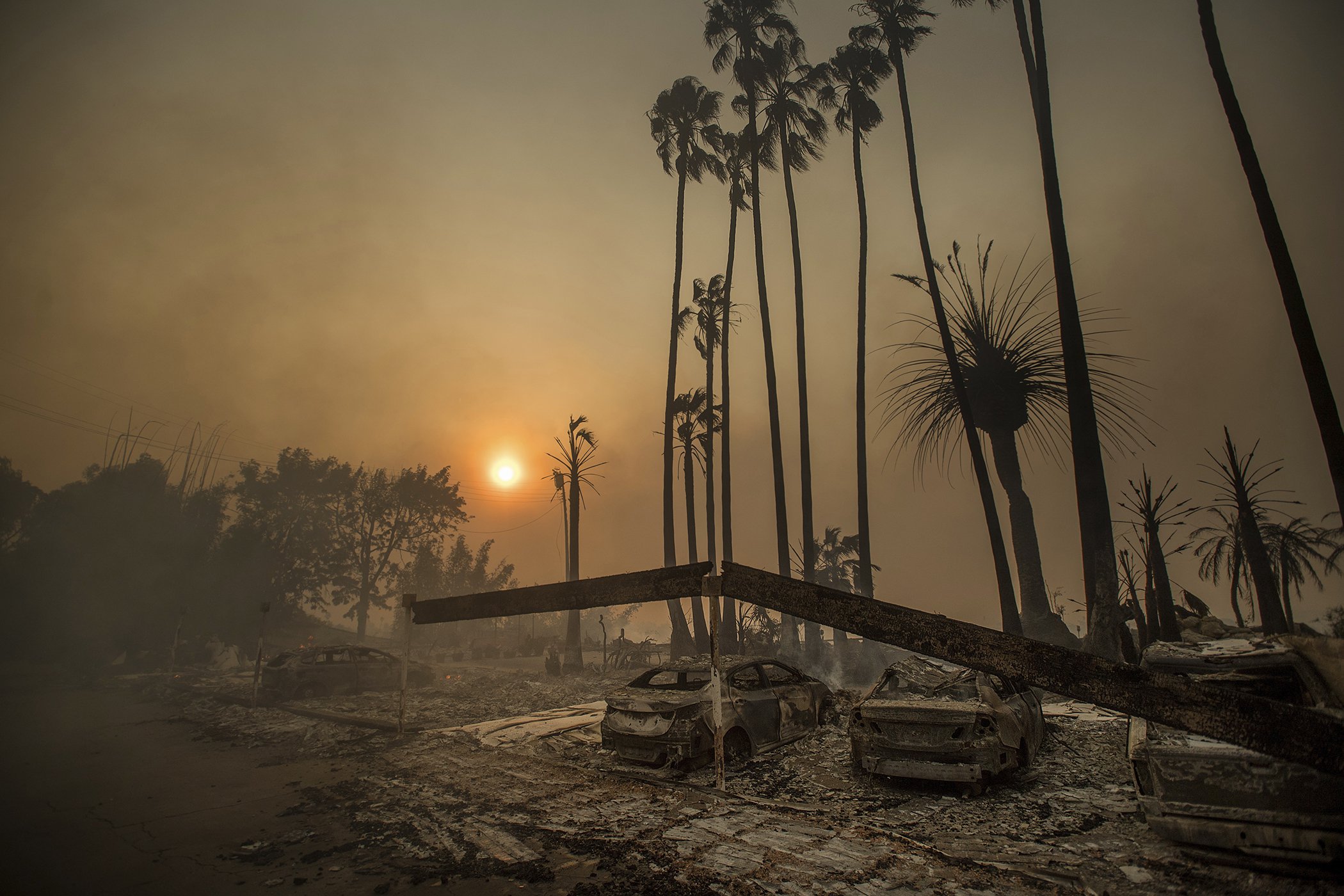 Smoke rises behind a leveled apartment complex as a wildfire burns in Ventura, Calif., on Dec. 5, 2017.
Image: Noah Berger/AP

A firefighter battles a wildfire as it burns along a hillside near homes in Santa Paula, Calif., on Dec. 5, 2017.

Edward Aguilar runs through flames to save his cats at his home in Casitas Springs as the Thomas Fire burns in Ventura County. #fire #thomasfire #latimes #nikon #photography #photojournalism

The Creek Fire burns on a hillside in the Shadow Hills neighborhood on Dec. 5, 2017 in Los Angeles, Calif. 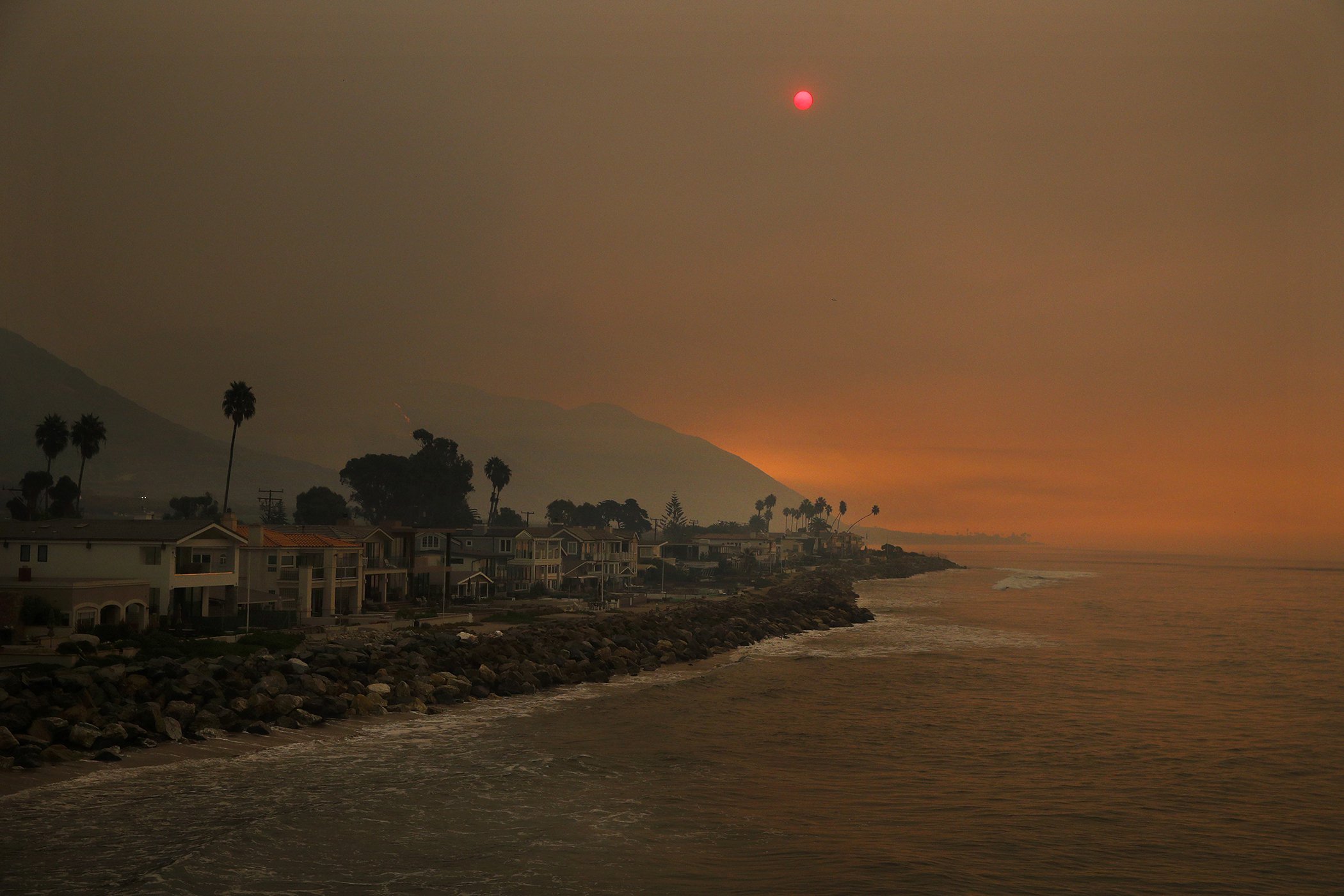 Homes stand along the beach as the sun is visible through thick smoke from a wildfire, Dec. 6, 2017, in Ventura, Calif.
Image: Jae C. Hong/AP