These Kenyan women are powering their communities—literally

This month we’re all about sharing stories of girls and women around the world who are beating inequality and empowering their communities along the way.

Well, here’s one about a different sort of female empowerment—the kind that lights up the night, makes light bulbs shine bright, and literally powers communities.

It also features donkeys lugging solar panels around the Kenyan savanna, which is not a sentence I get to write everyday.

The Thomson Reuters Foundation brings us this report about a remarkable effort to bring solar energy to the Maasai people of southern Kenya—a community better known for its pastoral lifestyle, distinctive attire, and lion-hunting prowess.

The best part of the story? (Donkeys notwithstanding.) Maasai women are taking charge of this green energy revolution.

Back in September, a Nairobi-based energy developer by the name of Green Energy Africa launched a project to teach groups of women in two mostly rural counties how to use and install solar panels. Called the Women Entrepreneurship in Renewable Energy Project, or WEREP, the project helps participants hone the technical and entrepreneurial skills they need in order to be solar energy ambassadors in their communities.

The company then provides women with all the necessary parts, which they take home—here’s where the donkeys come in—and sell to members of their communities at a small profit. Groups of women pool their earnings to buy more solar products, and the cycle continues, bringing solar power to more and more people. 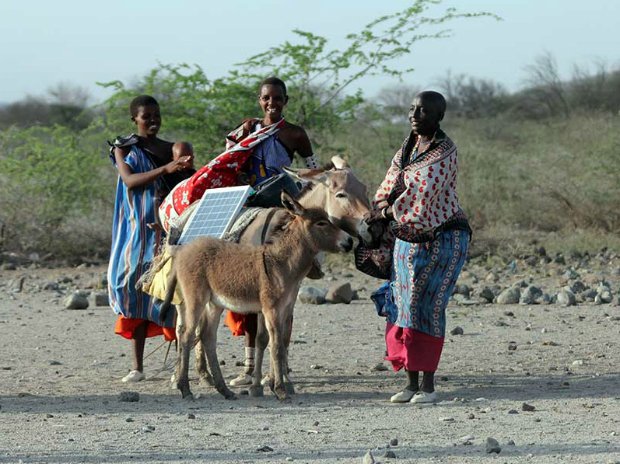 The Maasai solar project is a good thing for three big reasons.

First, it puts a renewable source of energy in the hands of people who are normally stuck burning kerosene or firewood to light their homes and cook their food. Exposure to indoor air pollution caused by the use of such fuels results in 4.3 million deaths worldwide every year, so making an alternative energy source available can quite literally save lives.

Second, solar energy helps save money. Instead of shelling out cash daily to buy fuel or charge their cell phones at a local market, people can self-produce the energy needed to meet their needs.

(If you’re wondering why anyone from rural Kenya would need to charge a cell phone, keep in mind that more people have a cell phone than have access to a toilet worldwide. The explosive growth of cell phone usage throughout Africa is a big reason why.)

The third reason why solar energy is great for the Maasai is that it gives women in the community something they don’t normally enjoy: ownership. Jackline Naiputa, one of the women leading the movement, described just how big a deal that is for her and her fellow businesswomen.

"Our community customs do not allow women to own any property," she told Reuters. "But now women here own the solar technology, and it is something we are very happy about."

Empowering girls and women to take charge in their communities is one of the keys to eliminating extreme poverty worldwide. Kenya’s trailblazing solar entrepreneurs are doing just that. Ladies of Kenya, we salute you!