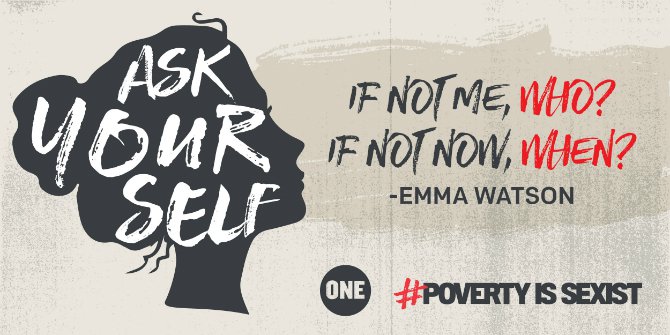 Sexism is global. The fight against it should be too.

Join thousands of others who have come together to send a powerful message: we won't end extreme poverty without ending global gender equality.

Nowhere on earth do women have as many opportunities as men. Nowhere.

While the debate around this truth rages everywhere, girls and women living in extreme poverty – those often hit hardest by the injustice of gender inequality – have been left out of the conversation.

This must change. The fight for gender equity is global.

Some 62 million girls are denied the right to education. Half a billion women can’t read. 155 countries still have laws that discriminate against women.

Last year, you signed up to end extreme poverty, and because poverty is sexist, you promised to tackle the gender inequality that keeps people poor.

This year, there are a series of historic opportunities to test your commitment and to make meaningful progress by delivering:

Funding in 2016 at the Nutrition for Growth and Global Fund Summits to help girls and women fight HIV and malnutrition, because it is an outrage that girls account for 74% of all new HIV infections among adolescents in Africa and 40% of women on the continent suffer from anemia which results in 20% of maternal deaths;

Policies which support female economic empowerment: access to electricity, connectivity, education and justice, so girls and women have the right to own property, start a business and decide when and whether to marry;

Better data on the girls and women we can’t see, don’t know exist and therefore can’t yet deliver for.

International Women’s Day must be about advancing girls and women everywhere.

This article was contributed in support of ONE. The views expressed here are not necessarily those of each of the partners of Global Citizen.