There's an apocalypse-proof underground vault for the world's food. You're not allowed inside.

As my ex-girlfriends will assure you, I am a strange man. I don’t want to go an all-inclusive beach resort for a holiday, I want to go looking for gorillas in the Rwandan jungle instead. I’ve spent the last five years contemplating whether I could spend 26 days eating the alphabet (Day one: apples, apricots, avocados. Day two: beef, beans, broccoli. The real struggle is in the I,J,K zone). One of my main plans for the rest of 2015 is to walk from one side of Luxembourg to the other wearing a tuxedo. #TuxAcrossLux

When I get in these moods, I end up in strange corners of the internet, reading about things I didn’t previously know I was interested in. One day, I was learning about Svalbard, a group of Norwegian islands way off the top of mainland Norway, and well inside the Arctic Circle. It’s a tremendously cold place, and home to a grand total of 2,642 people. Because it’s so ridiculously far north (Svalbard’s only town claims to be the northernmost in the world), it has that “midnight sun” thing during the summer, and a whole lot of darkness in the winter. How much is a “whole lot”? When the sun sets on October 26, it doesn’t rise again until February 15. Imagine how acute the need would be for a Valentine’s Day spray tan. Unbelievable. 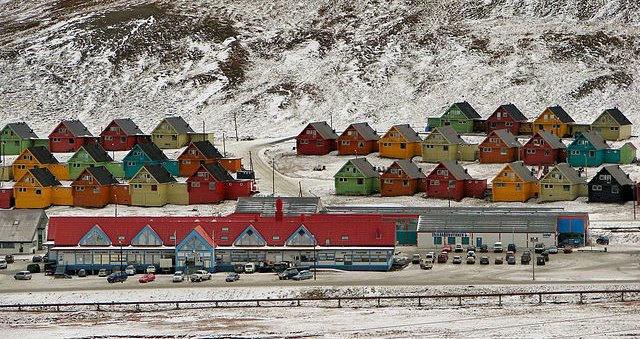 It has polar bears, too. POLAR BEARS. My urge to see this place was intensifying, and by this time I had another tab open in my web browser, where I was assessing flight prices and trying to convince myself that the prices weren’t too bad (much cheaper than Greenland, in case you were wondering... cos I was wondering.). But back on the original browser tab, I found maybe the strangest and most interesting thing yet about Svalbard. As the title of this article suggests; there’s an apocalypse-proof underground vault for the world’s food. I’m not allowed inside, you’re not allowed inside, polar bears are not allowed inside, and I can only presume that zombies are not welcome, either.

A vault near the North Pole. A pole vault?

What a stupid question. Who’s going to wear athletics shorts when it’s minus 22 degrees.

A vault near the North Pole…

That’s right. The vault was opened in 2008, and is located 120 metres (400 feet) inside a sandstone mountain. There’s another reason why you’re not getting inside… the vault has no permanent staff on-site, so there’s nobody there to answer the front door. And it also has a very serious security system, so put that coat hanger down. 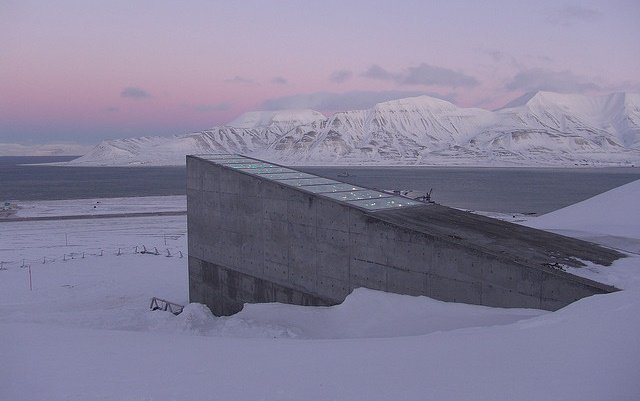 It doesn’t contain the world’s food in the way that a very very big supermarket might, but instead it’s all there in the form of seeds. And not just the seeds of plants that we currently use for food, but the seeds of plants in general. It’s called the Svalbard Global Seed Vault, and as of 2015 it contains around 840,000 seed samples from 4,000 different species. All stored in airtight, heat-sealed, aluminium bags at -18 degrees Celsius, or -0.4 degrees Fahrenheit. And it’s just getting started… the facility has the capacity to store 2.5 billion seeds.

The construction of this big underground seed freezer was funded by the Norwegian Government, and the facility is operated by Norway, and a trust organisation that gets its funding from governments, and private foundations.

I guess “because it’s rad” isn’t enough of a reason to go to this much effort. The real reason is because seeds are REALLY important. They’re our toolbox for solving many of humanity and the world’s problems, both now and in the future.

While there are other “seed banks” in the world, the Svalbard Global Seed Vault is the bulletproof backup plan for if something goes wrong with the other ones. It’s located a very long way away from major human settlements, it’s in a geologically stable zone, it’s buried under a frozen rock mountain, and funded by a government with a very long term vision for its finances. If other seed banks in the world are destroyed by fire, contamination, mismanagement, equipment failures, nuclear weapons, asteroids, armies, or floods, the one in Svalbard will be there. With seeds.

That’s not a completely satisfying answer

Ok, to clear this up, we need to have a look at why biodiversity matters. Otherwise, we could just build a seed vault that contains the seeds of the 100 most commonly grown crops in the world, and be happy with that. International food security problem: solved!

Biodiversity refers to the variety of different living organisms that are present in the world, and within specific ecosystems. We’re learning more each year about how all of these plants and animals click together to create the kaleidoscope of different environments in the world, but there’s still so much that we haven’t yet figured out. Basically, we don’t know enough to conclude that any plants or animals are “unnecessary”, so making a point of retaining biodiversity is our only way of not losing very important things. Some animals eat only one type of plant, some plants require one particular type of bee to pollinate and reproduce. 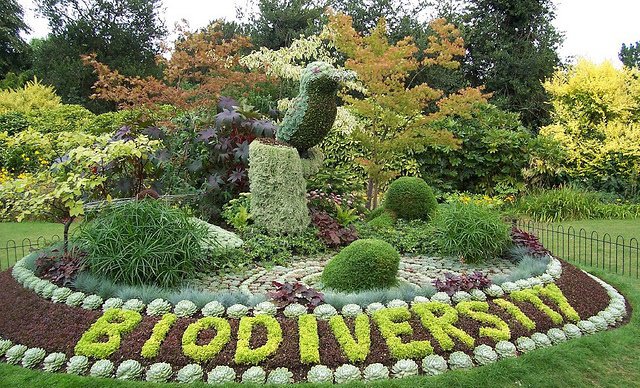 Here's a garden that spells biodiversity. It backs up its sentiment by being composed of numerous different plant species. There also appears to be a bird made out of plants.
Image: Worldislandinfo

But back to food for a minute. The world is getting better and better at producing food. With the global population growing like it is, it’s lucky we’re getting better at it. But globalisation is making diets worldwide look more similar to each other. A few centuries ago, basic food items like corn, potato, and rice were only available in the parts of the world they grew naturally in, so diets varied greatly depending on where you were.

In the 21st century, we’re in a situation where there are more different foods in our local supermarket, but compared to the millions of different plants that occur in the wild, we’re really only growing a tiny, tiny fraction of them on a large scale. And they’re taking up most of the world’s farmland. In this sense, we’re becoming pretty reliant on the handful of crops that we’ve decided that we really like.

If disease, natural disaster, or some other unexpected event made it impossible to grow or eat these core products, it’s not just some people who are in trouble, it’s almost everyone! And I'm not talking about how Americans panic about the immediate future of their guacamole habit if it's a lean year for avocados. To go back to my toolbox metaphor from further up, in a scenario where the global food supply is fundamentally disrupted, you’d want to have as many tools at your disposal as possible. Whether that’s a species of potato that’s different enough to be resistant to a disease that’s claimed the common types, or whether it’s a type of grain that can grow in very dry places, it’s biodiversity that could well be the key to stopping entire nations from grinding to a halt and plunging into famine/poverty.

So this is why there are seed vaults in various parts of the world. With any luck, they won’t have a major role to play in our lifetime, or our children’s lifetime. And that’s why there’s a backup seed vault on a frozen island off the top of Norway. When the stakes are as high as the future of the world, even your backup plan should have a backup plan.

I love you, Arctic seed vault, even though you never want to hang out with me.

This vault keeps food secure but the world needs more than just a vault. Go to TAKE ACTION NOW and send a tweet to world leaders telling them to prioritize food security.