There Are No Headscarf Emojis, But a Muslim Teen Is Trying to Change That

Rayouf Alhumedhi couldn’t find an emoji to express who she was while group chatting with friends. 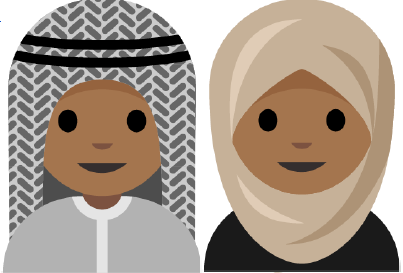 For the half a billion women around the world who wear a headscarf each day, sending a text message or posting a status update can mean compromising how they express themselves.

Without a headscarf emoji, many choose an emoji that doesn’t fully represent who they are. German teenager Rayouf Alhumedhi is trying to change that.

Read More: This Journalist Was Criticized for Wearing a Hijab While Reporting Nice. Here’s Her Perfect Comeback

Alhumedhi is at the center of a new battleground for diversity, inclusion, and representation. As emojis have become an increasingly common language in the modern world, petitions have been launched to add new images representing different groups: redheads, for instance, as well as LGBT individuals, African Americans, and bearded men.

Alhumedhi, who is originally from Saudi Arabia, came up with the idea for an emoji of a woman wearing a hijab when she was trying to pick an avatar for a WhatsApp group chat with her friends, she told The Washington Post.

Alhumedi’s friends who don’t wear headscarves had no problems finding emojis to represent themselves in the chat, but Alhumedi did.

“For me? I had to opt to not use an image of a woman wearing a headscarf. Because there isn’t one,” she said.

Now Alhumedhi has partnered with a former New York Times reporter, Jennifer 8. Lee, and together the pair have written a proposal to submit to the Unicode Consortium, which oversees symbols that are on keyboards.

“In the age of digitalization, pictures prove to be a crucial element in communication,” the proposal says. “Roughly 550 million Muslim women on this earth pride themselves on wearing the hijab. With this enormous number of people, not a single space on the keyboard is reserved for them.”

Alhumedhi says she has received criticism from those who think the hijab represents the oppression of women and should not be included, but she argues that the headscarf allows her to feel more liberated by allowing the world to see beyond her appearance, according to the Times.

European countries including France and Germany, where Alhumedhi lives, have been embroiled in a debate over whether headscarves are oppressive and should be banned as a matter of public policy.

“I would like to be represented and acknowledged,” she wrote on Reddit. “It might seem baffling, but when I wear the headscarf I actually feel liberated because I’m in control of what I want to cover. The headscarf allows for people to see past a woman’s beauty and see her for her knowledge.”

The proposed design for the hijab emoji would allow the headscarf to be paired with any existing human emoji, a bit like outfitting a paper doll, the Post reported.

Alhumedhi’s proposal will go to committee meetings at the Unicode Consortium and could be formally considered by November of this year, according to the Post. If it is approved, individual companies can then opt to design and include the emojis in their software sometime in 2017.