14 Beautiful & Compelling Photos From Around the World This Week

Around the world, individuals fought back against injustice.

It was a trying week for individuals seeking equal rights and opportunities around the world, as migrant DREAMers protested for legal status in the US, African migrants journeyed to Europe in search of a better life, and college students demonstrated in support of press freedom in the Philippines.

In Bangladesh, Rohingya refugees driven from their homes in Myanmar waited in massive lines for relief supplies and Palestinians across the Levant region of the Middle East sought alternative sources of aid after the Trump administration announced it would cut US funding.

Off the coast of China, an oil spill bigger than Paris bloomed across the ocean surface after a tanker ship collided with another vessel.

After temperatures reached -88.6 degrees Fahrenheit in northern Russia, a viral photo of a woman’s frozen eyelashes punctuated the true meaning of freezing for the rest of the world. In tropical Papua New Guinea, a smoldering volcano poured smoke into the air, signalling an impending explosion.

Yet, in the face of such hardships, at least some in power seem to hear the voices of the people affected. During a trip through South America, Pope Francis will meet with indigenous groups in the Amazon affected by mining and overdevelopment. 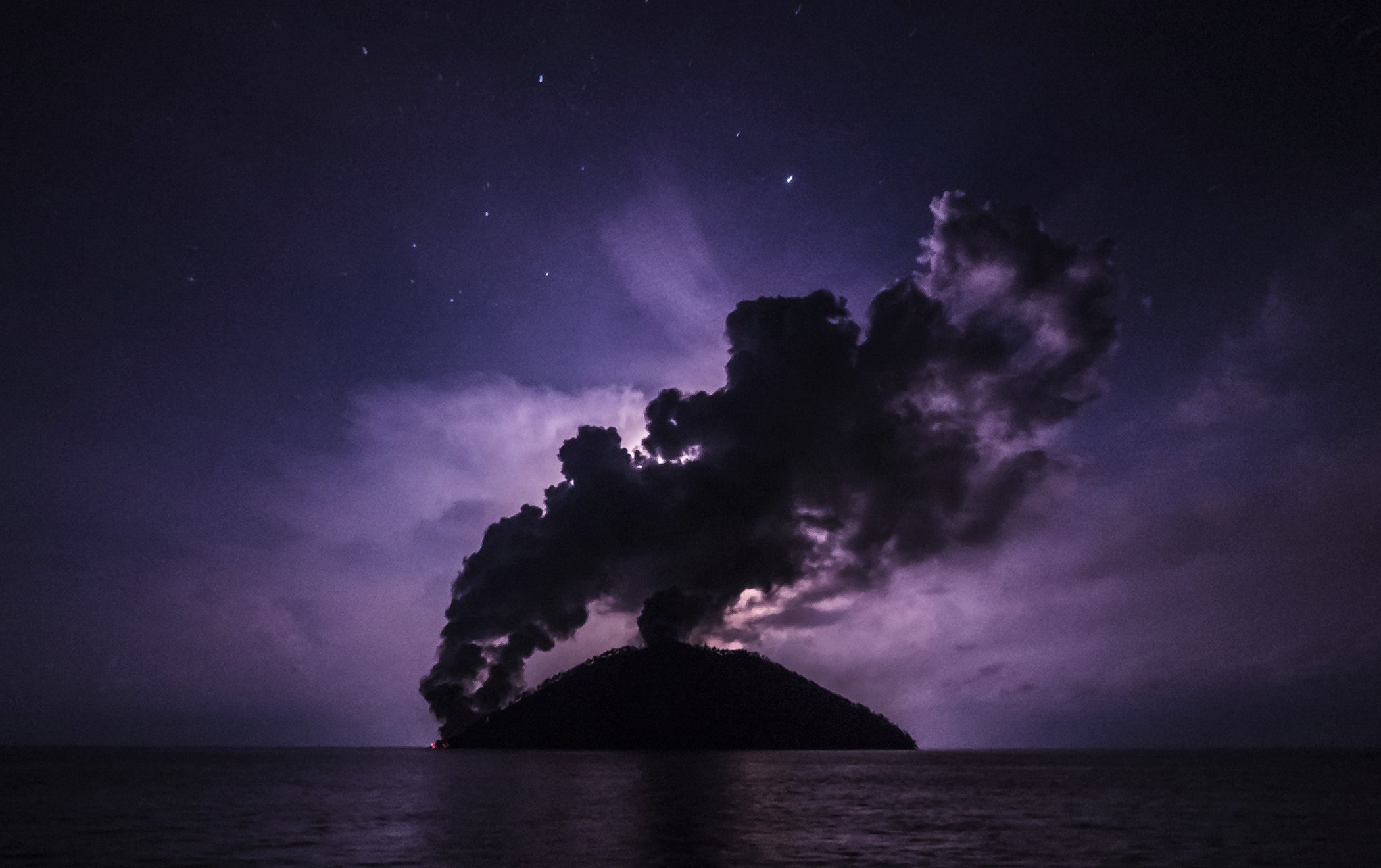 2) DREAMers: Demonstrators hold illuminated signs during a rally supporting the Deferred Action for Childhood Arrivals program (DACA), or the Dream Act, outside the U.S. Capitol building in Washington, DC, on Jan. 18. The House passed a spending bill Thursday to avoid a US government shutdown, but Senate Democrats say they have the votes to block the measure in a bid to force Republicans and President Donald Trump to include protection for young immigrants.

3) Migrant Crisis: An African migrant wait in the railway station to try to cross the border between France and Italy on Jan. 13 in Bardonecchia, Italy. With the the closure of the French border in Ventimiglia, many migrants and refugees are now trying to cross the Italian-French border crossing the Colle della Scala (Italian Alps) despite snow and extreme weather conditions. In the last month, alpine rescue volunteers climbed through the hairpin turns to recover migrants in difficulty many times. 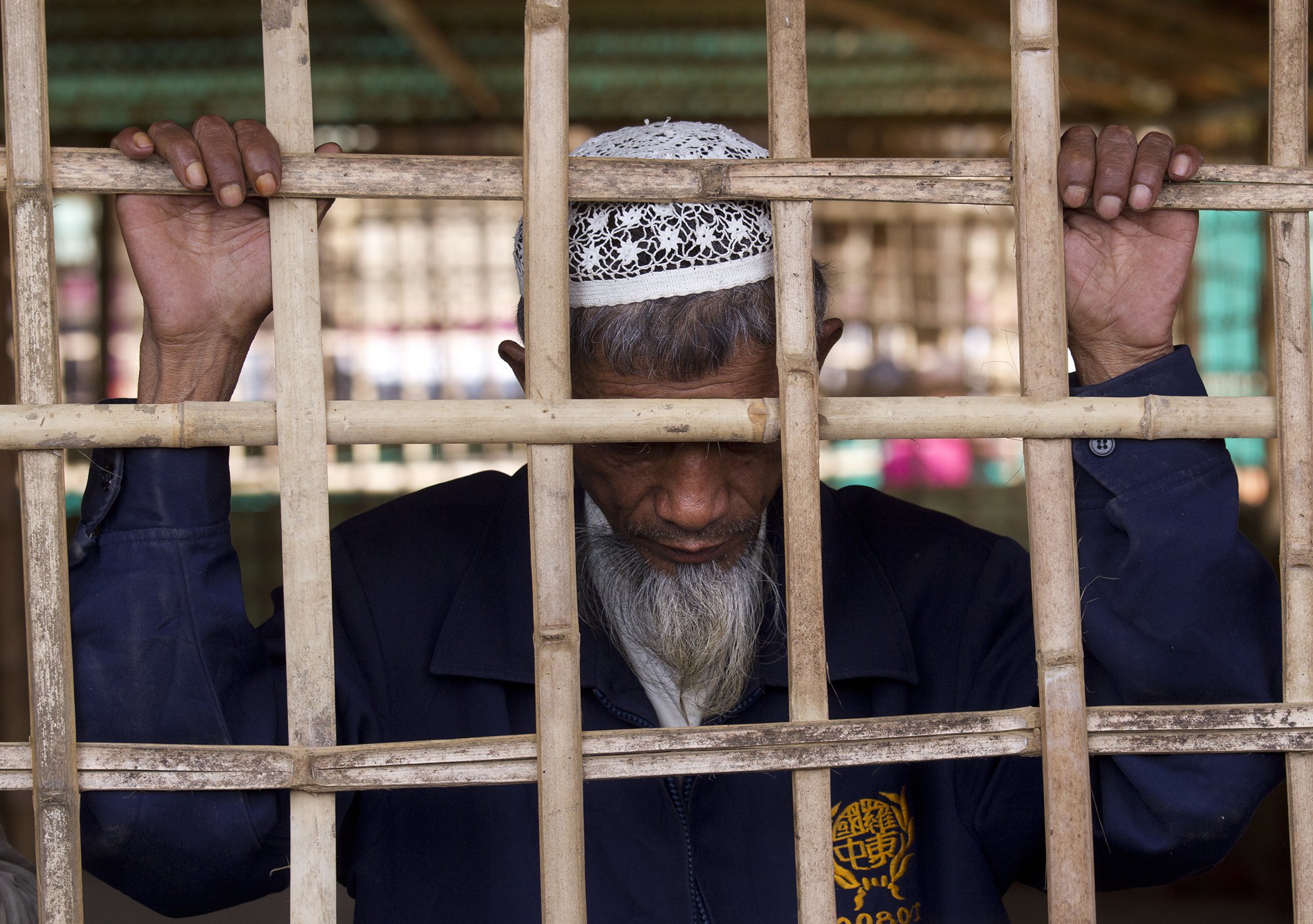 4) Rohingya Refugees: A Rohingya refugee reacts after seeing the queue for relief material at Kutupalong refugee camp near Cox's Bazar, Bangladesh on Jan. 17. Bangladesh and Myanmar have agreed that they will try to complete the repatriation of hundreds of thousands of Rohingya Muslim refugees who fled from violence in Myanmar within two years, Bangladesh's Foreign Ministry said.

6) Protest in the Philippines: College students participate in a protest to defend press freedom in Manila on Jan. 17. Philippine President Rodrigo Duterte's government urged reporters of a news website facing state-enforced closure to reinvent themselves as bloggers, rejecting allegations Manila was cracking down on the free press. 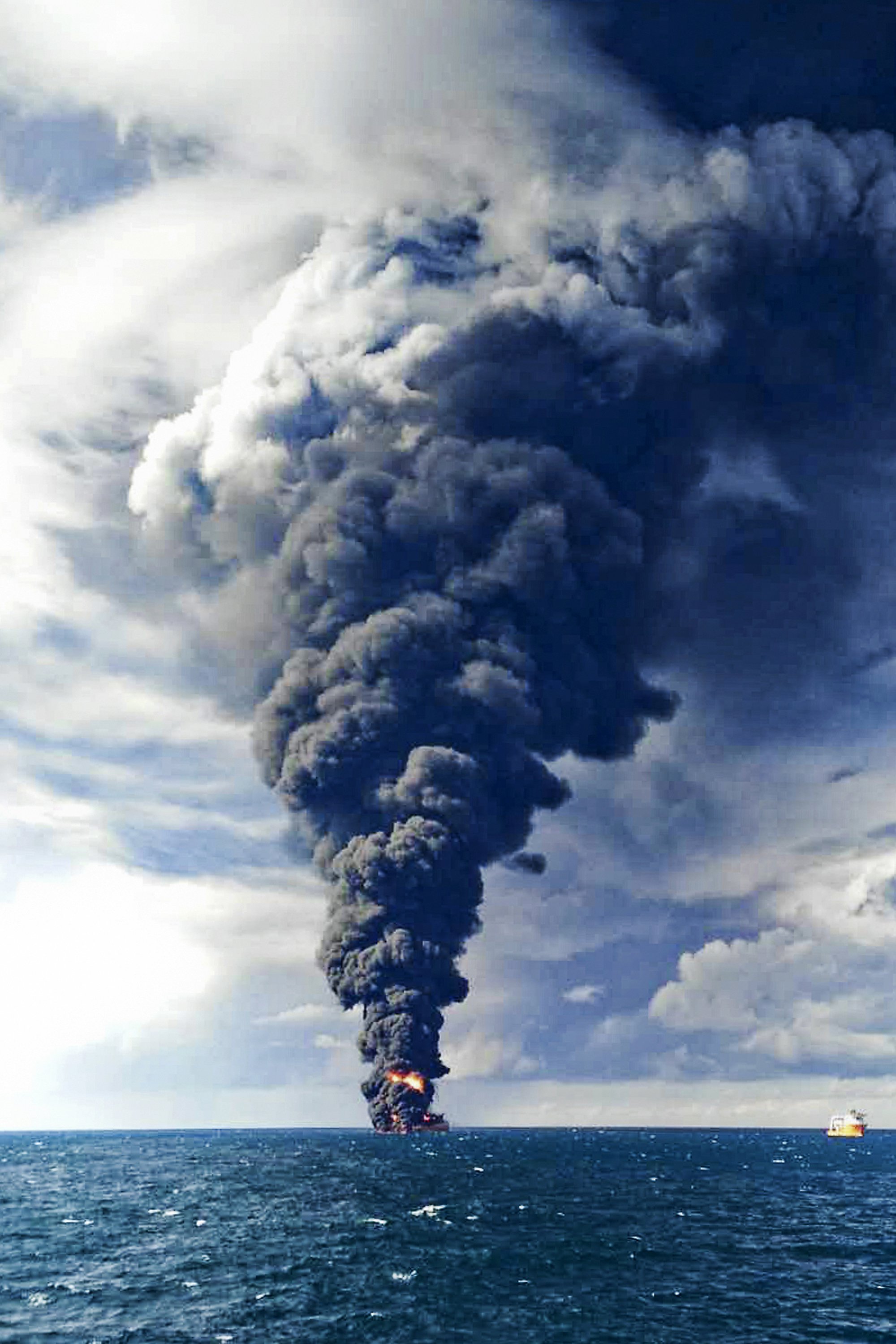 7) Oil Explosion, South China Sea: Smoke rises from the burning Iranian oil tanker Sanchi in the East China Sea off the eastern coast of China in this image taken on January 14 and provided by China's Ministry of Transport. The fire from the sunken Iranian tanker ship in the East China Sea has burned out, a Chinese transport ministry spokesman said Monday, although concerns remain about possible major pollution to the sea bed and surrounding waters. 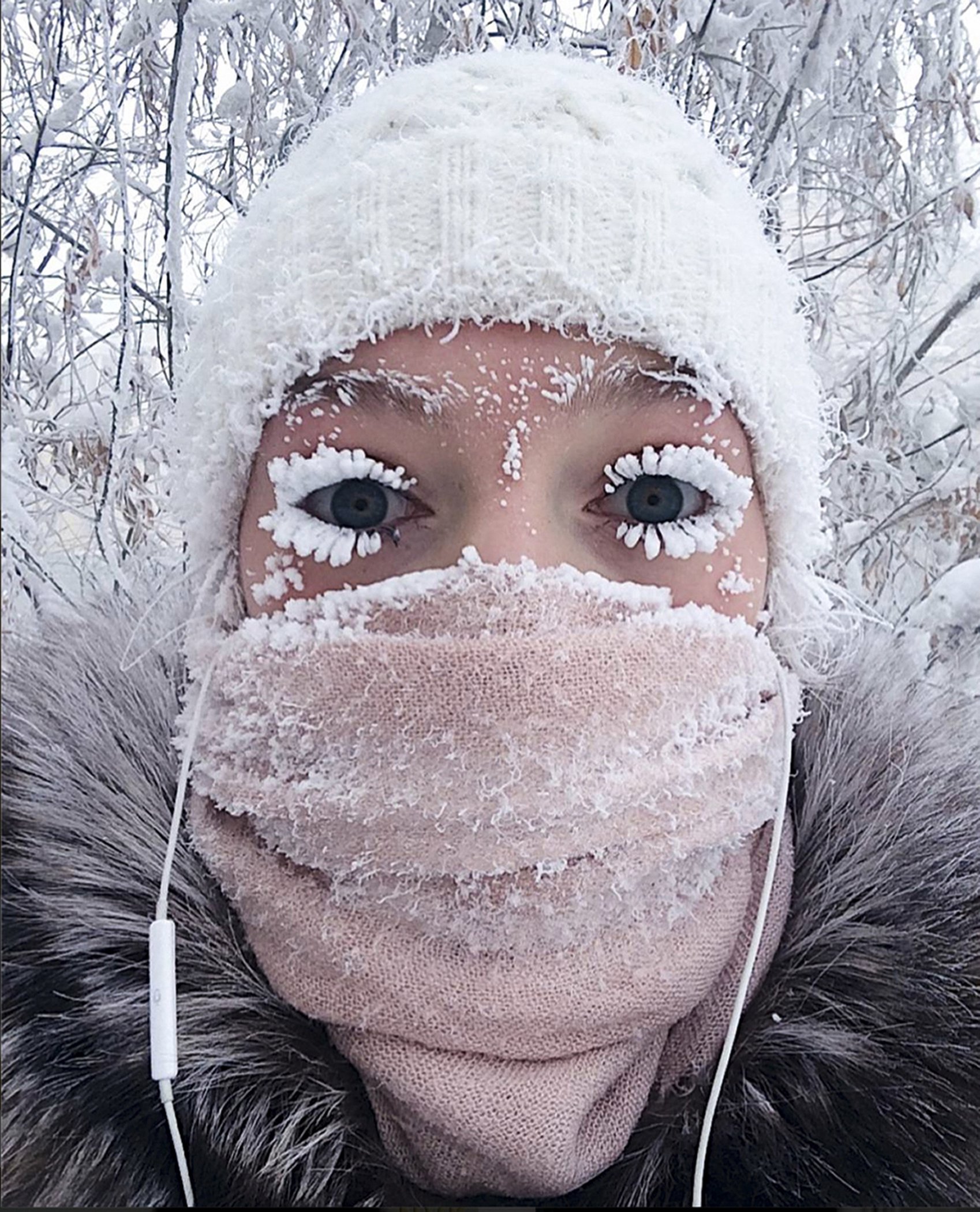 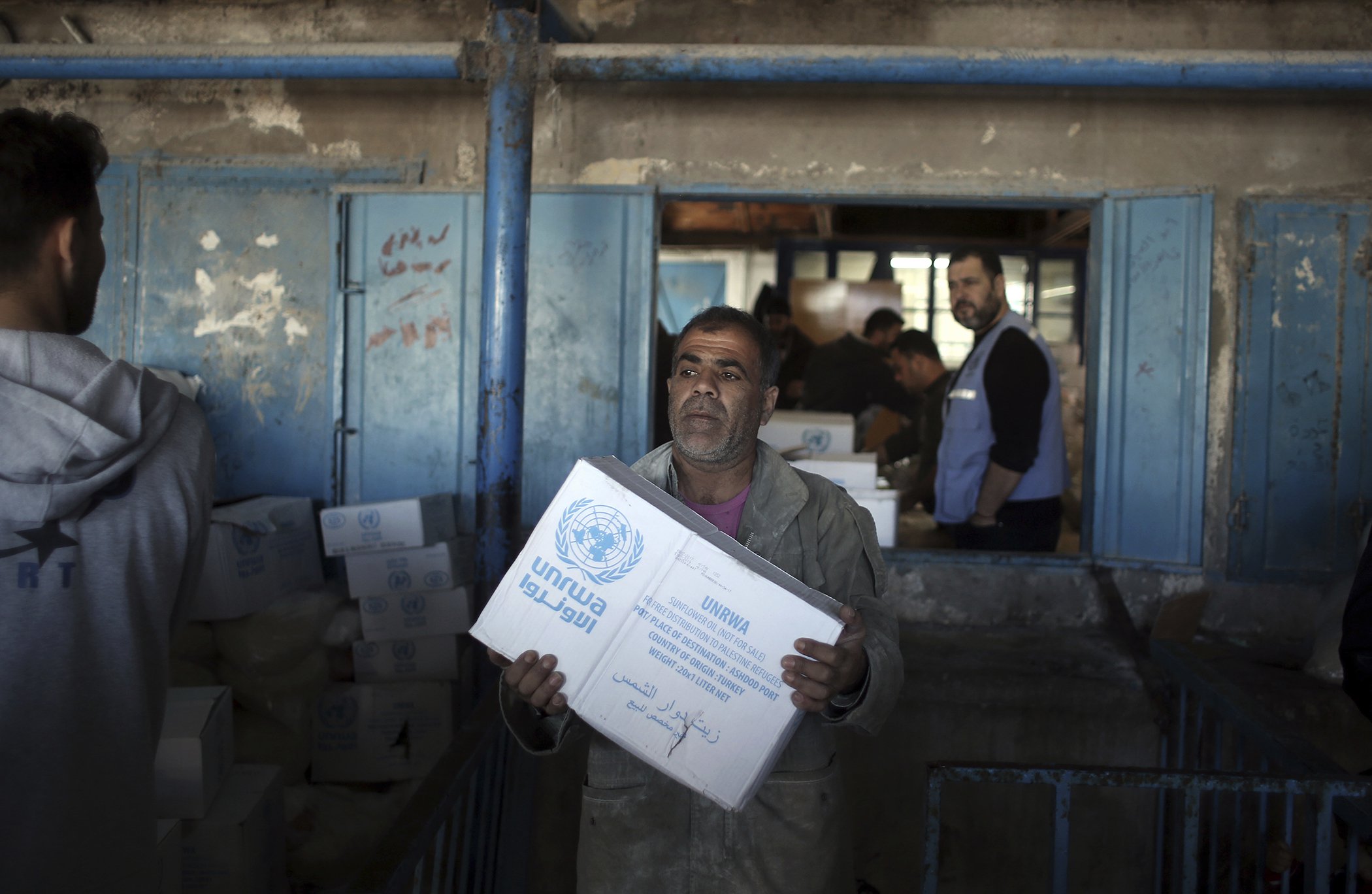 11) Trump Cuts Funding for UN Relief and Works Agency: Palestinians receive food aid at a U.N. Relief and Works Agency warehouse in the Shati refugee camp, Gaza City on Jan. 14. From the Gaza Strip to Jordan and Lebanon, millions of Palestinians are bracing for the worst as the Trump administration moves toward cutting funding to the U.N. agency that assists Palestinian refugees across the region. The expected cuts could deliver a painful blow to some of the weakest populations in the Middle East and risk destabilizing the already struggling countries that host displaced Palestinian refugees and their descendants. 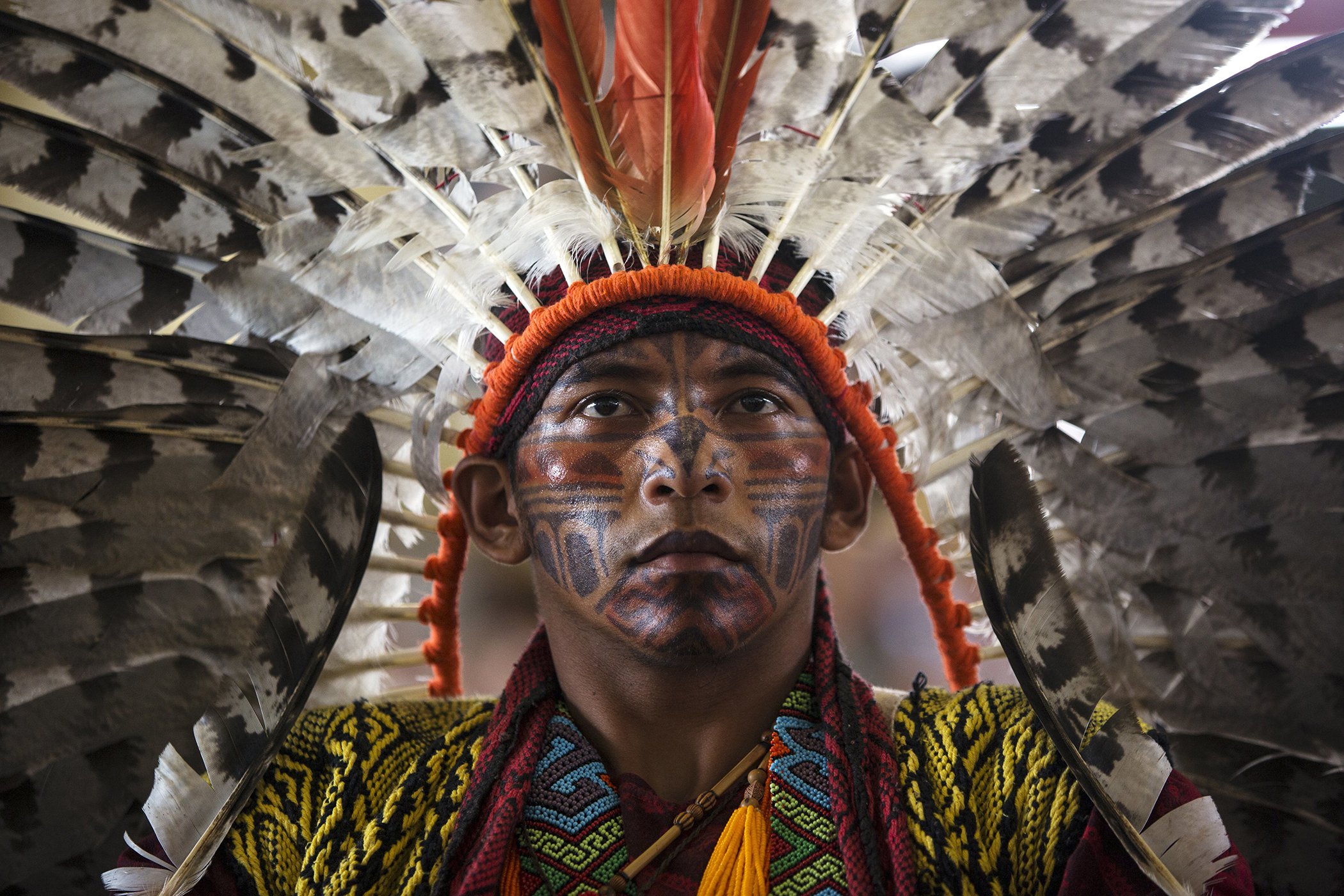 12) Pope Francis Visit to Amazon: Hunikui Antonio Borges, from Acre, Brazil, listens to a speech during a congress of Amazonian indigenous, in Puerto Maldonado, part of Peru's Madre de Dios region in the Amazon, one day ahead of Pope Francis' arrival on Jan. 18. Francis will meet with Amazonian indigenous groups who are hoping he will call on the state to grant them formal land rights and encourage the government to support the cleanup of rivers and land spoiled by illegal mining and deforestation.

13) Lion Cubs, Wildlife Sanctuary: Three new lion cubs play in their enclosure following their return home to the Wildlife Waystation animal sanctuary, after they were evacuated during the recent Creek Fire, which burned part of the property in Sylmar, California, on Jan. 17.

14) Turkey Sandstorm: A picture taken on January 19, 2018 shows a general view of Diyarbakir city during a sandstorm on Jan. 19 in Diyarbakir, Turkey.

TopicsWeek in PhotosPhotosPhotos of the WeekWeek in ReviewThe week in photos
Ash plumes rise from the volcano on Kadovar Island, Papua New Guinea in the South Pacific on Jan. 16, 2018.
Brenton-James Glover/AP