'The green economy is the only chance we've got of paradise.'

Whether it’s through fashion or protest, Vivienne Westwood is not a woman afraid of making a statement.

On 23rd May 2017, she rocked up to the residence of the Archbishop of Canterbury in London with a special guest — the Grim Reaper — to issue a strong statement on the Church of England’s position on fracking.

The Queen of Punk delivered a report entitled "Whitehall’s Fracking Science Failure", which criticises the Church for declaring fracking “morally acceptable,” and for its apparent support of the government’s stance on the fracking industry.

Read More: The First OffShore Wind Farm in the US is Putting Dirty Energy out of Business

Fracking is the technique used to extract gas from shale rock by injecting water at high pressure. In October 2016, the government controversially overturned objections to a fracking proposal in Lancashire, and gave the go-ahead for energy company Cuadrilla to explore the potential of fracking in the local area.

Opponents to fracking argue that the process can contaminate water supplies, damage the countryside, trigger earth tremors, and that fundamentally, it perpetuates a dependence on fossil fuels at a time when the world needs to switch to renewable energy.

“Fracking kills, and it poisons the whole land,” Westwood told Global Citizen. “The majority of people in England are against fracking.”

According to a YouGov poll from October 2016, she's right. Fracking is deeply unpopular in the UK. Only 37.3% of those polled supported shale gas extraction.

Still, the government argues that fracking can be delivered safely and that emissions from shale gas would be lower than coal if conducted within official regulations. 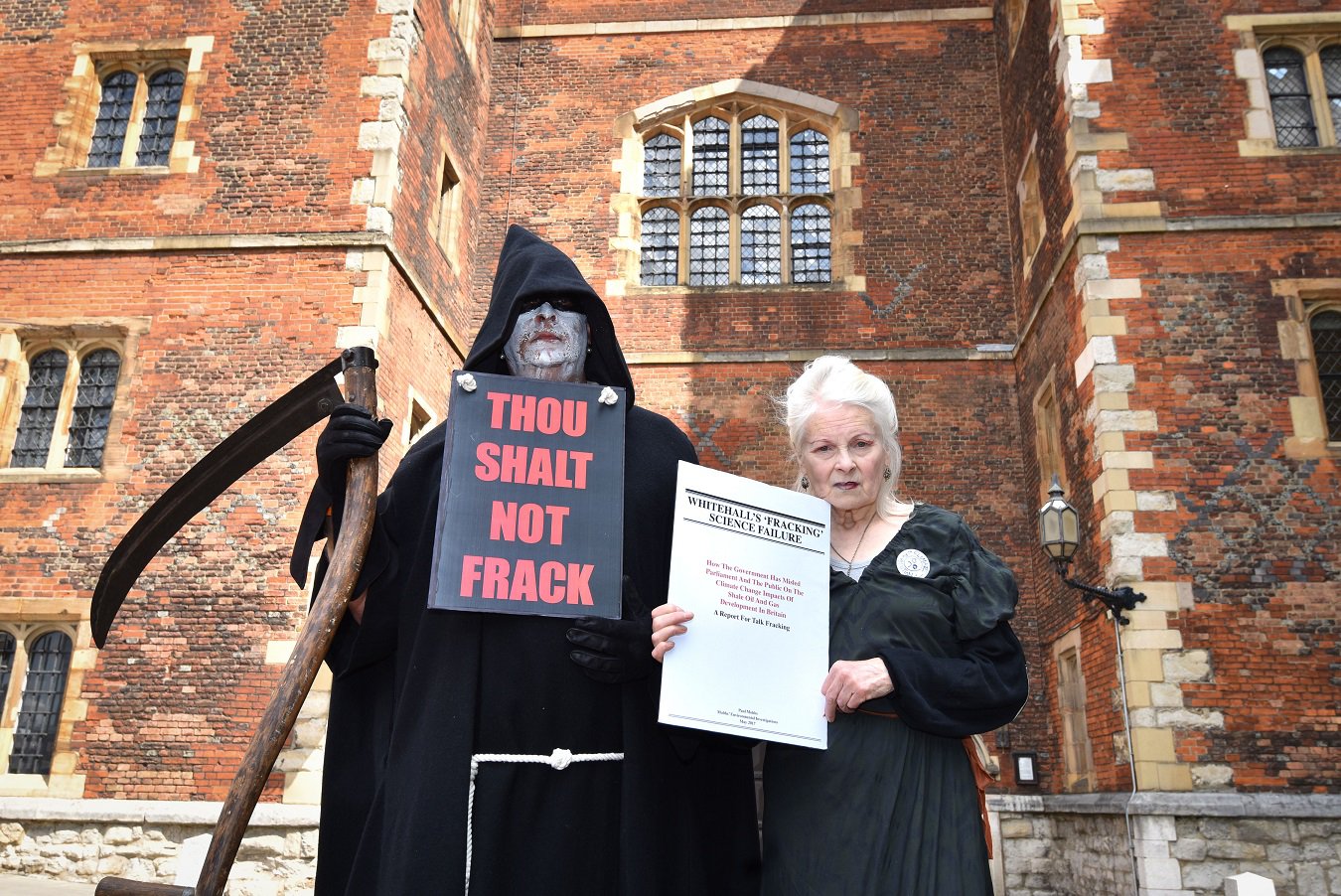 The report delivered by Westwood, on behalf of Talk Fracking, challenges the government’s research, stating that it contained outdated evidence that underestimated potential methane emissions.

“The position that fracking is cleaner than coal and can help us bridge to a renewable energy future whilst helping us reach our climate change reduction targets is a complete falsehood,” the report says, calling for a complete moratorium on fracking in England. Both Scotland and Wales have declared a moratorium on fracking due to concerns about its negative environmental and health consequences.

As the Church owns swathes of land across the country, Westwood warned of its responsibility to prevent environmental degradation. In 2015, the Church of England decided to divest from the two most polluting fossil fuels — thermal coal and tar sands. Yet its recent decision to “tentatively back” fracking has left many disappointed.

Appearing alongside the Grim Reaper is a dark symbol, but one that captures Westwood’s daring spirit — a rebellious attitude that extends from her eye for unconventional frocks on the catwalk to her outspoken defence of the planet and its inhabitants. As well as fighting fracking in the UK, she is a longstanding supporter of Cool Earth, which works with indigenous peoples to halt rainforest destruction.

“We have to save the world from climate change,” she said. While campaigning at a political level, Westwood also believes individuals can take immediate practical action to start a climate change revolution from within their own homes.

“In all my time as an activist, I explain the problem and people say what can we do. It’s the first time I’ve found an answer. Switch to green energy. That’s something you can do. It will completely undermine the rotten financial system that we’ve got. It will really bring in the green economy. The green economy will save us. The green economy is the only chance we’ve got of a paradise.”