The globe marched for climate action, did they hear us?

On the eve of the Paris Climate Change conference (COP21) 170,000 Australians joined hundreds of thousands of people from around the globe and marched together demanding action to ensure a safe and fair climate for all.

The conference is currently underway and Australians are eagerly waiting to hear if world leaders will commit to a new and binding agreement to radically reduce carbon emissions and prevent a temperature increase beyond 2 degrees Celsius. On our current trajectory global warming will see temperatures increase way beyond this, which will have a catastrophic impact.

So, what is Australia bringing to the table?

Australia has committed to reducing emissions by between 26 - 28 per cent of 2005 levels between 2020 and 2030. Compare this to other countries and it’s obvious we should be aiming higher. To put it in context the US is committing to reduce levels by 41% and the EU by 34%. Oxfam are calling for the Australian Government to reduce domestic emissions by 65% by 2030.

Our recent Australian government disappointed us with their severe lack of ambition when it came to taking action against climate change. Will it be any different with our new Prime Minister?

One of the issues on the table at the summit will be the Green Climate Fund. The fund is crucial in helping developing countries to adapt and mitigate against further impacts of climate change.

Australia’s closest neighbours in the Pacific are already feeling the effects of a warming globe. Rising sea levels mean people living in low lying islands such as Tuvalu are being displaced. In Vanuatu 80% of the population rely on subsistence agriculture to survive. Unpredictable weather patterns, decreasing rainfall, and changing seasons are affecting crops, meaning small-scale farmers can’t make a living or feed their families.

In March this year the world saw just how at risk Vanuatu is to extreme weather, when the most powerful cyclone in the region, Cyclone Pam, hit its shores. No one can ever truly prepare for such a disaster but efforts from communities, local government and NGO’s meant they were able to prepare, adapt and recover.

Many people in climate affected areas are already adapting. In places such as Kiribas and Tuvalu they are planting mangroves to combat soil erosion, planting drought resistant crops and installing water tanks to collect rainwater as the rising sea levels contaminate the groundwater. 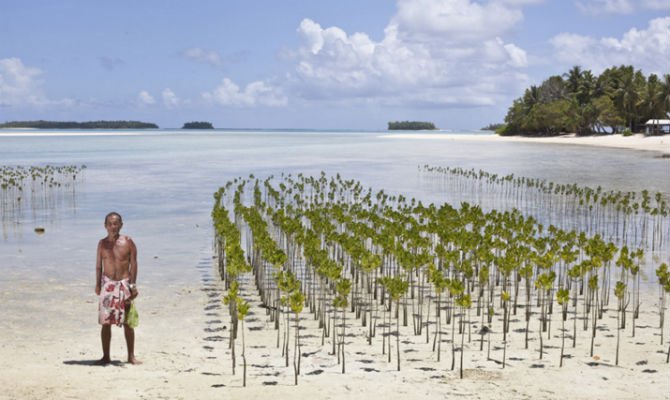 World leaders will be urged to up the ante and make significant contributions to the Green Climate Fund this week in Paris. It was only after huge international pressure, that our previous Prime Minister Tony Abbott did a backflip and begrudgingly announced he would commit a measly $200m to the fund. The Australian Council for International Development was deeply disappointed by this announcement. The CEO Mr. Marc Purcell said "this announcement lacks any ambition." Plus, this money was actually taken from Australia’s already depleted foreign aid budget. The Climate Institute said Australia’s contribution was about $350 million short of fair. It is now up to the Turnbull government to increase our contribution to the fund.

With our aid budget at a record all time low, our Prime Minister announced in Paris this week that Australia would contribute a small portion of the budget towards helping developing countries adapt. The slight increase is embarrassing compared to countries such as the UK, Canada and Germany.

As one of the biggest emitters of greenhouse gas per capita and the wealthiest country in the region, Australia has a responsibility to assist our closest neighbours, who are increasingly vulnerable to climate change, in becoming more resilient.

So far it looks as though Australians will be disappointed again. Didn’t they hear us the first time? The vast majority of Australians want to see a commitment to significant climate pollution cuts. For our environment, our future generations and those living on the frontline of climate change in developing countries. We want real action now!

You can go to TAKE ACTION NOW to call on world leaders to adopt 100% renewable energy.