The Conversation You Didn’t Hear at The RNC

Back from the Republican National Convention and eager to transform global health. 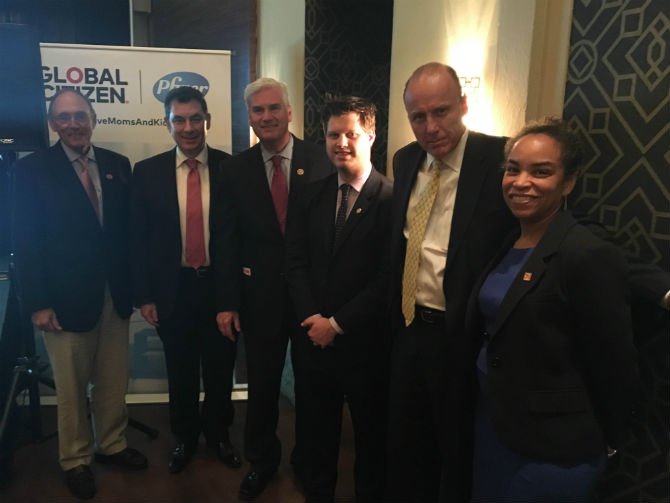 This article is brought to you in partnership with Pfizer.

The Republican National Convention took place between July 18 and 21. It was covered by the every news outlet, and sparked global discussion on all types of issues. Global Citizen and Pfizer were able to engage in one the most important issues that you might not have heard about during the Convention — global health.

Choosing to call attention to global health challenges, we were reminded of the progress made and work still to come in eradicating polio and providing lifesaving vaccines to the world’s poorest. In partnership with Pfizer, Global Citizen hosted a panel event, bringing together prominent health and development sector professionals and Members of Congress to discuss how the U.S. can do more to improve global health.

After an engaging discussion on global health, Congressman Dr. Phil Roe of Tennessee and Congressman Tom Emmer of Minnesota were invited to respond to follow-up questions and comment on their own work to improve global health.

The conversations were nothing less than inspiring and encouraged renewed action from both the private and public sectors ahead of the upcoming U.S. presidential election. Discussing everything from women’s undeniably critical role as health providers in remote areas to the sheer cost-effectiveness of vaccines in the U.S., speakers agreed that global health and foreign aid must be a key pillar of any foreign policy agenda.

Congressman Tom Emmer of Minnesota shared a personal perspective when he spoke to the urgency of renewed American leadership on foreign assistance. “Until you travel the world and understand what these dollars do, you really aren’t able to put it in perspective,” Congressman Emmer said upon sharing the impact of a trip to Ethiopia where his previously critical views on U.S. contribution to foreign aid changed. Now, he fondly recalls the trip as a bit of an epiphany. The importance of eradicating polio once and for all was also part of the discussion.

Congressman Dr. Phil Roe of Tennessee recalled the fear his own parents had of the virus infecting him or his siblings while growing up in rural Tennessee. Since then, the rapid progress made to reduce polio since 1988 is unprecedented. Now, Congressman Roe feels tremendously privileged to know that his grandchildren “will never have to worry” in the same way. It’s just as Michael Sheldrick said, “Polio has been reduced by 99.9%, proving that the impossible is possible.”

If you’ve ever wondered whether talking, tweeting, or calling your representative makes a difference we heard answers about that at the panel discussion. The message was clear: increased government funding to reduce child and maternal mortality rates, improve access to vaccines, and end polio once and for all only happens when global citizens make their voices heard to their local representatives.

Today I joined a @GlblCtznImpact panel. Elected officials need to care more about people than their next election. pic.twitter.com/pBpjXZpcvA

Congressman Emmer called on his peers in D.C. to “care more about people than their next election” and urged global citizens to keep “harassing” their representatives on the Hill for meaningful action on the issues that matter most.

As a global citizens, it’s imperative to hold a shared vision for the future that is prosperous for all. Yet not everyone at the Convention agreed. Some present at the Convention were still more interested in isolation than unity saying things like, “we’ve got to make these investments in our own backyard.” Fortunately, there are others, like Congressman Emmer who stand against these ideas.

“The entire globe is our backyard,” said Congressman Emmer. And we really couldn’t agree more.