The Colorful History of the Rainbow Pride Flag

Because have you heard of Gilbert Baker, the "Gay Betsy Ross?" 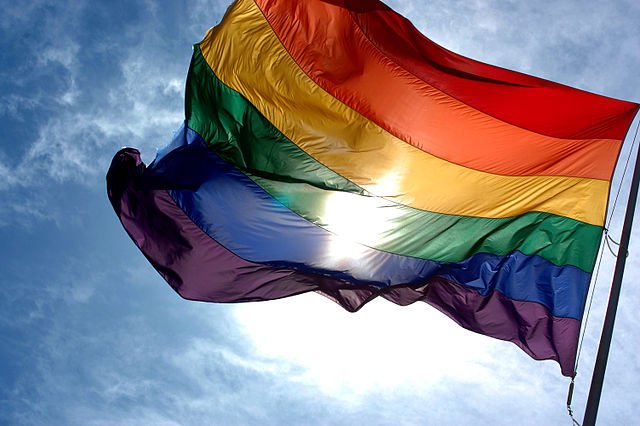 Most Americans learn about Betsy Ross, the woman credited with creating the US flag, but how many have heard of the legacy of Gilbert Baker, the “Gay Betsy Ross?”

Gilbert Baker truly embodies the term “behind the scenes.” He taught himself to sew in order to dress like David Bowie in the 1970s. Little did he know how those skills would come in handy when he set out to create the iconic global LGBT rainbow Pride flag.

Take Action: Stand Up For Refugees

“I got my first sewing machine in 1972, when I got out of the army,” he told In the Life Media in 2009. “I just had to dress like David Bowie every second of the day. Of course, I had no money to buy clothes so I thought, ‘I’ll make my own clothes.’”

Baker’s talents for sewing gained traction among his activist friends and the LGBT community in San Francisco during the 1970s.

“It was a time of incredible empowerment, political organizing, community building, and artistic expression,” Baker said.

Another activist, Charley Beal, said that friends in San Francisco’s LGBT community would call up Baker when they needed a banner for a march or rally because he knew how to sew.

Prior to Baker’s creation the rainbow Pride flag, which is now recognized globally as the top LGBT symbol, a pink triangle was used by to represent the LGBT community.

The pink triangle, however, has a gruesome past.

An upside-down pink triangle was the symbol that the Nazis placed on homosexual men during the holocaust. It was one of several categories to mark prisoners in Nazi concentration camps during WWII.

During the 1970s the pink triangle was reclaimed by the LGBT community. Organizations like the AIDS Coalition to Unleash Power (ACT UP) used the symbol. But others, like Baker, couldn’t shake the association with persecution and murder of gays, and the holocaust.

“There was still something about it that was still fundamentally depressing,” activist Cleve Jones said.

So on June 25, 1978, Baker, then 27, created the rainbow flag for the LGBT community. He said the colors of the rainbow came naturally.

“I didn’t even think twice about what the flag would be, a rainbow fit us,” he said. “It connects us to nature, to all the colors of sexuality.”

Each color carried its own meaning; pink for sex, red for life, orange for healing, yellow for sun, green for nature, turquoise for magic, blue for peace and purple for spirit, according to the New York Times.

Baker, along with volunteers, pieced together fabric for the first few flags ahead of a gay rights rally in San Francisco at the Gay Community Center. He said the first flag was made from beautiful vibrant colors and thin organic material that “lasted about a week.”

“It needed no explanation. People knew immediately that it was our flag,” Cleve Jones, a friend and activist, told the New York Times in March.

Read More: Straight Men Are Holding Hands in LGBT Solidarity in the Netherlands

Later, as Baker and others began producing more flags, pink and turquoise were removed because they were too expensive, he told the New York Times. By the 1980s the six-color rainbow flag we see today was flying high.

“Together, we’re changing our world, our planet, from a place of hate and violence and war to a place of love and diversity and acceptance,” Baker said.

Baker died this year on March 31, and will be remembered during a rally in New York and worldwide on June 14.

Today, Google honors what would have been Baker’s 66th birthday with a Google Doodle recreating the piecing together of the original eight strips of fabric into the rainbow Pride flag.

Thanks to Baker, the flag remains free to replicate and use all over the world.

For people in regions Russia, Uganda, and 72 other countries where gay marriage is illegal fight for equal rights, the rainbow flag is used as a symbol of hope.

“It was his gift to the world,” Jones said. “He told me when the flag first went up that he knew at that moment that it was his life’s work.”