The exchange program aims to empower teen girls to break down cultural barriers.

Twenty-seven tech-savvy teenage girls from the Middle East and North Africa are having the time of their lives in the U.S. right now, proving their math and science chops and setting an example for girls around the world.

Hosted by the U.S. State Department and Legacy International, the young girls (who range between 15 to 17 years of age and hail from Algeria, Egypt, Jordan, Lebanon, Morocco, the Palestinian Territories, Yemen, and Tunisia) are currently working side by side with American teens and leaders in the tech industry at the fourth annual TechGirls exchange program in Washington, D.C., and at Virginia Tech in Blacksburg, Virginia.

The exchange program aims to engage, inspire, and empower a new generation of women and girls in the science, technology, engineering, and math fields, according to Mara Tekach, U.S. deputy assistant secretary of state for professional and cultural exchanges.

“[They] are developing a foundation of skills, experience, and networks that can lead to higher education and future career opportunities,” Tekach tells TakePart. “Upon returning home, alumnae influence hundreds more students to become TechGirls and promote a positive vision for their countries and the region.” 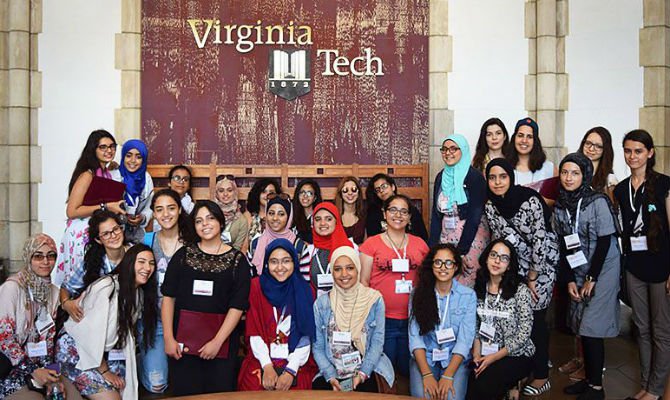 So far, the girls have attended iD TechCamp, an interactive technology and computer camp at American University; worked on community service projects; and had mentoring sessions with some of the top leaders in the tech industry. An array of private companies and tech organizations are involved in this year’s exchange, including Girls Who Code, the Federal Communications Commission, and Facebook.

The program was launched four years ago, and to date, 80 TechGirls alumnae have shared their skills with more than 2,000 girls in their home countries, led conferences, and gone on to study at some of the world’s top universities.

“Not only did I acquire a rich knowledge of technology thanks to the intense academic training, but I found myself immersed in an extraordinary atmosphere, full of things to learn, challenges to overcome, and new thoughts to explore,” says 16-year-old Imane Baha of Morocco, who also attended last year’s program.

Back home, says Baha, the experience didn’t end, as she found that many of her peers were interested in what she had learned.

“It’s mainly because of the rising consciousness among Moroccan girls about the importance of technology in the development of society, and the lack of mentors and technology learning resources for my peers in the region I live in,” she says. “Technology offers us an opportunity not only to express ourselves in different ways, but in new ways, and this progress is crucial for women in my country.”

The Middle East and North Africa might be a particularly attractive place to recruit, as girls in both regions typically perform better in math than boys at the primary and secondary school levels, according to the No Ceilings initiative, funded by the Bill and Melinda Gates Foundation and the Clinton Foundation. The number of young women across the Middle East pursuing an education in STEM-related fields has also been steadily increasing, according to a report by The Economist. In Saudi Arabia, 73 percent of bachelor’s degrees in science in 2010 were given to women. A decade earlier, only 40 percent of students studying in the sciences were female, according to the report.

However, there’s a big difference between studying in STEM fields and actually pursuing a career or higher education in them. In Saudi Arabia, just 34 percent of those seeking a master’s degree in science are women, and only 29 percent are in Ph.D. programs. And while the world average of women working as researchers is 30 percent, less than 10 percent of researchers in Saudi Arabia are women, the report reveals.

For many of the girls, the program serves as an affirmation that they can pursue what they love.

“I think that tech can take me anywhere I want to go,” says 16-year-old Rowaa Azzam, a participant from Egypt. “It’s just like a vehicle that I can ride to fancy places. I can connect with people all over the Earth, [and it] gives me the opportunity to imagine.”

“I’m really having a lot of fun,” adds 16-year-old Laureen Abu Shammah from Morroco. “It made one of my dreams come true. Visiting famous companies like Facebook was always a dream to me, and academically it improved my skills in programming and software.”

Shammah says she loves technology because it has allowed her to find herself and often lifts her up when she is feeling sad.

“I realized that I found my passion,” she says. “Technology takes you to another world; it saves effort, time, and money. I’m amazed by technology because it can make people happy. For example, I talk to my uncle abroad by the new devices, and I really feel delighted when I can reach him. I’m also in love with the magical parts about IT. You can’t see what’s happening behind the scenes and the perfect connection between the computer hardware and software, just like the body and the brain.”

Indeed, across the globe, being a computer nerd appears to know no bounds. Maram Abu Hussein, 16, a participant from Jordan, says she used to “count down the days” to her computer class at home and can’t wait to return home to teach coding to other girls in her country. And 15-year-old Fatima Moawiya from Lebanon says she has been interested in all things technology since she was eight years old.

Many of the girls were also inspired by their time with American teenagers and their freedom of expression. “They have self-confidence, and they also share their thoughts and beliefs,” says Azzam. “Besides the technical skills that I will be taking back home, I would like to bring self-confidence and belief in [ourselves] to teen girls in Egypt.”

Each of the girls recognizes how her experience can benefit girls in her home country and around the world. Fifteen-year-old Rasha Al-Khateeb from Jordan says she plans to return home and teach her own classes in JAVA and processing, and to promote the TechGirls program to anyone who’s interested.

And, of course, there’s the self-esteem boost.

“I also believe that some women are born leaders,” says Shammah. “I want to make a change in this world and be an inspiration in other people’s lives.”

Contributed by David McNair, an award-winning reporter and editor based in Charlottesville, Va. He runs the hyper-local news site The DTM and his fiction has appeared in Virginia Quarterly Review.