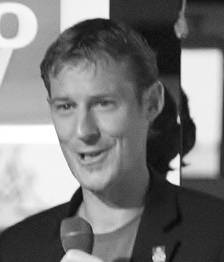 TB-themed flash mobs in Kyrgyzstan: How did I get into this?

Lunn explains working on out of the box projects to eliminate world poverty.

Growing up up on the Yorke Peninsula in Australia, I didn’t expect to be working on a tuberculosis-themed flash mob in western Kyrgyzstan. Yet, somehow that's exactly what happened.

For one thing, as a kid I didn’t know where Kyrgyzstan was, or even that it existed. I’d certainly never heard of tuberculosis (TB). I wasn’t even all that into dancing, and no one knew what a  flash mobs was, because they had not been invented yet!

My youth in Minlaton and Kadina revolved around religiously playing cricket in summer and footy in winter. TB had no meaning in my life then, but it certainly does now.

Fast forward to today, and 15 years of volunteering, working and learning in over 80 countries has taught me one essential thing: the only reason I didn’t face the threat of TB, polio or other preventable diseases growing up was because I won the lottery of life. I was lucky enough to be born in Australia on the Yorke Peninsula.

I’ve met many kids who aren’t so lucky, which is why I’ve committed to doing what I can to make sure any child born anywhere can have the same access to health, education and economic opportunity I did being born in South Australia.

This is how I found myself preparing for World TB Day (March 24) with a group of amazing staff and Red Crescent volunteers here in rural western Kyrgyzstan in the town of Jalal-Abad, perfecting our routine for a flash mob. I’m no expert in flash mobs, in Kyrgyzstan or otherwise, so I somehow felt at ease not knowing the strange music or moves and making a moron of myself!

On top of flash mobs through I'm with have also been visiting schools to share good health practices, meeting with health professionals and organising health promotion workshops.

We’re doing this because Kyrgyzstan has one of the most resistant strains of TB in the world. Globally, 9 million people get sick with TB each year, and about 1.5 million people die. One third of cases are not detected, and an astonishing one in three people living with HIV will die of TB. The diagnostic tools, treatments, and vaccines to tackle TB are inadequate. Drug-resistance is a continuous problem, especially in Kyrgyzstan where infected people were segregated from society and lumped together compounding the effects of the disease. This is why I’m working with volunteers to share some simple but effective practices to prevent the spread of the disease and allow TB patients to interact with society.

It’s not all bad news though. Since 2000, deaths from TB have dropped by 41% globally, and in Kyrgyzstan the prevalence of drug resistant TB has dropped. So too has the stigma attached to people living with TB, as the public better understands the disease, its prevention, and how they can proactively seek health care.

Much of this progress is thanks to the Global Fund to Fight AIDS, TB and Malaria. Since 2002, The Global Fund has provided 70% of global financing to fight TB and supported programs enabling 15 million people to access treatment for TB.

For my group In Kyrgyzstan, health promotion activities, like our flash mob, form just one critical component of creating a healthier, safer and more productive community and world.

This year, the Global Fund will be seeking contributions from donors, including my home nation Australia, to continue their life-saving work. TB may not be a big issue on the Yorke Peninsula, or anywhere in Australia, but 58% of TB cases are right on our doorstep in the Asia-Pacific region.

A contribution of $300 million from Australia will help The Global Fund save 8 million more lives by 2020. A significant sum of money, yes, but also one that goes a long way, with the Global Fund investing $10 in the region for every $1 we have contributed in the past.

So what can the average Australian do? The good news is you don’t have to be part of a flash mob in Kyrgyzstan. Instead you can talk to your neighbours, your friends and family to create a culture of Australians who care about a healthy world, everywhere, so a child can be born and not face threats we barely even know about anymore in Australia. You can talk to your MP and urge generous and vital Australian action to fight TB and other diseases.

I live by the idea of knowing my personal choices, decisions and actions have a positive impact on people and the planet no matter where I am. I ask, what might you do from Yorke Peninsula, or anywhere in Australia, for this World TB Day?

A version of thsi story was originally published in The Advertiser newspaper.