"I couldn't imagine I would reach [this level of success] in just three years." 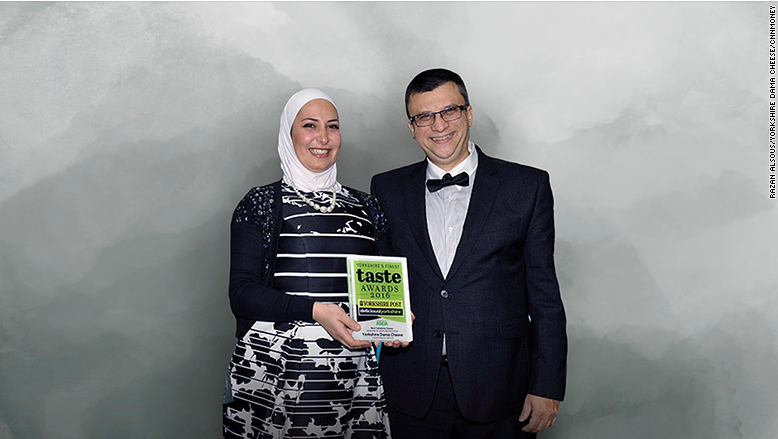 Razan Alsous was planning to start a pharmaceutical business with her husband in Damascus, Syria’s capital.

But then a bomb detonated outside her office, sending their aspirations up in smoke.

“I cannot see anything, I can see only dust,” Alsous recalled her husband, Raghid Sandouk, yelling  after the explosion in an interview with CNN.

Sandouk survived the blast, but it was the end of their life as they knew it. The couple made the difficult decision to take their three children to the UK to seek asylum.

Take Action: Rise to the Challenge And Take Actions to Support Refugees in Our Week Long Action Challenge​​​​​

Luckily the family left when they did. Since the conflict began shortly before the explosion at Sandouk’s office, hundreds of thousands of of civilians have been killed, and European countries alone have received almost one million Syrian asylum-seeking applicants. In January of 2017, the UNHCR counted almost five million registered refugees, while more than six million remain displaced within the war-ravaged country.

But their move to England wasn’t easy. While Alsous was granted asylum within a month of the family’s arrival, it took over two years for her husband to receive legal permission to live and work in Britain. To make matters worse, Alsous’ hard-earned professional qualifications were useless in England, so she had to find another way to support her family.

"Sometimes I was very down, I was very tired," recalled Alsous. "Having the kids, having no friends, no social life, nothing in this country, it's not easy."

Read More: This Refugee Is Using Free Online Education to Help Rebuild His Life — And Hopefully Syria, Too​​​​​​​

After a year-long long job search, she decided to take another risk. She started a cheese-making after noticing England's lack of Halloumi cheese which had been a Damascus staple.

She spent the next year testing out recipes in the kitchen, attempting to replicate authentic Syrian flavors with local English Yorkshire dairy. As she did more research on her new home’s economy, she became more confident that her product could fill a gap in the market.

Alsous consulted with an adviser at a local job center and eventually pitched per plan to a government program that funds entrepreneurs. The agency assigned her a mentor and granted her £2,500 ($3,150) to get started. Her brother-in-law stepped up and let her use the kitchen of a former chicken store that he ran.

"Without having this support we could not start," she said.

In 2014, just two years after her arrival in England, Alsous received a license to produce and sell cheese. Within a few days, she was selling Yorkshire Dama Cheese at a local food market.

And then the accolades began rolling in for “Dama,” her company name, short for Damascus.

The business is growing, and two employees have been hired from the local area https://t.co/qdFLUyoiir

Her perseverance and success caught the attention of David Cameron, the former prime minister, who then nominated Alsous to be an ambassador for International Women’s day 2015.

"When I started I always thought it was a really good idea," she said. "But I couldn't imagine I would reach [this level of success] in just three years."

Alsous’ success is still growing. She hired two employees and works with four distributors and sells her cheese internationally and across the UK. Princess Anne even visited to open the company’s upscaled headquarters.

"Behind you is a fire, so you are just running, and running,” Alsous said. “You are tired, but you keep running, and suddenly you find yourself in paradise.”

While Alsous and her family lost their home to a brutal civil war, they’ve found a hint of their past in an unlikely place: cheese.